Make a pen balance on its point and spin – using the power of magnetism! This is a fun science experiment for kids. 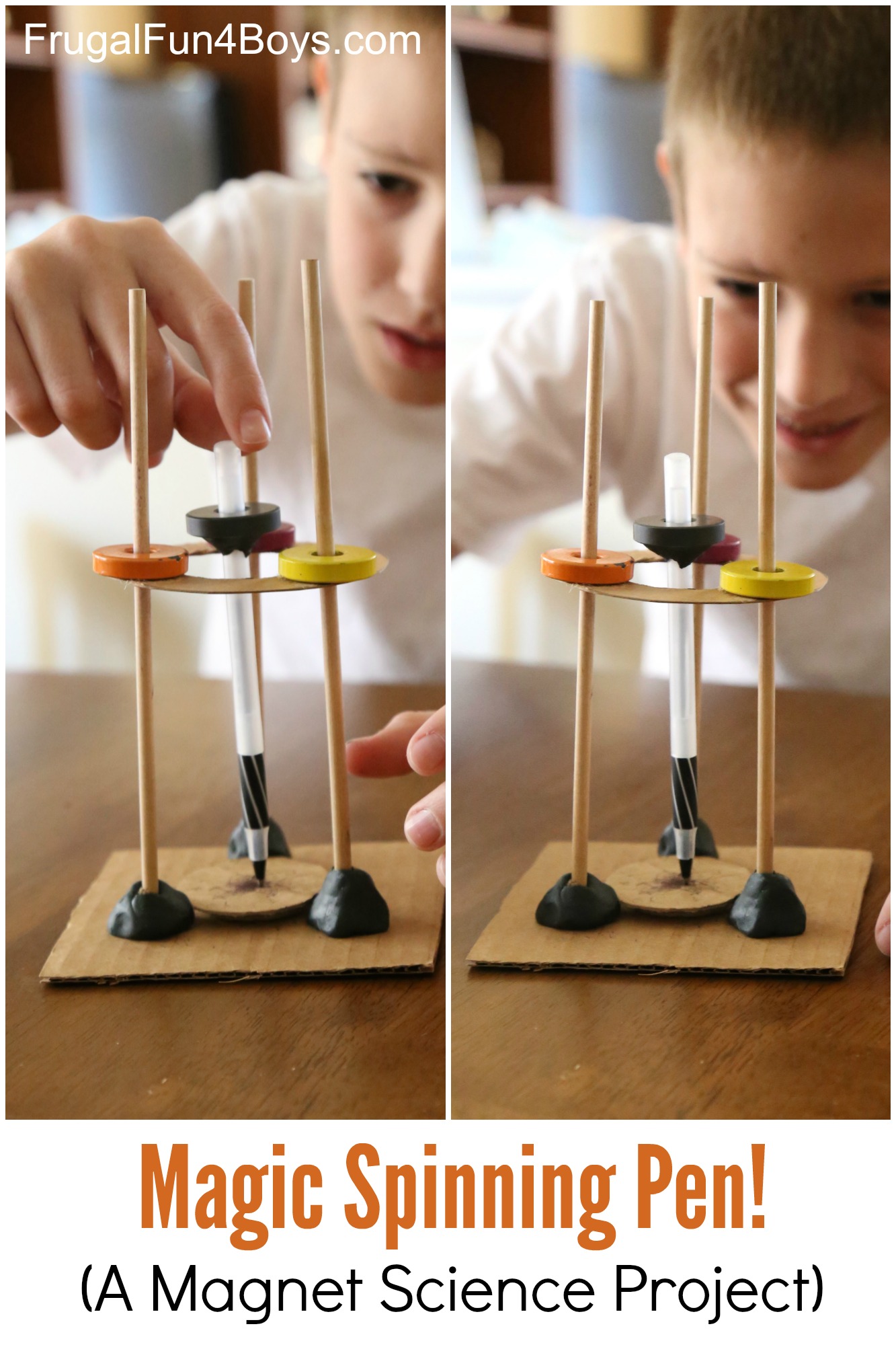 Magnets are just so fascinating! Playing and exploring with some fairly strong magnets is fun in itself. The middle two boys and I are studying magnetism in their science book right now (Exploring Creation with Chemistry and Physics), and I found this project on Pinterest and decided that we needed to try it! I had planned to just link to the instructions I found, but as it turns out there are some tips that you need to know to get this to work.

We found this project on arvindguptatoys.com. It’s a brilliant idea!

Recommended Age: This would be a great science demonstration for kids age 5+. Kids age 10+ (or so) would be able to set it up themselves and experiment with the variables involved in the design. Spinning the pen requires some coordination to keep from knocking it over. 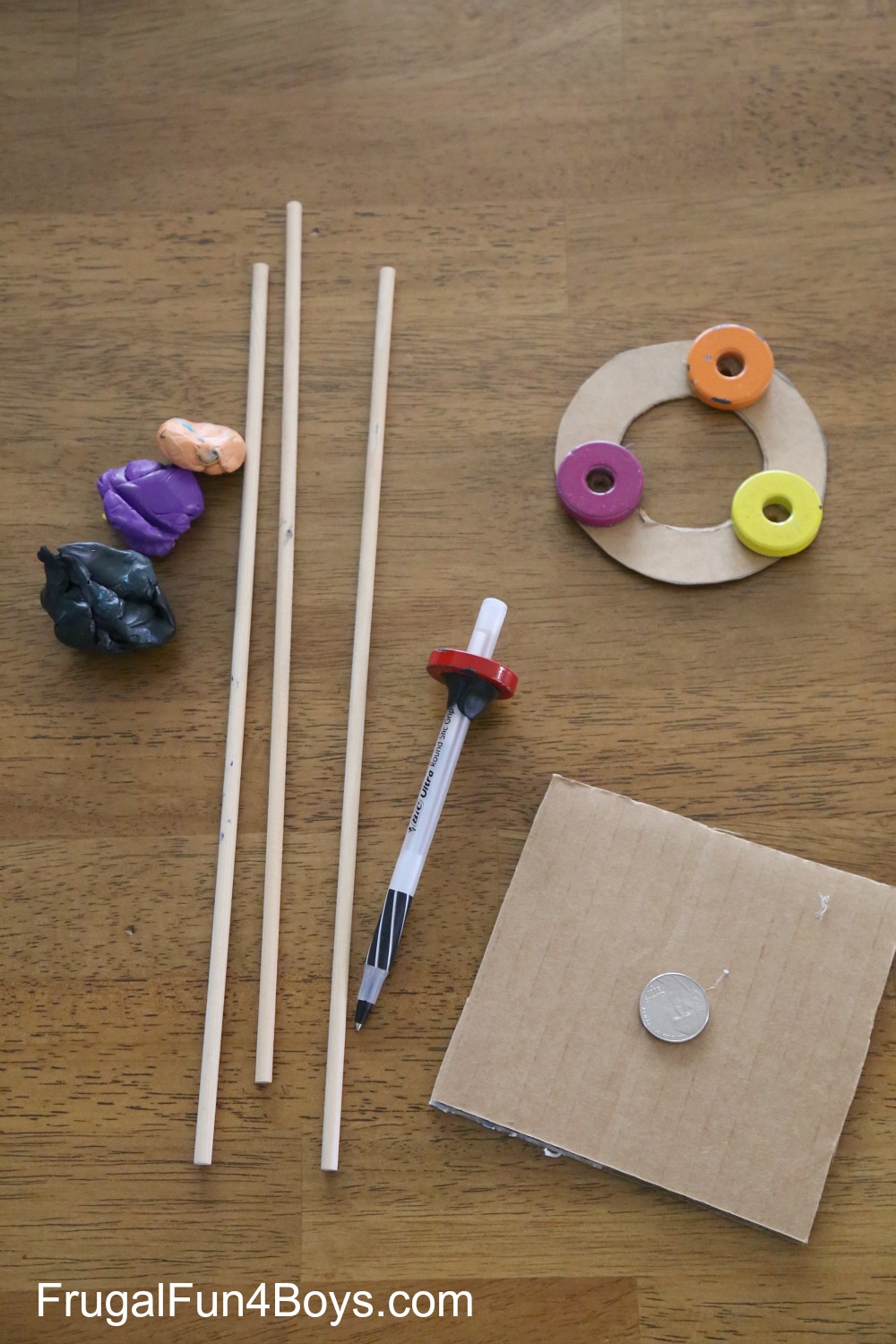 Here is what you need to create a spinning pen structure:

Step 1: Cut out a ring from the cereal box cardboard. We traced a large cup and then a smaller cup inside that one to get nice exact circle. 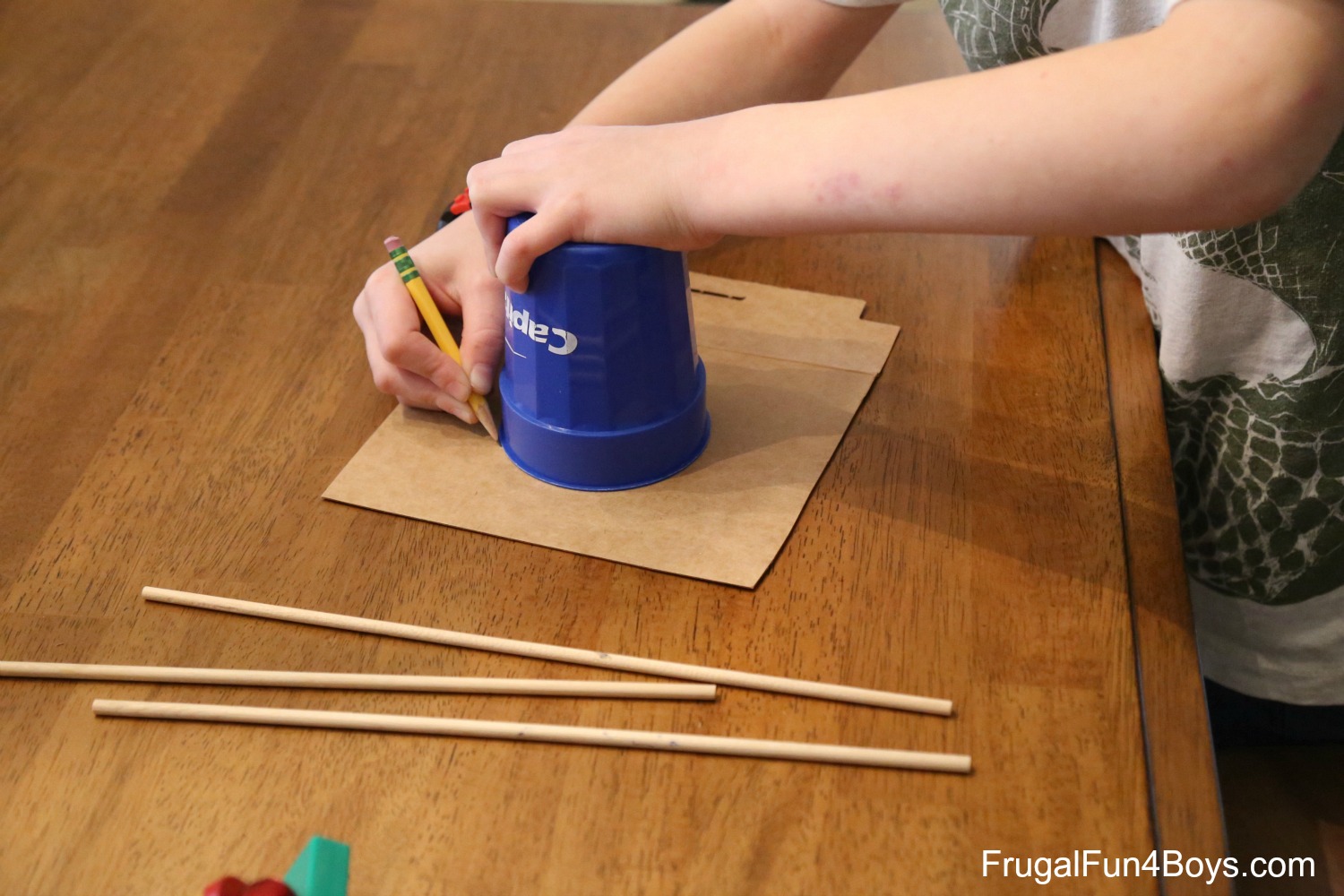 Step 2: Arrange three ring magnets so that they repel each other. We did this by placing the magnets on the table and sliding them toward each other. Make sure that each magnet repels the others.

Then hot glue the magnets to the cardboard ring (or attach them with a little modeling clay). Use something sharp (adult job!) to poke a hole through the cardboard in the middle of each ring. This will allow the dowels to slide through. You want the dowels to fit snugly, though, so that the ring won’t slide down. 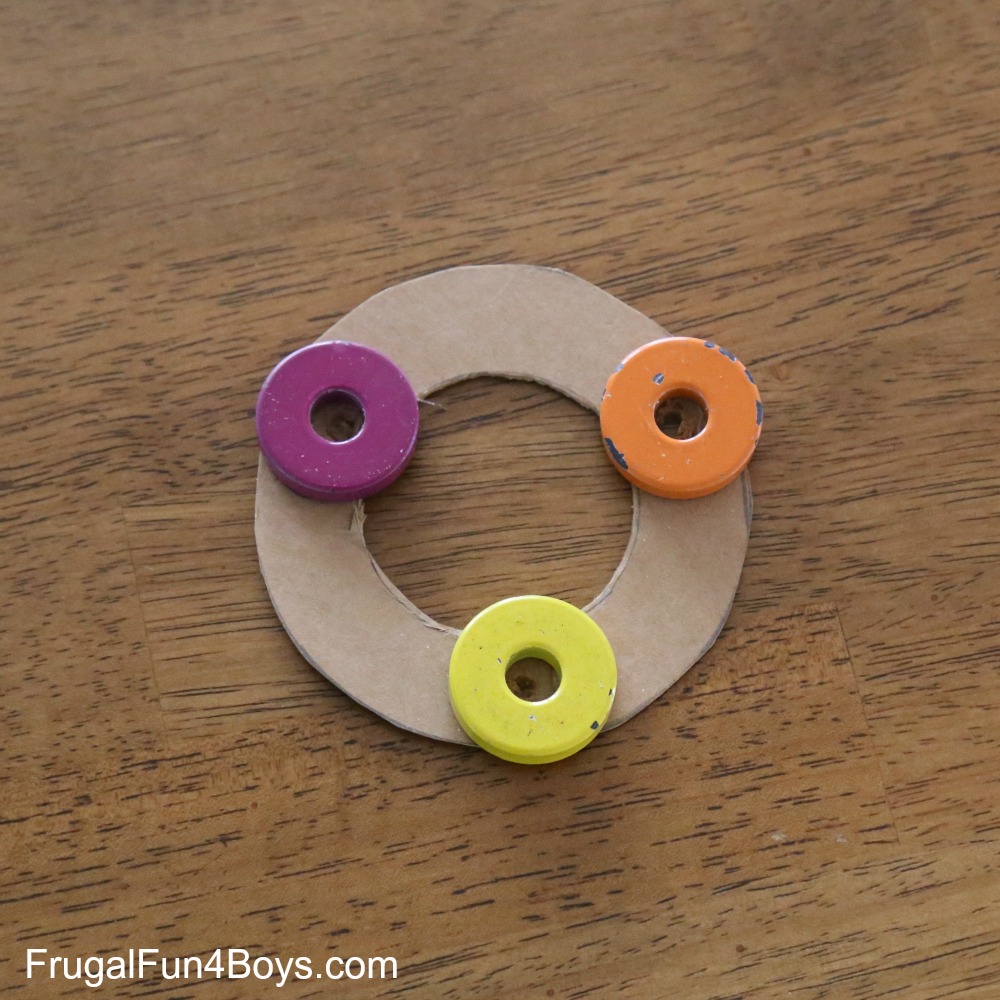 Step 3: Attach the dowels to the cardboard square with modeling clay. Slide the cardboard ring over the dowels. Then use some clay to attach the fourth ring magnet to the pen. This magnet should be positioned so that it is attracted to the other magnets.

The pen should balance in the center of the ring. Make sure the magnets are positioned so that each magnet is an equal distance from the pen – you want them all to pull equally. Once it’s balanced, give it a spin. It will spin for a long time! 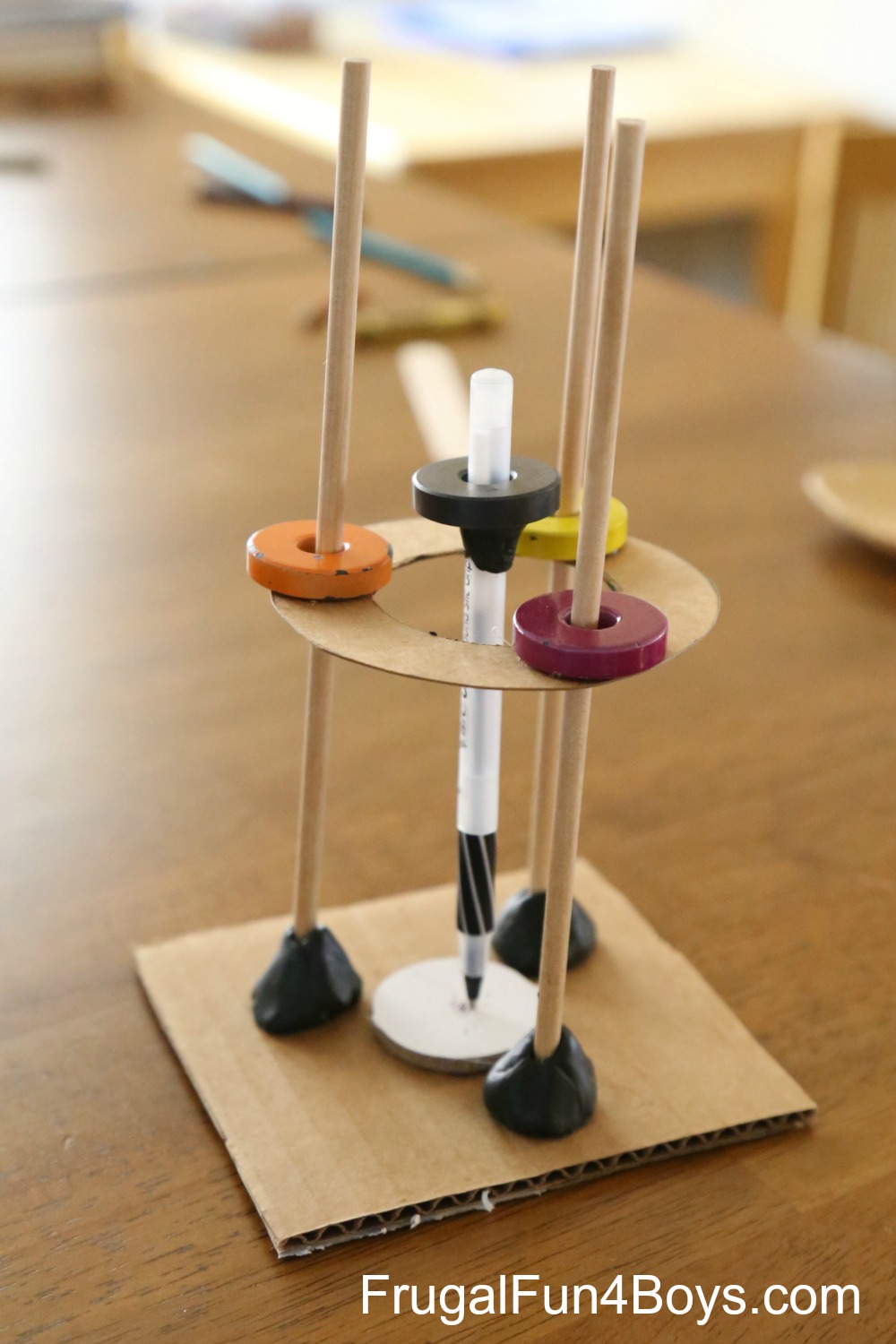 Getting our magnet contraption to work was not quite as simple as it looked on arvindguptatoys.com. Their instructions show all of the magnets at the same height, including the magnet on the pen. When we did that, this is what happened: 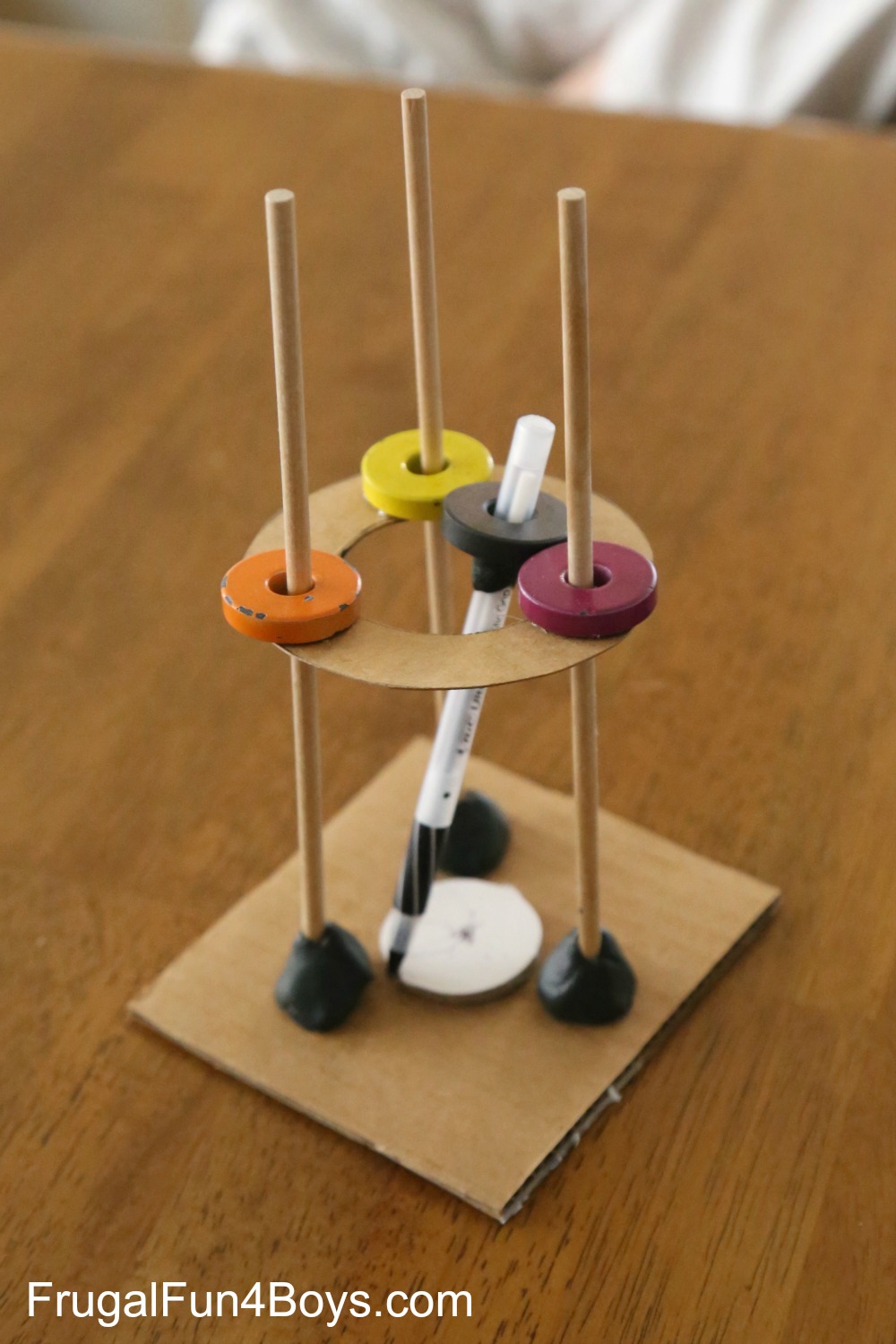 We fiddled and fiddled with it. We tried flipping over the ring magnet on the pen. Nothing worked! As a blogger, though, I know that people rarely post things online that just don’t work. It’s not worth the time (or the reputation) to write about bad ideas. So we kept at it! Finally we tried adjusting the height on the cardboard ring so that the magnet on the pen was elevated above the other magnets. It worked! It’s quite possible that the particular magnets you use make a difference. Based on a quick google search, it looks like some ring magnets have the poles on the top and bottom and others have one pole on each side (like cutting a donut in half). Ours seem to be the top and bottom type. If you can’t get it to work with a difference in height, try putting all the magnets at the same height.

Now let’s talk about what the pen is spinning on. The post recommended using a coin. We tried a nickel, and it didn’t work very well because the face of the current nickel is not very even and the pen slid to one side. So then we tried just using a cardboard circle. This worked pretty well, but the pen didn’t spin as long as we thought it should. I wondered if the amount of friction between the point of the pen and the cardboard vs. a coin was enough to make a difference, so we tried again with a penny (tails side up). This worked very, very well! So I would recommend using a penny, tails side up.

Make it an experiment! Don’t tell the kids ahead of time what will happen, and have them time how long the pen spins on cardboard and then on a coin. 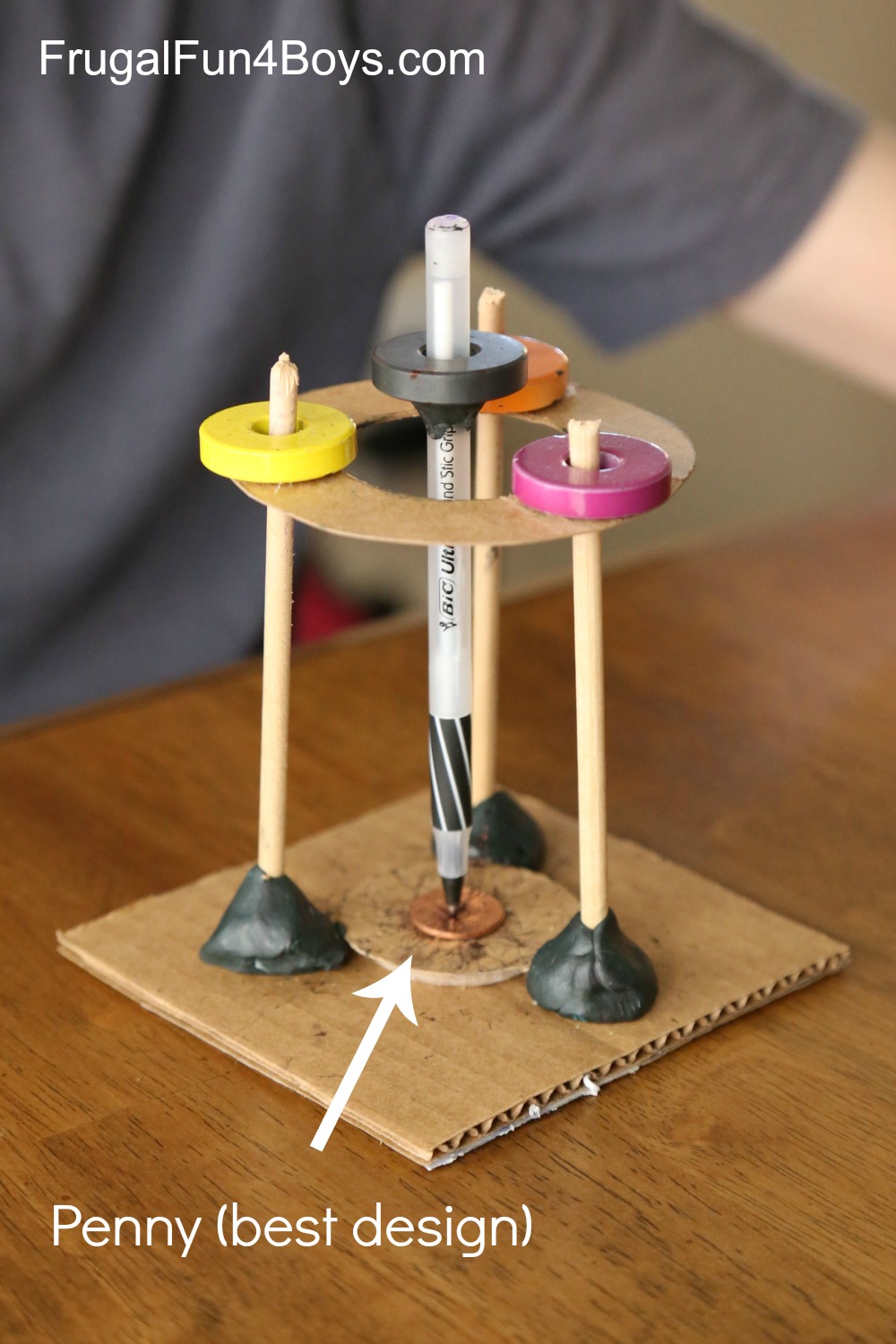 We used bush trimmers to cut off the excess dowel rod. Aidan insisted that the long ends were in the way!

Once our pen was spinning pretty well, we decided to try adding a pinwheel on top as the post suggested. 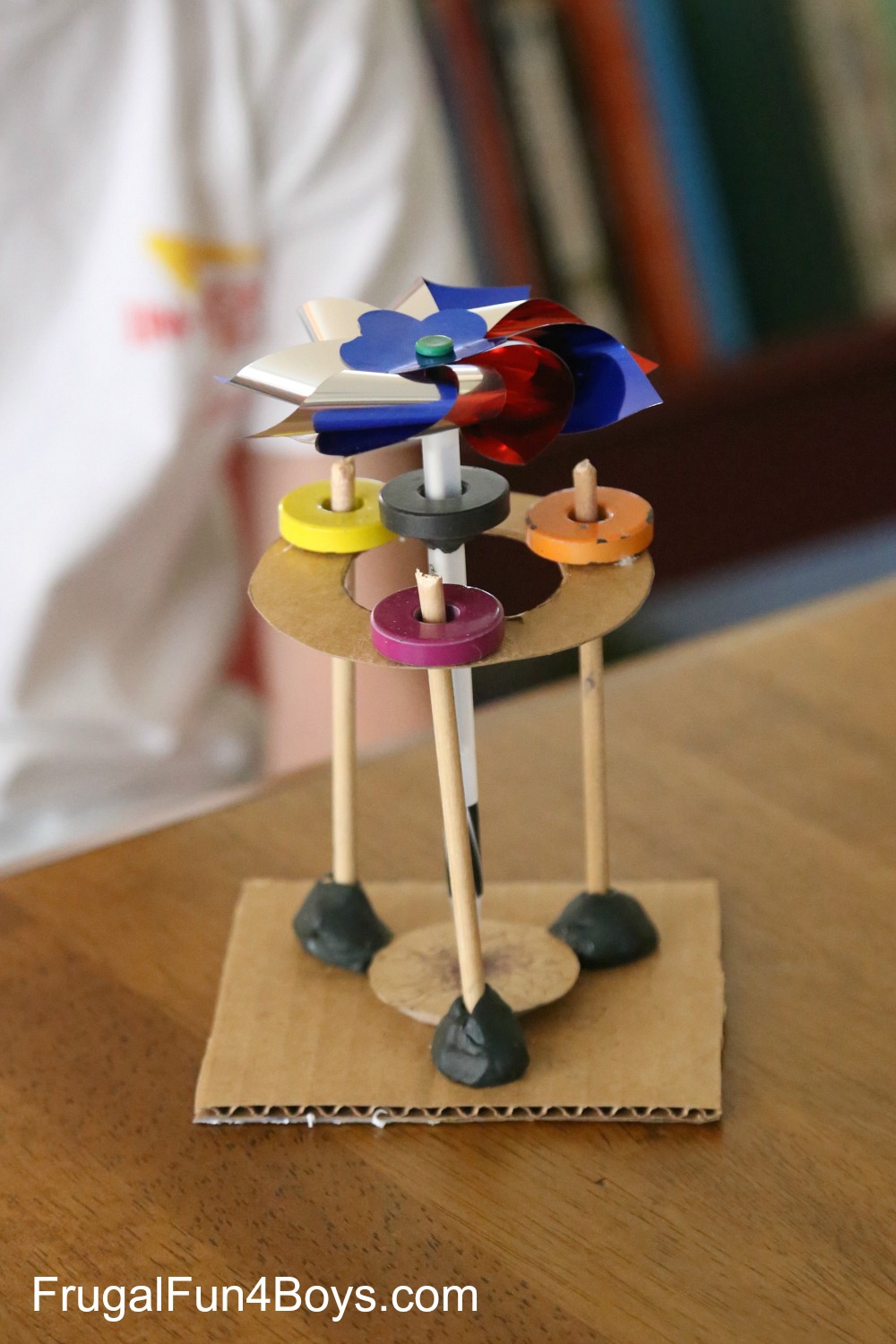 We held a small portable fan over the pinwheel, and it spun like crazy! 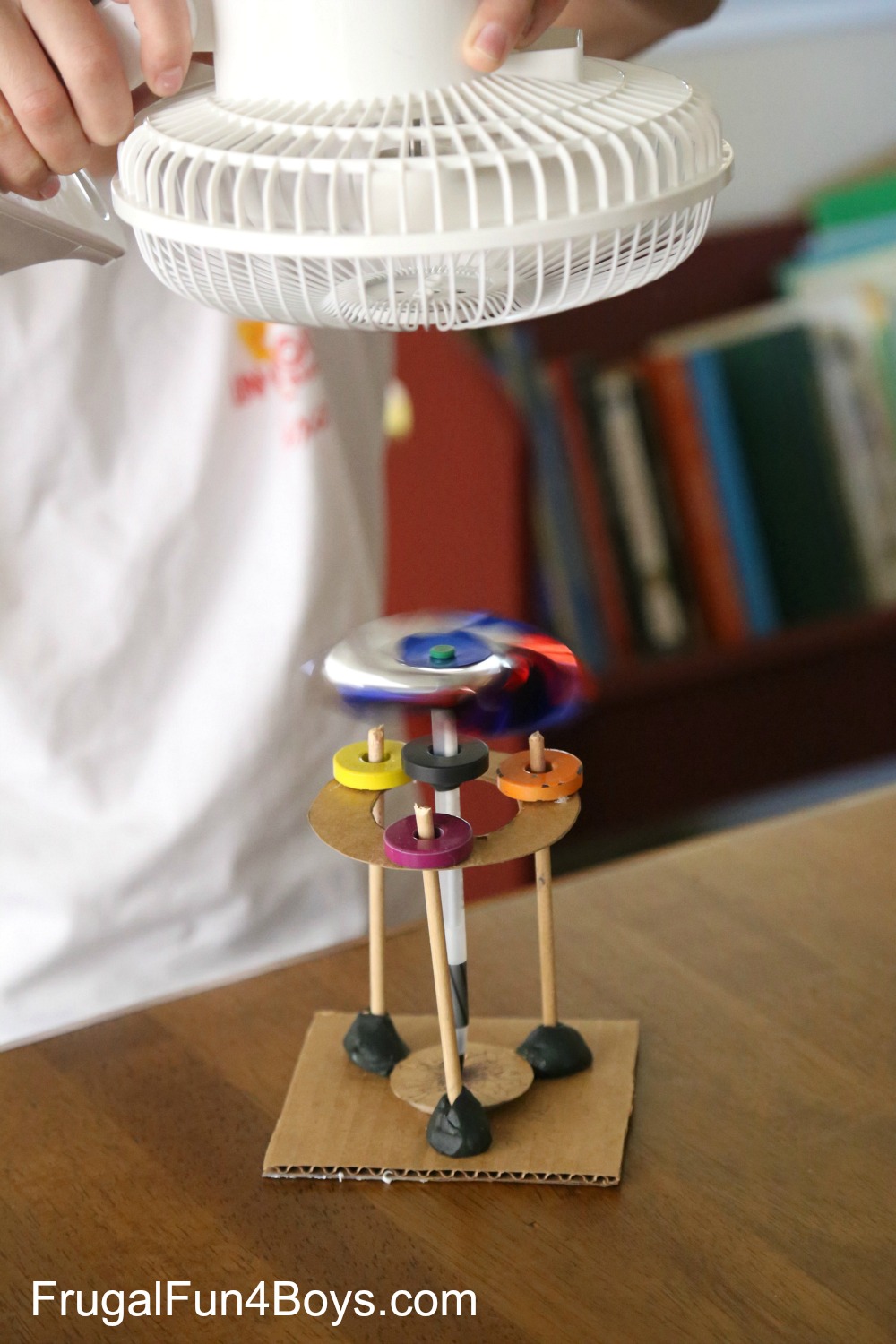 Want to see our spinning pen contraption in action? 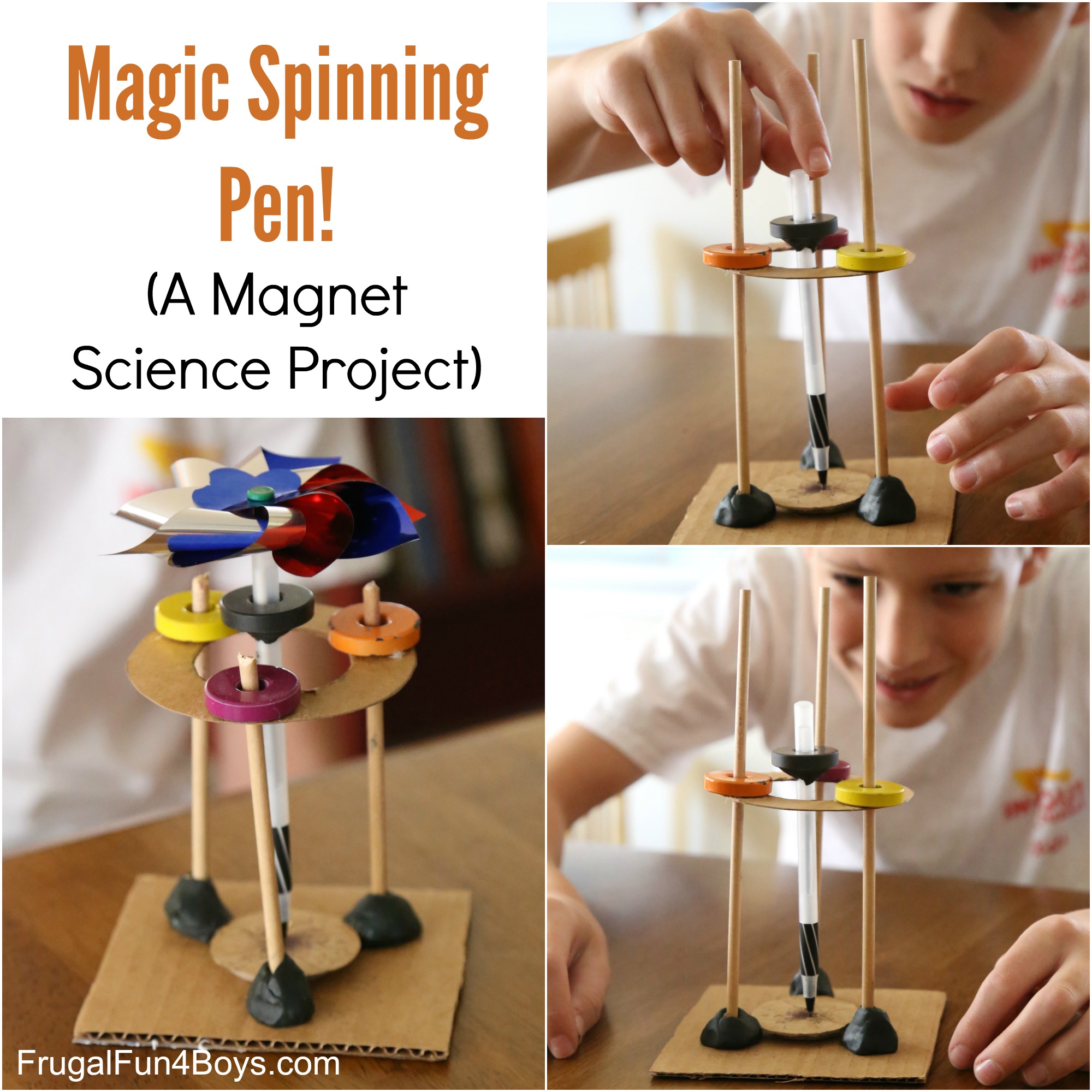