How to make Superhero Sock Monkeys

Gresham and I have been dying to show you the gifts we made for his brothers this year, but I was afraid to post before Christmas just in case someone were to walk past my computer screen at the wrong moment and spoil the surprise!

We have a tradition of the boys giving gifts to each other on Christmas Eve. It started with just the first two boys, and now that we have five kids, we have asked if they would rather draw names and give and receive one larger gift. They didn’t like that idea – they enjoy picking out something for each person! So starting in November, the boys are not allowed to buy things for themselves, and they save their chore money for buying Christmas gifts. Janie (baby girl) was too young to give gifts this year, and Jonathan (age 2) bought Hot Wheels cars that I gave him the money for. He had so much fun picking them out and helping with the wrapping! Aidan and Owen picked out gifts at Target and Toys R Us. Gresham had the idea to make sock monkeys for each of his brothers. We bought the socks several months ago and never did anything with them, so the only thing we needed to buy was stuffing. Then we had the idea of making the monkeys into superheroes! I did a quick search on Pinterest and found several sock monkeys made in superhero colors, but we decided that we wanted the masks and capes to be able to be taken on and off.

We were thrilled with the finished product, and Gresham could not wait to give these gifts on Christmas Eve. 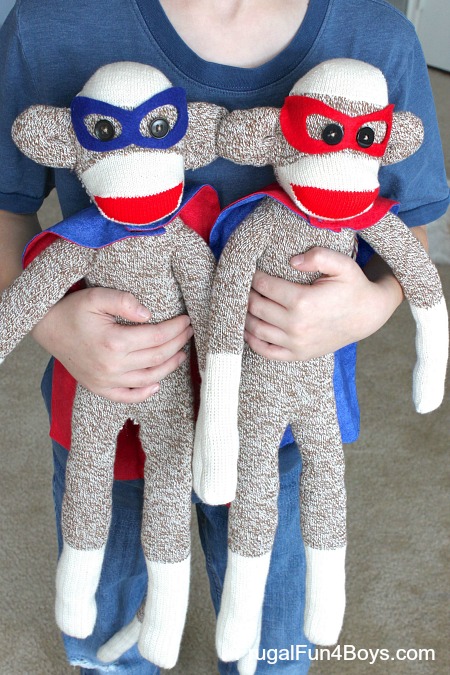 Here’s a close up of their little monkey faces: 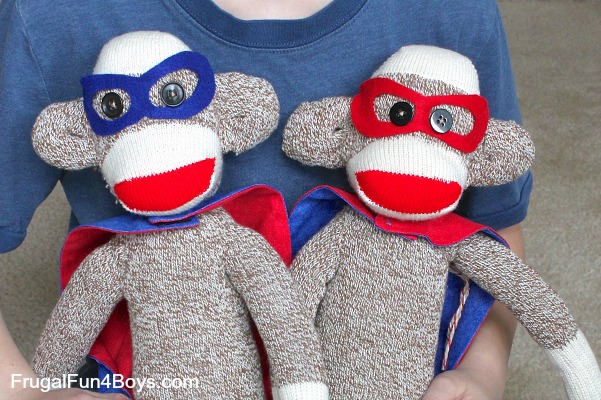 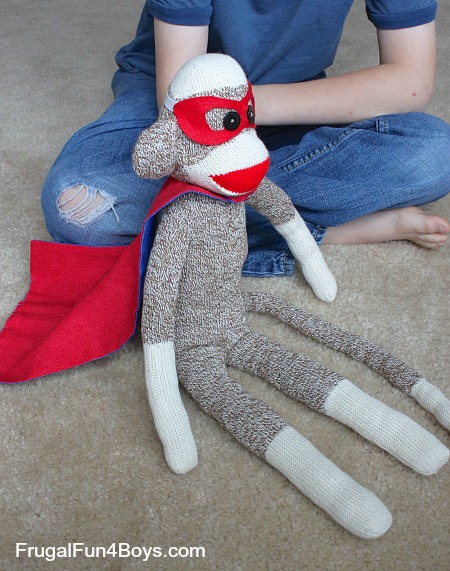 They are cute even without their superhero gear. 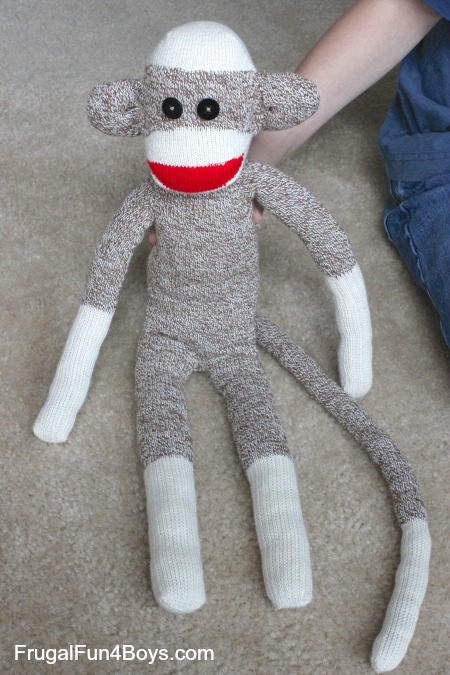 Since Aidan is a little old for superheroes, we ordered a hooded sweatshirt on Etsy for his monkey. Red is his favorite color, and he loves hoodies. (I searched “American Girl” to find this hoodie on Etsy… but don’t tell! Aidan did not want anyone to know that it was really for an American Girl doll – ha!)

Here is the hoodie we bought, and we were very happy with this seller: Red Doll Hoodie 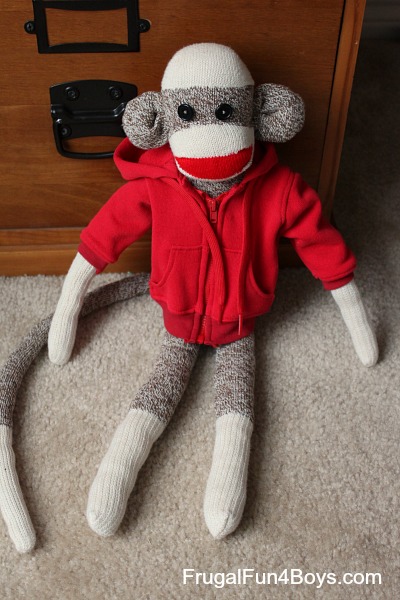 I was not able to take step-by-step photos on this project, but here are some tips that might be helpful if you want to make one.

We bought the socks at Hobby Lobby in the doll crafts aisle (the one with doll heads and bears and little accessories, etc.), NOT the sewing section. They look like this: 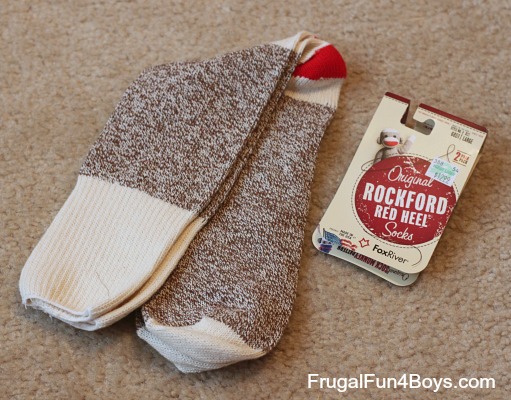 The package holds 4 socks, which is enough to make two monkeys. It was $12.99, but we used a coupon! Or order Rockford Red Heel socks on Amazon. There are several colors to choose from on Amazon, but Hobby Lobby only had brown. We used size large, and you can see from the first photo of my 8 year old holding the monkeys that these make large monkeys!

The inside of the package has instructions for making the monkey. 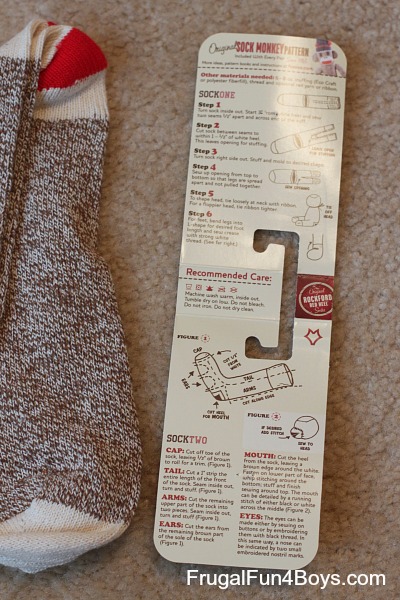 One sock makes the head, body, and legs. The other sock makes the arms, ears, tail, and mouth. My mom did machine sewing for the legs and arms. I sewed on all the mouths and ears by hand. Gresham did most of the stuffing and sewed on the arms and tails by hand.

We folded each seam under before stitching to prevent fraying.

I stuffed the ears and then stitched them shut before attaching them to the head. I also sewed a fold into the ear. 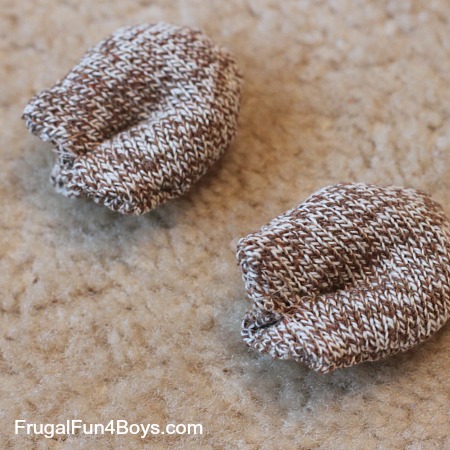 The back of the ear had a fold, but it straightened out once it was sewn to the head. 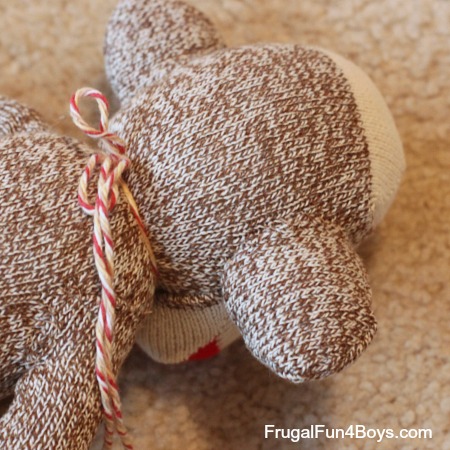 The masks and capes are extremely simple. The mask is a single layer of felt with elastic hand sewn to each side. I had to cut each mask a little differently because we did not space the eyes the same.

Having the eyes close together makes for a cuter monkey, but it’s harder to get the mask to look right.

I drew a pattern on paper for the capes and then my mom made them. They are red on one side and blue on the other. She left the bottom open so that she could turn them right side out after sewing them, and Gresham sewed the bottoms closed by hand. 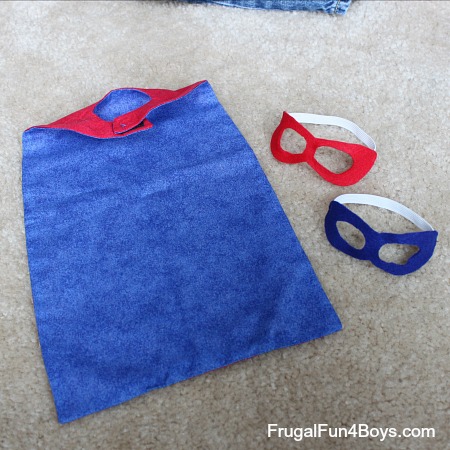 Here is another view of the capes: 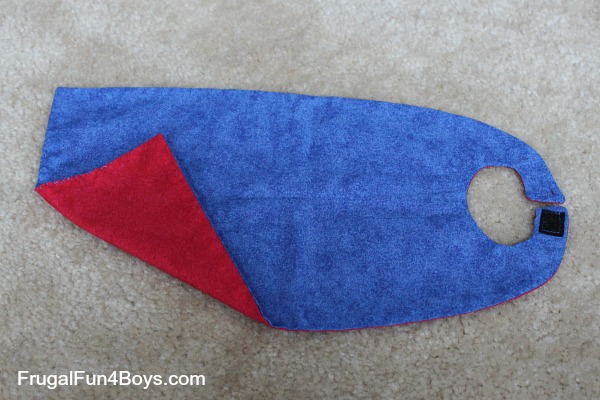 We sewed the tails on the red part of the bottom, but then we put the last tail on above the red and that one actually looks the best. 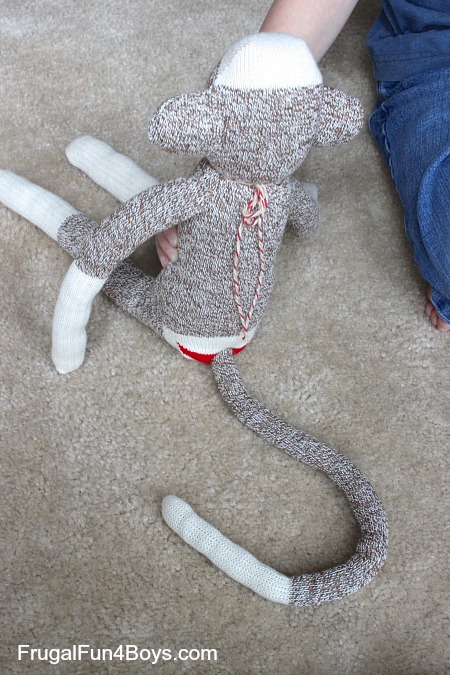