One of the very first things I pinned on Pinterest was a tin foil river. I have often wondered if this activity would actually be worth it. Does this actually work? Would the tin foil hold up? Would the boys like it? So we decided to give it a try! Aidan was gone at basketball camp, and it was a good time to do something geared more for the younger boys.

We used an entire roll of heavy duty foil. I doubled it over before folding up the sides, but there’s not really one correct way to do this. Foil is pretty forgiving. We did have to push down the center into the grass so that the water would flow better. We have a slope in our yard, so we set up our river to flow downhill. Then we put the hose at the top.

If it’s a windy day, you might need more than one person to make the river so that you can hold down both ends of the foil. Once we had some rocks in our river, we had no problems with it blowing away. 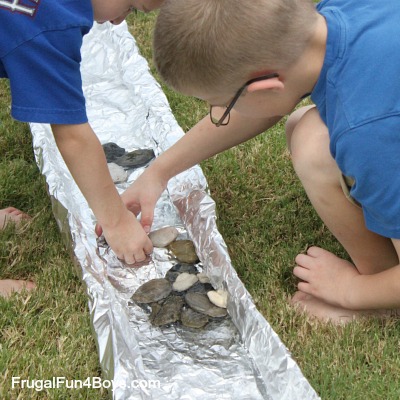 The river is the most fun if you keep the hose running the whole time. That can be fairly wasteful, so we also collected water at the bottom in a bucket and then re-used that water by scooping it up and pouring it out at the top of the river again. 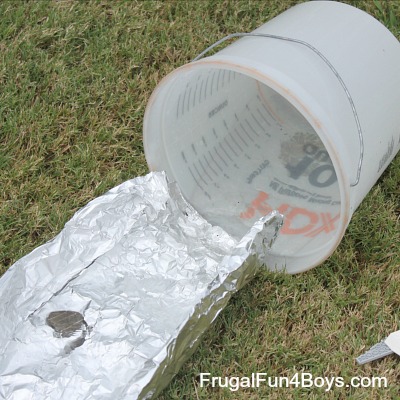 We were able to get two afternoons of play out of our foil river. Jonathan (age 2) enjoyed scooping and pouring water and trying to get his hands on the hose when no one was looking! Owen enjoyed making dams in the water with rocks and floating Lego boats down the stream. 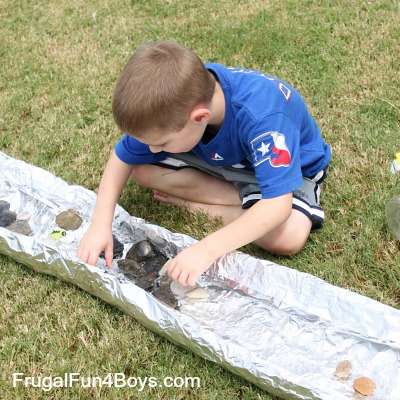 I’d say it was a fun activity!