Use cardboard, craft sticks, and hot glue to create an epic marble run! The marbles land in paper cups at the bottom of the track. This is a fantastic engineering challenge for kids. How should we position the sticks? Which path will the marbles take? How many will land in each cup?

As always, make sure that the kids playing with the marble run are not putting the marbles in their mouths!

Aidan and I built this marble track, and then the younger kids have been enjoying playing with it. Owen was going to help us, but he got distracted building castles out of the extra paper cups – very typical!

We started with cardboard sheets that my husband had cut from our IKEA sofa box. Then all we needed were craft sticks, scissors, hot glue, paper cups, and duct tape. 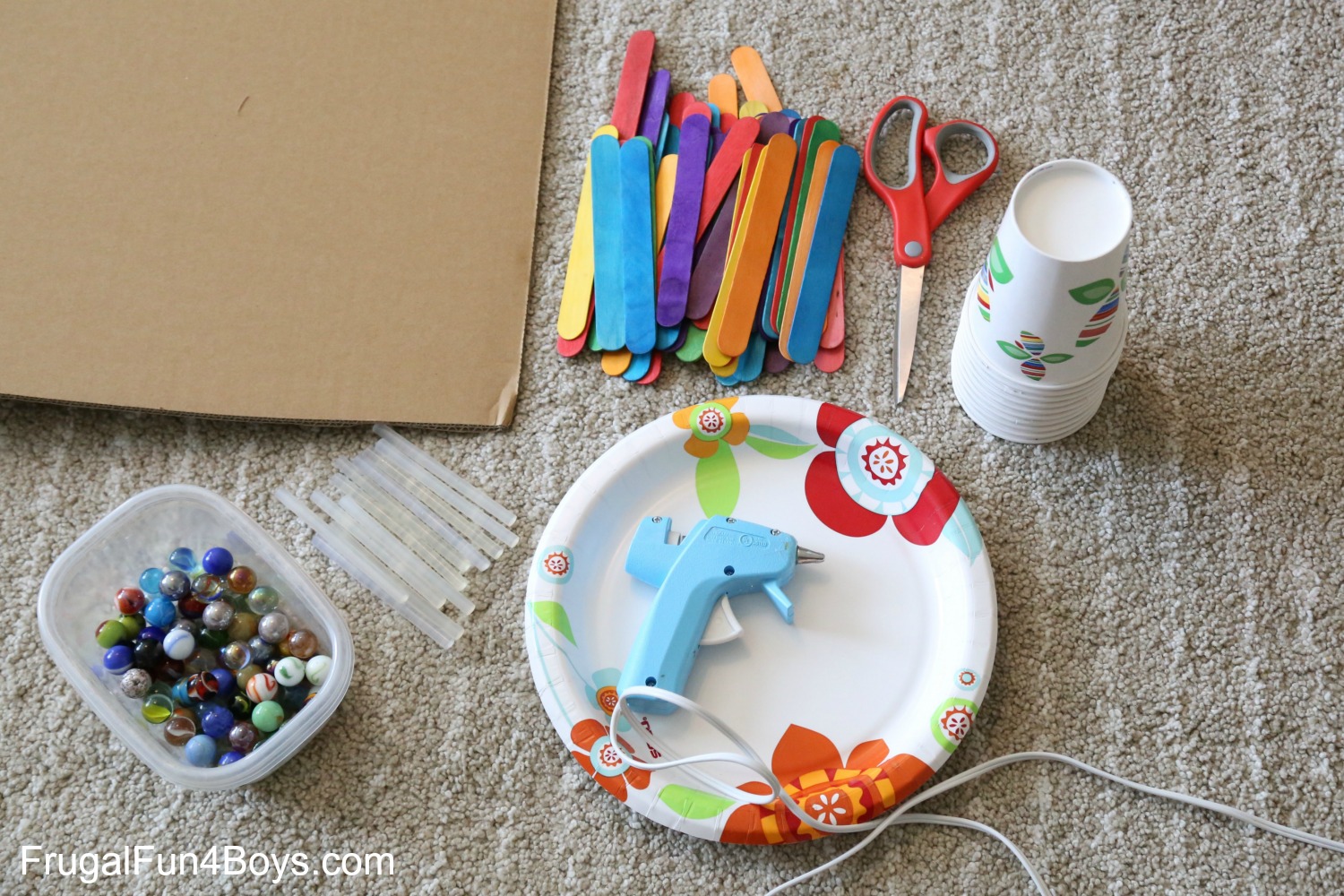 We taped strips of cardboard to the sides to keep the marbles from rolling off. I cut the rims off the cups before gluing them to the cardboard so that the marbles would roll smoothly into the cups. 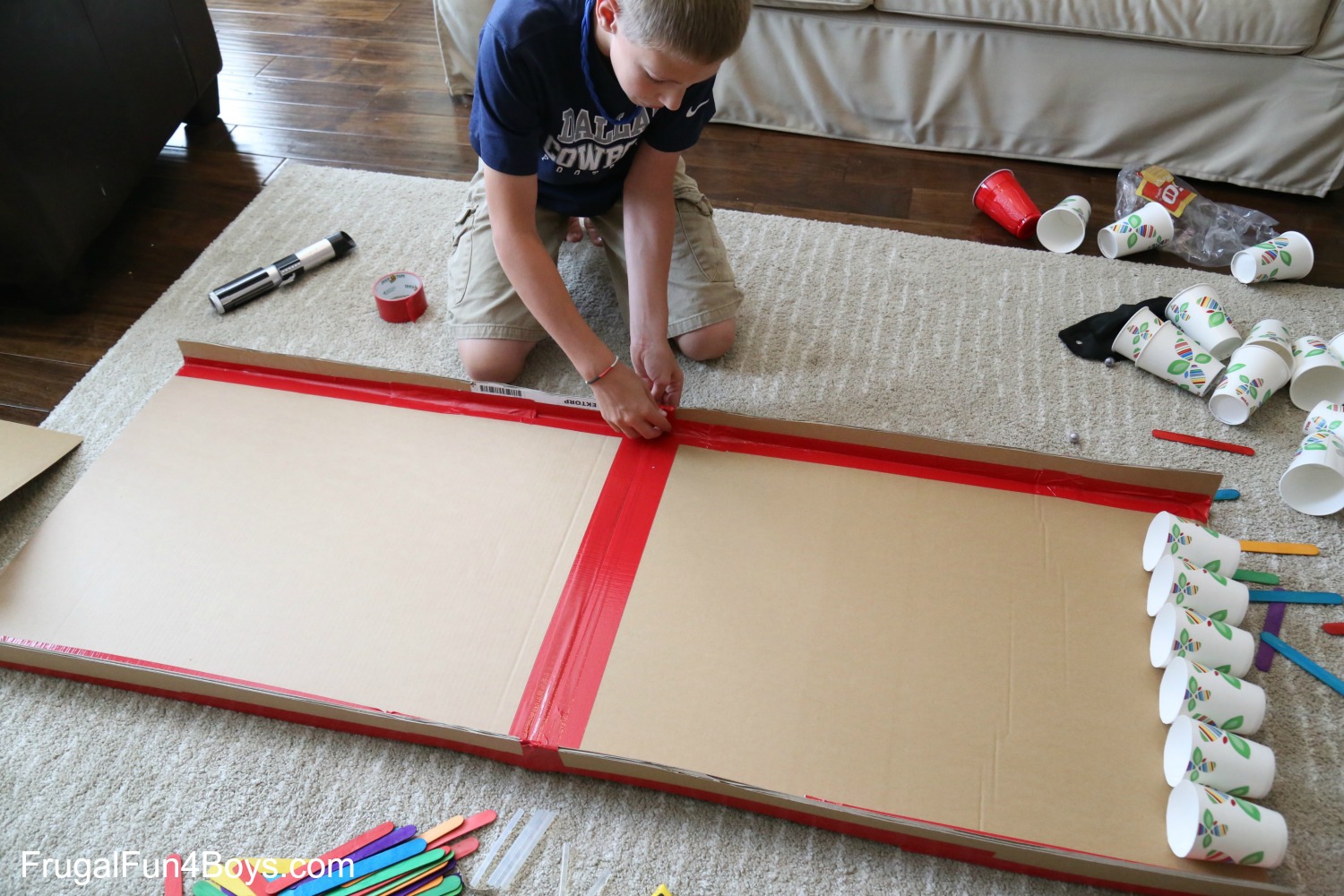 Then we glued craft sticks to the cardboard with hot glue. We did two sections with little short sticks to make it sort of like the Plink-O game. It worked great! We weren’t sure how much of an incline we were going to want for our marble run, but leaning it against the couch worked perfectly. 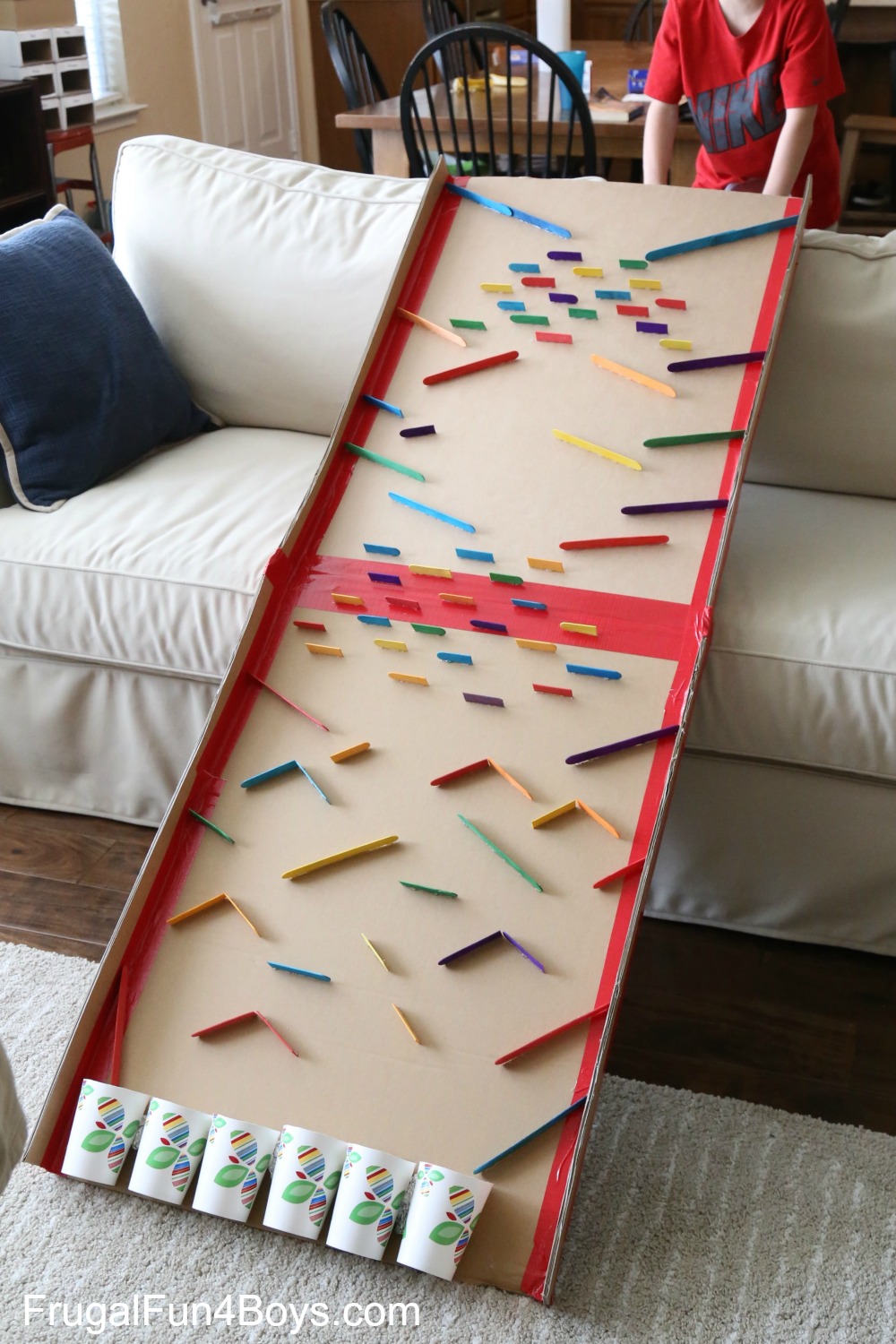 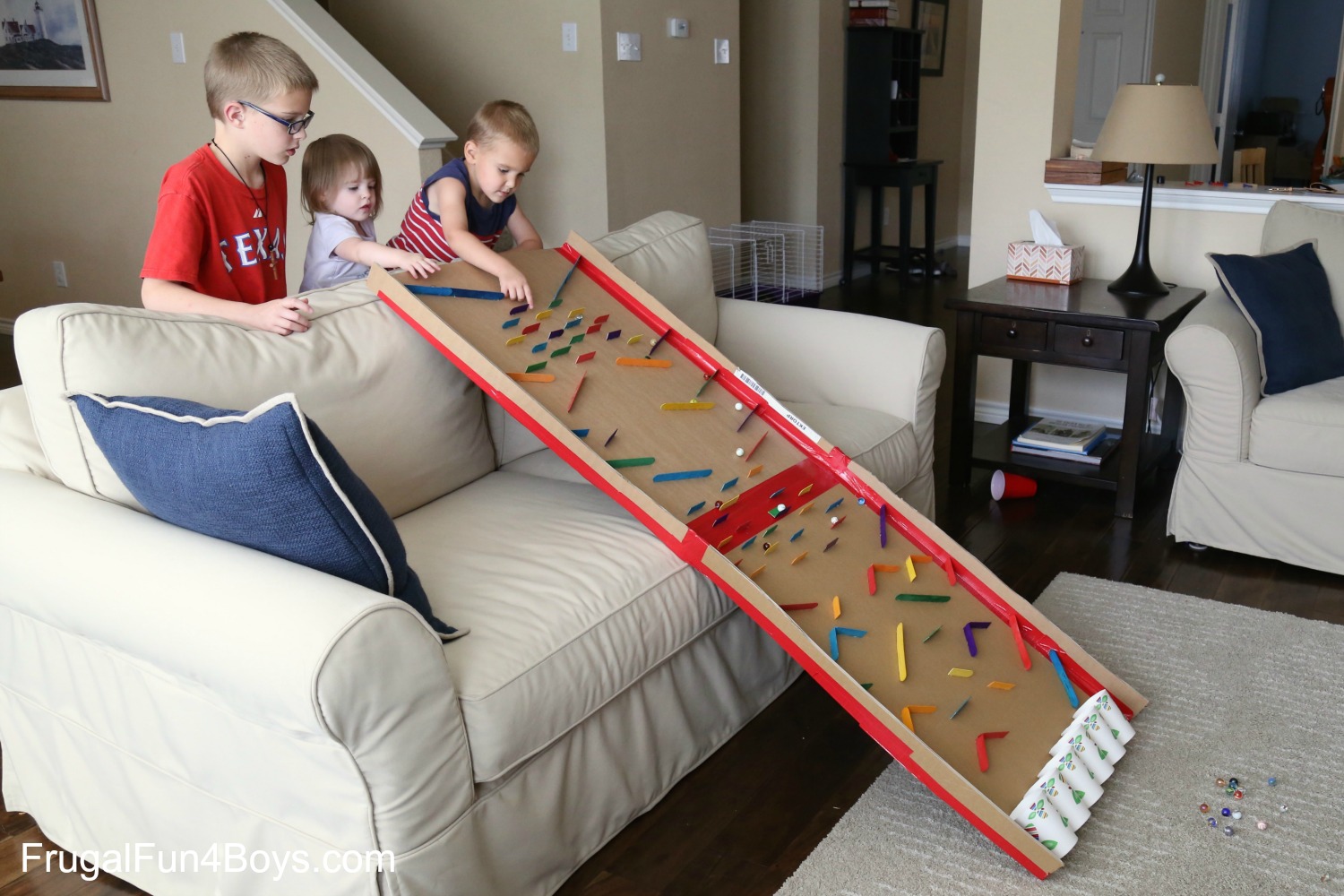 And of course someone had to pour the whole bucket of marbles down at one time to see what would happen! 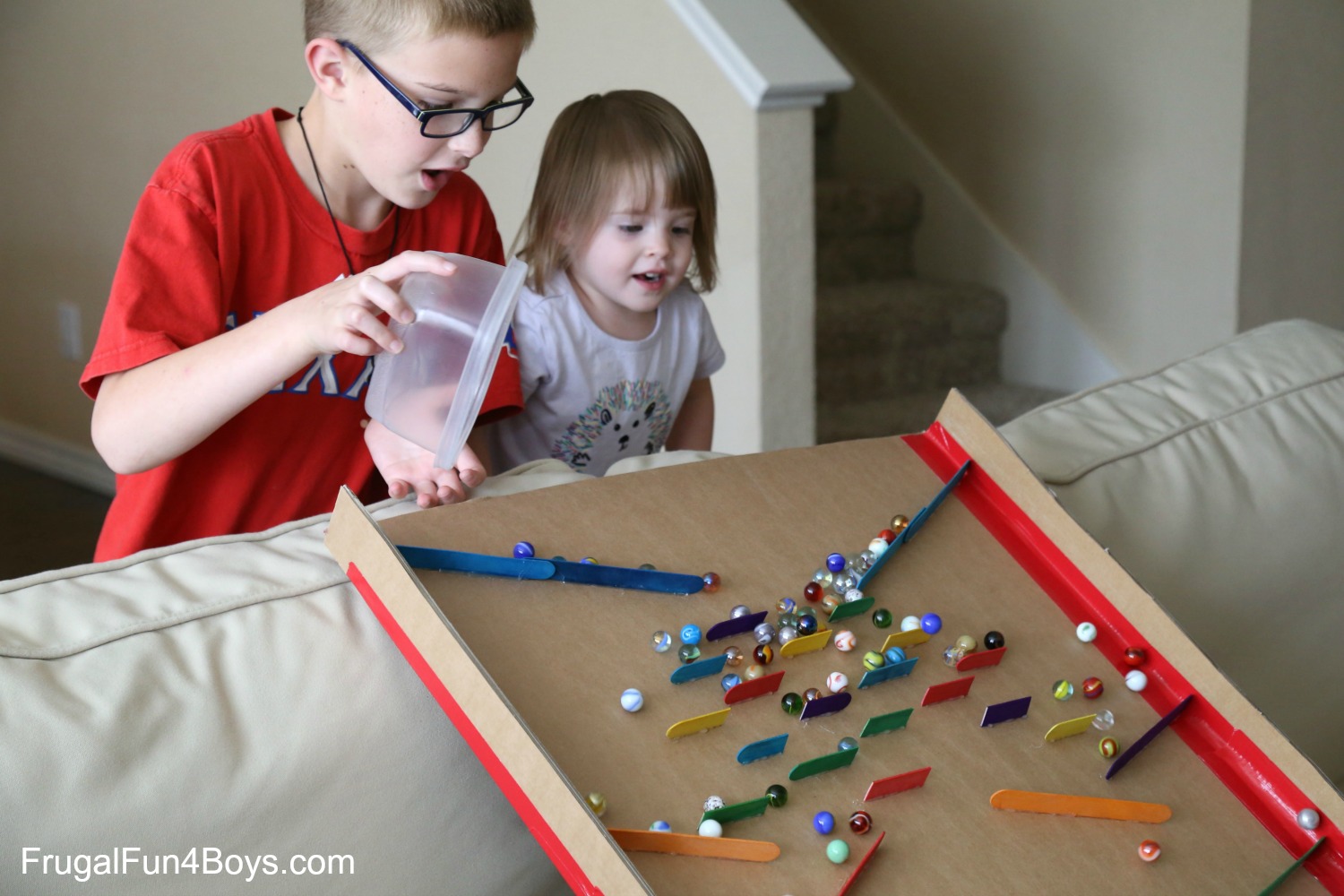 Even though we felt like our sticks were evenly spaced, the cups at the bottom told a different story! You can see that the red sticks at the bottom diverted marbles away from the fourth cup.

Some marbles did roll between the cups. We had little balls of tin foil blocking the holes, but Janie was very bothered by them and pulled them all out. Just know that that is an option! Cotton balls would probably work well too. 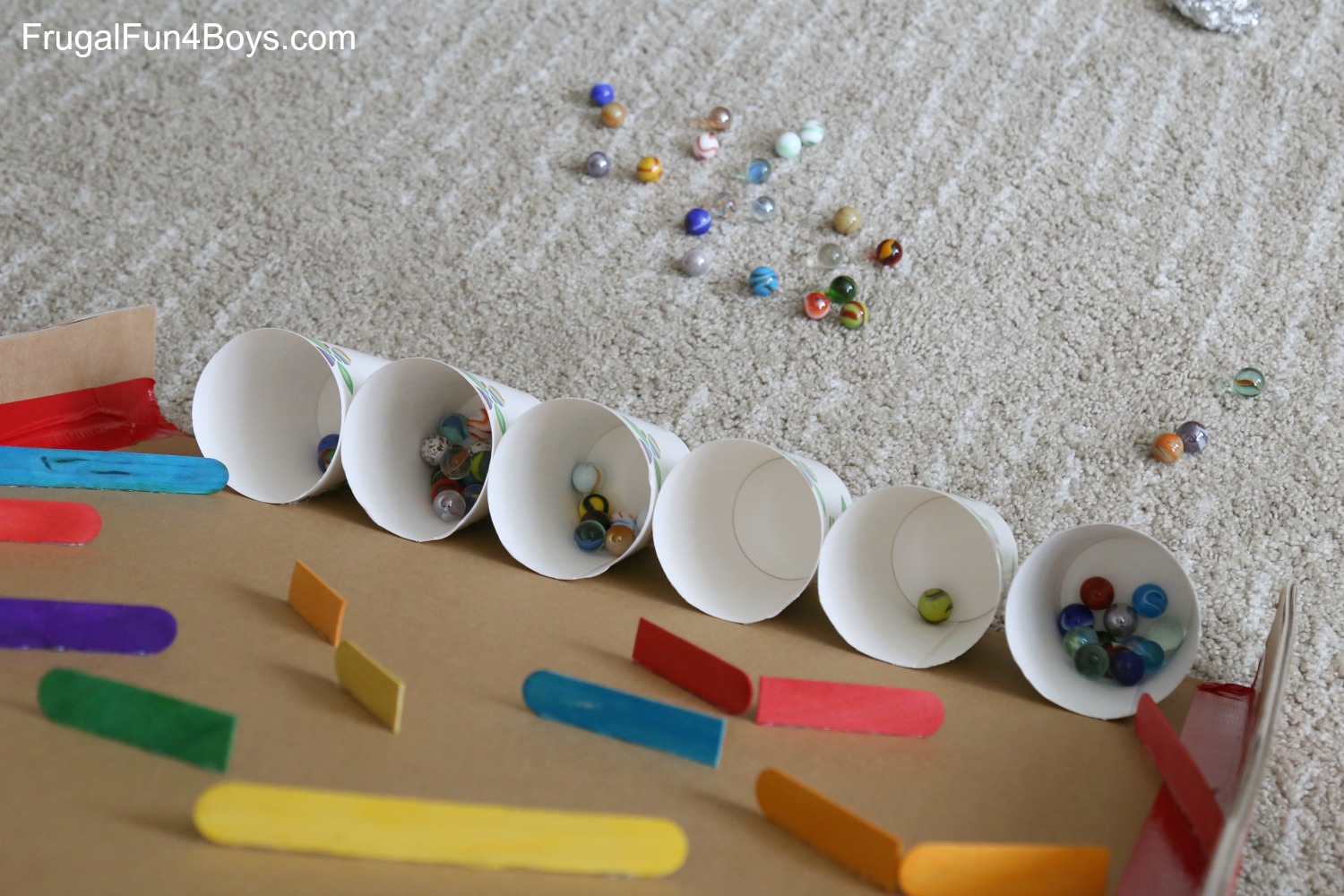 I would love to try this project in a classroom setting with different teams of kids building their own track! Hmm, maybe I should think about that at our church’s homeschool co-op…

We love marble runs! Here are some of our other favorite marble runs to build: The BEST Marble Run Projects for Kids