This would be a fun building challenge for a LEGO® club or a STEM club!

One day, Aidan came up with the idea of building a LEGO® paper airplane launcher using the pull-back motor that came with a Technic race car set. He spent time over several days perfecting his design. The final launcher only launches the paper airplane about 4 feet, but I’m sharing this idea with you anyway because it’s a really neat engineering challenge!

If you don’t have the pull-back engine needed to build this project, you can get one inexpensively on Brick Link.

Besides some basic bricks and some Technic bricks (with holes), you will need: 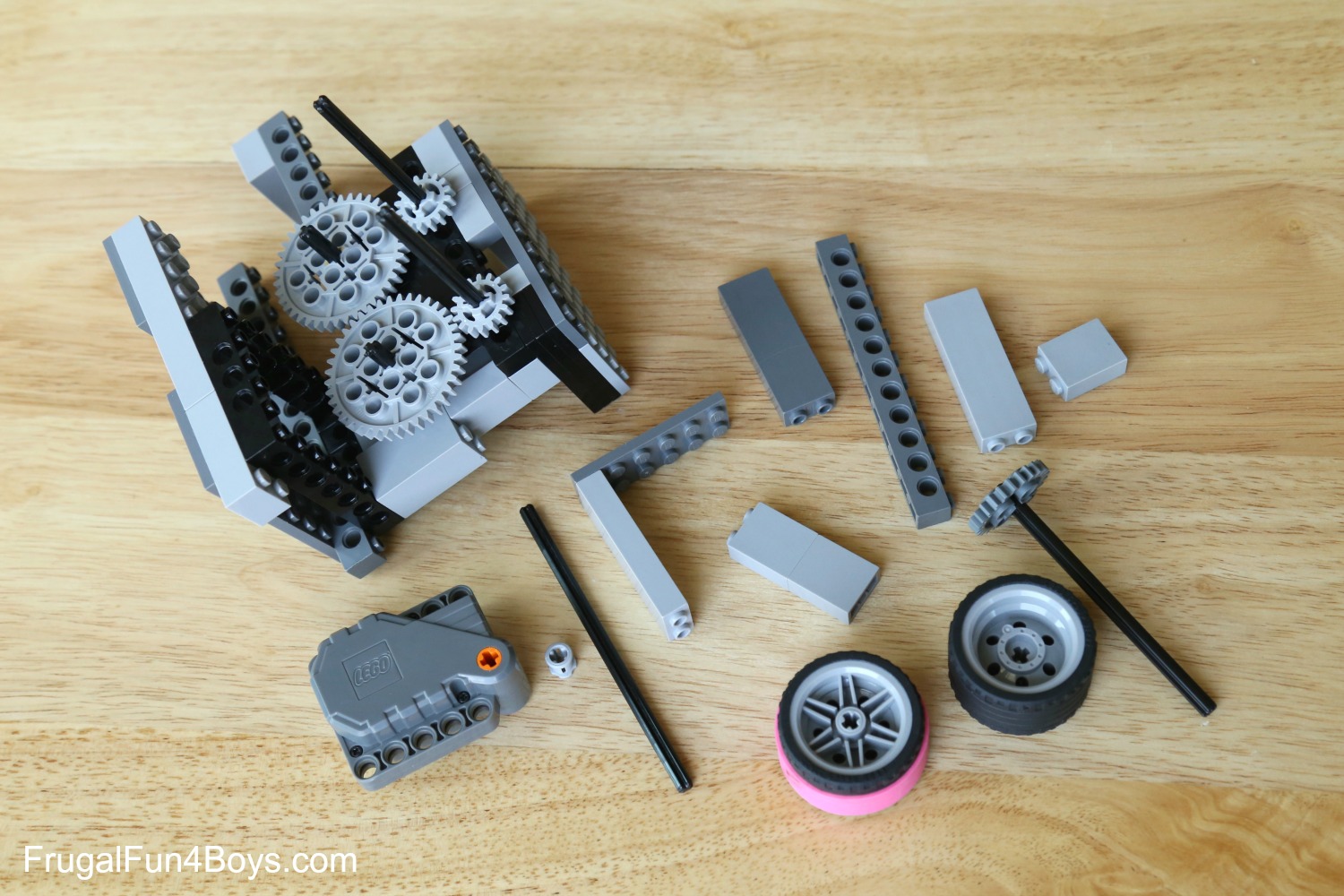 Attach the motor to the rod sticking out of the large gear. The second rod in the motor is just for stability. 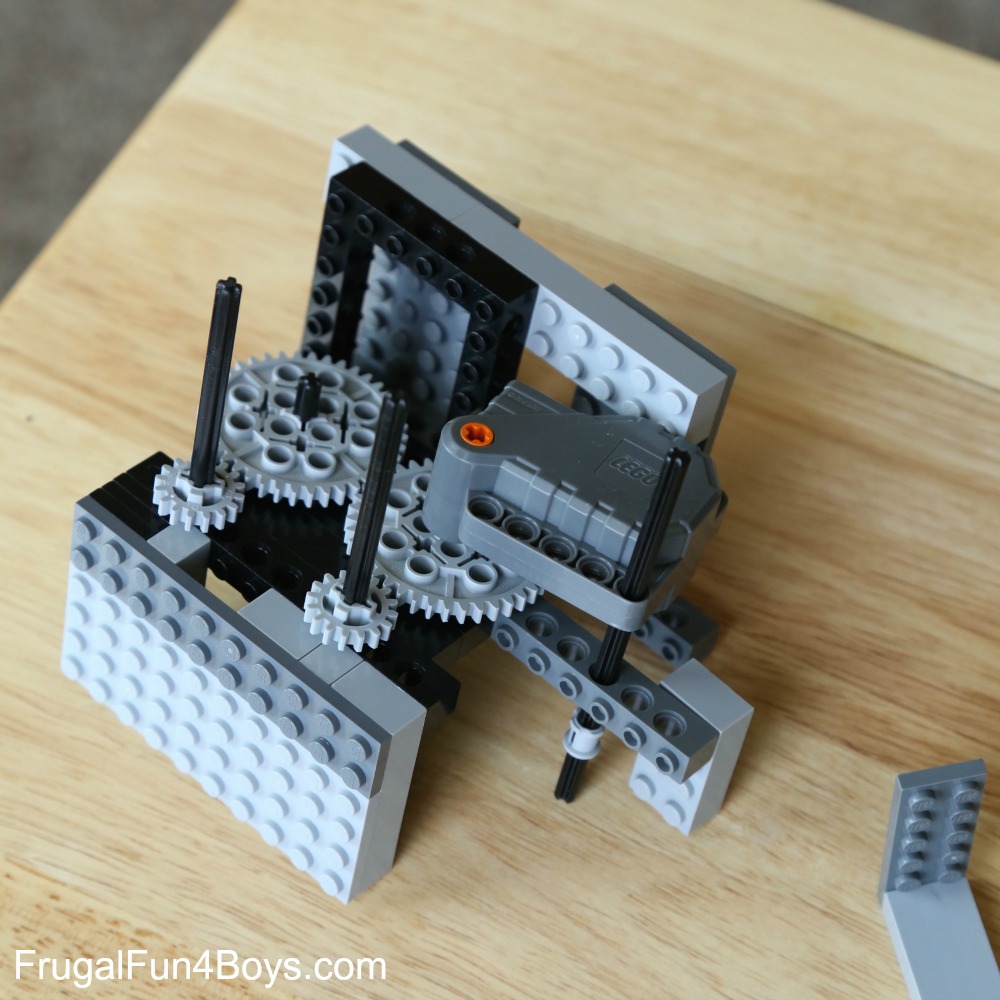 Add another layer of bricks and then attach the wheels to the Technic axles. The axles are x shaped and fit into the x shaped opening in the wheel. The wheels should turn when the axles turn. 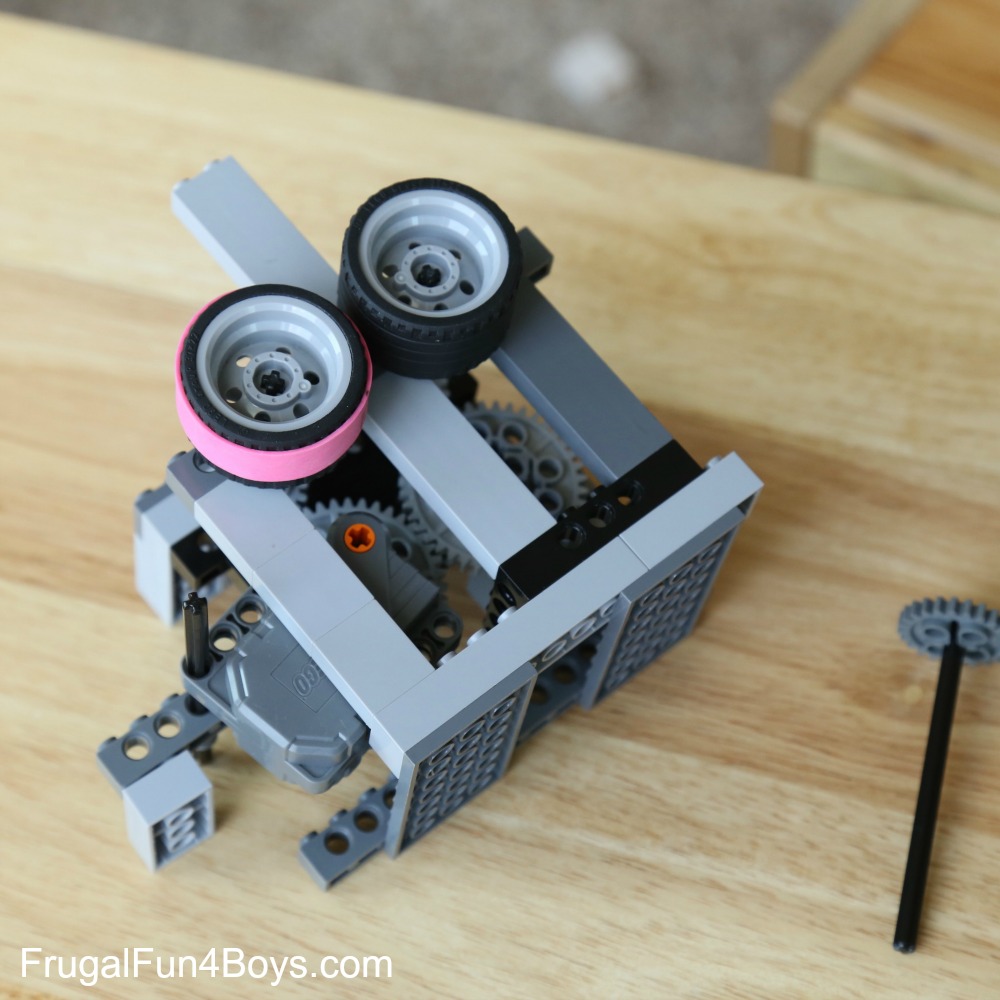 Aidan built a tool to wind the launcher out of another Technic axle and a gear. To wind it, stick the Technic axle into the orange hole in the motor and turn. You’ll need to hold down the other large gear to keep it from unwinding as you wind it! 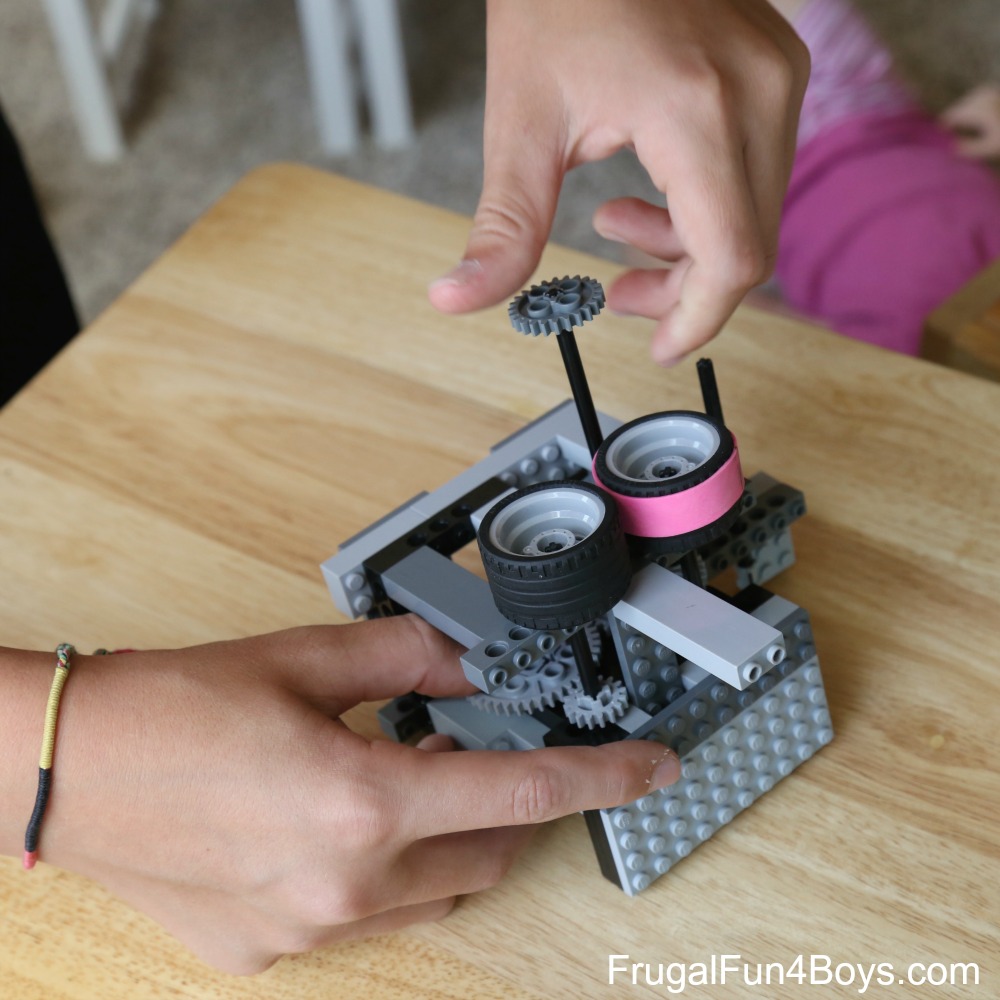 The paper airplane launcher works by using energy from the wheels to push the plane forward. You’ll also need just the right amount of friction between the wheels and the plane. To get the launcher to work, you’ll need to experiment with: 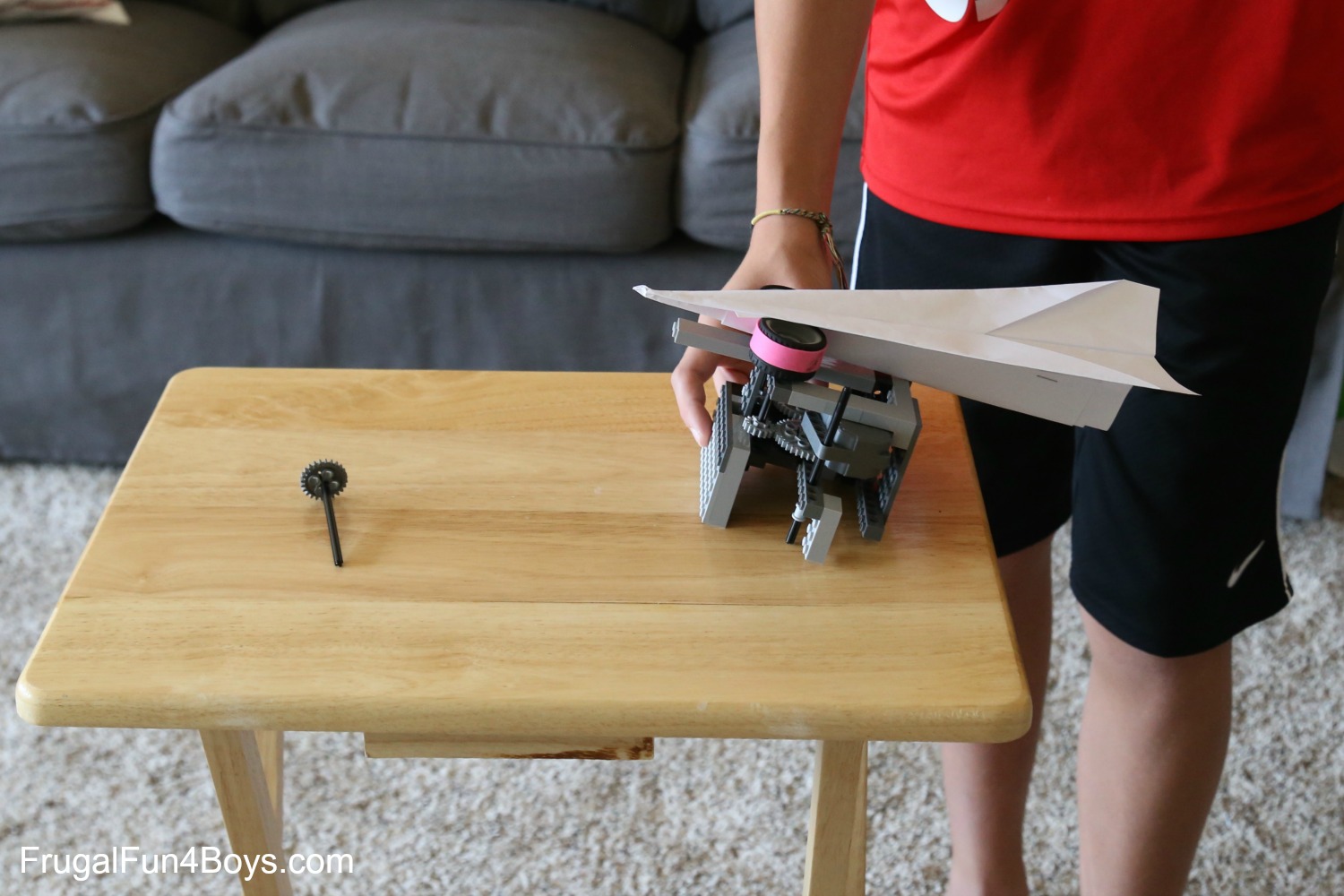 Aidan’s best version of the launcher only launched the plane 3-4 feet. But I thought it was pretty amazing that he could design something out of LEGO® bricks that would even launch a plane at all! This is a great engineering challenge for kids.

After winding the launcher, hold down the second large gear while you insert the plane. Then let go! 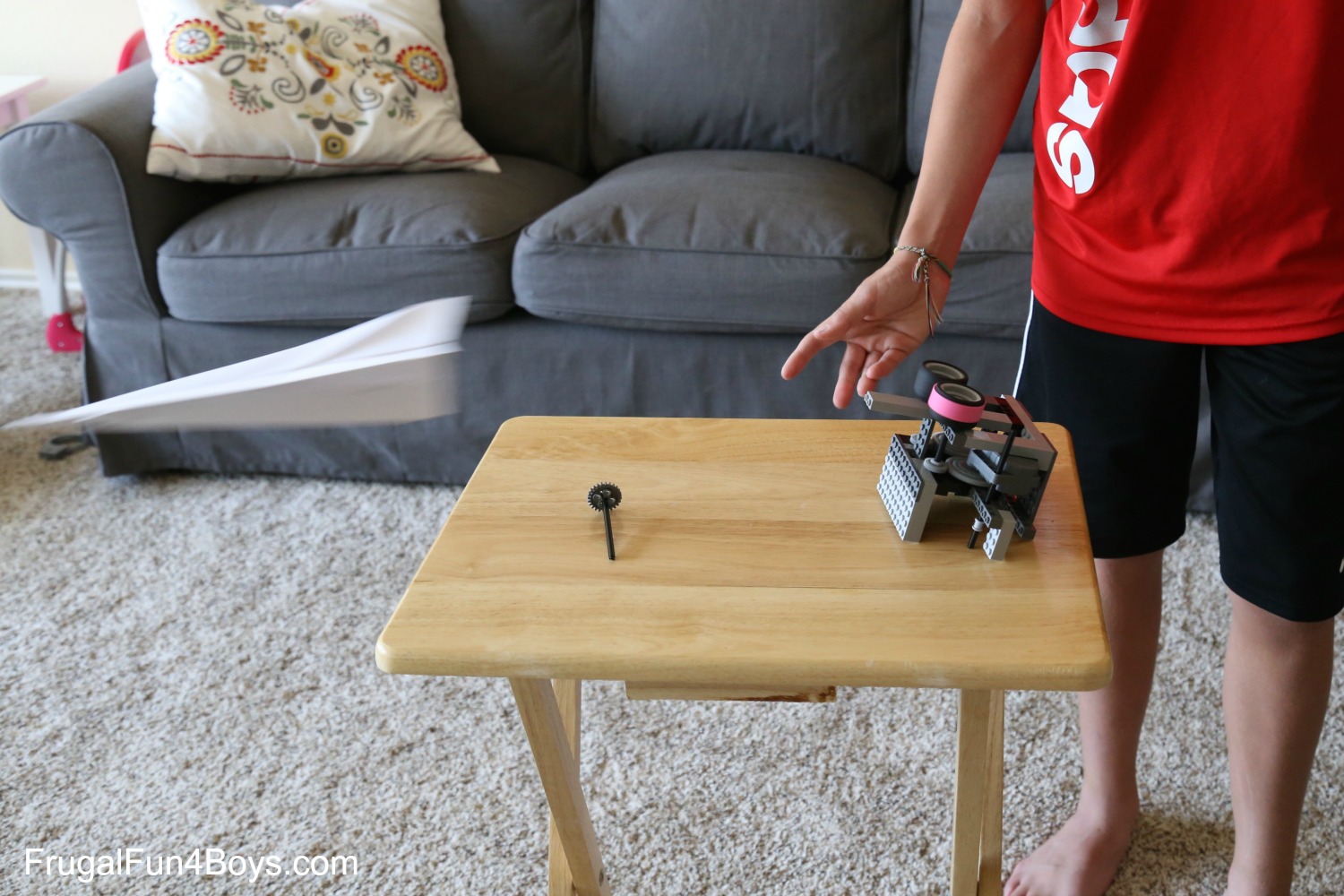 Here’s a simpler way to create a LEGO® paper airplane launcher, and it launches the plane much farther as well. (But there are fewer engineering considerations involved!)

This is the basic design. We used a large rubber band wrapped around this LEGO® frame. The frame is not attached to the baseplate because Aidan wanted it to have a tilt, but I would probably make it flat and attach it to the baseplate for stability. 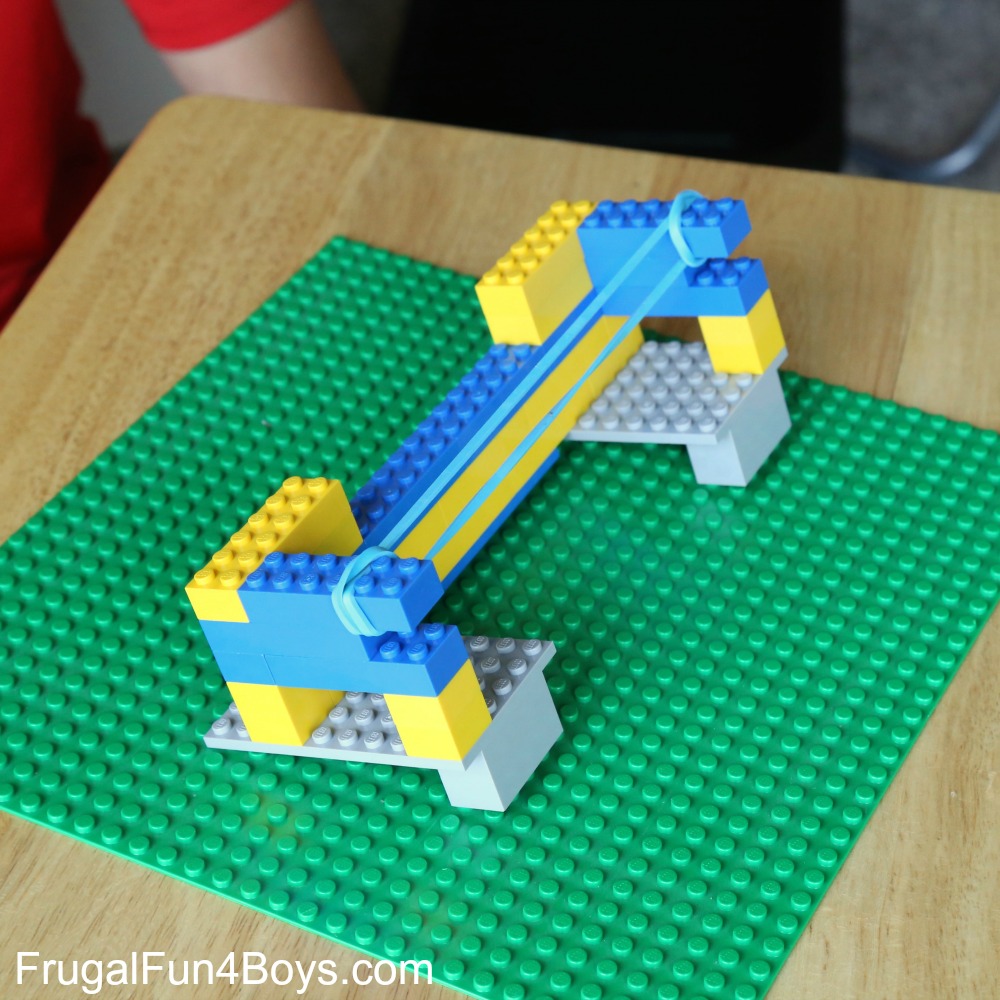 Bend a paper clip to create a hook shape and tape this to the paper airplane. 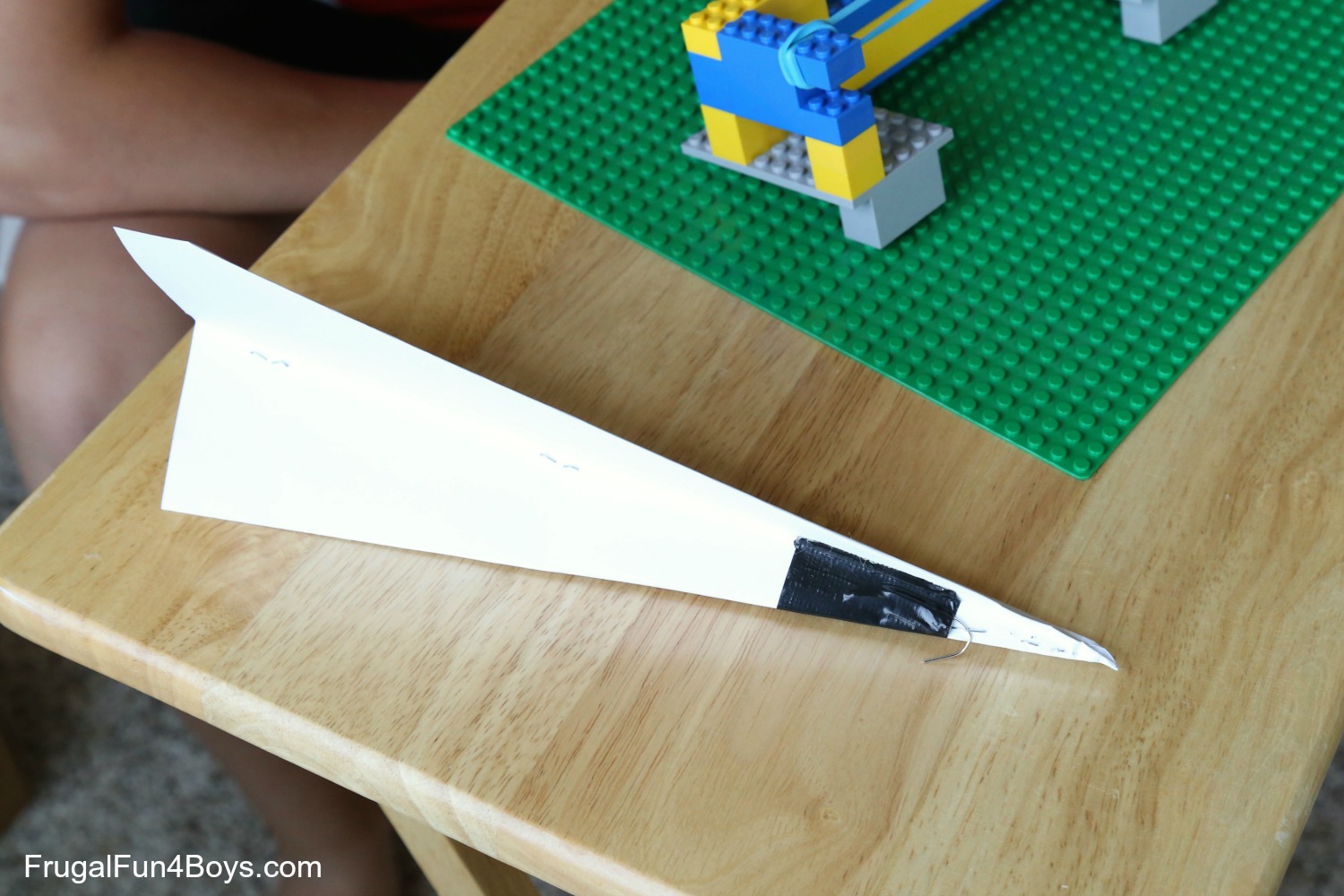 Put the hook around the rubber band and pull back on the paper airplane. 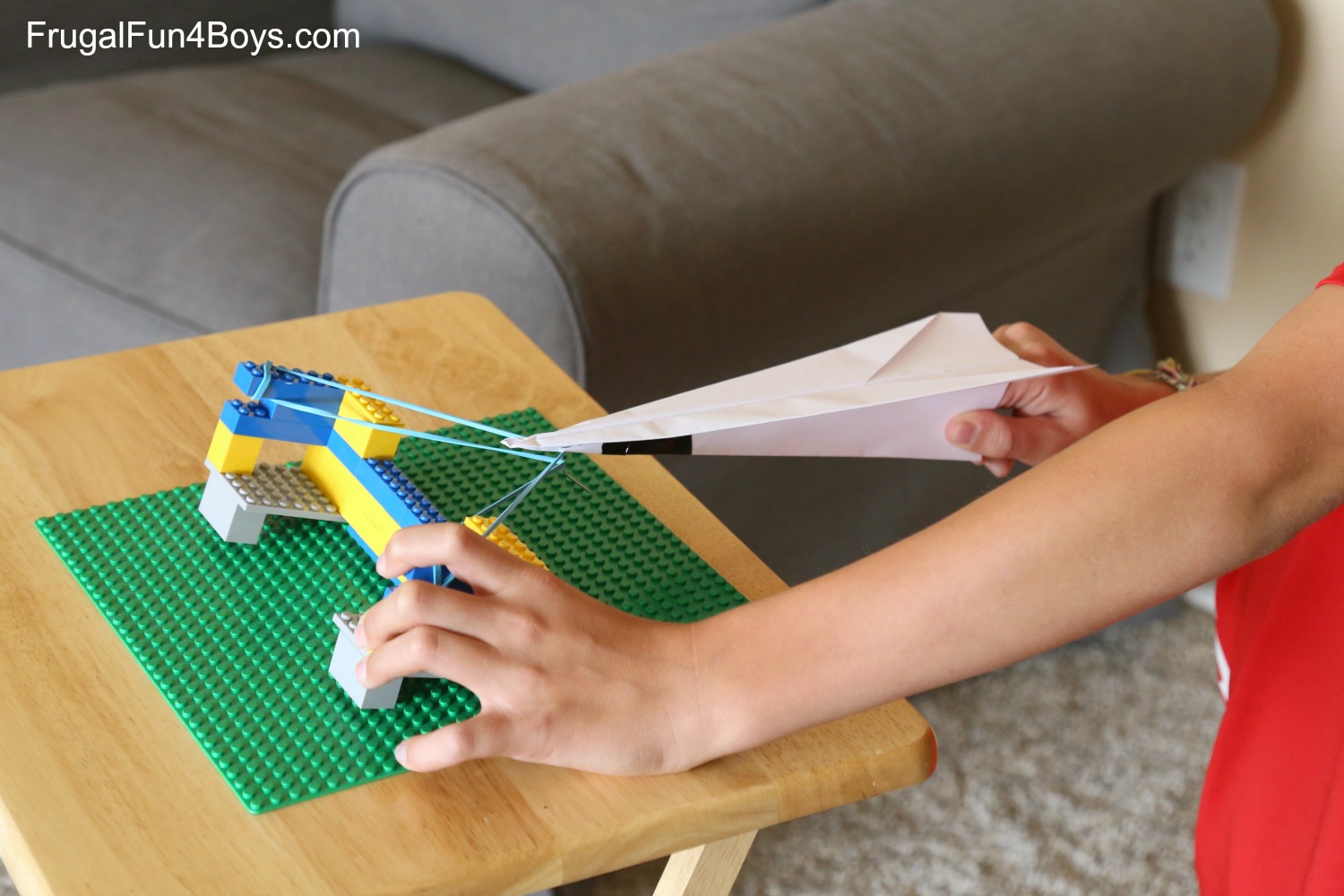 Then let go, and the paper airplane will fly across the room! 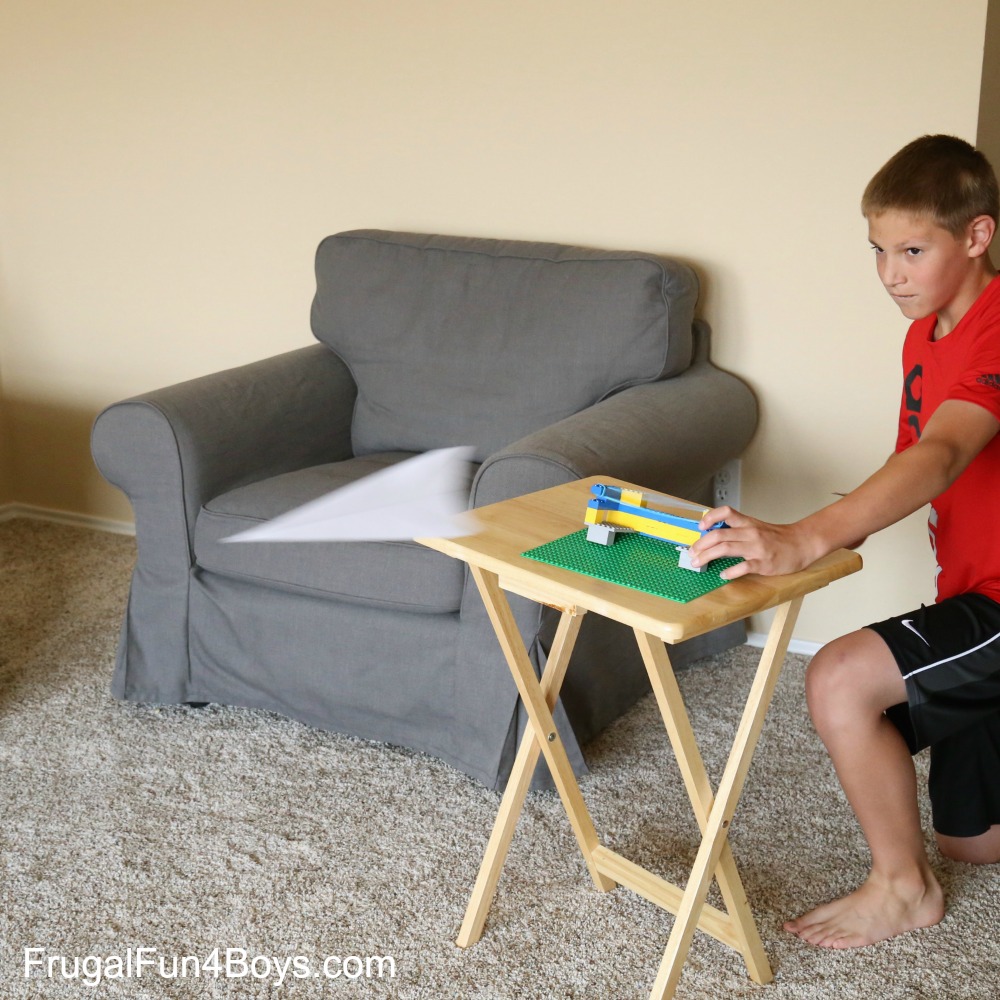 We have another post that shows how to build this type of paper airplane launcher with a board and two nails.

This project would be perfect for a LEGO® club or STEM club! Need more STEM ideas? You can check out more ideas here: STEM Activities. 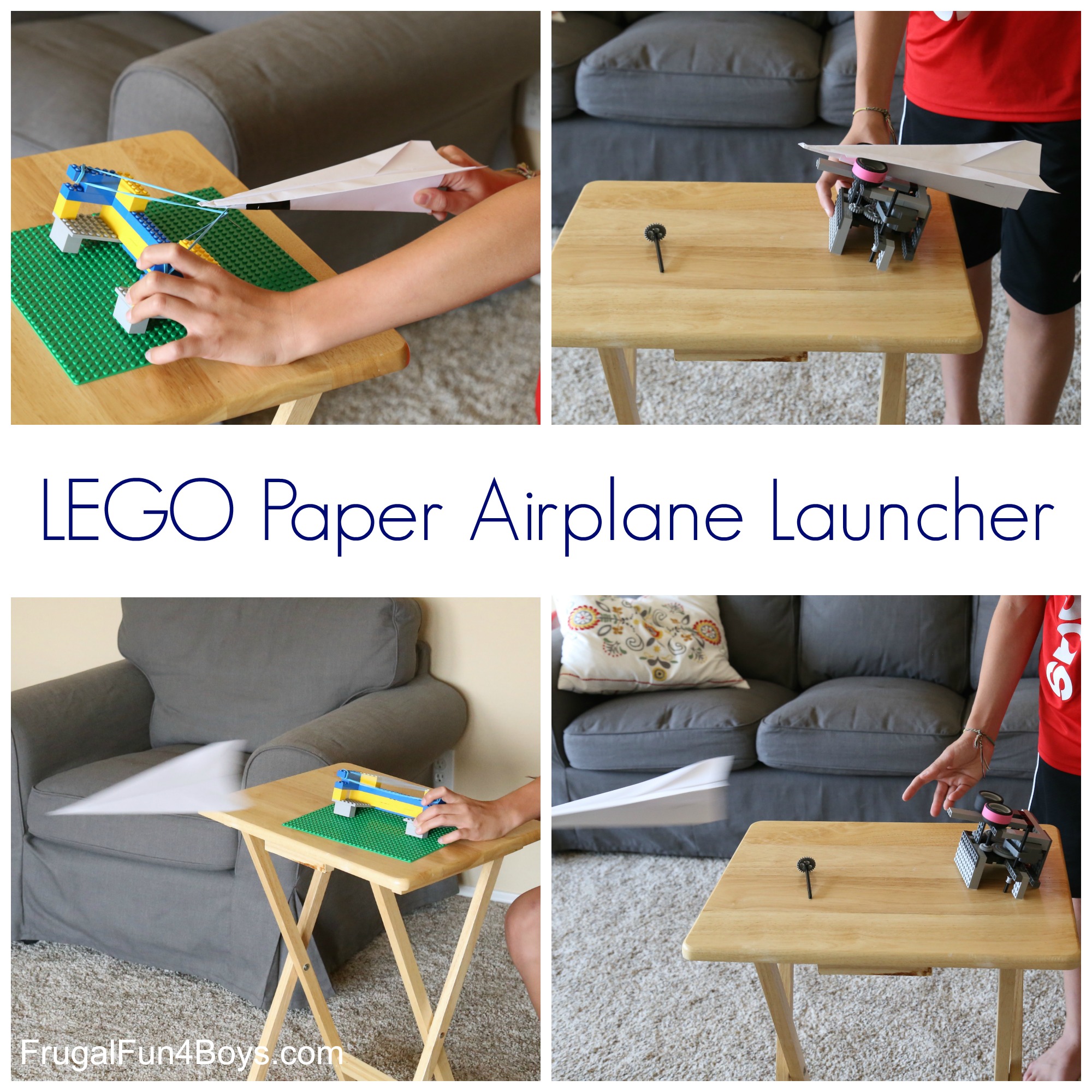