In the winter/spring, we were without health insurance for about 6 months while my husband went through a job transition. Now we have insurance again, and it’s very fabulous coverage! I found out that our vision plan has a $15 co-pay for eye exams, and glasses are almost totally paid for, and so I made appointments for myself (the dog got into my glasses several months ago and they’ve never been the same) and for Gresham (because he’s 6 and has never had his eyes checked).

Gresham has never complained about his vision. He reads well above his grade level, and enjoys reading for fun – for an hour a day or more! His only symptom has been sitting really close to the TV. My husband got glasses when he was about 11 years old, and I got glasses in college, and neither of us have a very strong prescription, and so we did not really suspect that our son had much of a vision problem, if any at all. 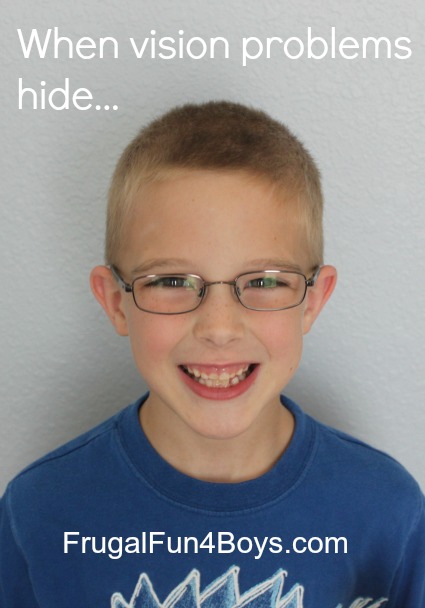 Anyway, at the eye doctor’s office, it didn’t take long to discover that Gresham had something going on! The doctor announced that Gresham is not using his left eye and asked if I had noticed. Um, no! I hadn’t noticed at all! She asked him to focus on a bead that she held a few inches in front of him. Then, she covered one eye at a time. When his left eye was covered, it would roll toward the center, but when she covered the right eye and forced him to use the left, it would jump back into action! It was pretty weird to watch.

The diagnosis: Gresham has moderate farsightedness (can’t see close up), with a prescription of +4. He also has some astigmatism in both eyes. His eyes see about the same as each other, so he does not have a true lazy eye. His eyes just don’t work together very well. Because of the fact that his eyes don’t work together, he can’t see in 3D at all, so the doctor said not to waste money on a 3D movie ticket for him! I’m not sure how much depth perception he has, but I’m sure it’s not great even though it doesn’t seem to affect him.

The thing about farsightedness is that kids can compensate for it really well. That means that Gresham actually could see fairly clearly. But his eyes were working extremely hard every day just to see. During the exam, he had to have his eyes dilated to get his eye muscles to relax enough that the doctor could figure out what his prescription should be. Gresham’s new glasses will enable his eye muscles to relax, and his eyes should learn to work together again. We go back for a follow-up appointment in a few weeks to see how his eyes are doing with the new glasses.

Gresham has had his glasses for four days, and he LOVES them. He didn’t think he would. In fact, he cried about having to get them. But now that he has them, he has worn them every waking moment. And he is so much happier! He never smiles for pictures, but when we came home with his new glasses, he was just grinning from ear to ear!

Gresham is not a kid who complains (we’ve had a ruptured ear drum because he didn’t mention that it hurt until it was extremely bad), and he didn’t appear to have trouble seeing. So who knows how long his vision has been bad!

In hindsight, here are the warning signs that I see:

Classic warning signs that Gresham did not have:

If you can afford it, I would highly recommend scheduling your child a vision appointment with a full-service doctor (not just the doctor at Walmart or Eye Masters, unless you know a good one). Gresham probably could have passed a screening if he were in public school because his eyes were working really hard to compensate for his poor vision. It took more attention to get to the bottom of his problem. I’ll be taking the other boys later this summer!

Have you had the experience of not realizing your child had a vision problem? What tips can you add?