We’ve been having so much fun with Christmas crafting! Our latest project is these Woodland Animal Christmas ornaments. Felt is such a great material to craft with because it’s inexpensive and comes in so many fun colors.

I’ve included printable patterns for each animal at the bottom of this post, and I think that kids will have a blast making these ornaments! And of course, adults will enjoy making them too – I did! 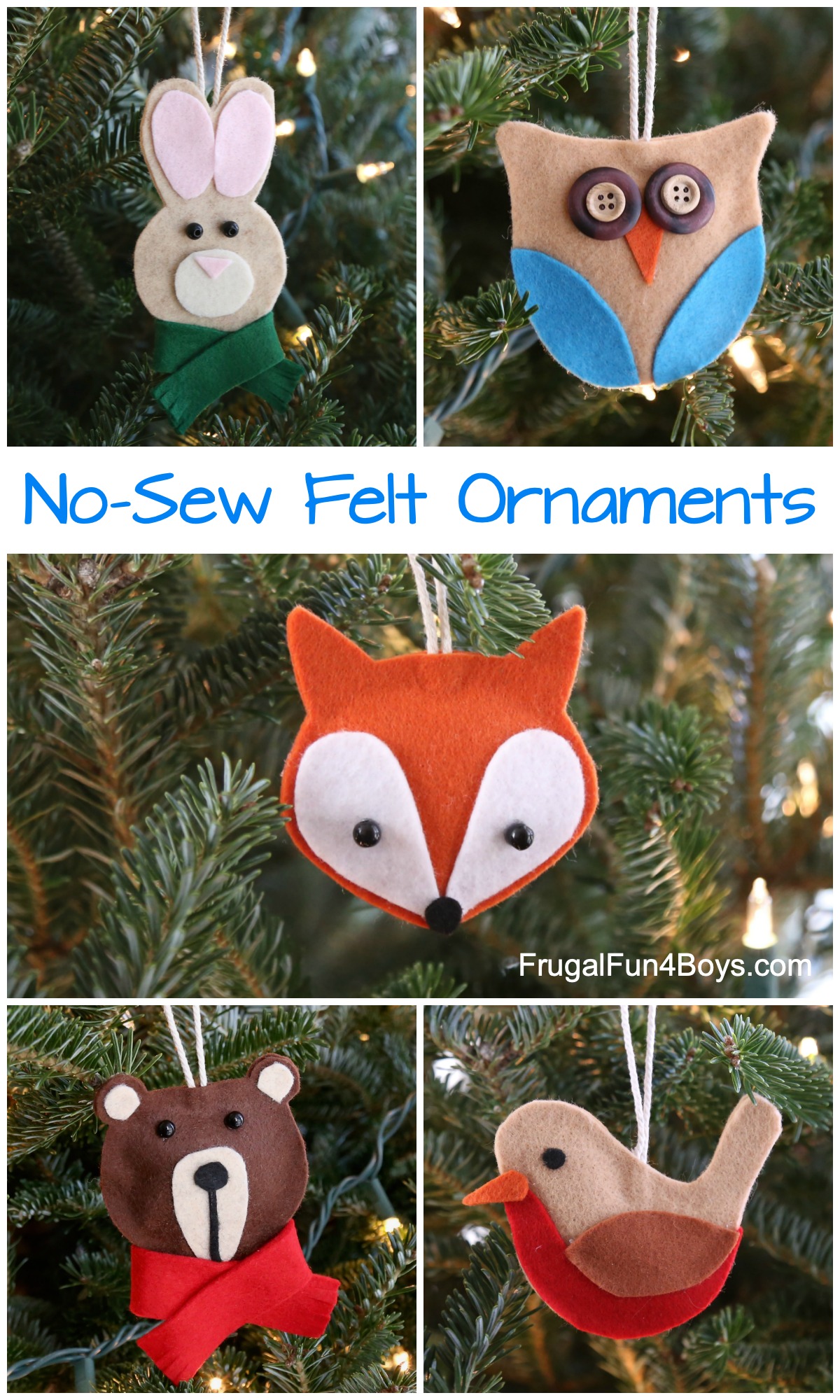 There are 5 animal ornaments to make: a bunny, a bear, an owl, a robin, and a fox. It’s so hard to choose a favorite! 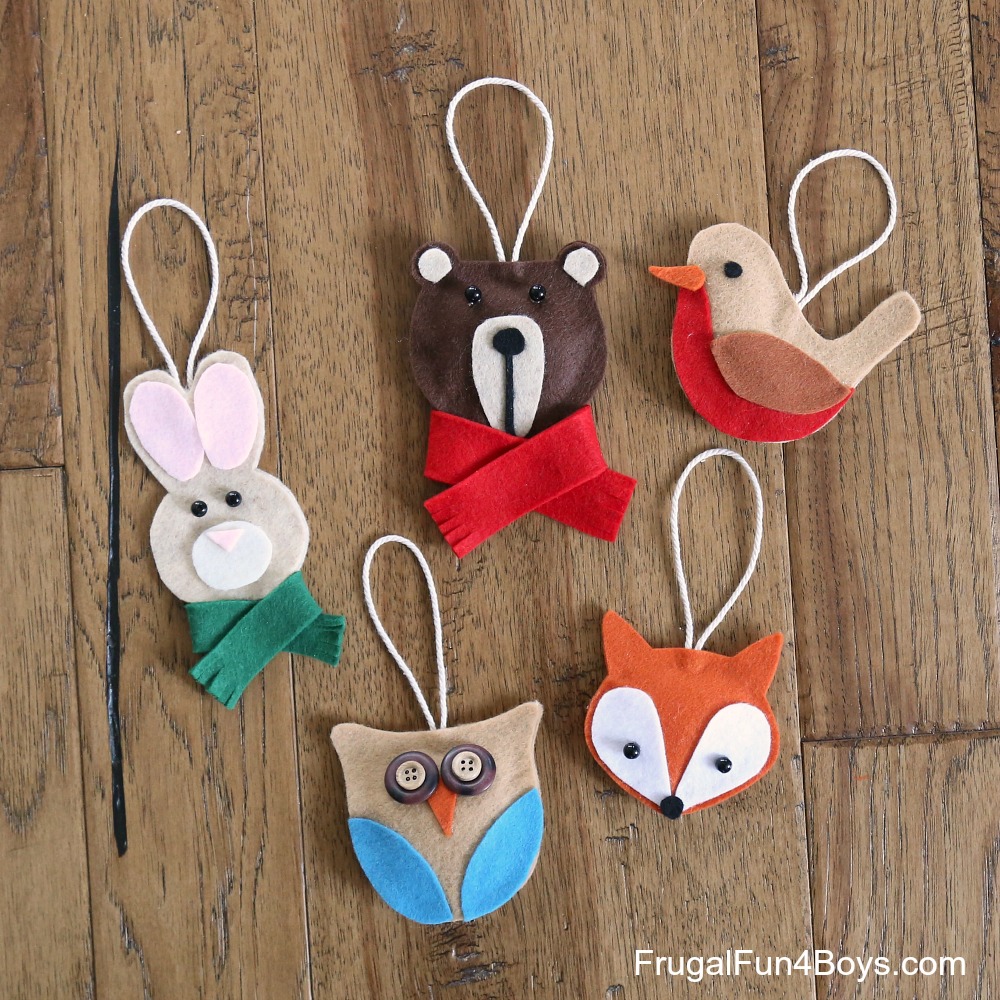 You can make these ornaments by sewing a blanket stitch around the edges of the felt, but hot glue works just as well. Okay, maybe the blanket stitch would be a little more cute, but I think these turned out really adorable!

Felt in lots of fun colors

Buttons for the owl’s eyes

How to Assemble the Ornaments

I recommend pinning the patterns to the felt – it makes it much easier to cut them out. 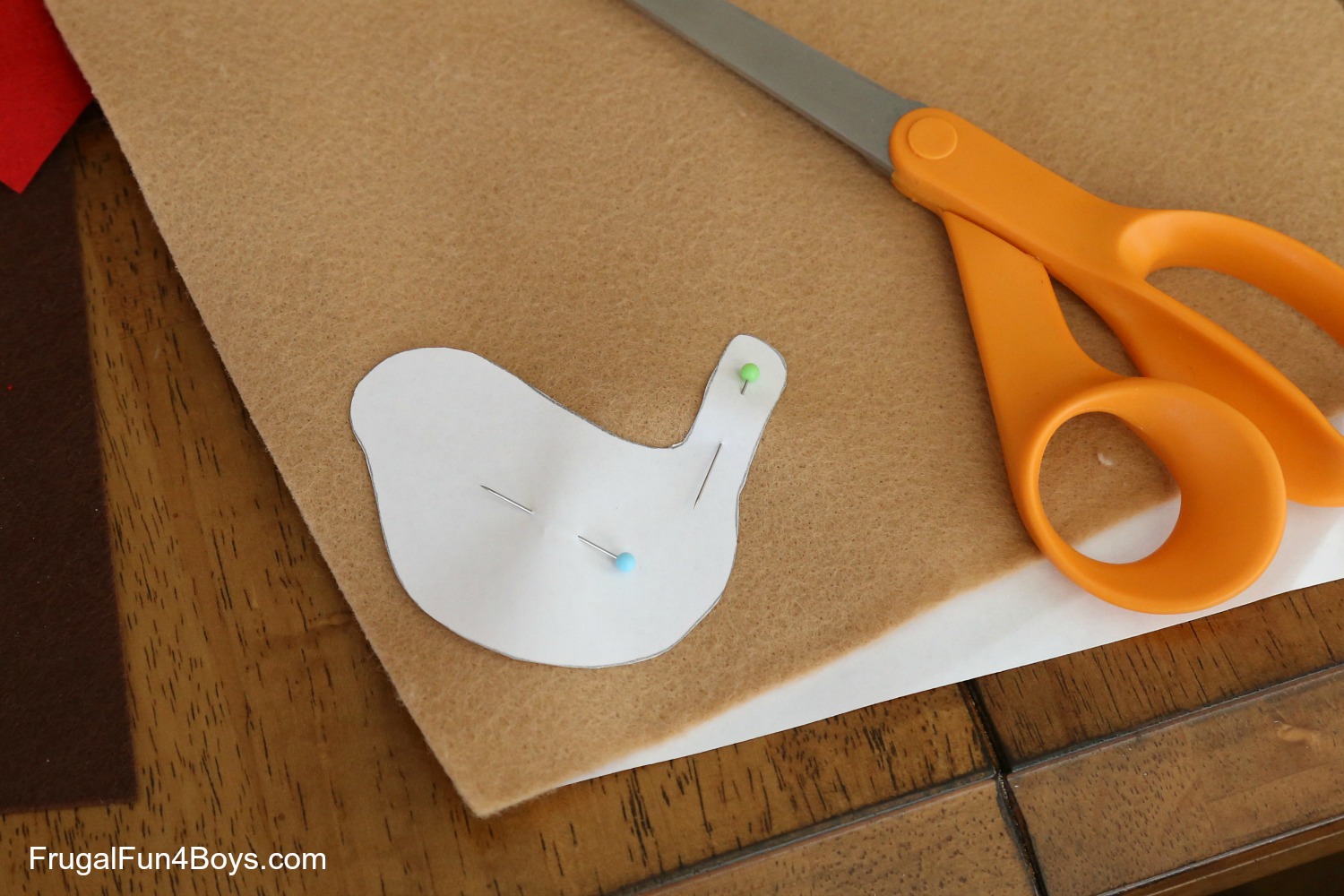 You’ll want to cut two of each animal’s shape. Then cut out the detail pieces and glue them on. We used hot glue, but Tacky Glue works well also. I used Tacky Glue for the thin line on the bear’s nose – it was too thin to hot glue without burning my fingers!

The bear, fox, and bunny have bead eyes that are hot glued on. (Don’t use too much glue – you don’t want it to ooze around the edges!)

Cut a piece of yarn for hanging the ornament. 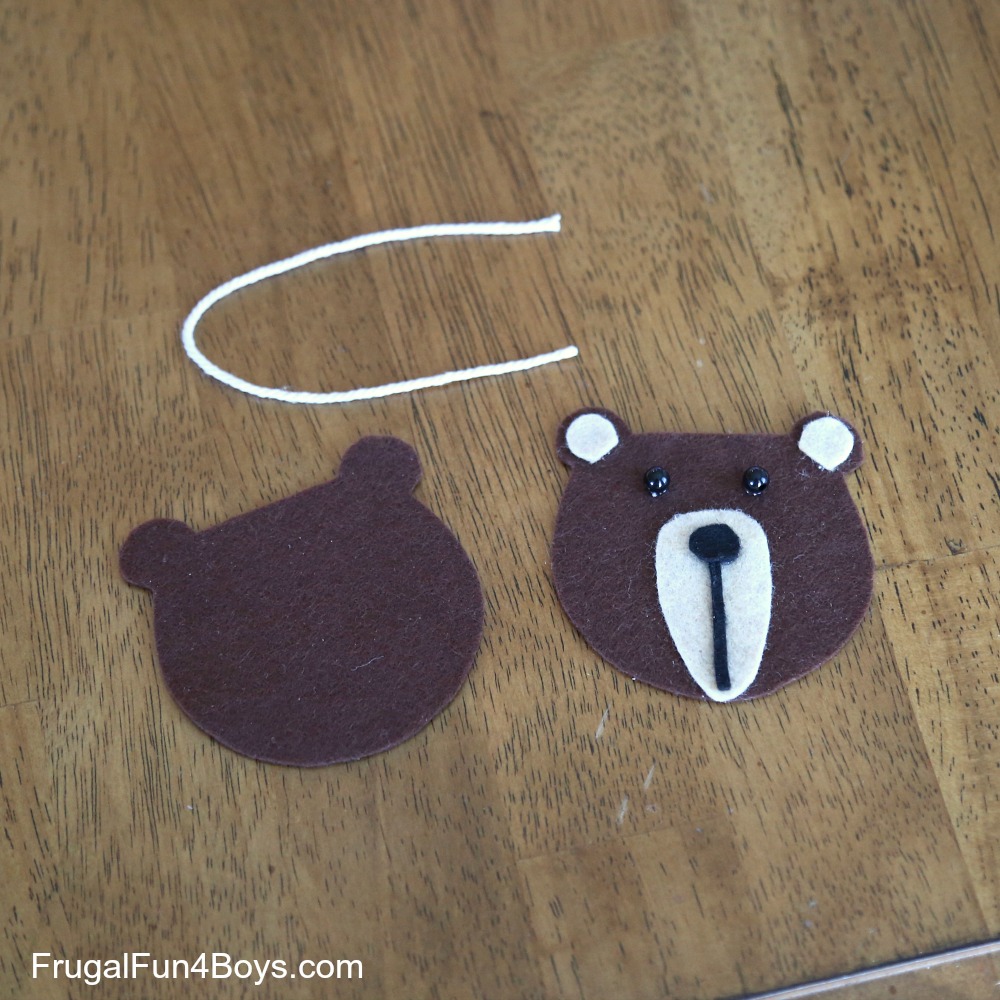 Glue the string to the bottom of the head before gluing the head pieces together. 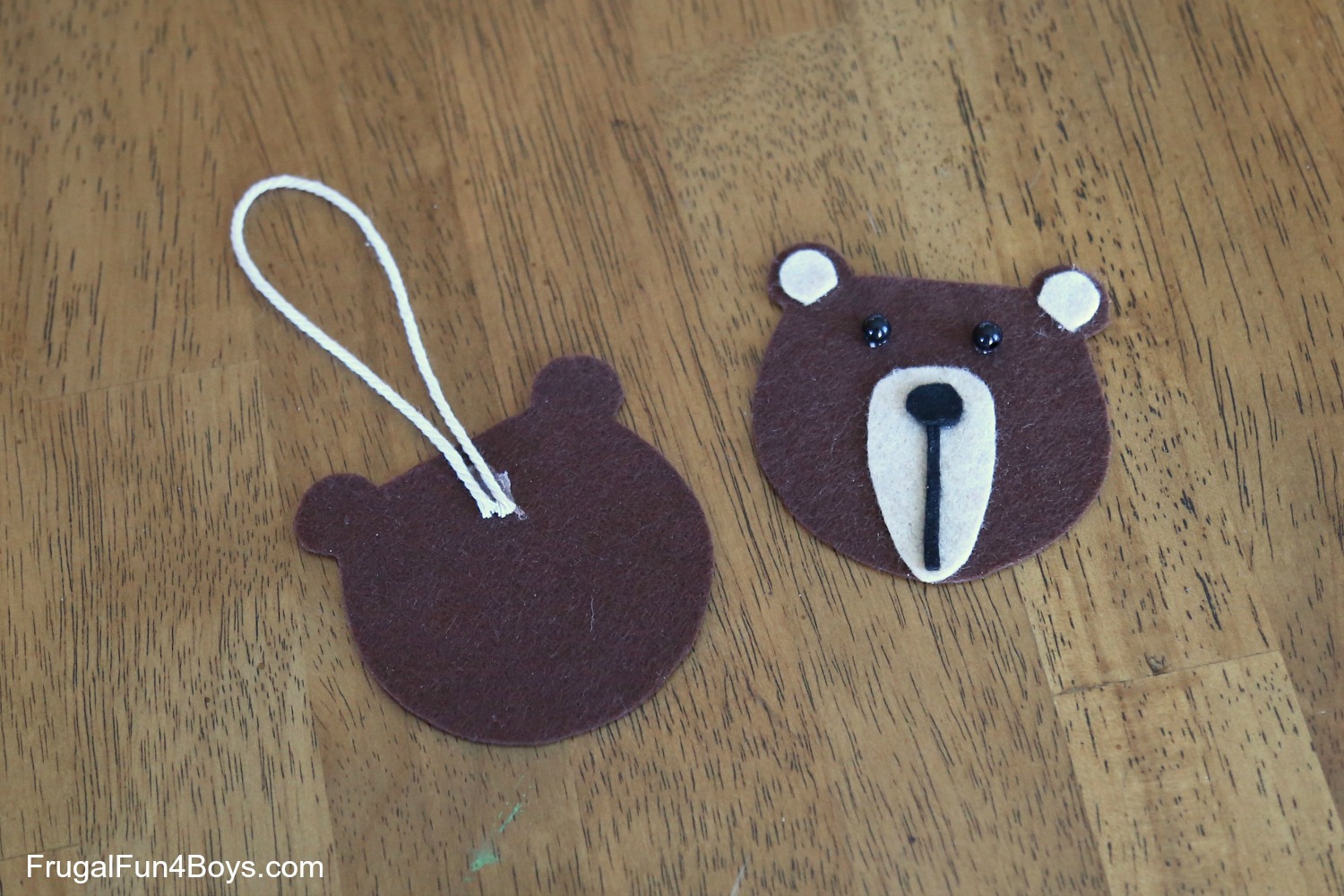 Then put glue around the ears and the top of the head. Glue the edges of the felt only so that you can stuff the center with a little fiber fill stuffing. 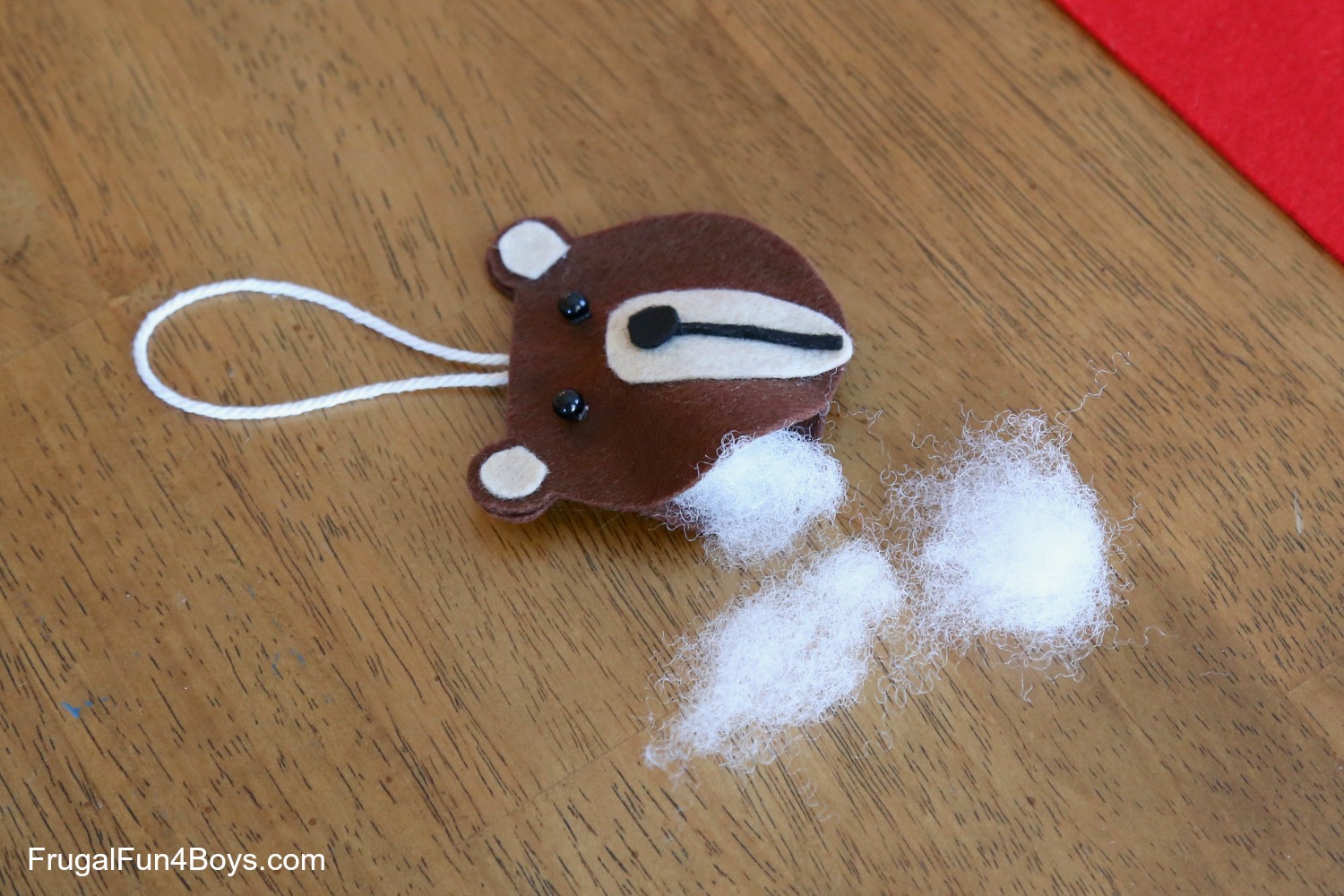 Glue all the way around the head, but leave a little opening for the stuffing. It doesn’t take much stuffing! Push it in, and then glue the final section of the head closed.

Cut a strip of felt to make the scarf. I used extra thick felt that we bought at Hobby Lobby. Glue the scarf to the bottom of the back of the bear’s head. 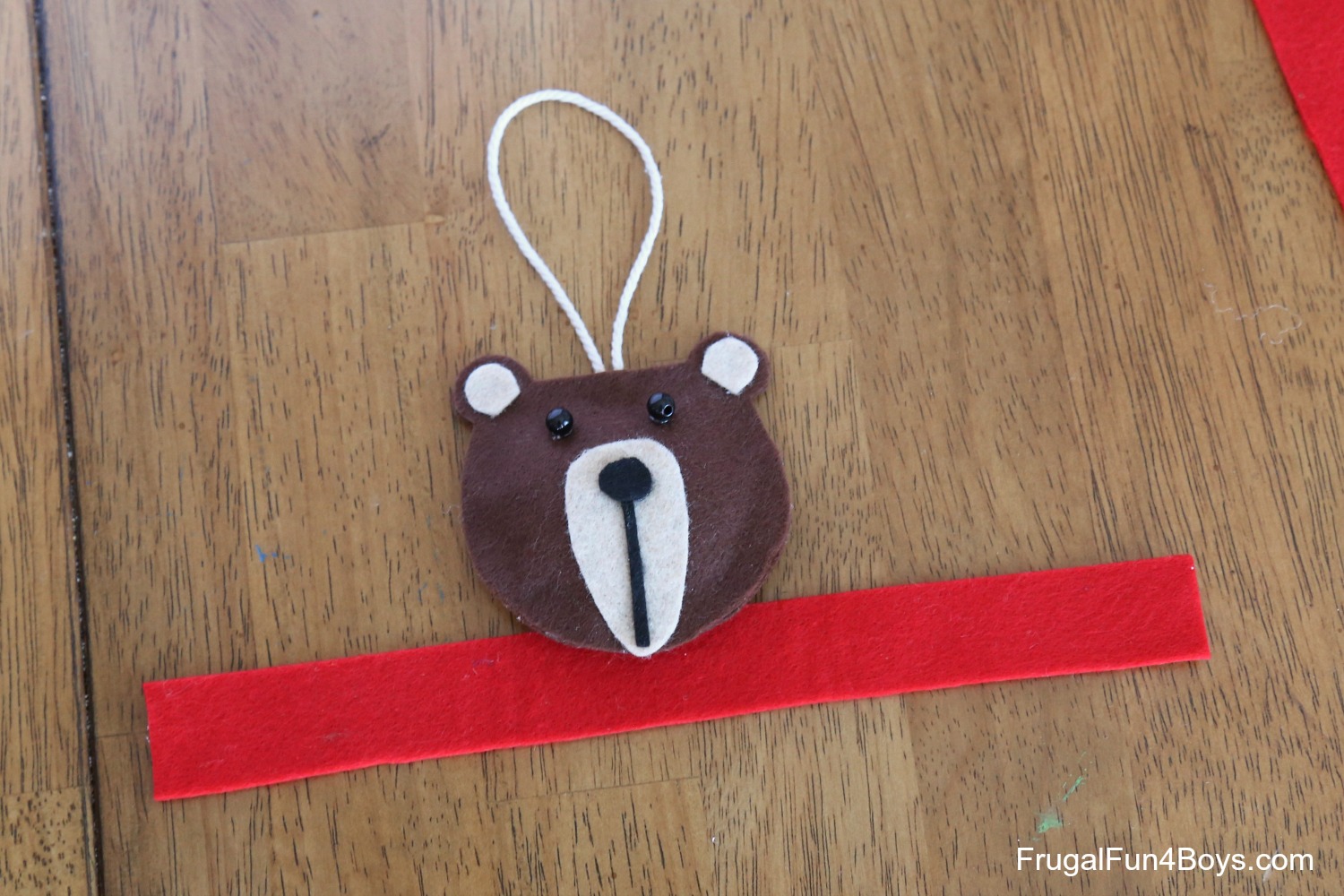 Then fold it over and tack it down with more glue. 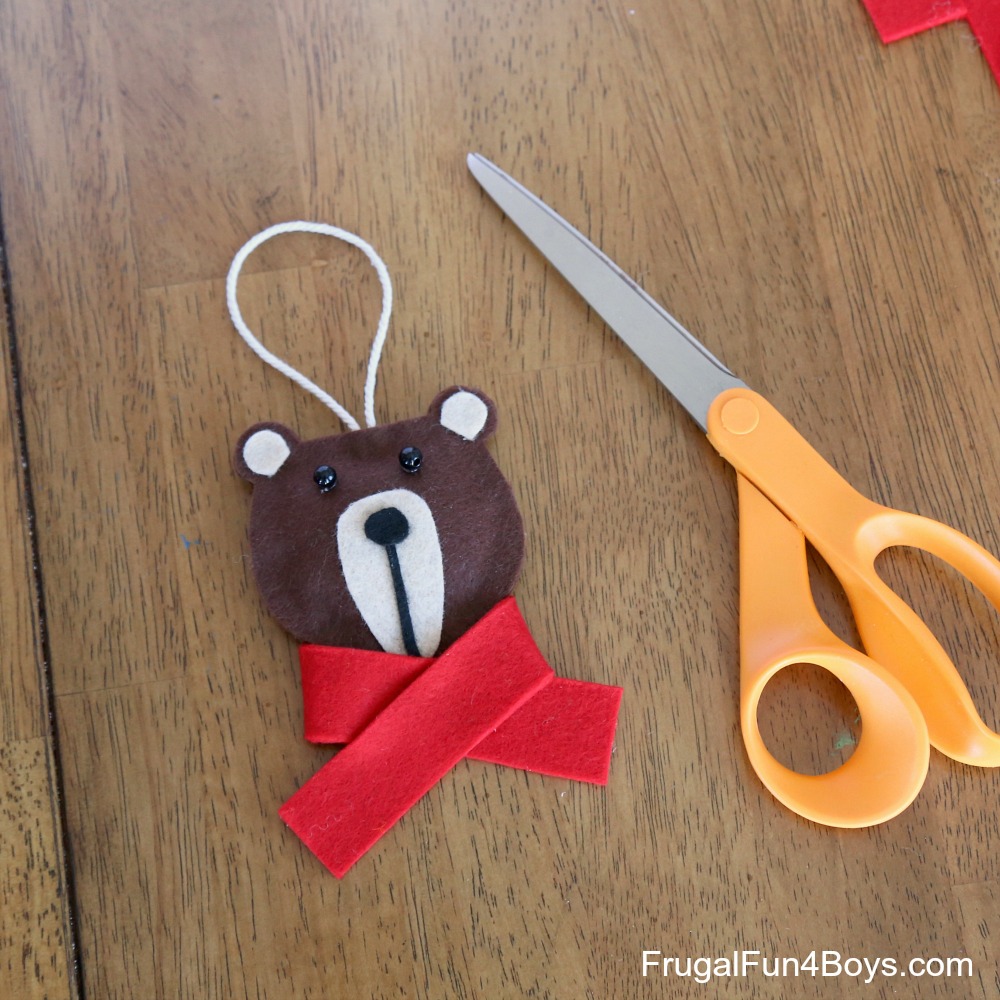 After you glue the scarf, trim the edges so that they are even and cut some fringe. Then hang him on the tree! SO adorable! 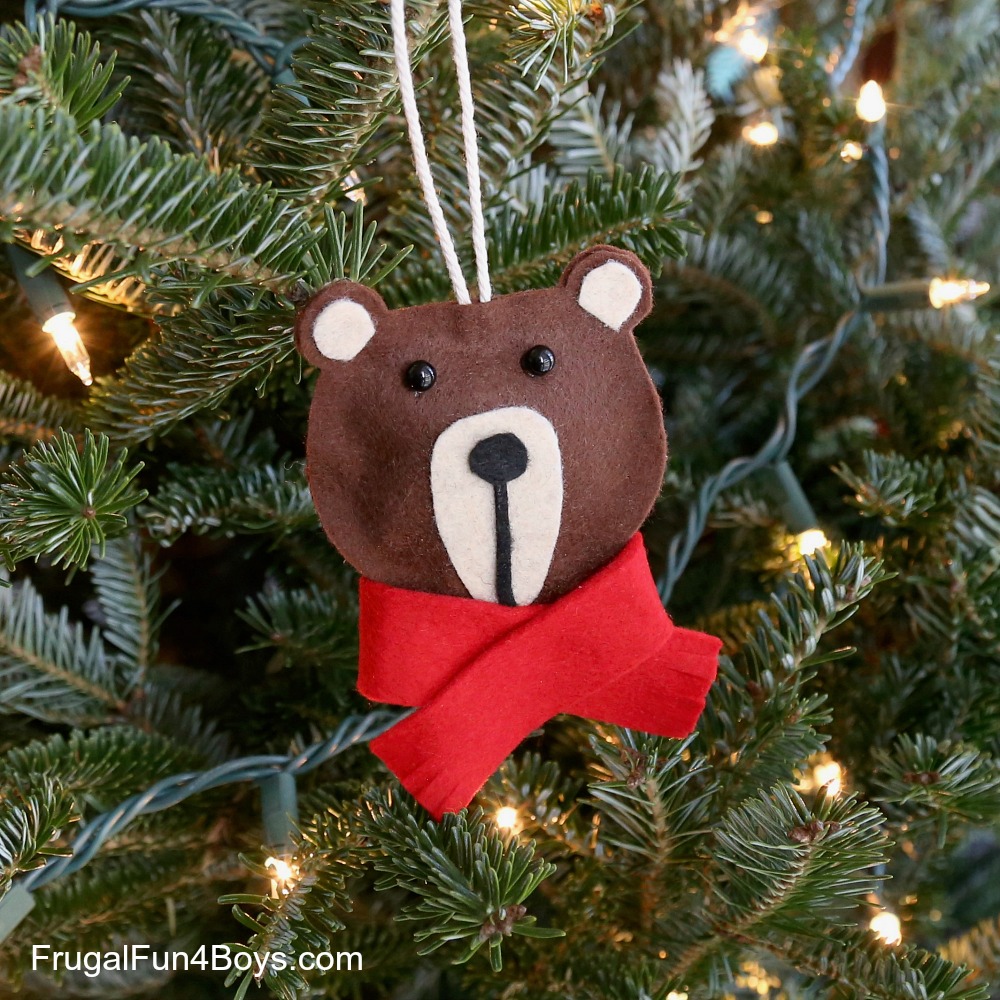 Then make a bird… 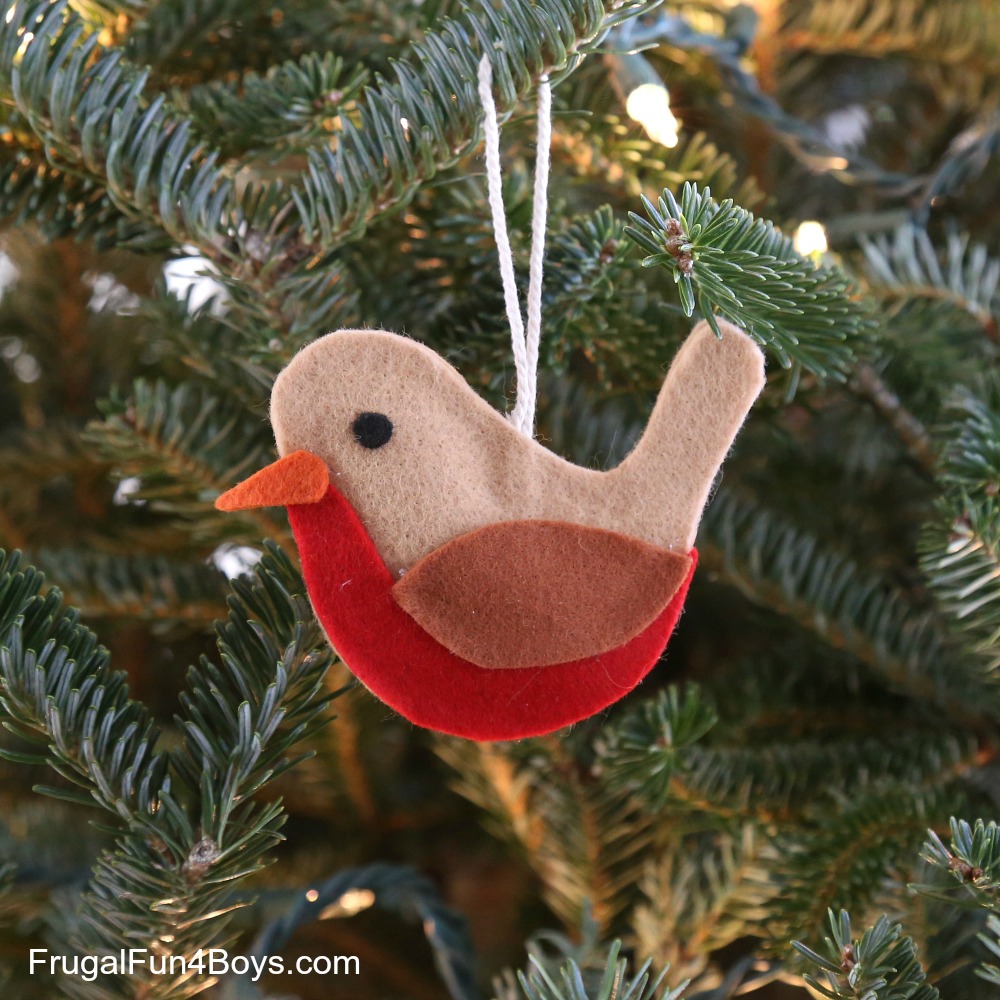 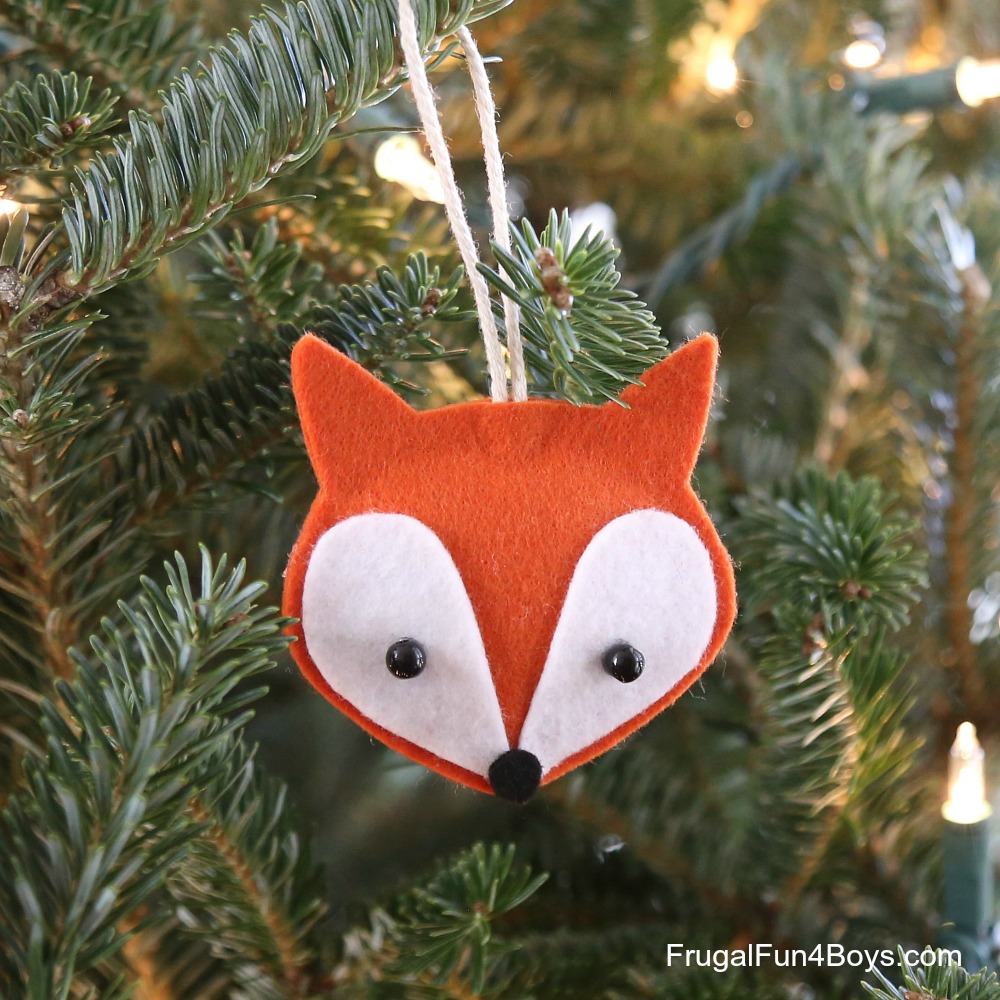 I used buttons for the eyes. 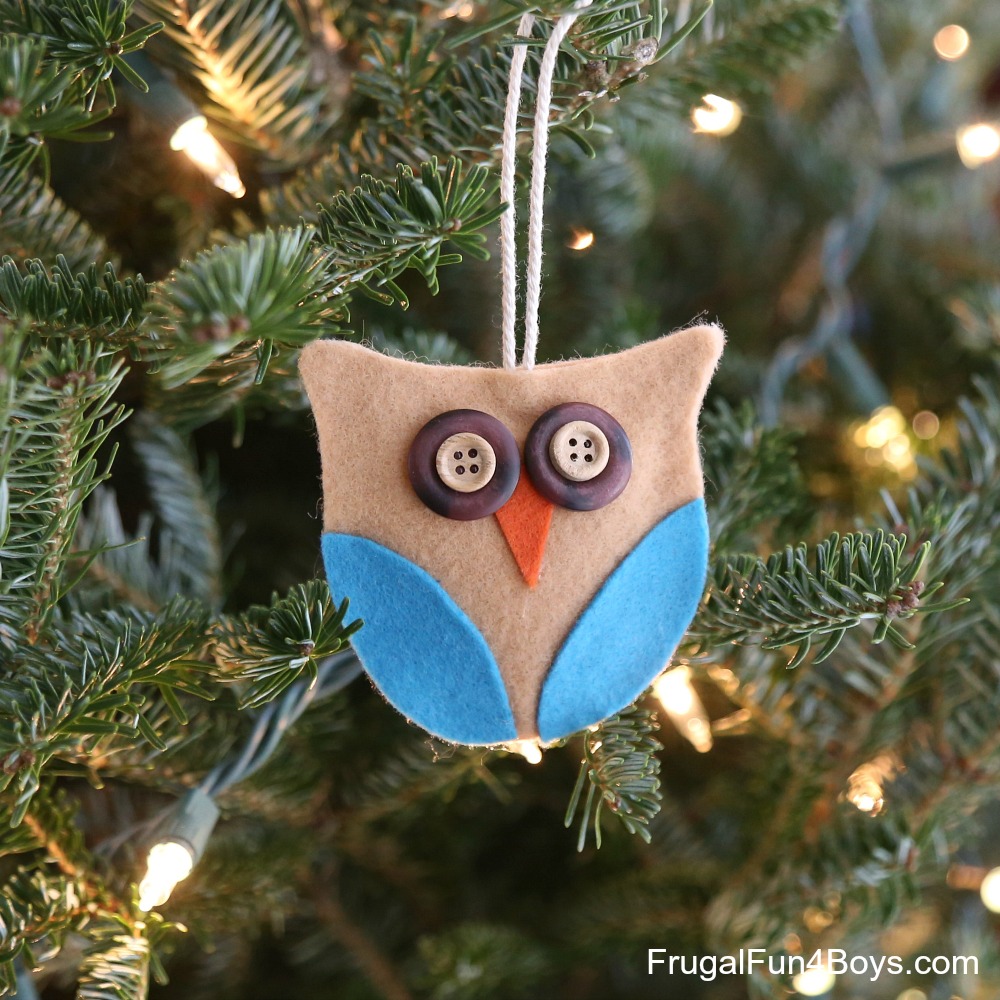 And a bunny! Make the bunny’s scarf the same way as the bear. The bunny does not have stuffing in its head, since the size is smaller. 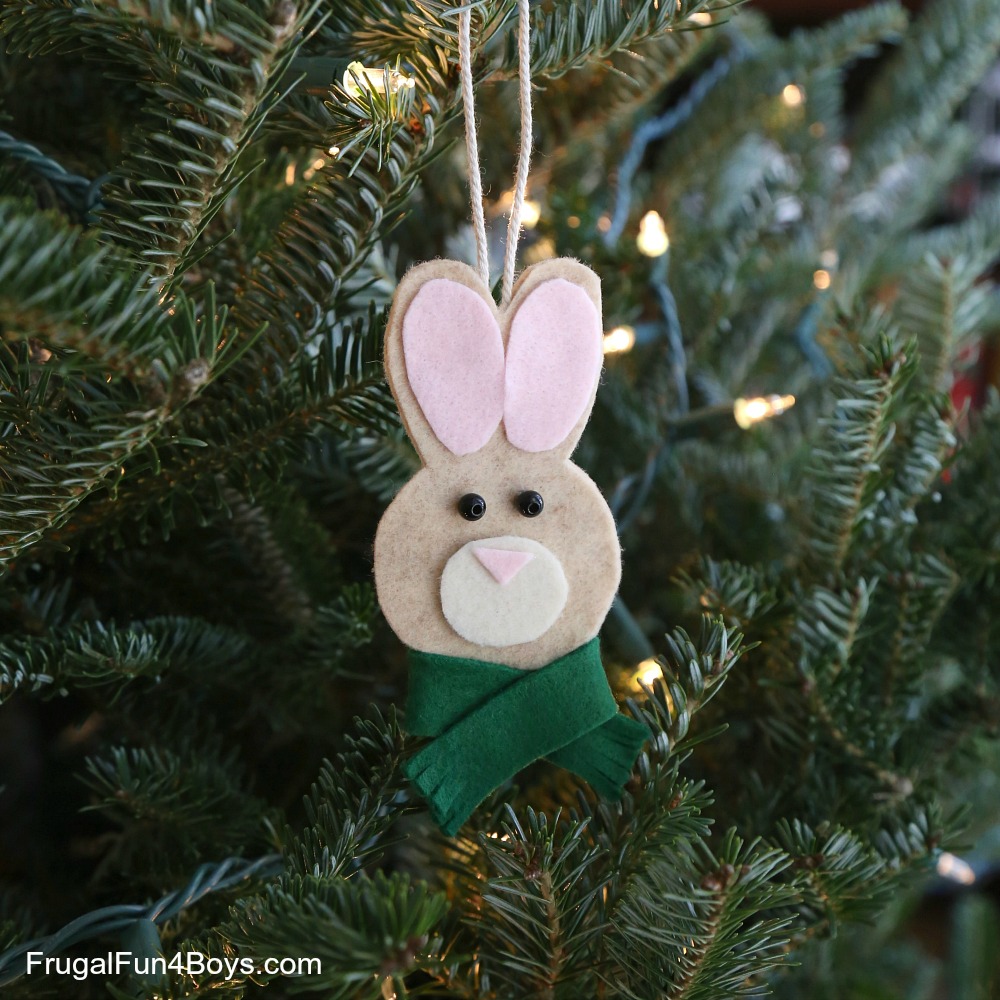 Note that the patterns do not include patterns for the bear’s black nose, the beaks, the bird’s eye, and the pink part of the bunnies nose. Those are just too tiny for a pattern! I think you’ll be able to cut them out on your own. Getting the body shapes right is the hard part, and there are patterns for those. 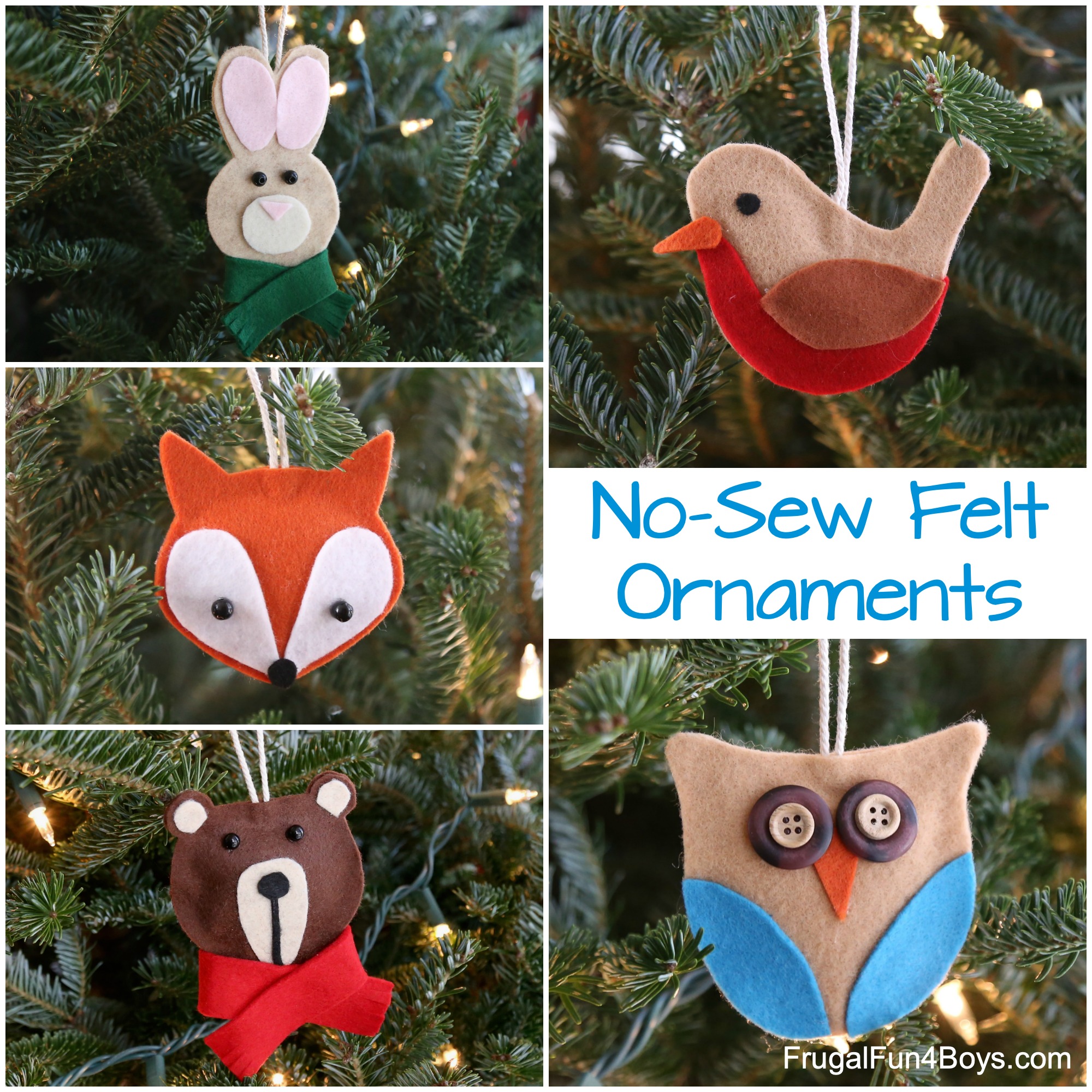