Ah, sibling fighting… One of my least favorite parts of parenting! Lately, it seems like every word out of my boys’ mouths is rude. We have had everything from the standard fighting over toys and fighting over turns to bossing and parenting each other to showing NO grace for the most minor infractions. 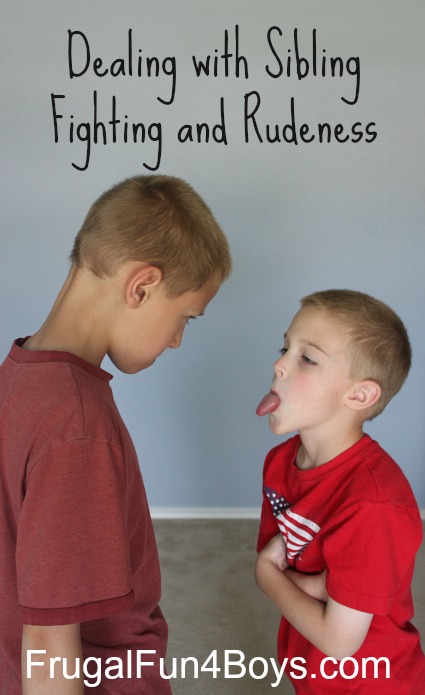 Unfortunately, I don’t have a magic cure for sibling fighting to offer you. But I do want to share something that we did this week to help make God’s Word applicable to all of our lives, even mom, because sometimes I respond to their rudeness with more rudeness and impatience!

First, though, let me say that when it comes to conflict, there are two areas to address. The first is to deal with the situation from a practical standpoint. We need to manage our kids’ behavior. This may involve sending children to separate locations for a while or removing toys that have become a continual problem. But it shouldn’t stop there, because the second area that we need to address is the heart! As moms, we can’t change our children’s hearts – that is the work of the Lord. But we must be diligent to present the Bible to them in appealing ways that show how much we value what God has to say. There are many verses that deal with conflict, so you can keep it fresh even though this issue will come up over and over and over!

Here’s what we did this week: 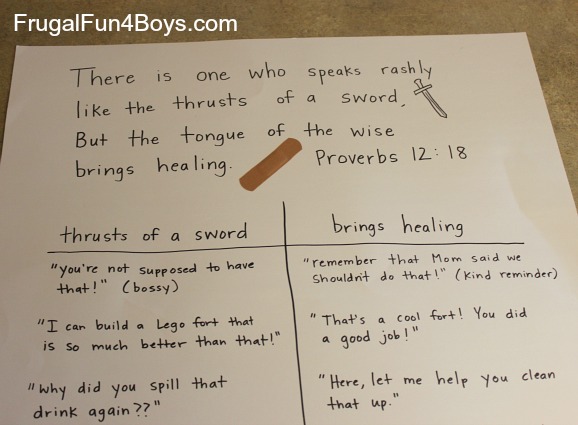 We have been focusing on Proverbs 12:18, which says, “There is one who speaks rashly like the thrusts of a sword, but the tongue of the wise brings healing.”

Isn’t God so amazing to give us words that little boys can relate to? What a word picture! It’s easy to see how an uncontrolled tongue has the same result as sword thrusts. In Scripture, we often see the principle of putting off something, and putting on something instead. It’s not enough to say, “Stop being rude.” We need to replace rude with words that bring healing!

Principle: If you have said something rude to one of your siblings, you need to add words of healing by speaking kindly or doing something to serve that sibling.

This idea came to me while I was out to eat with all four boys, and one of them spilled a drink. It was an accident, but a brother spouted off an ugly comment without thinking. I asked that brother to get out of his chair and say to the one who had spilled, “Here let me help you clean that up.” It took 3 tries to say it with the words that I had asked him to use, and with a kind spirit, but he did it! And then I asked him to get paper towels and serve his brother by cleaning up the mess. It was amazing to see how that act of service (even though it began as unwilling service) softened the attitudes of all of the boys.

We made a chart to help us see how this concept should look day to day. Here are some examples:

Thrusts of a sword: “I can build a better Lego fort than that!”

Tongue of the wise: “That’s a cool fort! You did a good job!”

Thrusts of a sword: “Give me that! You can’t use it because it’s mine!”

Tongue of the wise: Say nothing and allow the other person to enjoy the toy (unless, of course, they are too young for it or are breaking it). Sometimes, the tongue of the wise is silent!

Thrusts of a sword: “Stop it, you dummy!”

Tongue of the wise: “Please don’t hit me with that.” (And then going to mom for help if the hitting continues, rather than getting angry.)

Satan would love for us to believe that those sassy comments we want to say will make us feel better, but it’s a lie. The tongue of the wise truly does bring healing! We put a few entries on our chart, and then we have thought of more as the week has gone on and ugly words have presented themselves. Focusing on replacing the rude with words that are kind has made a definite difference at our house. I have no doubt, however, that we’ll be back in a cycle of fighting before long at all, and then we’ll be back in the Scripture again!

For more on sibling conflict:

Sibling Squabbles and the Kindness Car (another idea for encouraging service)