Recently, I have gotten a couple of comments from people who are totally amazed at how much I get done with having four boys and all! I do post a lot of activities on this blog, and the main reason is that at the stage of life we are in, the boys must have something to keep them busy, or we will all go crazy! School every week for 3 boys of different ages = lots of blogging material! Also, the thing about blogging is that the writer gets to choose what to post. I really do attempt to present an accurate picture of our life, but at the same time, I don’t want the focus of my blog to be my children’s struggles and messes, the mountains of laundry, and all of the mistakes I make because of my overworked “mom-brain,” because that doesn’t really benefit anyone.

But trust me, they are there!

In an effort to keep it real, lest any of you get the idea that I am supermom or anything, let me tell you about the past few days… 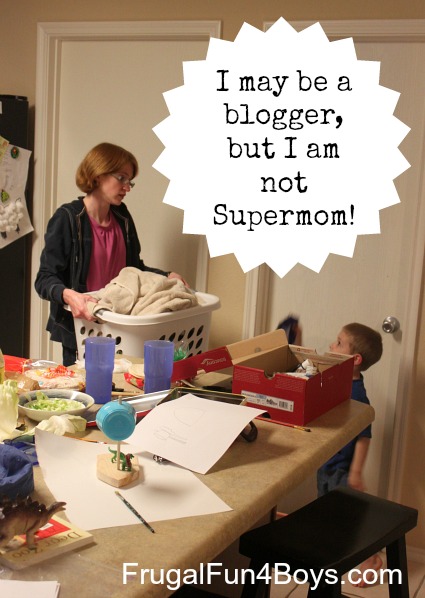 On Thursday, we went to church so that my son and three of my violin students could perform a couple of fiddle songs at our church’s ESL classes. I planned for us to kill an hour or so after we played our songs, and then come back to the church so that we could go out for lunch with my mom, who is the ESL program director. I brought the camera along, and figured that we could take some bluebonnet pictures. Now, if you’re not from Texas, let me explain that taking pictures in the bluebonnets is a must for Texans in the spring! And we have only managed to do it ONCE in 9 years of having children!

We drove a few miles down the freeway, parked along an exit ramp, and wandered through the mud to a really beautiful spot. I posed the children (while trying to keep them from getting muddy) and started snapping pictures. Except that there was NO MEMORY CARD in the camera. FAIL!

On Friday, my hubby and our oldest son went on a camping trip with the Awana T&T boys and dads (3rd-6th grade). The first thing the boys did after they left was to break a glass jar on the back porch. We got all that cleaned up quickly, because I had a late afternoon appointment to take Gresham to be evaluated by the kindergarten teacher at the school where I used to teach strings. On the way to the school, Owen asked, “Is Frodo (the tortoise) still in the backyard?” I gasped and realized that he was! I had told the boys to put him out there (trying to keep him healthy with some real sunshine – if you’ve followed our pet turtle saga, you’ll know why!) and I totally forgot about him. He can easily fit under the fence, and despite being a tortoise, he’s actually pretty fast!

Frodo the Tortoise loves to be outside! 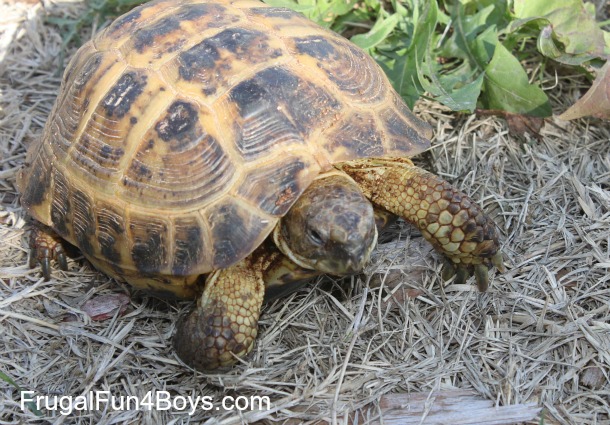 I quickly called a neighbor, and she and her daughter went over to our back yard to look for Frodo. They called a little while later to say that he was not in the yard, or behind the yard (our house backs up to a greenbelt with trees and a creek), or in the next-door neighbors yard. Great! The tortoise was gone and it was Mom’s fault! Thankfully, no one was crying at this point.

We decided to forego dinner out after the appointment, and came straight home to look for the tortoise. Thankfully, God graciously answered our prayers, and I found him two houses down in the greenbelt area. Whew!

On Saturday, the boys wanted to go “somewhere fun,” especially since Friday night ended up being a bust. I told them that I would find somewhere fun to go. They wanted to go to the zoo, but unfortunately, a toilet repair on Friday morning required the extra money we thought we might have. I told them that I would take them to a really fun playground that we have not been to in at least a year. We drove 20 minutes to the playground, and it was GONE! The park was still there, and the baseball fields, etc., but the playground had been completely removed!

While we were sitting in the parking lot deciding where to go next, Owen announced that he had gone potty in his pants. Lovely. Since we had not brought a change of clothes (he’s almost 4 and never does this!), we just went home. We did stop at the store because I didn’t want to go back out again later!

So there you go. Our lives are far from perfect! I am another mom in need of God’s grace. Please don’t get the impression that I have it all together just because I write this blog!

I really like what Jamie at The Unlikely Homeschool has to say on this topic in her post The Ugly Truth About a Blog – great thoughts for anyone who enjoys blog reading.