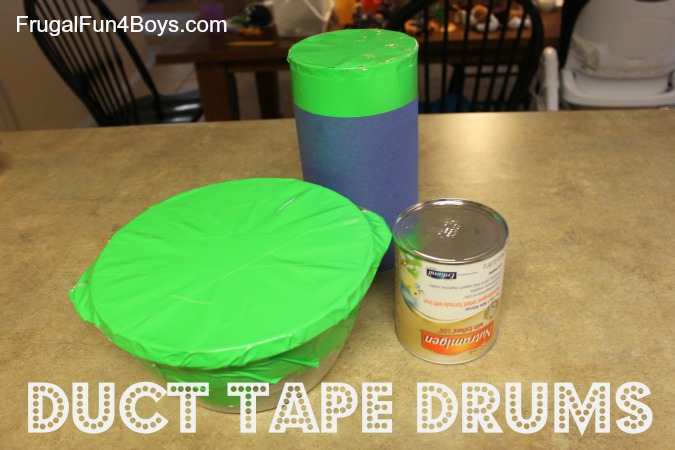 Several months ago, I saw this idea for duct tape drums on Journey into Unschooling, and tucked it away for future use. This past week, we did a preschool unit with the book “Berlioz the Bear” by Jan Brett, and after reading the story, we decided to make some musical instruments. I had been planning to let Owen make a rubber band instrument with the leftovers from Gresham’s spider web project, but the rubber bands stretched across the nails made surprisingly little sound. Time to pull out the duct tape drum idea!

The drums on Journey into Unschooling are better – she made them out of cylinder shaped concrete forms, and they’re bigger and probably louder. However, for this project we really needed to just stick to what we had on hand rather than buying anything. We used a large oatmeal container for one drum, and a disposable plastic bowl for the other. I also gave Owen an empty formula can to bang on. (At $23 a can for Nutramigen, it’s nice to be able to recycle the can!)

The duct tape makes a really pleasant sound for a drum! It’s satisfying to bang on, yet not annoying for the mom who has to listen to it all day. 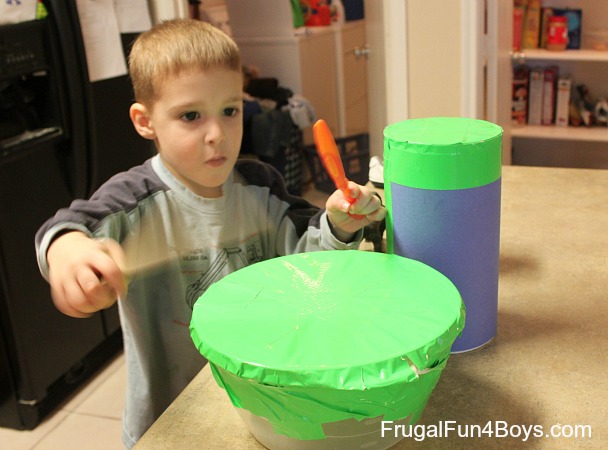 Owen tried out a variety of drumsticks – a wooden spoon, a baby spoon, and two pencils (the eraser ends). Throughout the week, the pencils got the most use.

Drumming with hands was also fun. 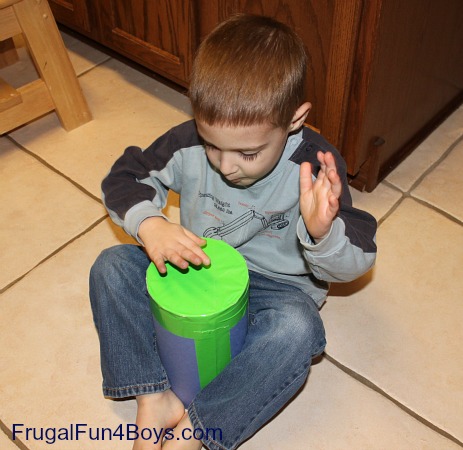 We cut the bottom off of the oatmeal container drum, and it made a better sound that way.

All of the boys enjoyed the drums. Aidan has been asking to learn how to play the drums for a long time. We’ve said no because we don’t want to purchase a drum set (or listen to it!), but I’m thinking of making him a couple drums with the cylinder concrete forms for Christmas and getting some basic drumsticks to go with them. He would be thrilled!