Warmer weather means its time to do some science experiments outside! Kids will love making a soda bottle rocket with simple household materials. This fun science demonstration is easy to do and will definitely impress your kids. Our rocket flew higher than our two story house!

This post was originally published in April 2016 and was updated March 2019.

At the bottom of this post, I have an explanation of the science behind it.

Want to see our bottle rocket in flight? Here’s a video demonstration!

Here is what you need to make one:

First, prepare your rocket. Basically, all we did was to build a stand for the rocket. We were concerned that adding decorations would make the rocket heavier, which would not allow it to go as high. 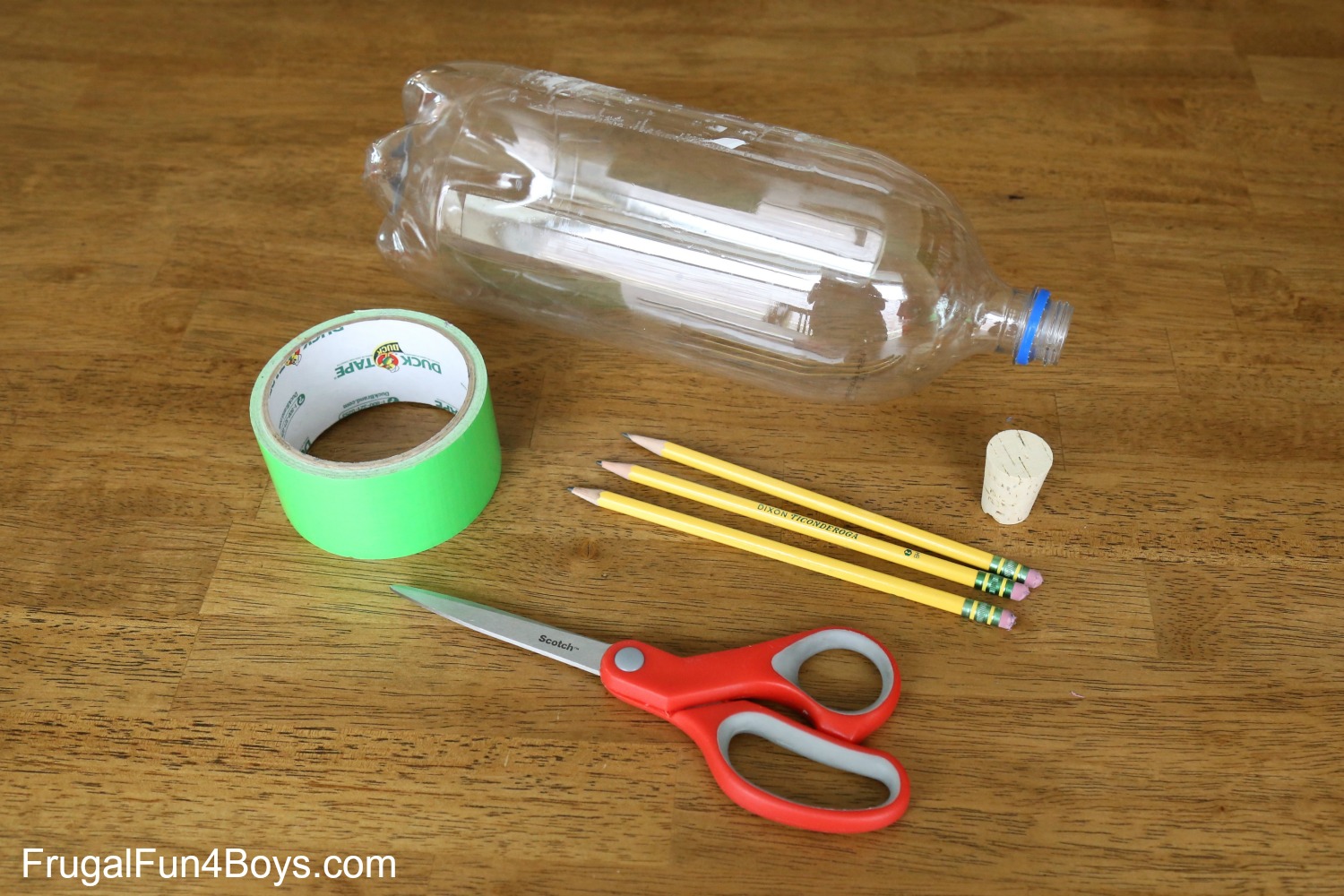 We went to a birthday party a couple weeks ago and made a bottle rocket with a water bottle. They used pencils as “feet” for the rocket to stand on, and I thought it was a brilliant idea! 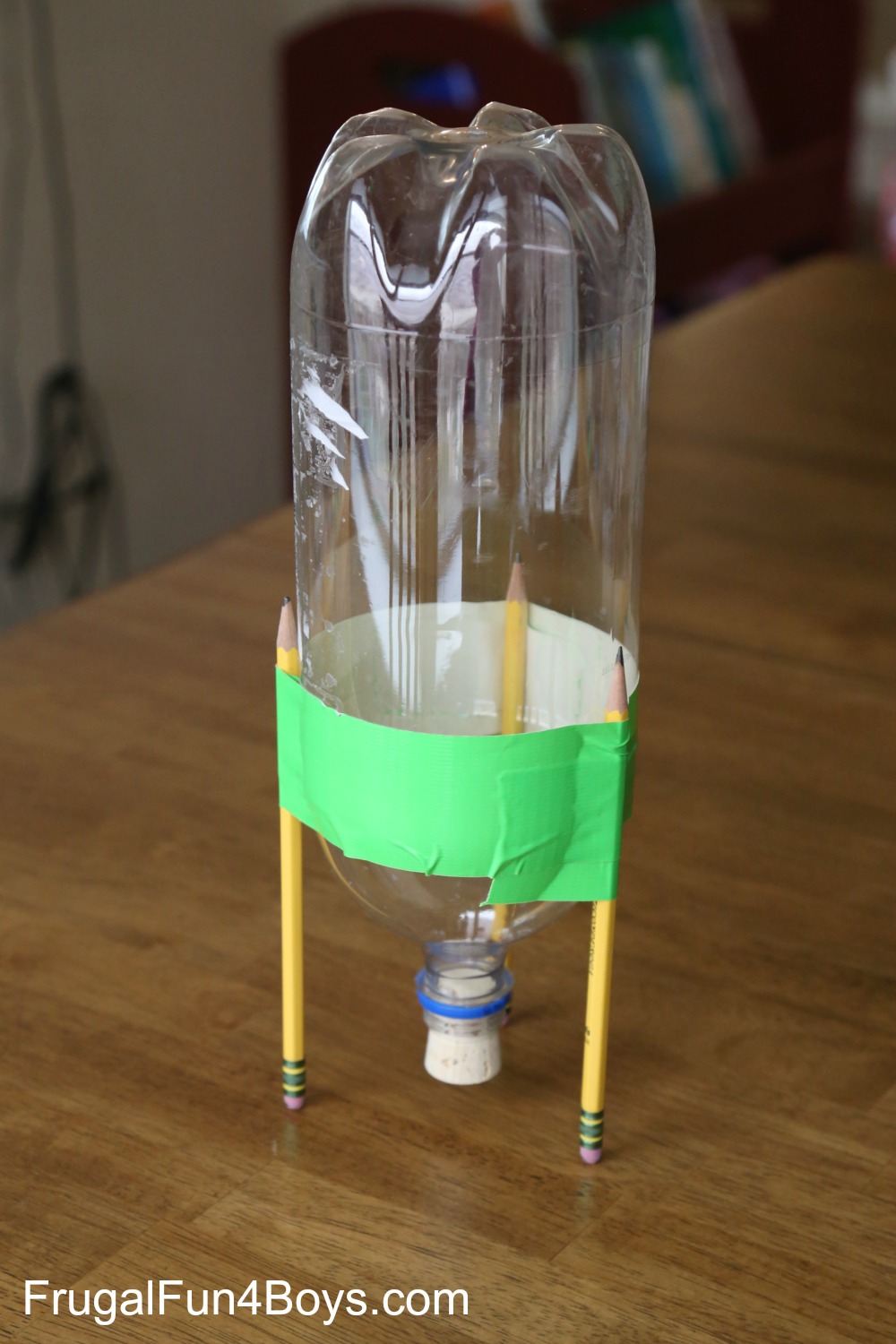 Once your rocket is ready, it’s time to launch!

Pour in some vinegar. We used about two inches worth, but again we didn’t measure.

(Turn this into a science experiment by using different quantities of baking soda and vinegar and recording how high your rocket goes!) 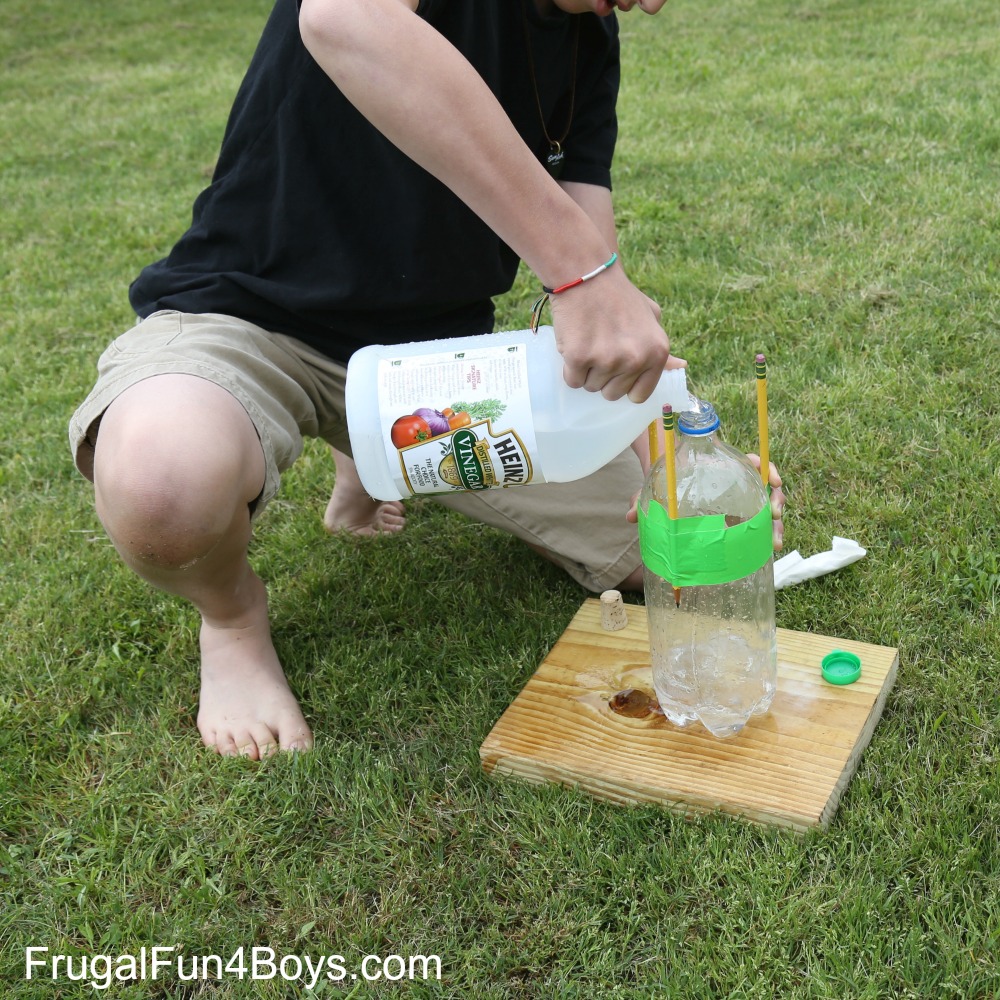 After pouring in the vinegar, quickly push in the baking soda packet and then push in the cork. Turn the bottle over and wait for it to launch! It can take up to 30 seconds.

Be careful of pushing in the cork too tightly – our first rocket did not launch because of that, and when we pulled the cork out it had a LOT of pressure behind it. Once Aidan got the hang of how tightly to push it in, our launches were all successful after that. 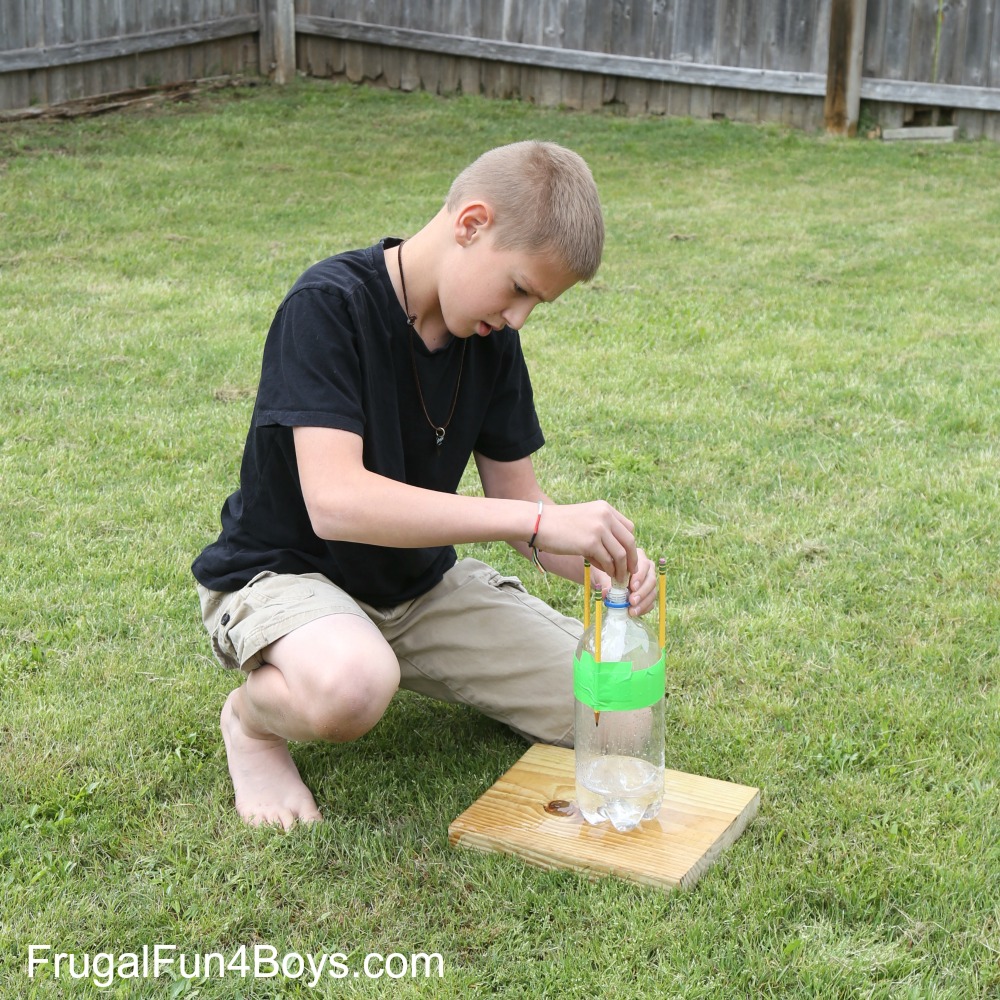 Be sure to stand back… It’s starting to foam!

LIFTOFF! What a great demonstration of Newton’s 3rd law of motion! 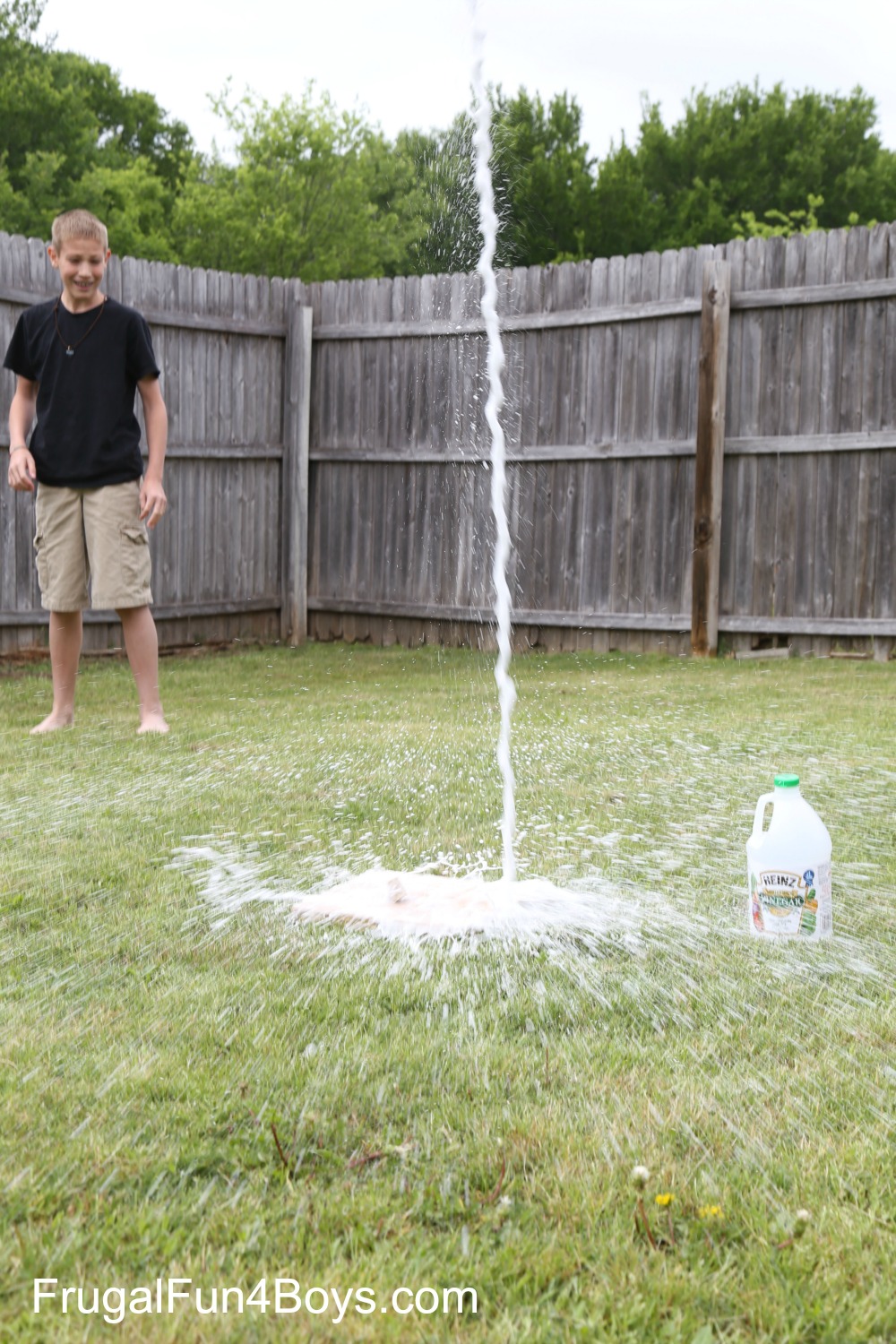 The baking soda and vinegar that we used in this bottle rocket create an acid/base reaction. Baking soda is sodium bicarbonate, and the chemical formula is NaHCO3. Vinegar, or acetic acid, is HCH3COO. A baking soda and vinegar reaction is actually two parts. It happens so fast that we don’t realize that it’s actually two reactions. First, carbonic acid is formed. This quickly breaks down into water and carbon dioxide gas. The other product of the reaction is sodium acetate, which you can use to make Hot Ice. All the CO2 gas that is formed by the reaction creates pressure inside the bottle. The pressure builds up until it pushes the cork out of the opening of the bottle. Then WHOOOOSH! We have liftoff!

The rocket flies high because of Newton’s 3rd Law of Motion, which states that for every action, there is an equal and opposite reaction. The CO2 gas and liquid push out of the bottom of the rocket, which pushes the rocket upwards with great force!

It’s a great time of year to get outside! Here are more fun backyard projects: 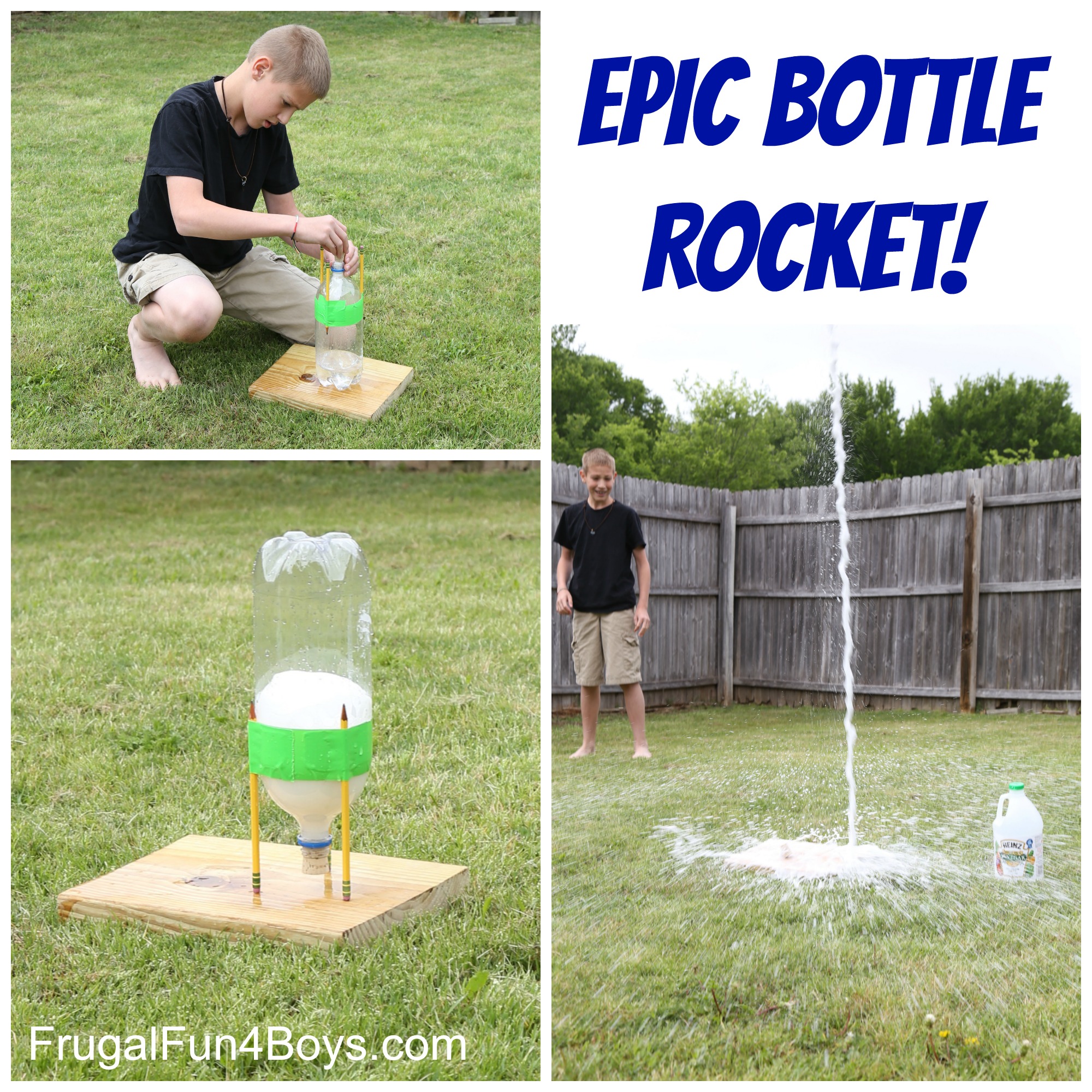