This year, Gresham is doing first grade math with Making Math Meaningful.  We have finally landed on MMM after sampling several math programs.  (If you’re interested, I wrote a comparison of first grade math programs.)  This is my first time to do MMM first grade since I did not do it with Aidan, and  I really like how this curriculum focuses on exploring concepts rather than on just memorizing facts.

Here is how we explored the concepts of volume and greater than, less than, and equal.

I gave Gresham a tray with various containers – jars, bowls, cups, etc.  I told him that he was going to compare the volumes of the containers by filling them with rice.

Gresham chose two containers to compare, but first, we needed a procedure for figuring out whether the two containers held the same amount of rice or not.  After Gresham thought about it awhile, I suggested that we could fill one container and then pour it into the other container to see how they compared.  He agreed that that was a good idea.

Pouring the rice was a little tricky.  I asked Gresham if he wanted to use a funnel, and that made it more fun! 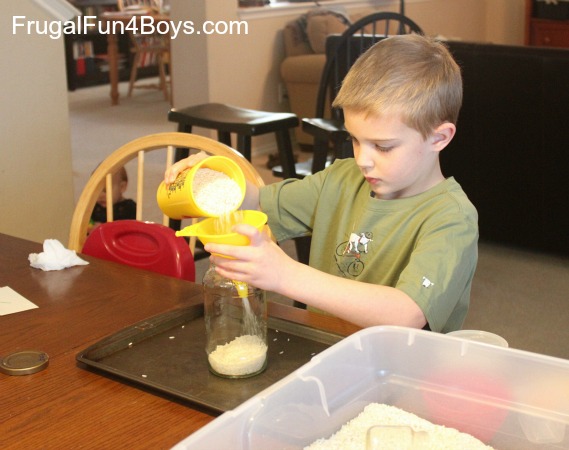 After comparing two containers, Gresham put an index card between them with either a greater than, less than, or equal symbol.  We were both surprised that these this jar and bowl were equal!

We repeated this procedure several times with different pairs of containers.  Owen also got in on the fun.  I had planned this activity for Gresham (age 6), but it would work well for ages 3-7.

For more math with greater than, less than, and equal, check out “How many Legos does it weigh?”  We had fun building a simple balance and weighing things with Legos!