Do you have a dinosaur fan at your house? Here are our favorite dinosaur toys and creation perspective dinosaur books. 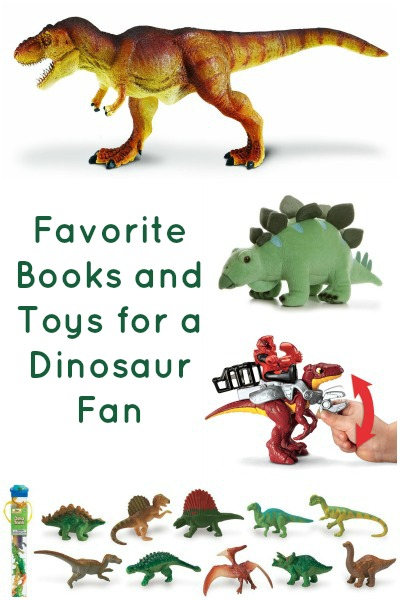 This post contains Amazon affiliate links which means that if you purchase through the links I will earn a small percentage of the sale at no additional cost to you.

We have broken a LOT of toys over the years (when I say “we,” I mean the boys of course, ha!), but our Fisher-Price Imaginext dinosaurs have held up really well through multiple children. I was looking at some of them on Amazon today and noticed that they are changing the look of the dinos. The new designs are not nearly as cool (in our opinion), and many of the dinos have been updated to have mouths that no longer open, which is a critical feature when you’re playing meat eaters vs. plant eaters! Some of the older styles of dinosaurs are on sale, so you might want to get them before the old styles are gone. 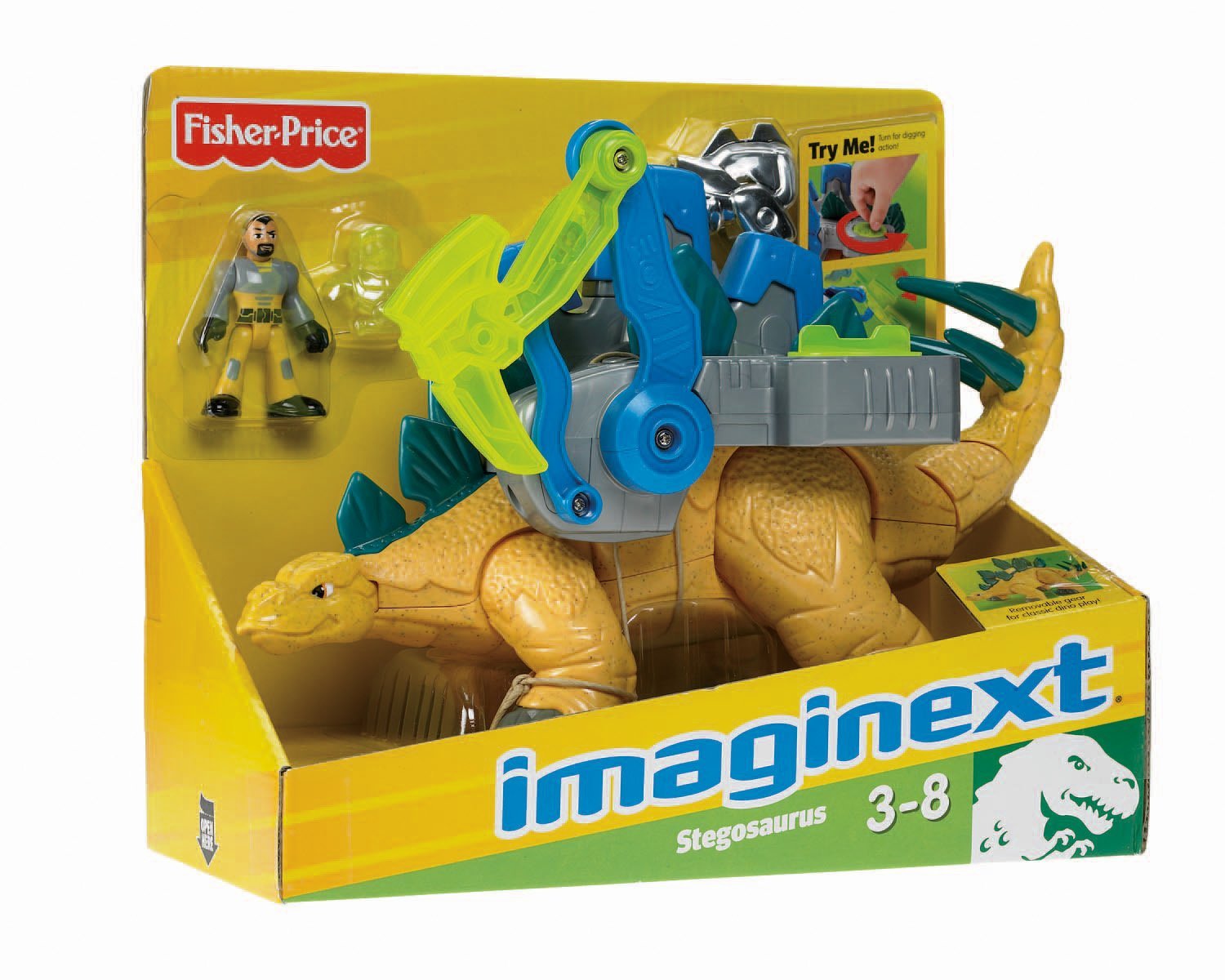 The Stegosaurus is one of our favorites. Gresham got this one for his 6th birthday and still plays with it 2 years later. It’s on sale for $17.99, original price was $23 according to the Fisher-Price site. 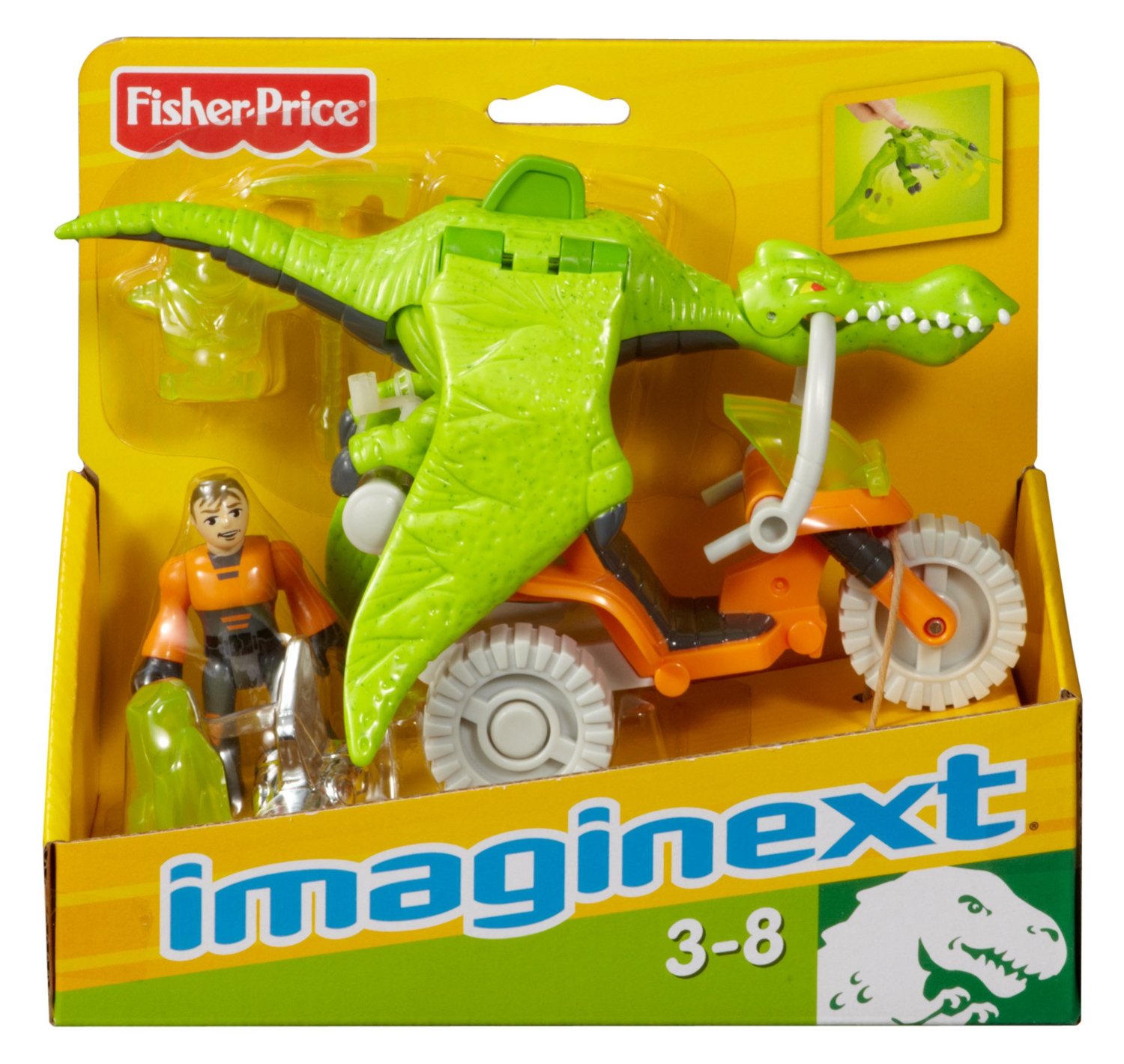 Gresham and Owen each have this Pterodactyl & ATV, and they are definitely favorites. The dino flaps its wings and its mouth opens. The vehicle is also lots of fun! 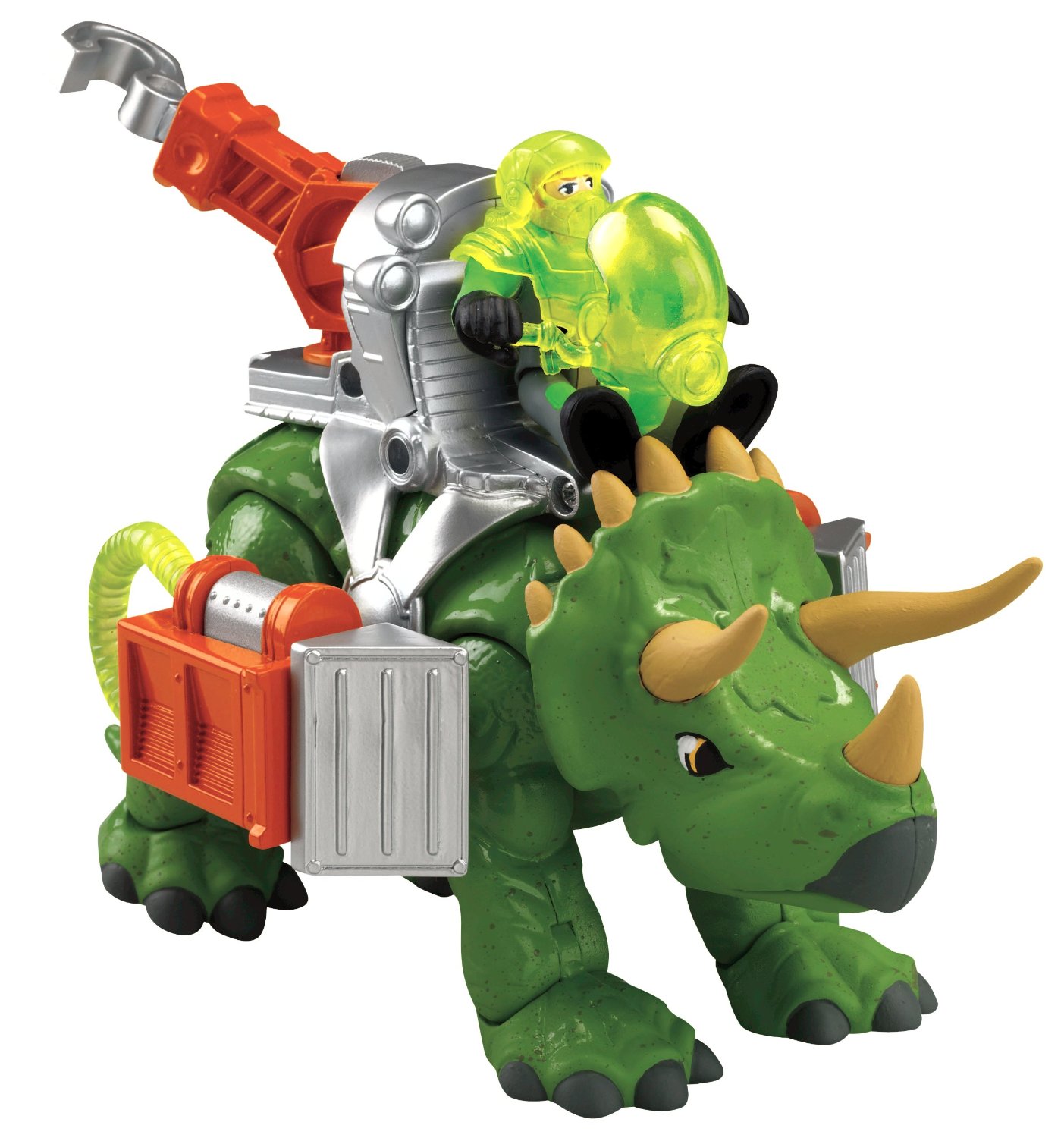 Gresham happily did extra chores to earn the money for this Triceratops! It’s a sturdy well made toy, and the new design is so, so, so ugly! 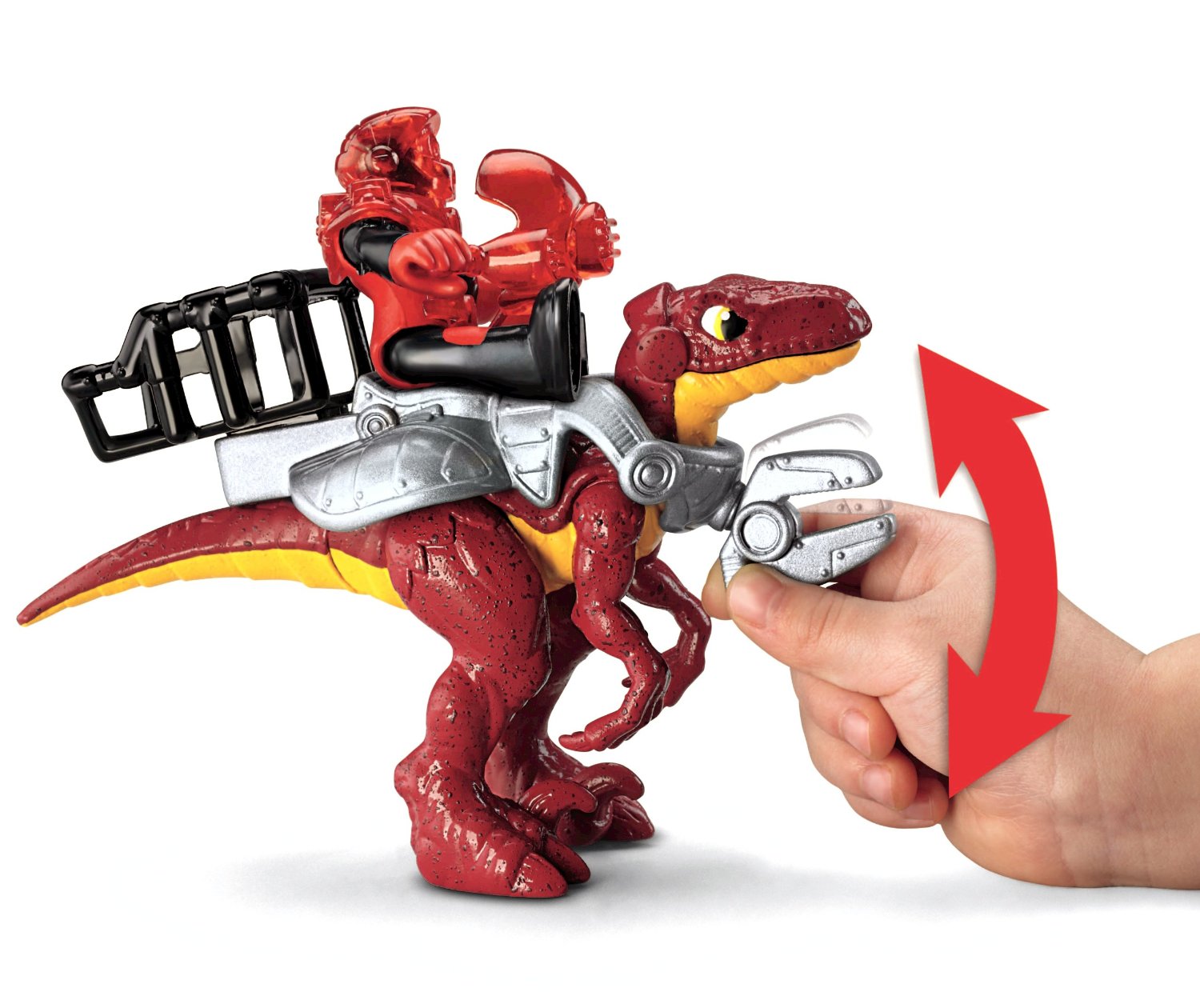 This little red raptor is the most beloved of all the dinosaurs. It’s just the right size for carrying around, and its mouth opens. Watch out for the price because I think it will be hard to find soon. I think we paid about $13. We even bought a second one to try to curb the fighting!

If you’re looking for large realistic dinosaurs, we love the Safari LTD dinosaurs such as this tyrannosaurus rex, and the Safari ones seem to be cheaper than the Schleich options.

There are tons of dinosaurs to choose from, and the prices on Amazon seem to reflect whether they are discontinued or not with hard-to-find dinos being overpriced. Gresham thinks this Dilophosaurus is awesome and wants to save for it. I had never heard of a Dilophosaurus, but that’s how it goes with many of the dinos out there!

We do LOVE our Safari Toob animals! Check out the Dinosaur Toob, the Carnivorous Dinosaurs Toob and the Dinosaur Babies Toob. Gresham spends hours with his Toob dinosaurs. They are perfect for pretend play – check out our garden in a tub and coconut volcano play with Toob animals.

We like to buy our Toobs at Hobby Lobby or Michaels with a coupon. 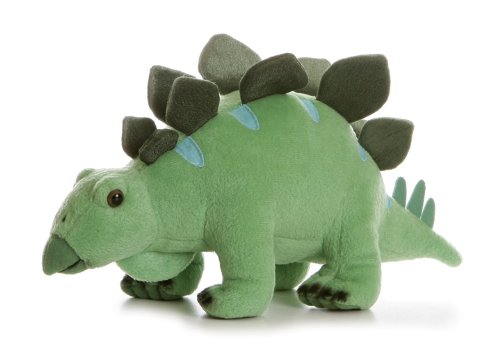 This stuffed stegosaurus has been going strong for about four years at our house!

There are several other adorable stuffed dinosaur styles – the Webkinz Apatosaurus is another of our favorites. 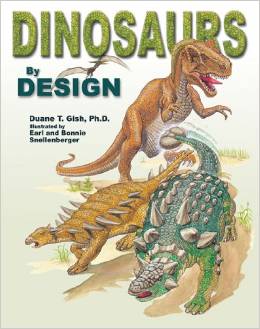 This is a great book for older kids (ages 8+). It’s my favorite of all of our dinosaur books. This book contains information on how fossils are formed, how fossils are excavated, how dinosaurs fit with the Biblical account, and information about specific dinosaurs. Ignore the negative reviews on Amazon – yes, this is a book that approaches dinosaurs from a Biblical worldview – that’s the point! The issue of creation and the age of the earth seems to bring out a lot of internet hostility… 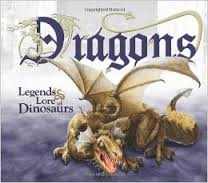 Dragons: Legends and Lore of Dinosaurs

This book provides a fascinating look at the issue of dragons. Almost every culture has legends of dragons. But where did these legends come from? If you believe the Bible and the fact that dinosaurs lived at the same time as man, it’s clear that people had experiences with dinosaurs and passed those stories down. Can we separate out fact from fiction where dragons are concerned? Not entirely. But it’s interesting to think about! This book has beautiful illustrations that my dragon fan adores. 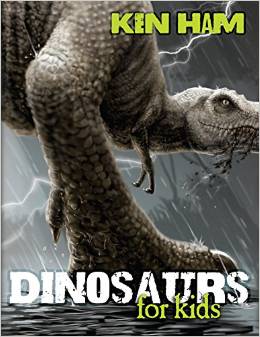 Dinosaurs for Kids by Ken Ham

Although I like Dinosaurs by Design better, Dinosaurs for Kids is also a great book. Great illustrations. 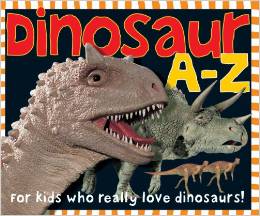 Dinosaurs A to Z

This is a great book for preschoolers! This is a secular dinosaur book, but it does not push evolution or millions of years. Gresham loved this book as a preschooler and spent hours looking at the pictures. 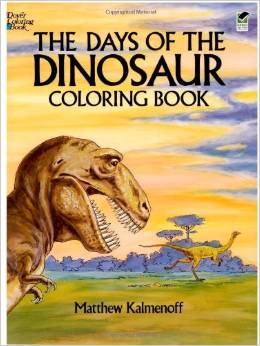 We love the Dover coloring books, and The Days of the Dinosaur has great pictures to color. This is a secular book, but I can’t remember if it has evolution references in it. If so, it didn’t matter to us because the boys don’t read the words. 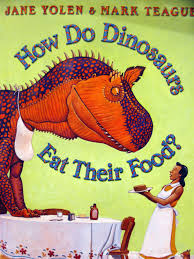 For preschoolers, we love the “How Do Dinosaurs…?” books by Jane Yolen and Mark Teague. There are many titles to choose from such as How Do Dinosaurs Eat Their Food? 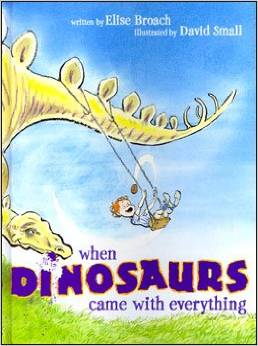 When Dinosaurs Came with Everything by Elise Broach

What if you went to the doctor and got a dinosaur instead of a sticker? This is such a fun and imaginative book.