Today marks the end of the first trimester in my fifth pregnancy (well, sixth if I count our loss in June). It has been a rough first trimester, and while I’ve not been as sick as many are, it certainly hasn’t been pleasant. I’m not quite over the sickness yet, but I’m definitely enjoying not feeling completely exhausted every moment of the day.

I truly thought that having another baby would be, “Oh, what’s one more?” and I am here to tell you that this has not been the case. It has been tough. And the baby is not even here yet! Honestly, I would have been completely fine with taking some time off of school (and so would my husband!) but life goes on at a pretty fast pace when you have four boys! They don’t do down time or excessive amounts of free time very well. So we’ve been continuing on with a modified amount of school. Then there’s the mess – laundry doesn’t slow down just because mom isn’t feeling well! (The boys do help quite a bit, in case you’re wondering.) 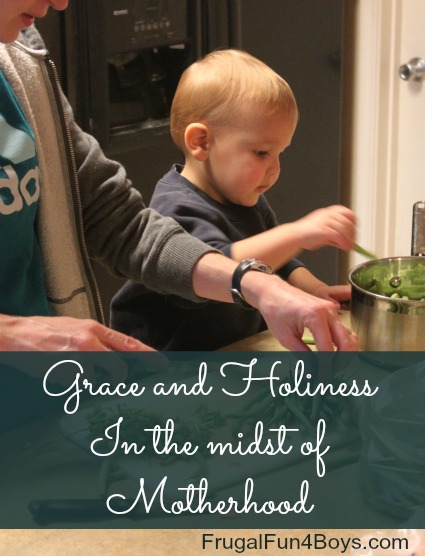 The title of this blog post is “Grace and Holiness in the Midst of Motherhood.” One of those words is very popular in our current Christian culture, and the other one is not. There has been a trend in Christian blogging lately to talk about “mom guilt” and how we should give ourselves grace rather than worry about being the perfect mom. I think that this is at least partially a response to Pinterest and the “ideals” that we are all confronted with online on a daily basis and partially coming out of a desire to be more gospel-centered, which is certainly a good thing.

But where does holiness fit in?

I’ve been contemplating this a lot lately. I can’t accomplish all that I would like to accomplish as a mom. What is the Biblical way to think about that?

I think that the key is to give myself grace in the areas in which God has not given commands, and to pursue His strength to make the things that He has commanded of greatest importance.

If you’re in a similar situation and have a reduced amount of health or energy right now, I want to encourage you to get in the Word and to talk to your husband and determine what your priorities will be. God will give you wisdom if you ask for it!

For my husband and I, we are choosing to NOT worry about:

What I AM worrying about:

I am worrying about holiness. Now, I’m not saying that I am perfectly living that out. Far from it. But as I recently read through the book of 1 Peter, I was struck by God’s high standard for our behavior and also His grace that He extends to us so that we have the ability to live it out.

Therefore, prepare your minds for action, keep sober in spirit, fix your hope completely on the grace to be brought to you at the revelation of Jesus Christ. As obedient children, do not be conformed to the former lusts which were yours in your ignorance, but like the Holy One who called you, be holy yourselves also in all your behavior; because it is written, “YOU SHALL BE HOLY, FOR I AM HOLY.”

But you are A CHOSEN RACE, A ROYAL PRIESTHOOD, A HOLY NATION, A PEOPLE FOR GOD’S OWN POSSESSION, so that you may proclaim the excellencies of Him who has called you out of darkness into His marvelous light; for you once were not a people, but now you are THE PEOPLE OF GOD; you had NOT RECEIVED MERCY, but now you have RECEIVED MERCY.”

(Words in all caps are quotations from the Old Testament.)

When I am not feeling well, it’s extremely easy to give into the temptation to ignore the kids, to speak harshly to the kids, and to zone out on Facebook rather than studying His word. But I honestly do not believe that God wants me to just put aside my “mom guilt” over yelling at them, at least not the way that this term is defined in today’s Christian culture. Guilt can be a good thing to expose sin! Should I confess the sin? Yes. Should I ask for the kids’ forgiveness? Yes. Will God be gracious to forget that sin? Absolutely! But I am concerned about the message in our culture that says that we are all a mess, no one is perfect, and God’s okay with it. The price that was paid on our behalf on the cross is too great for us to move forward just being okay with our sin!

Will motherhood look different during times of sickness or other upheaval? Yes, of course it will. But God will give us the ability to continue to honor Him.

His strength instead of mine…

Last night, Jonathan came into the kitchen while I was putting dinner together. He was whining for me to hold him, and I was feeling sick and was just about to send him away… But I stopped. I asked him if he wanted to see what I was cooking. He did! He looked in each pan, and then I set up a step stool so that he could “help” by putting the green beans in the pot after I cut them. It was an amazing opportunity to see that as I made the choice to be kind to him despite how I felt, God gave me the ability to love him in that moment. 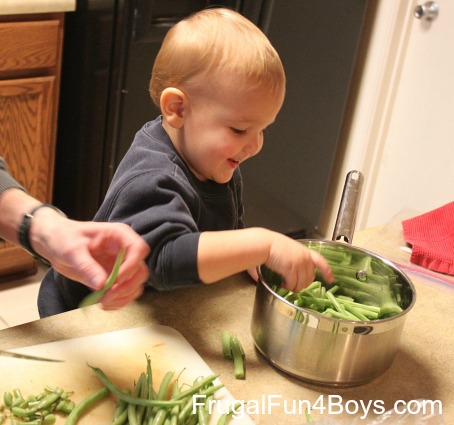 Yes, there have been other moments when I’ve had to tell the boys that I am just sick to do what they are wanting to do, but I’ll honestly admit that there have been plenty of times when I could have chosen to serve and just didn’t! And that’s what this post is about. Choosing to allow God to work in the difficulty of my circumstances to sanctify me and make me more like Himself rather than assuring myself that my sin is normal and fine and nothing to worry about.

For more on this topic, I highly recommend reading this post on Mommy Guilt from Making Home (one of my favorite blogs for Christian moms). Also, this post is a beautiful testimony of God’s sanctifying work on a mother’s heart during her child’s ongoing battle with cancer. This post is long, but a must-read!