Here is an interesting project for kids that explores both electricity and magnetism – build a simple electromagnetic train!

This intriguing video has been making it’s way around Facebook… it’s a simple electric “train” made out of coiled copper wire and a train car comprised of a battery with magnets on both ends. It was so fascinating that we had to try it!

This project totally works as seen on the video, but there are some things to know first.

Want to see how it works?

To build this train, you will need: 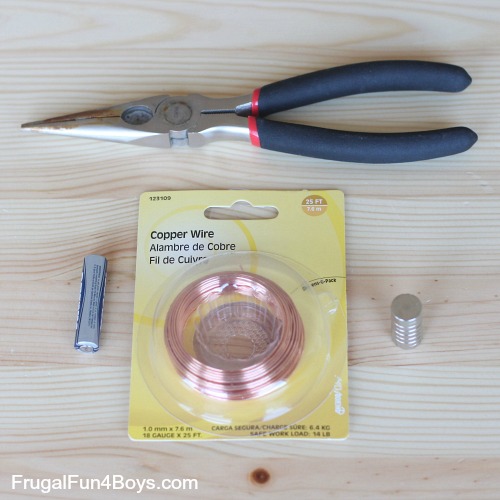 Safety Note: Neodymium magnets are extremely strong and definitely not for kids who put things in their mouths. In fact, this entire project is not for kids who still put things in their mouths! I store our magnets out of reach of my kids – even the bigger kids. They can be difficult to separate because of their strength and can definitely damage electronic devices. With proper supervision, though, this project is super cool and there is so much to learn! Just be safe. 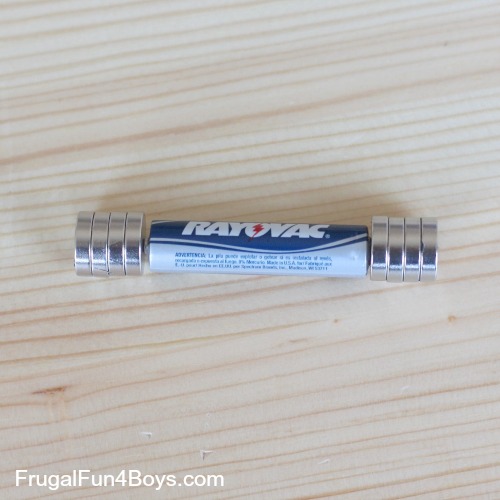 We put 4 magnets on each end of the train. One or two will work fine, but we had plenty so we used four. The original video does not mention this, but the magnets need to be placed on the battery with the poles facing opposite directions. Otherwise, the train will not work. (Just hold the magnets so that they push each other away, then stick the battery in between.)

The coils need to be wrapped pretty closely around the train. I found that wrapping the copper wire around a AA battery made nice even coils that were just the right size for the AAA battery plus the magnets. Once you cut the wire it’s kind of challenging to attach another section, so make a big long train track! I wish I had made ours longer, but I didn’t want to use up the entire 25 foot package if we were doing it wrong, so I cut it off to test it. 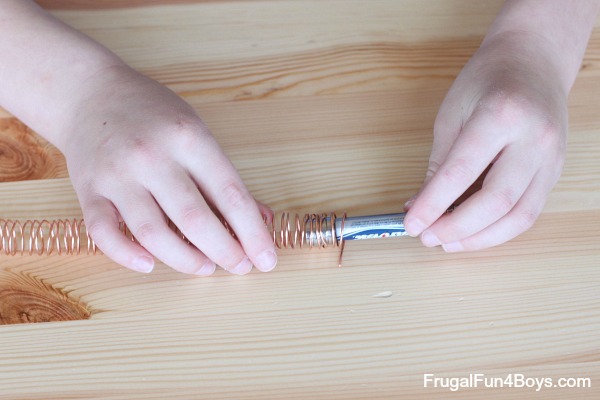 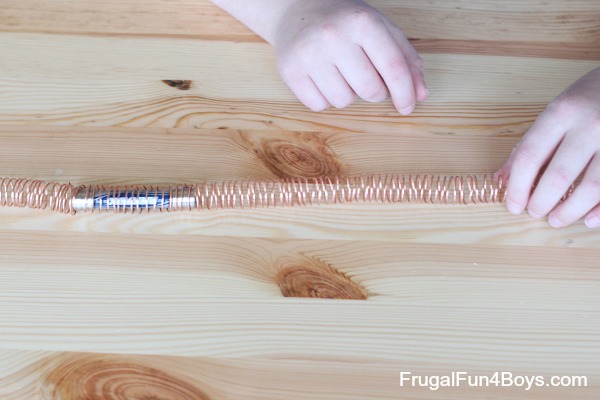 How the Electro-Magnetic Train Works:

Electricity and magnetism are linked in a way that scientists do not completely understand. Each can create the other. If you wrap a copper wire into coils and run an electrical current through it, you will create a magnetic field. If you rotate a permanent magnet (as opposed to an item that has been magnetized) inside a coil of copper wire, you can create an electrical current.

In this project, the neodymium magnets on the ends of the battery create a bar magnet with a north pole and a south pole. When you put the train inside the coils, it causes an electrical current to flow through the copper wire, which creates a magnetic field in the section of wire coils right around the train car. This magnetic field has its own north and south poles, which push the train along the track. You’ll notice that the train will only run one direction because of it’s magnetic poles. It’s pretty amazing science!

We found that the battery runs down pretty quickly, and I’m not sure why this is. This train works really well for a demonstration, but you’ll probably need a fresh battery each time you get it out.

You can find a much more in-depth explanation of the science behind this project at Skulls in the Stars. He also has some very helpful diagrams in this article. Older students could benefit from drawing their own copy of the diagrams.

Be sure to visit the other posts in the STEAM Power series! So many fun ideas this week.

Simple Electric Circuit from What Do We Do All Day?

Rubber Band Car from All for the Boys

Learn and Play with Springs from Left Brain Craft Brain