Did you know that it’s possible to make slime that is magnetic? Magnetic slime has iron in it and is attracted to a strong magnet. It is super stretchy and so much fun. When you hold a magnet near the slime, it oozes toward it, and the slime will “swallow” up a magnet if you let it go! SO COOL.

Magnetic slime is easy to make with our 3 ingredient recipe!

This post was originally written in March 2014 and updated in April 2019. Our updated recipe is easier to follow and is much less messy! Slime has a bad reputation for being messy, and you may be afraid of a “slime fail.” I can assure you, however, that this project will be fun and successful! I do recommend reading the instructions carefully, and you’ll want to try out this project first before doing it with a group.

We love making slime – you’ll also want to check out our recipes for lemonade slime (scented!) and sparkly gold slime. Floam slime is another of my favorites.

What can magnetic slime do?

Magnetic slime is really fun to play with on its own. It stretches and squishes. If you hold it up, it oozes down to the floor in a long strand! Adding the element of magnet play makes it even more awesome. This is a great project to put on your to-do list for a rainy day, spring break, or summer! It would also make a great group activity for a science club or scouting group. 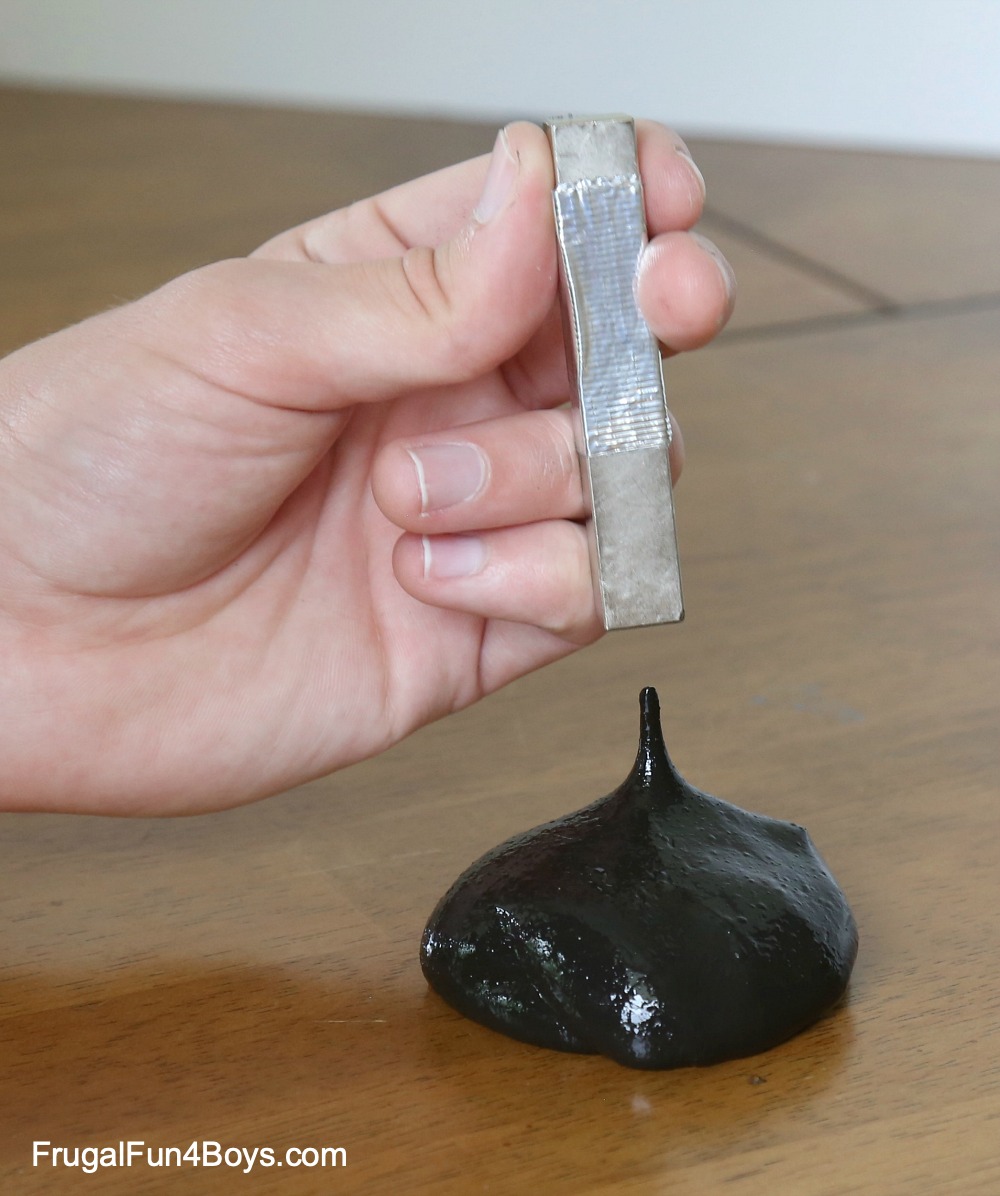 There’s just something about watching a liquid move without touching it… So fascinating!

You can get the slime to move faster if you let the magnet touch it. It’s also cool to feel the magnet stick to the slime. 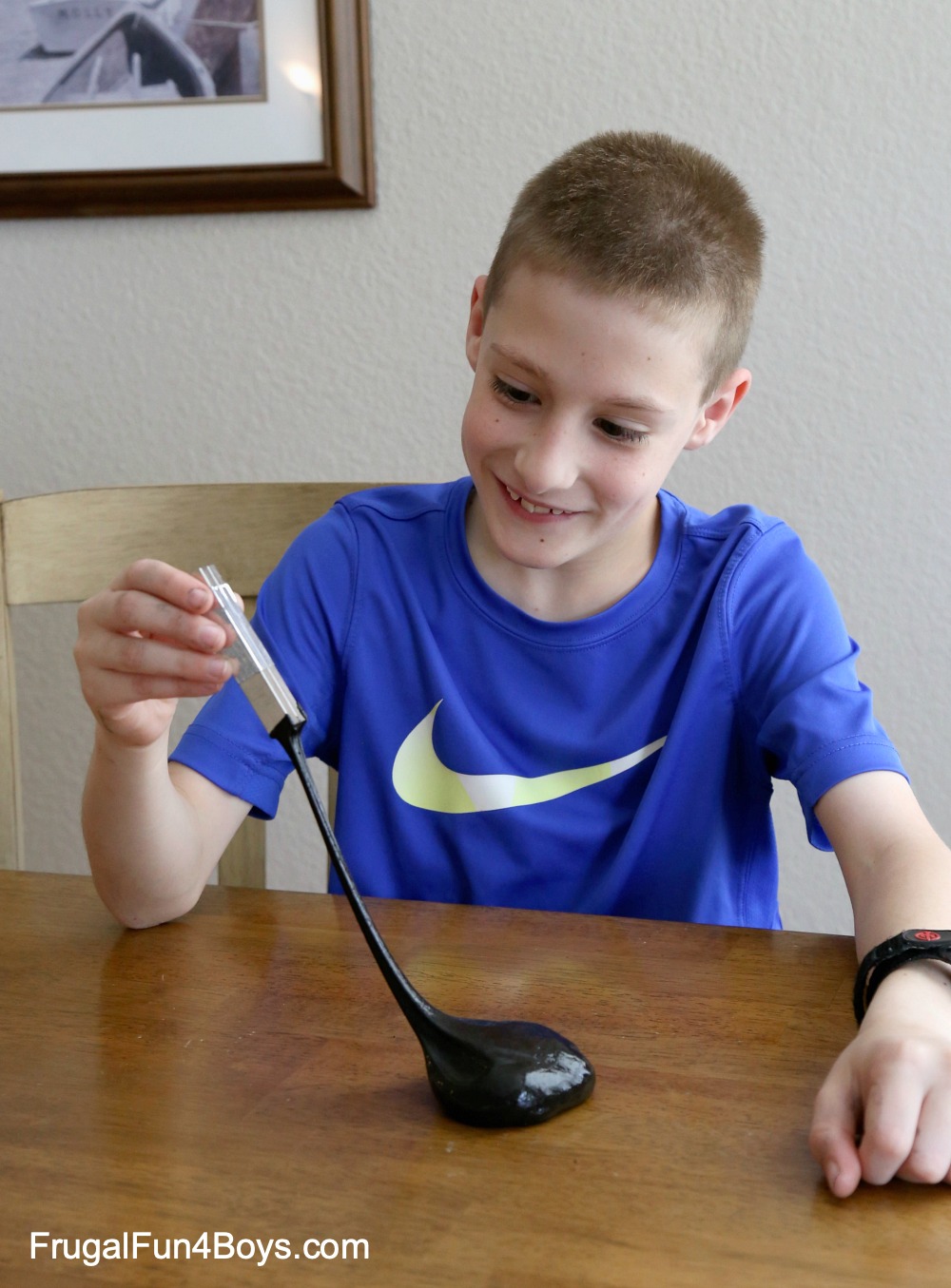 We also had fun putting the magnet on top of the slime and watching the slime swallow it up!

These links are Amazon affiliate links, meaning that if you purchase through the links, I will earn a small percentage of the sale at no extra cost to you. 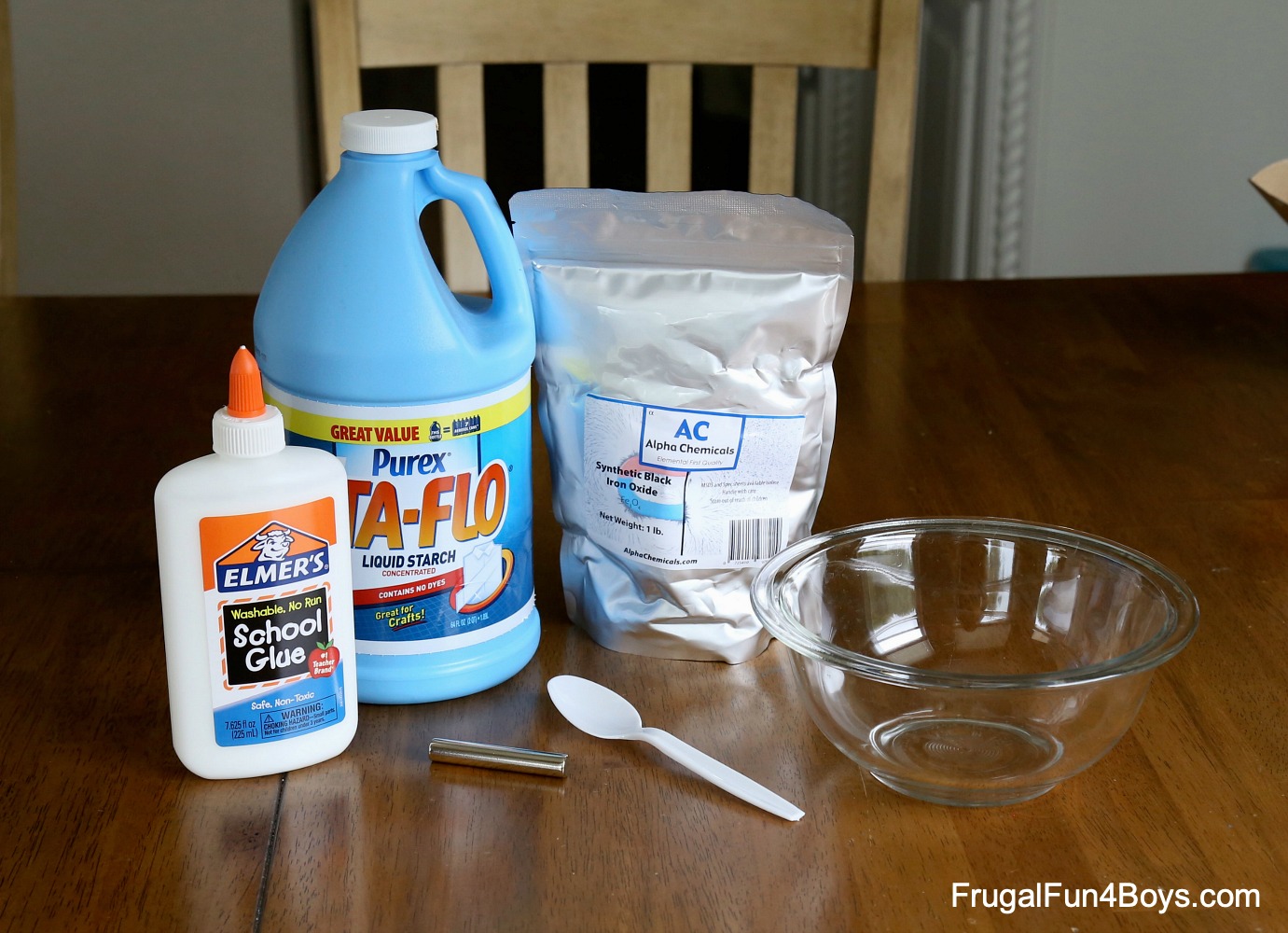 How to Make Magnetic Slime:

Step 1: Pour 1/4 cup of white PVA glue into your mixing bowl. You may have to use the spoon to scrape all the glue out of the measuring cup. 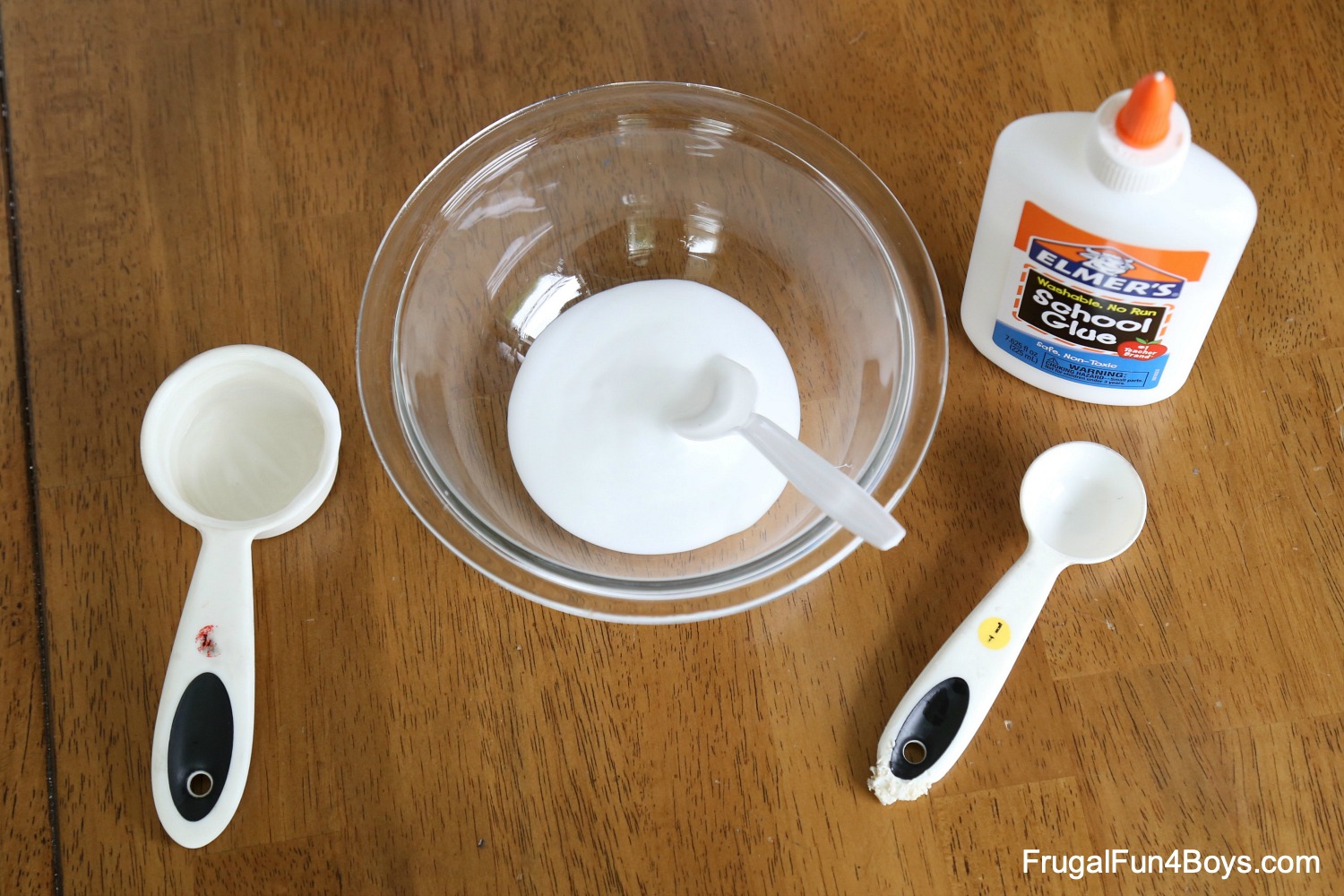 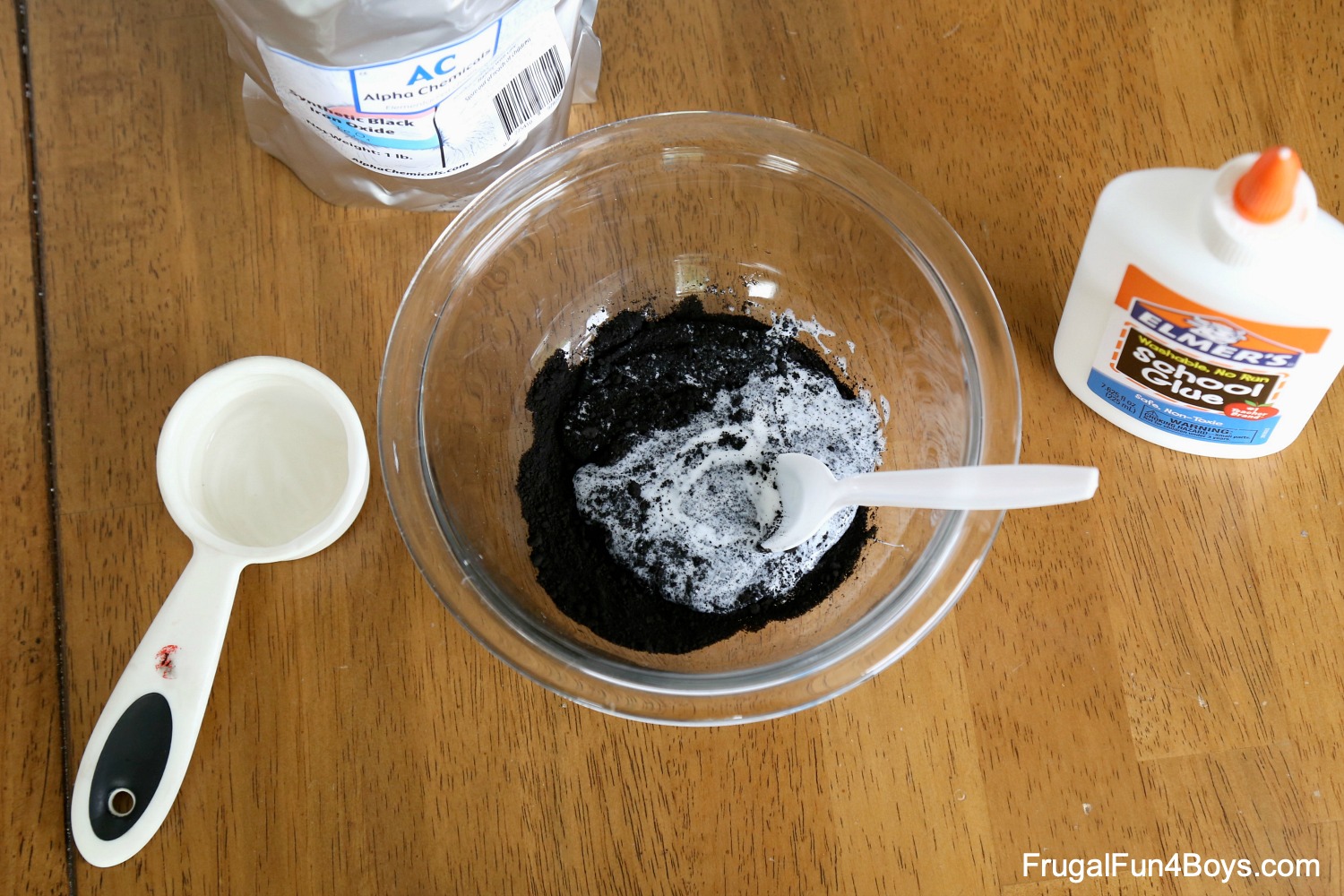 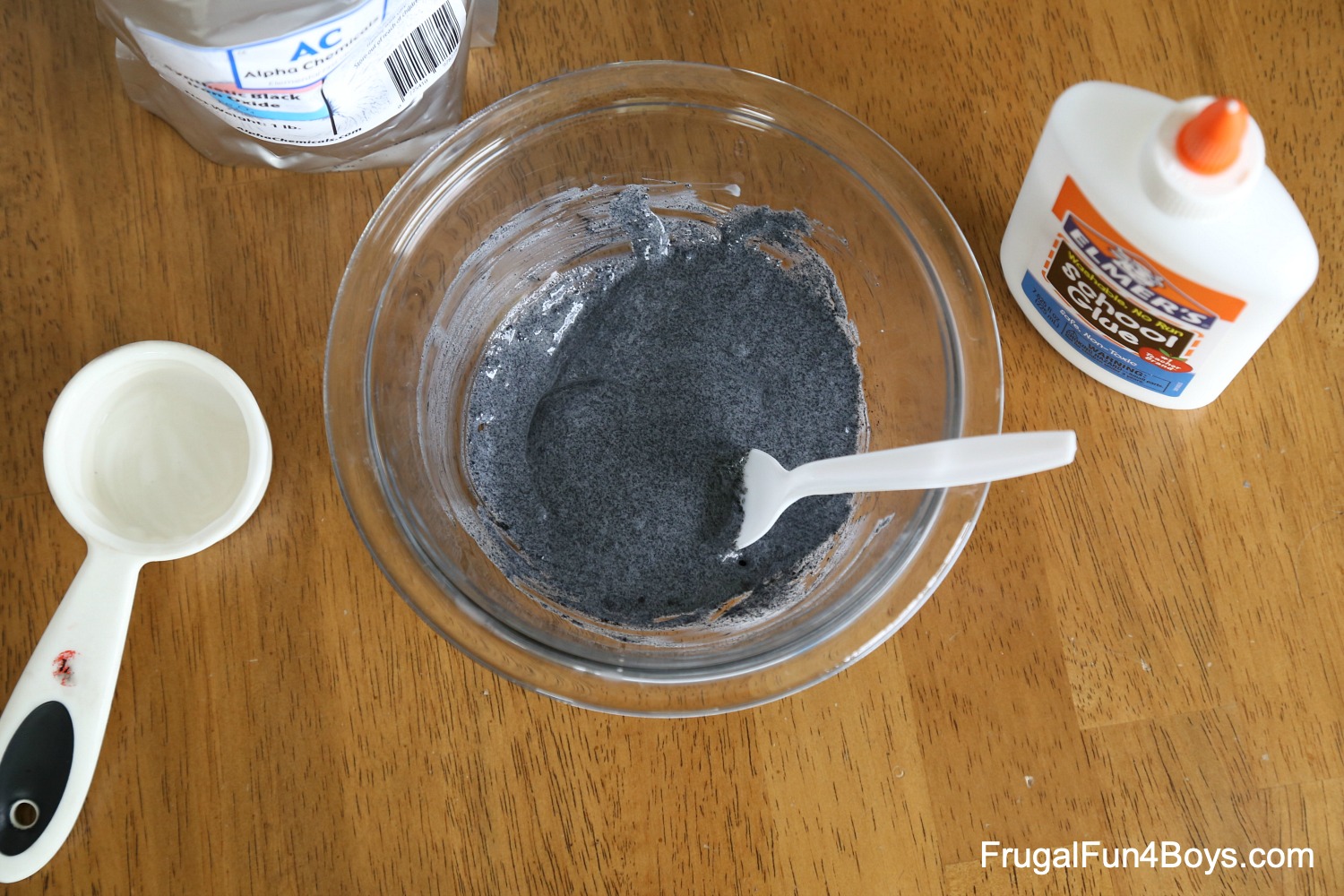 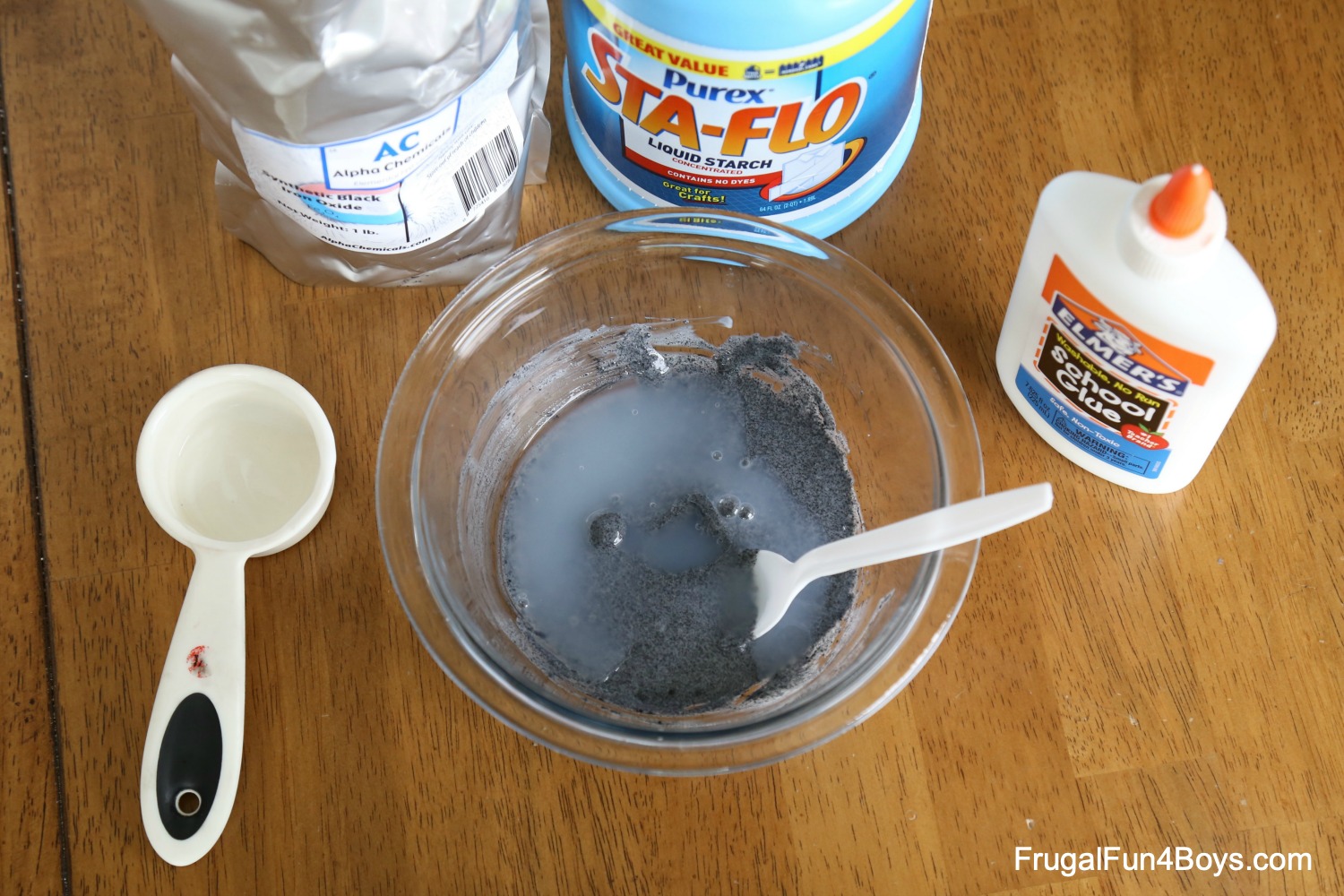 Step 4: Stir the glue and starch mixture really well to make sure that it’s all mixed. As soon as you begin to stir, the starch will react with the glue and the slime will start to form. 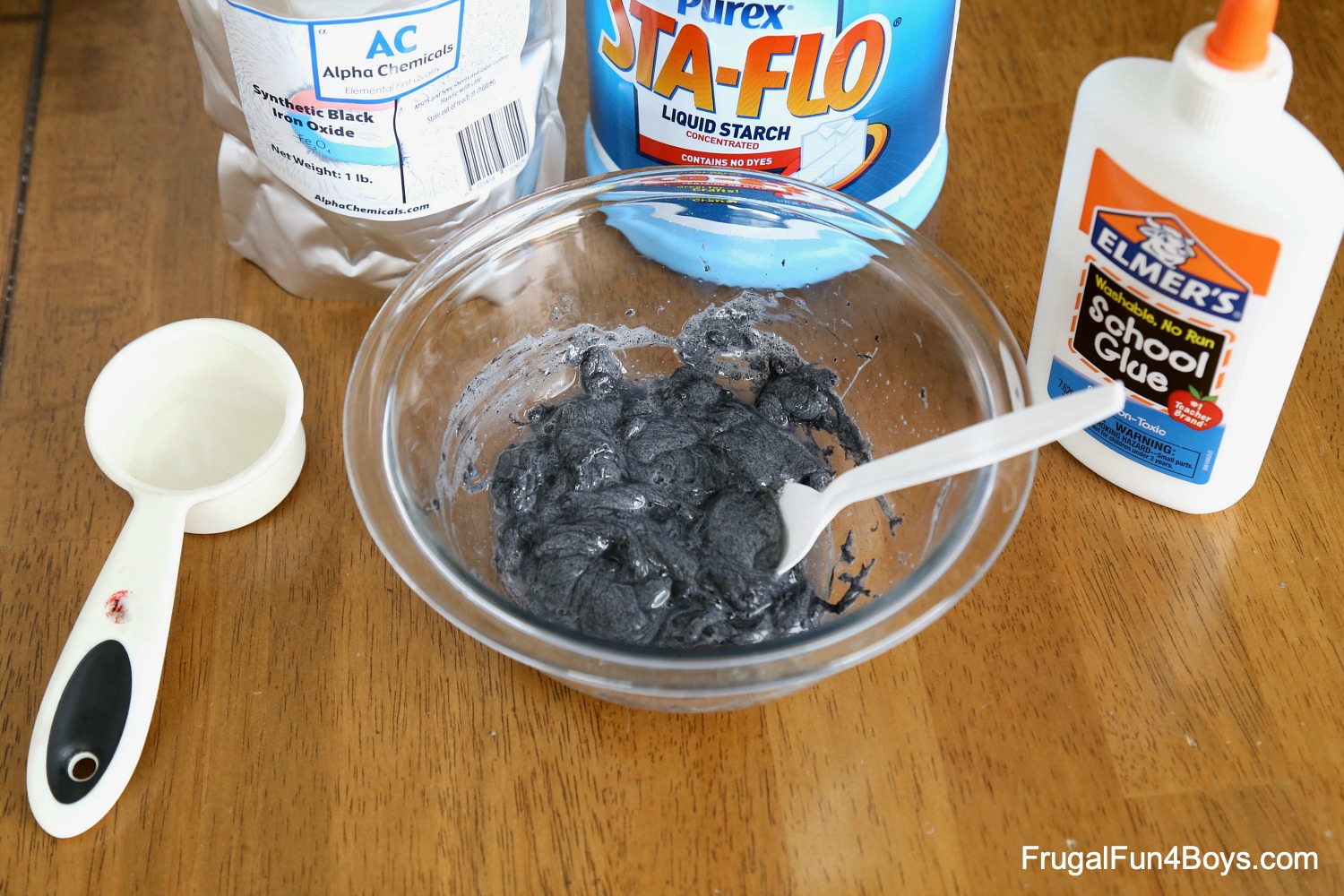 I ended up with a little bit too much starch. The way I could tell is that there was some unmixed starch in the bowl and on the slime after I had stirred it well. To fix this, I rinsed the slime for just a few seconds under cold water.

Step 5: Knead the slime with your hands.

This is how the slime looked after a quick rinse and a little bit of kneading. I find that it helps to wash my hands after kneading the slime and before playing with it. This helps to make the slime less sticky. 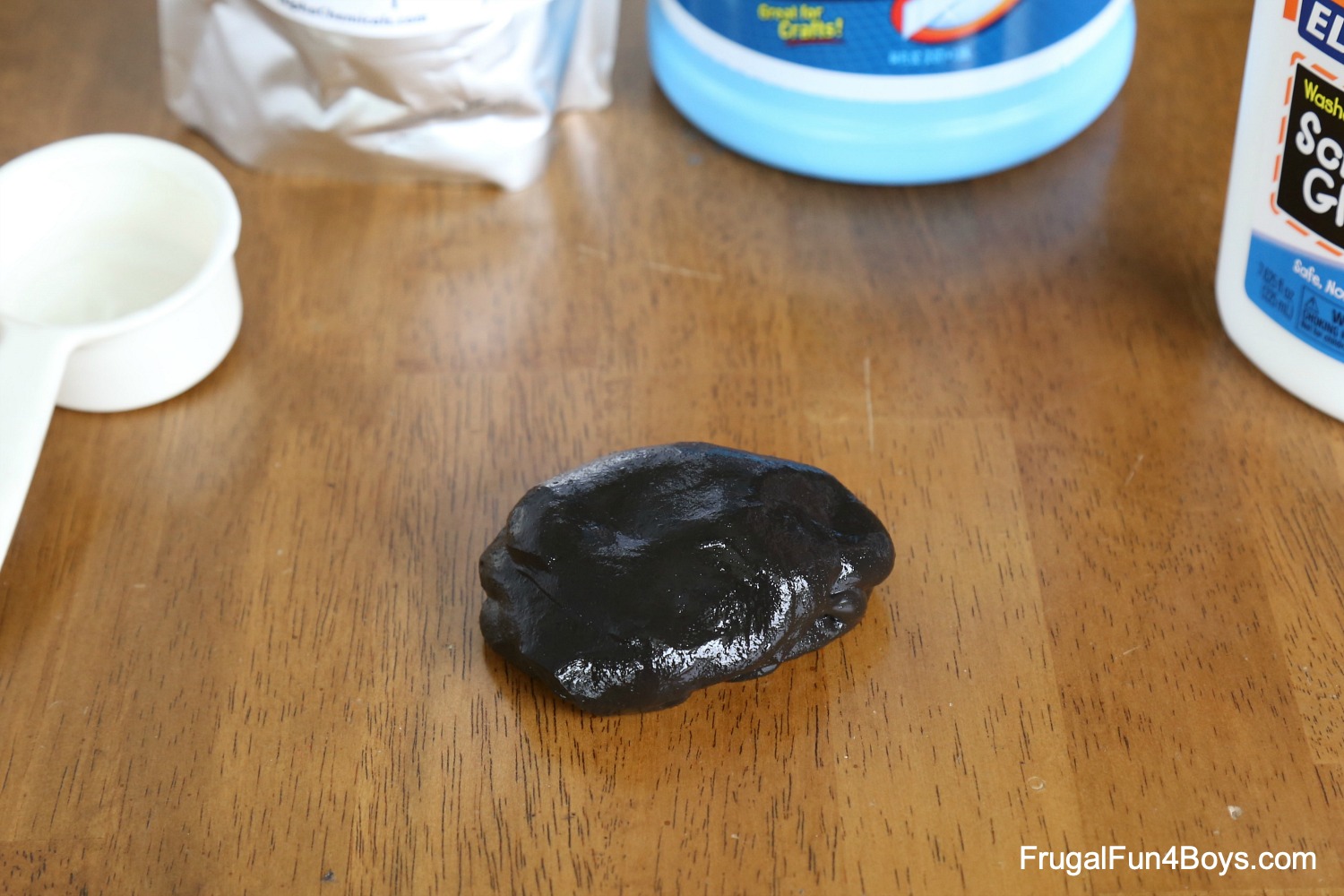 If making magnetic slime seems like too much of a hassle, you can actually purchase magnetic silly putty – Crazy Aaron’s Thinking Putty which comes with a magnet and does the same thing. (Although judging by the reviews, I think the homemade slime responds better to the magnet!) 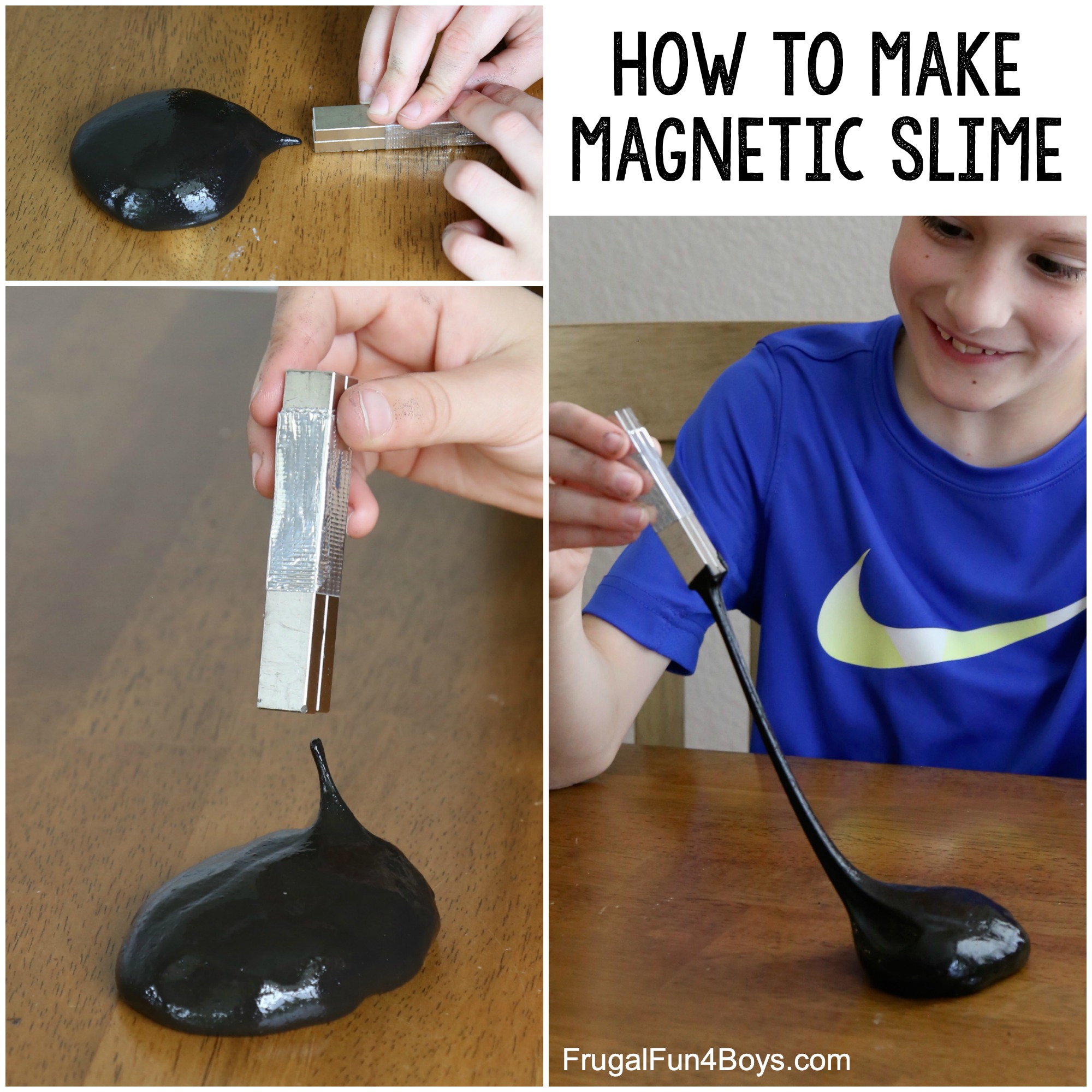