Decorate Easter eggs with the faces of your favorite Star Wars characters. It’s hard to decide which one is my favorite!

This was a mom project, not a kid project, but honestly it was a nice relaxing break for me. I figured that if I was going to go to this much trouble, I would use wooden eggs and keep them from year to year. 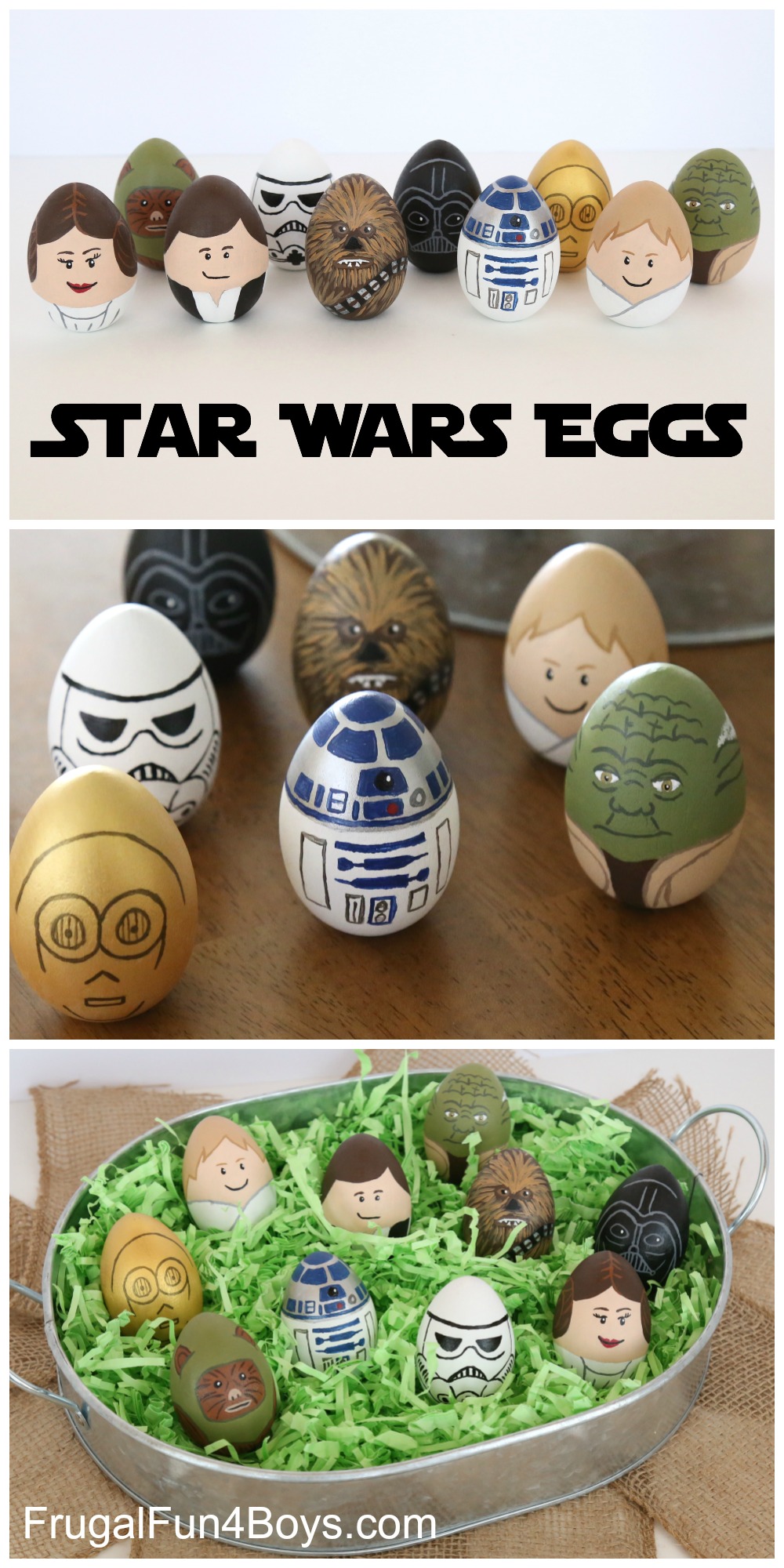 You can find wooden eggs at most craft stores, or you can order them from Amazon. (affiliate link)

Update: This post has been updated to include Princess Leia and an Ewok. Still haven’t had time to make Boba Fett or an X-Wing pilot, but those may have to wait for next year! And then there’s still Obi Wan, the Emperor, Darth Maul, Anakin, Jobba the Hut, all the new characters from The Force Awakens, and many more that I’m forgetting. (I should never have bought the boys those character encyclopedias for Christmas!) 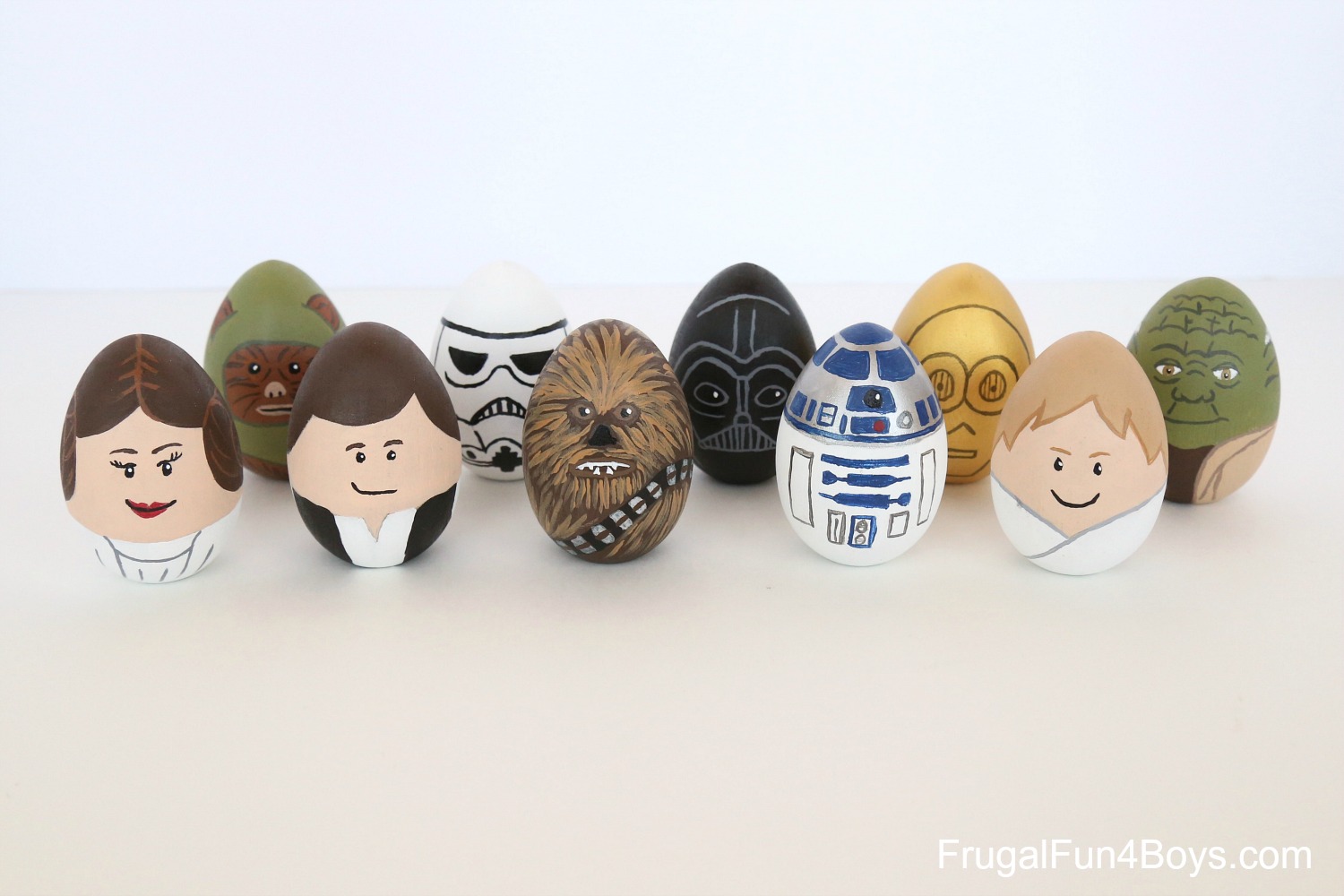 I found this metal tray at Hobby Lobby, and it’s perfect for displaying the eggs. 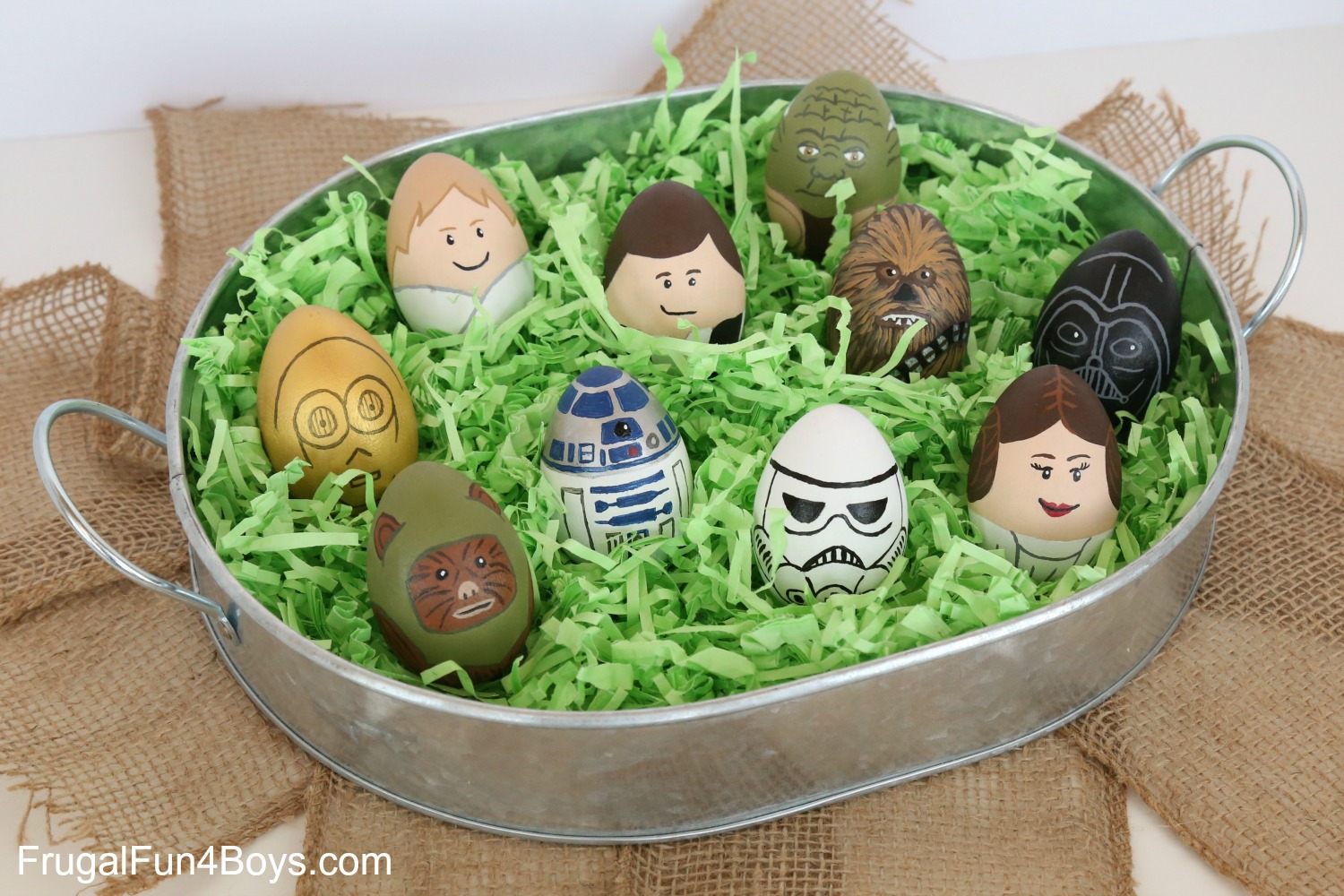 And of course, the boys also want to play with them! 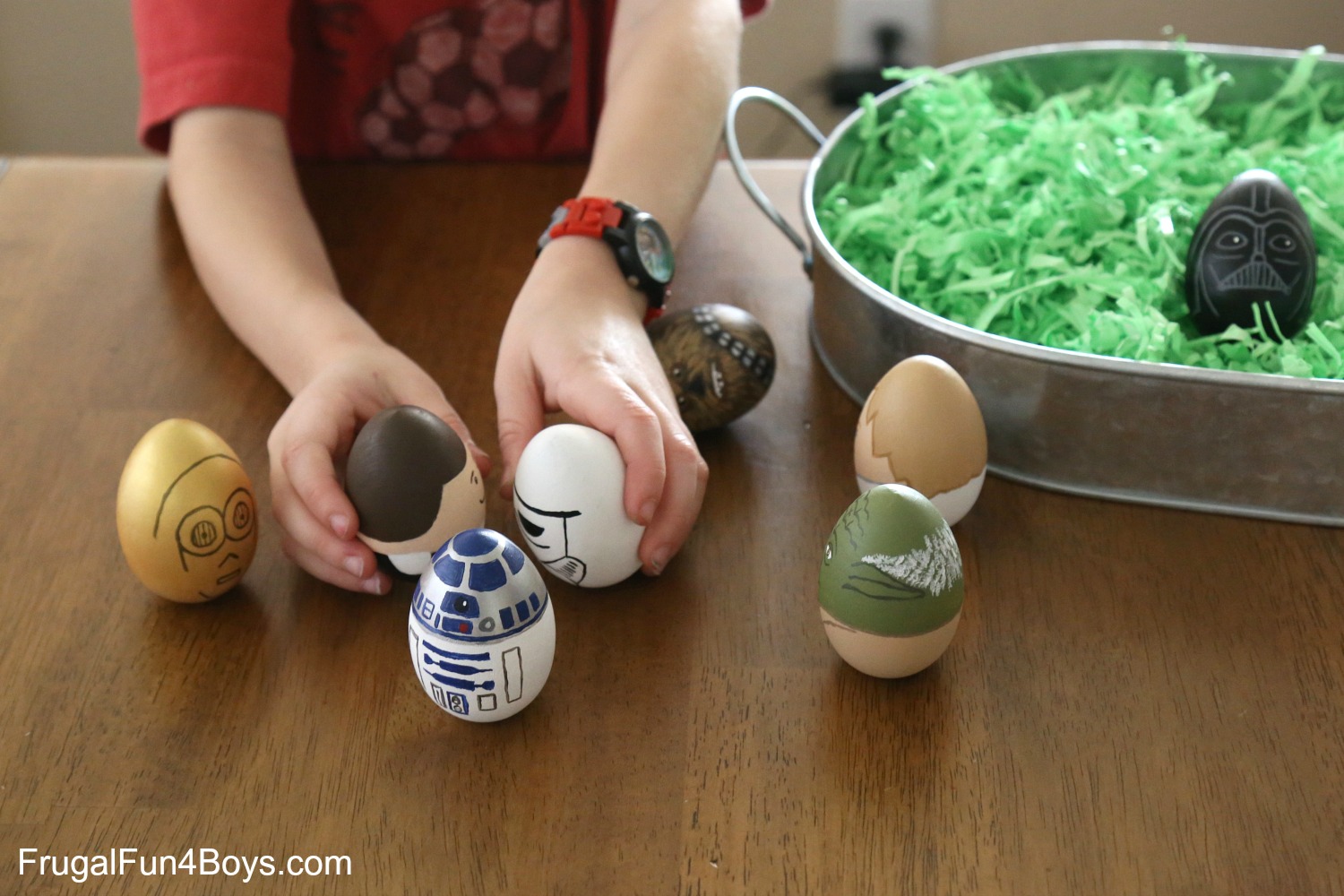 I am going to spray them with some clear coat shellac to make them a little more durable for dueling. 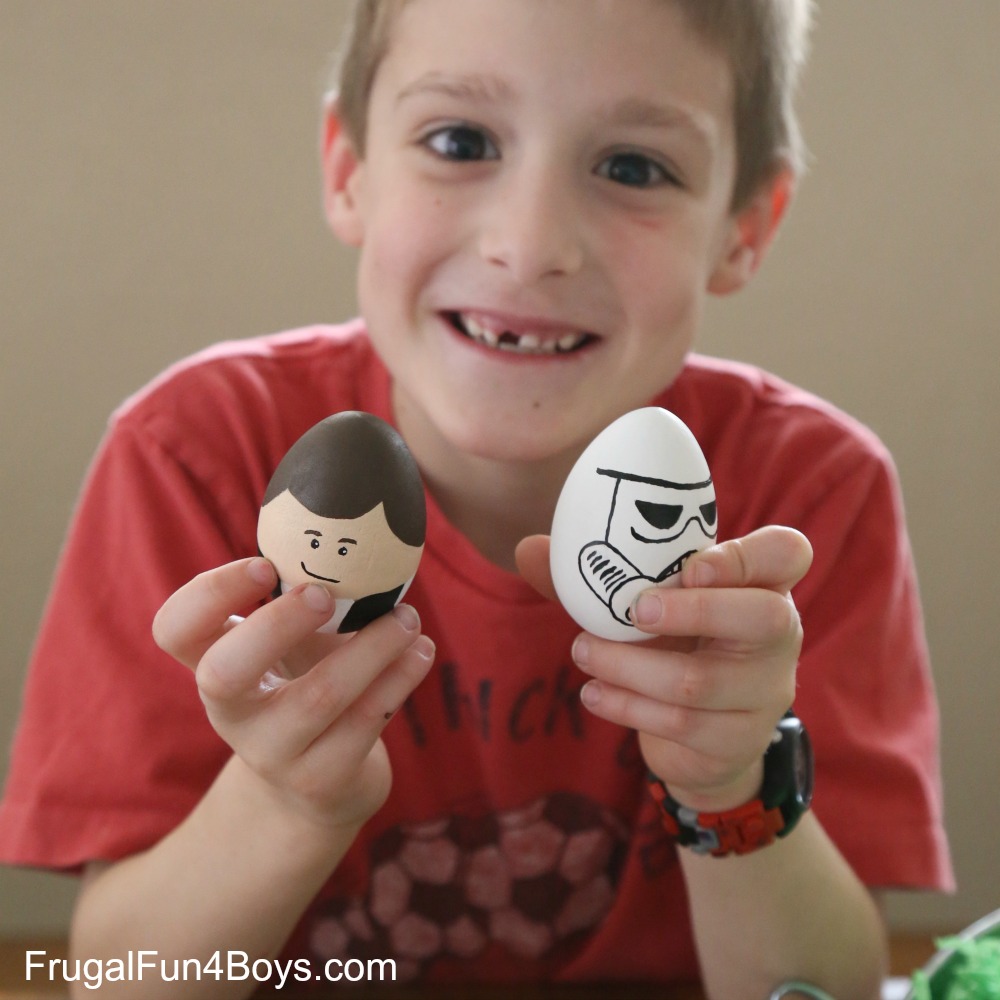 The key to success for this project (well, besides a steady hand a some patience) is the right paintbrushes. I bought a high quality round detailing brush and a couple of small flat brushes. Cheap brushes are hard to control. The detailing brush was $6 at Hobby Lobby and the others were a similar price. They were SO worth it.

I wanted to take more photos along the way, but it was hard to handle the camera with paint on my hands! I’ll go through each character and explain what I did. 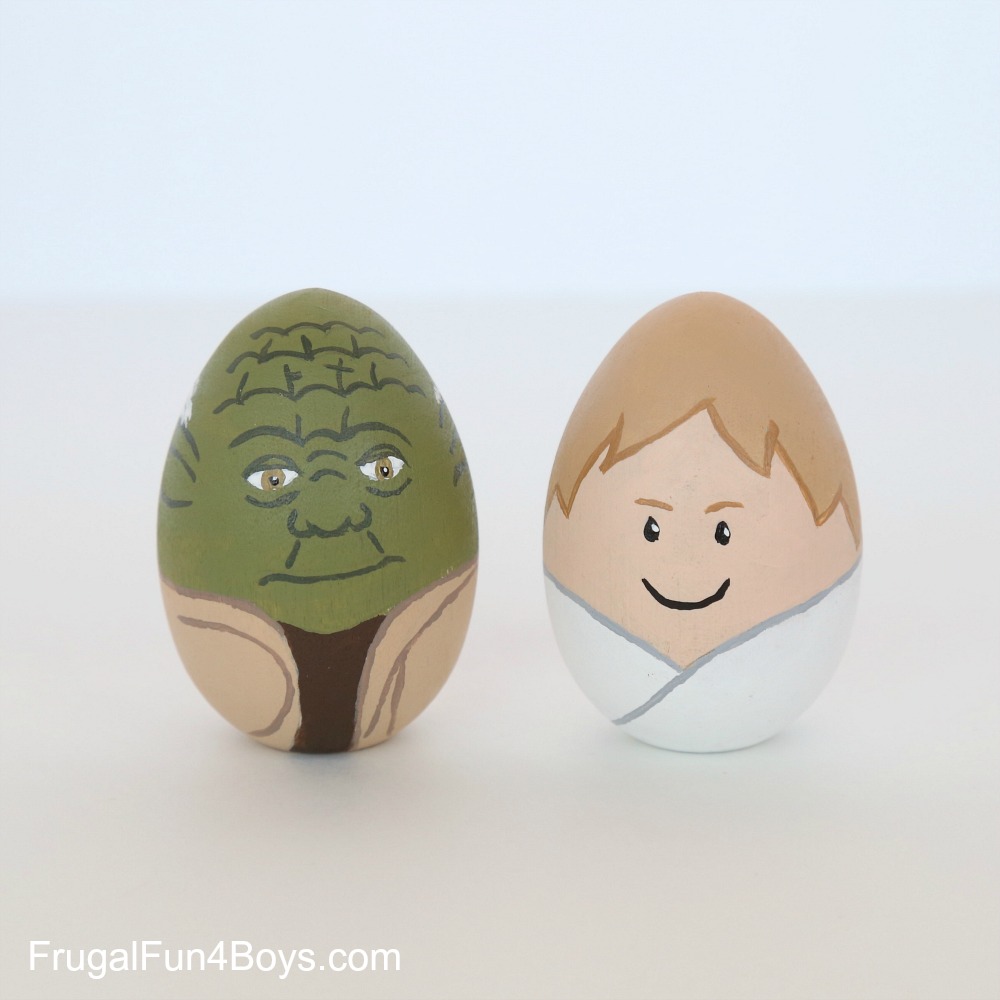 For Luke, I sketched out the design with pencil first. 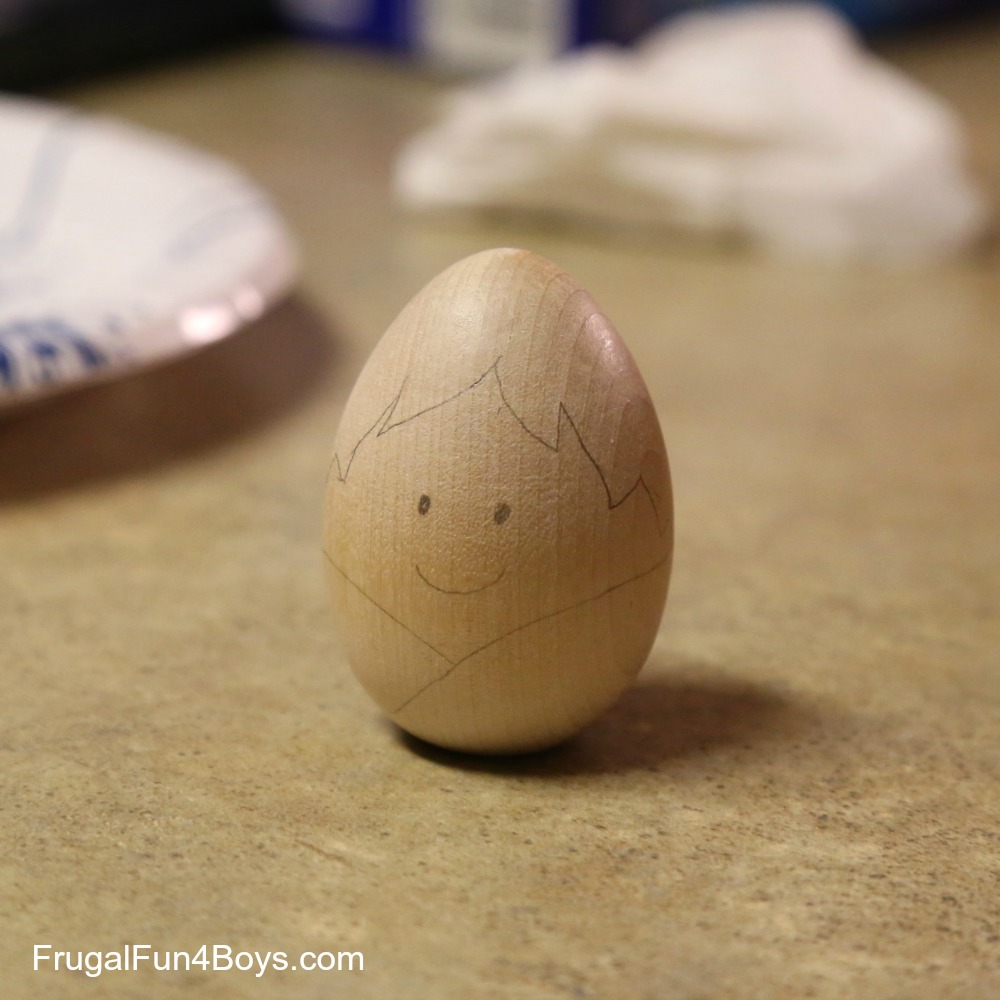 Then I painted the flesh color on the face. I could still see the pencil face underneath, which was very helpful.

Then I painted the body color, and added a gray outline to the robe.

For the hair, the eyebrows and the outline of the hair are the color that came out of the bottle. I added white to lighten it for the hair. 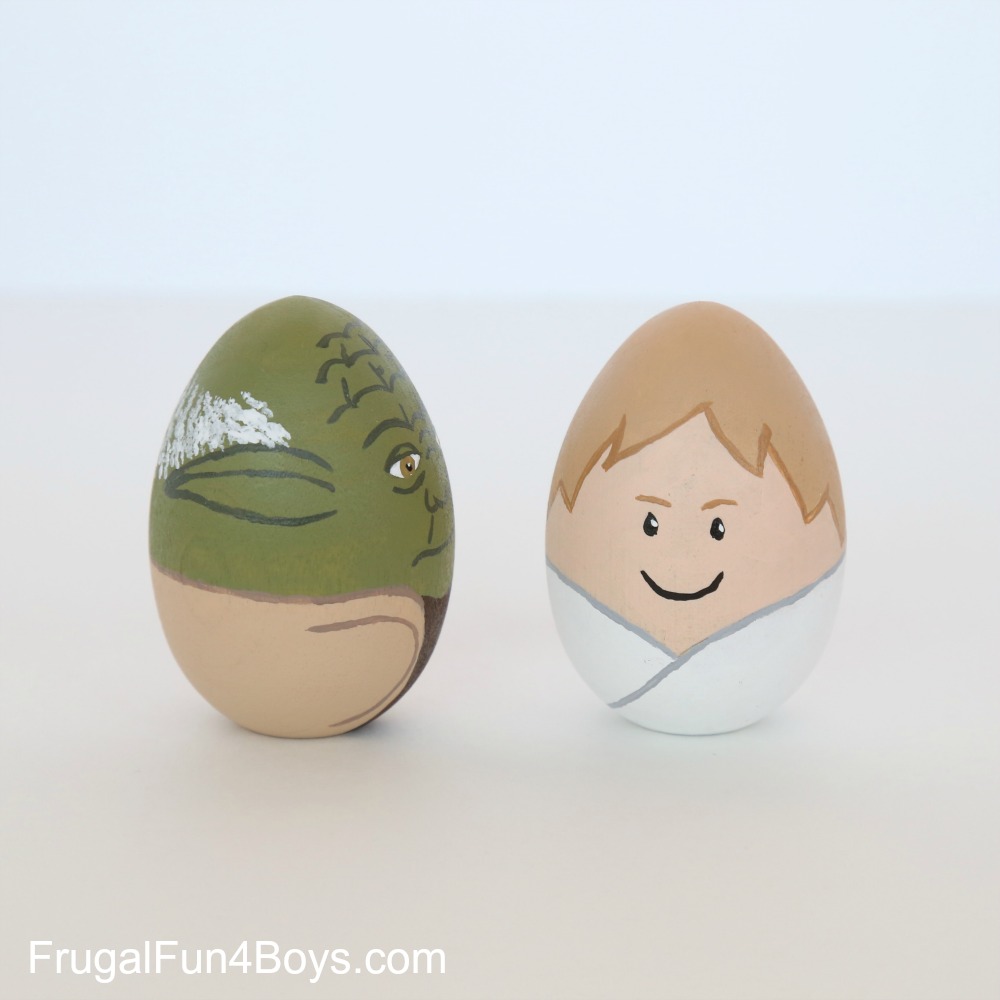 Yoda was a little more tricky! I sketched out the face completely, even though I knew I wouldn’t be able to see it after I painted on the green. After painting the green layer, I actually could see a few pencil lines which did help me to get the face right. I added a little black to the face color to create an outlining color. (When darkening a color, it does not take much black to make it darker!) 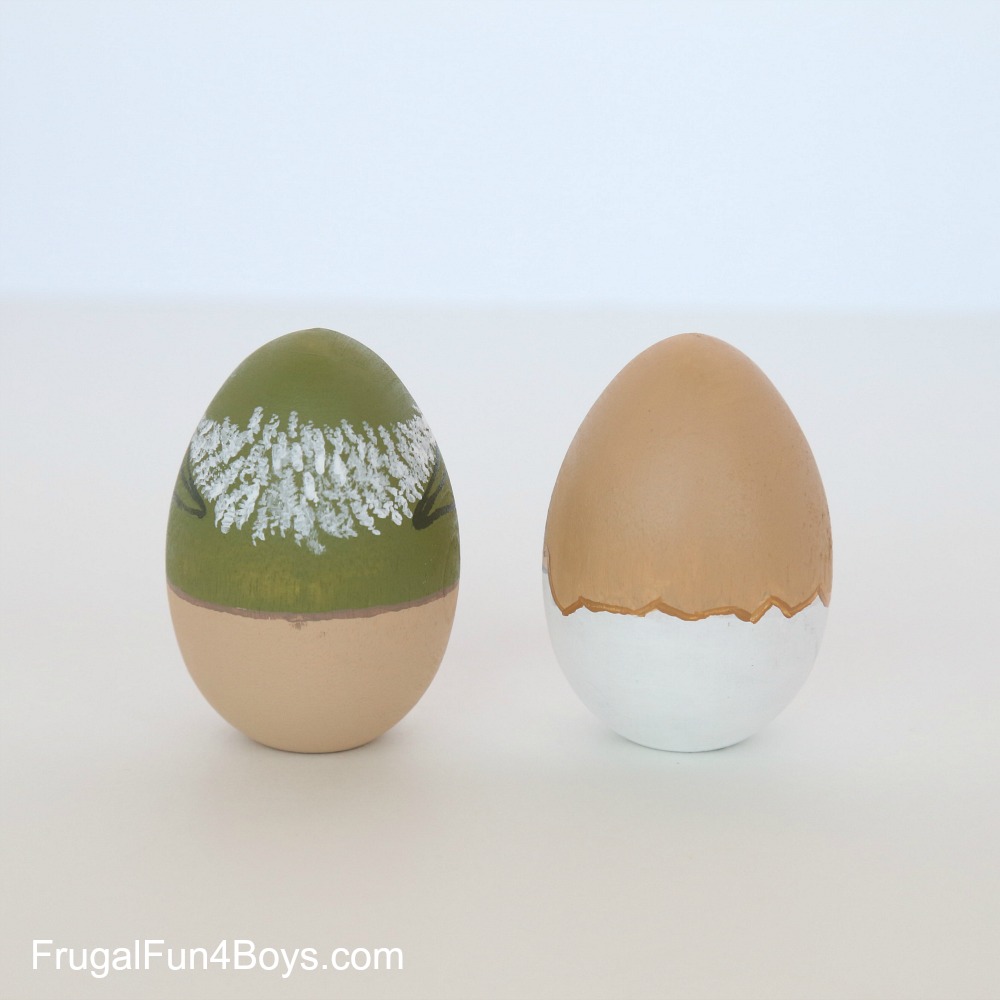 I added a little bit of white hair to the back of Yoda’s head. 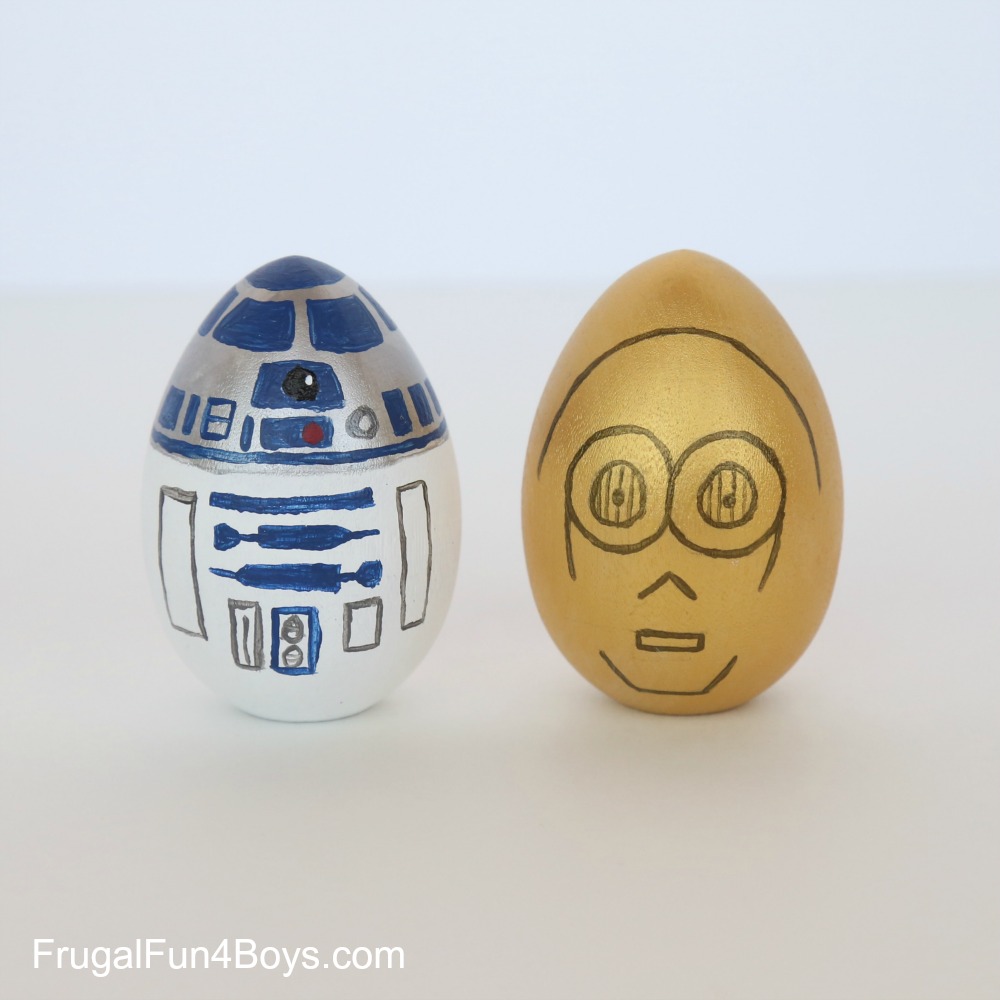 My first R2-D2 was a flop because I painted the body white and the head silver. The silver paint did NOT cover as well as the white, and the wood showed through! So then I started over and painted the whole body white. 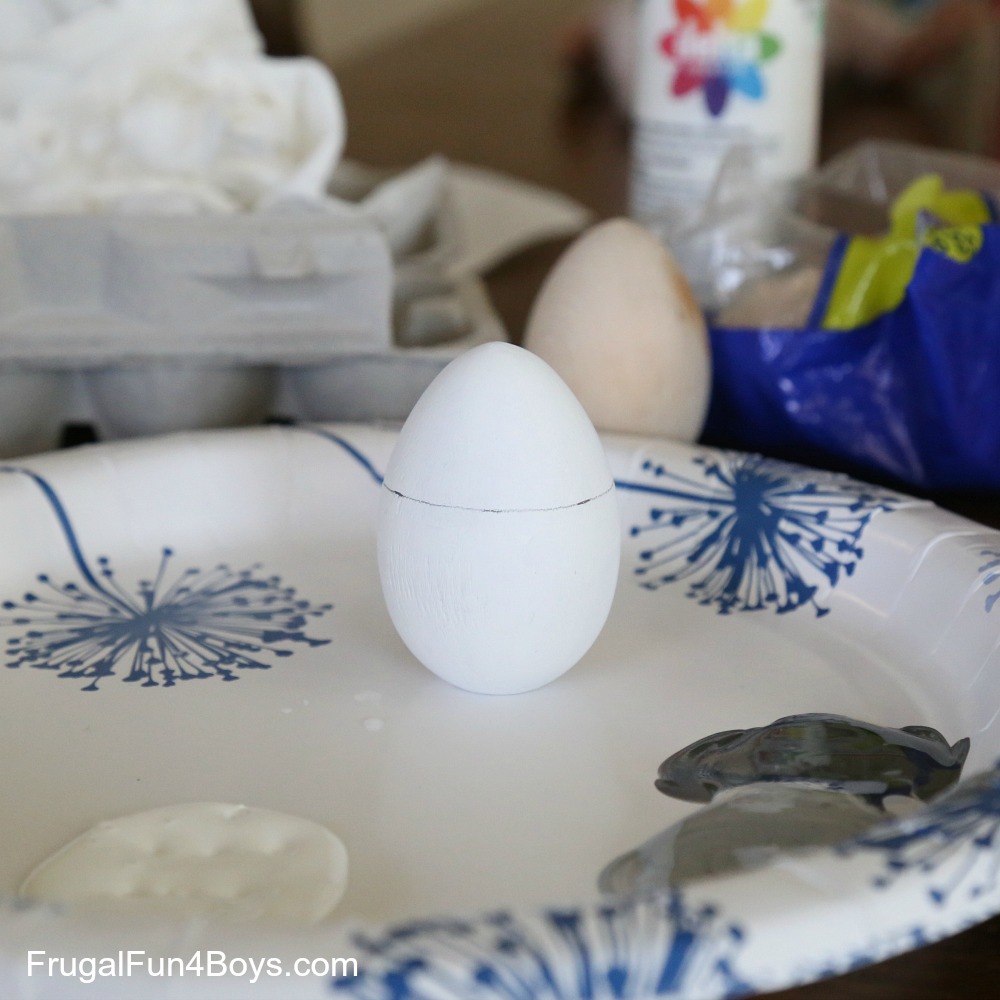 One the silver paint was dry, I drew on the details with a pencil before painting. 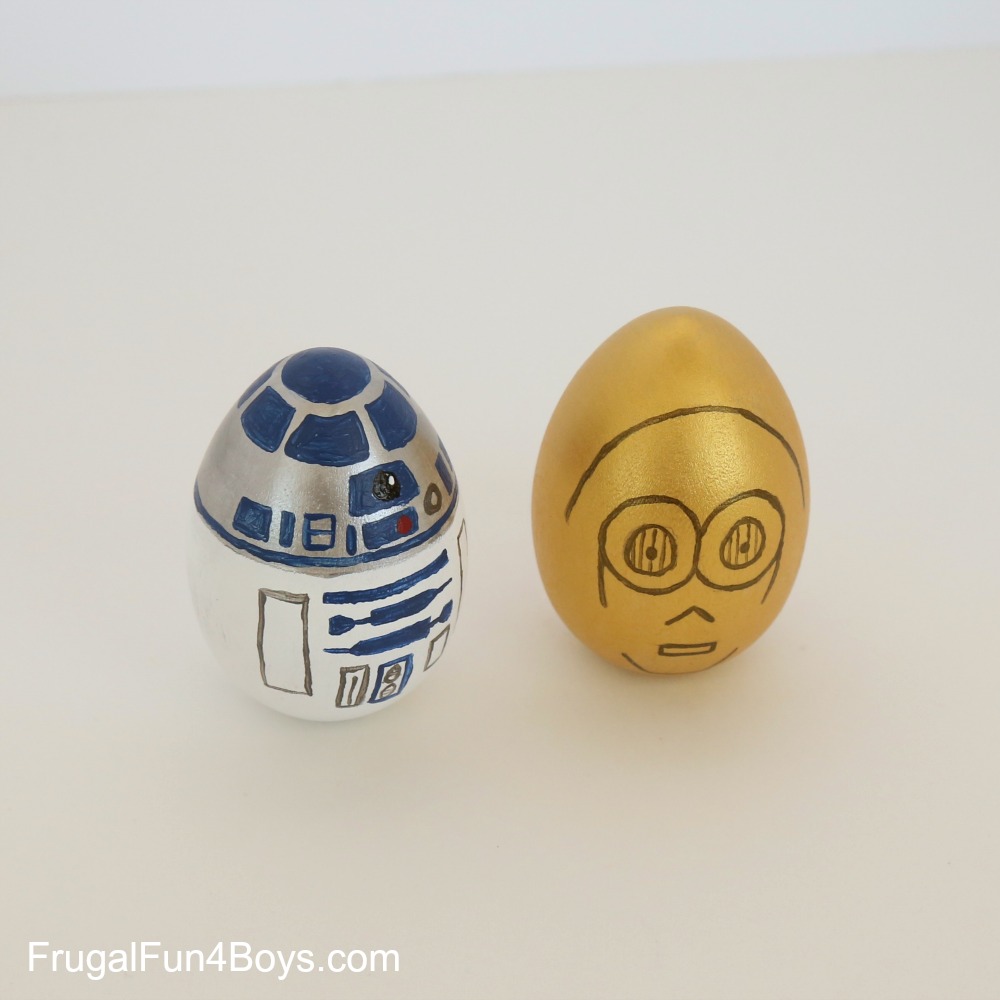 For C3PO, I looked online for clip art images of C3PO to decide how exactly to draw his face. This is the image I used – C3PO clip art (it’s the image that says “final step” on it), or feel free to copy my design.

Princess Leia and an Ewok

I used the LEGO Princess Leia as inspiration for the face, which worked quite well. 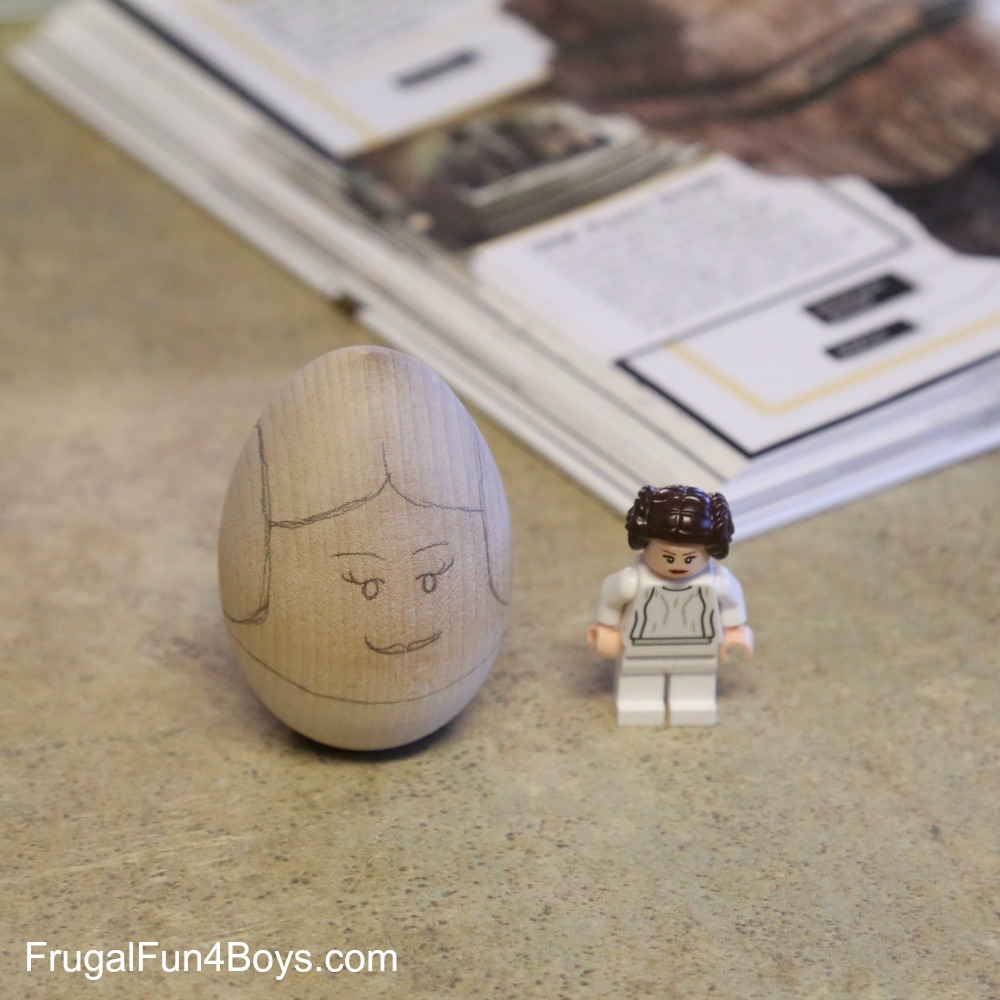 Like Luke and Han, the face color of paint didn’t completely cover the pencil drawing of the face, which was very helpful. 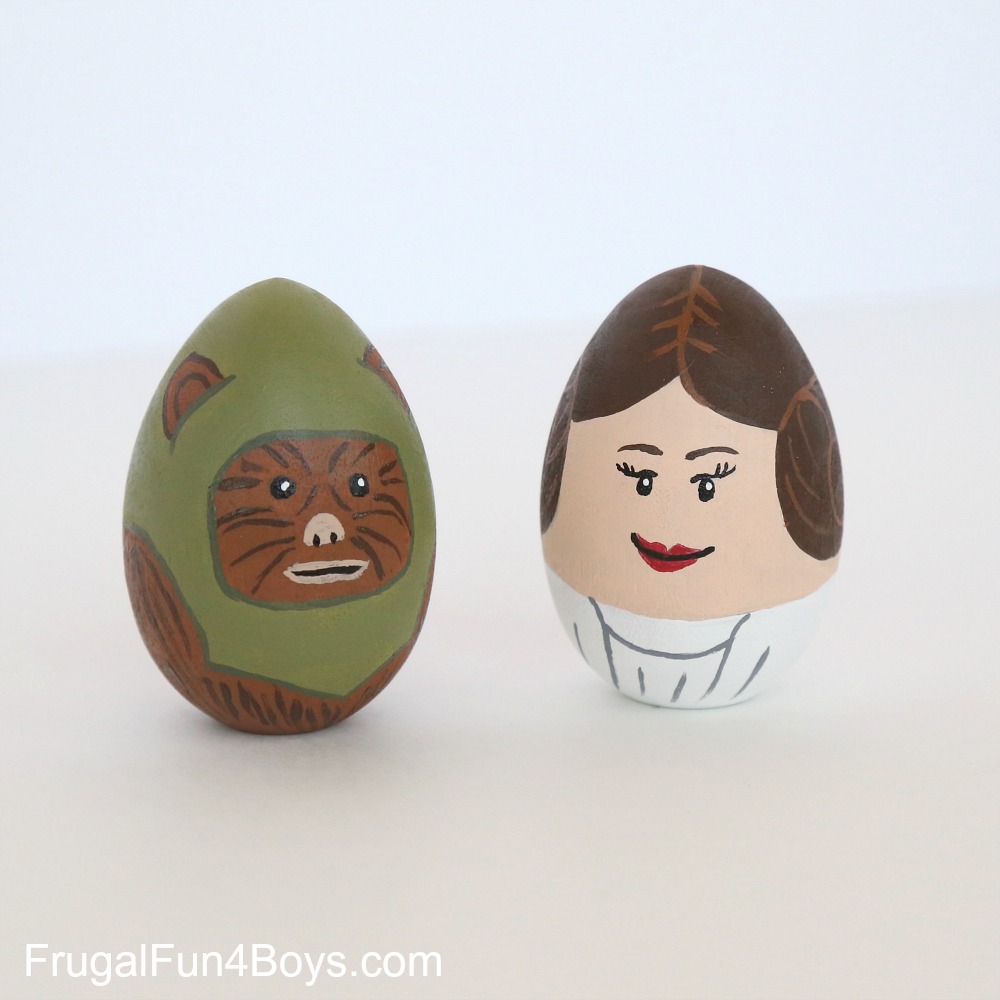 Here’s a view from the side. 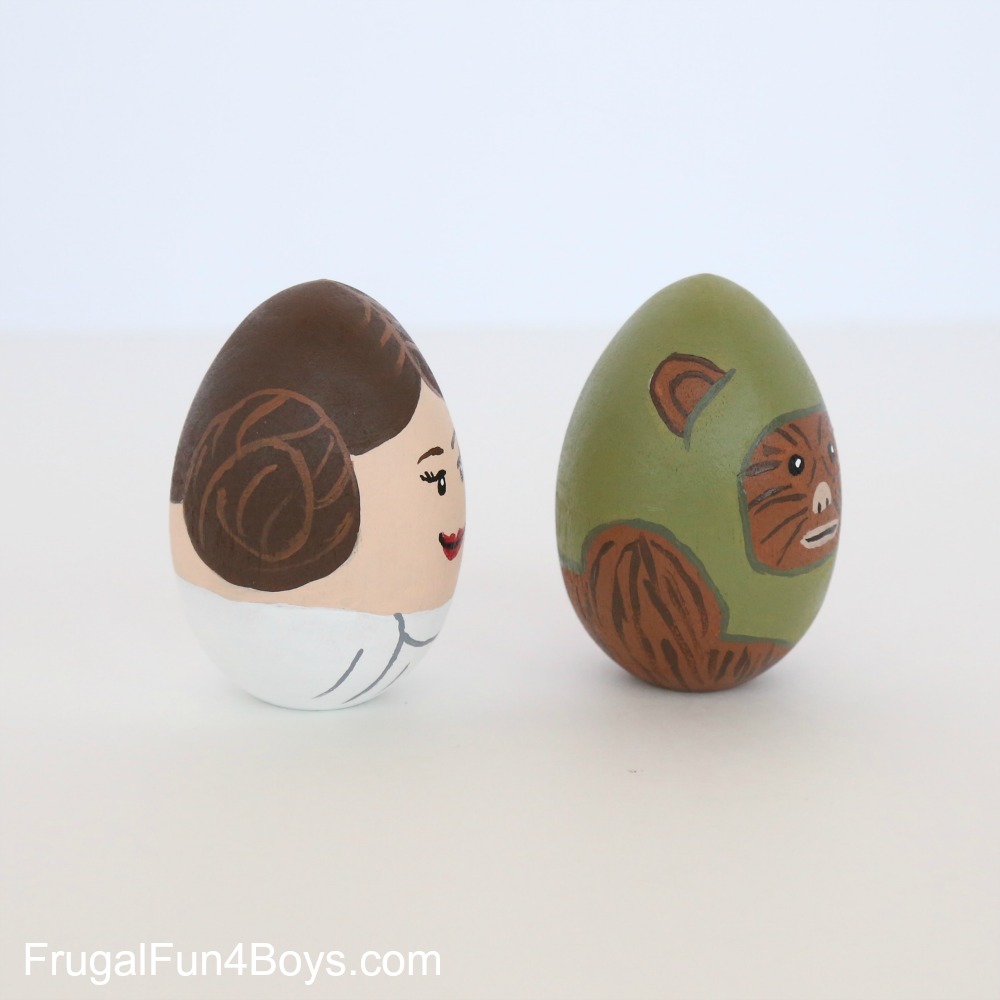 I added a little black to the green to make the outline color for the Ewok’s hood. 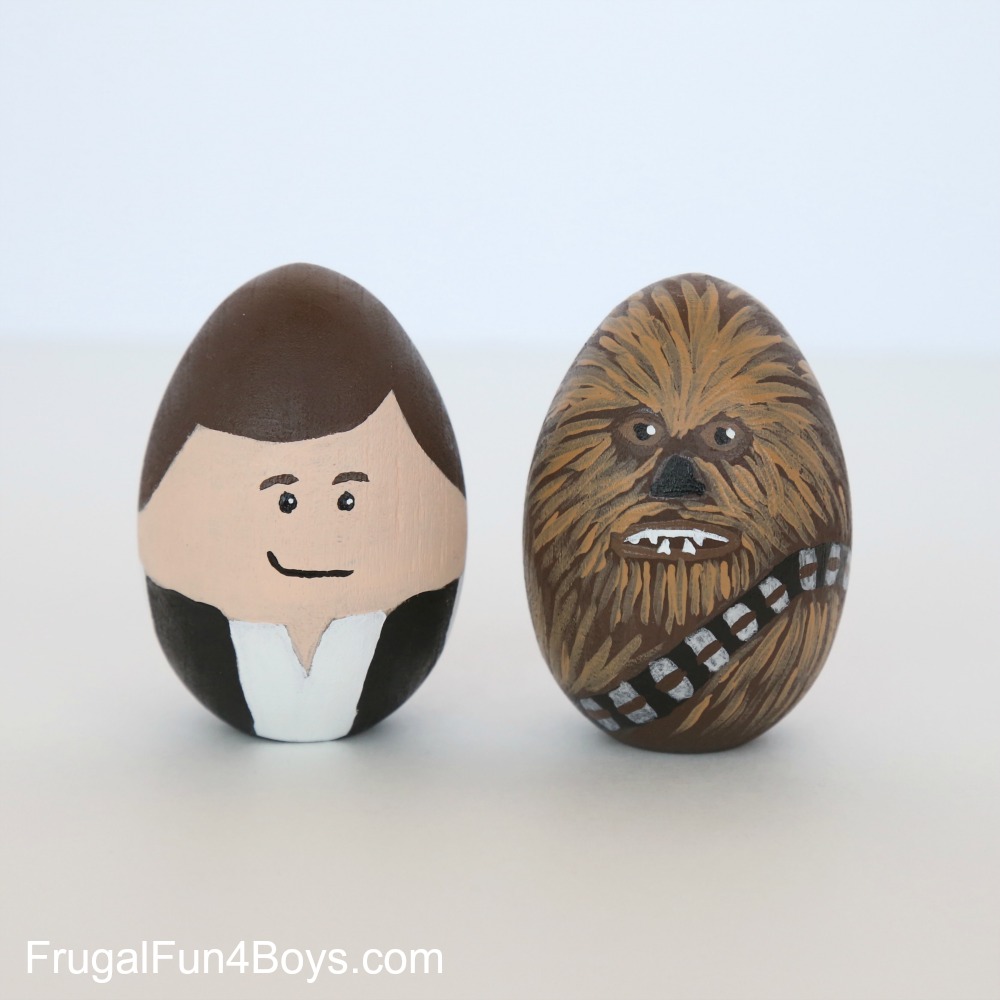 Han Solo is very similar to the design for Luke. For the faces on both, I looked at the LEGO minifigures for ideas. I didn’t want to attempt noses and make them look dumb – faces are hard to draw!

Chewbacca is not nearly as difficult as he looks. I started by painting the entire egg dark brown. Then I drew his face with a pencil. The bandolier is black, then silver rectangles, then brown for the strap details. I used the same color as Luke’s hair for his fur. 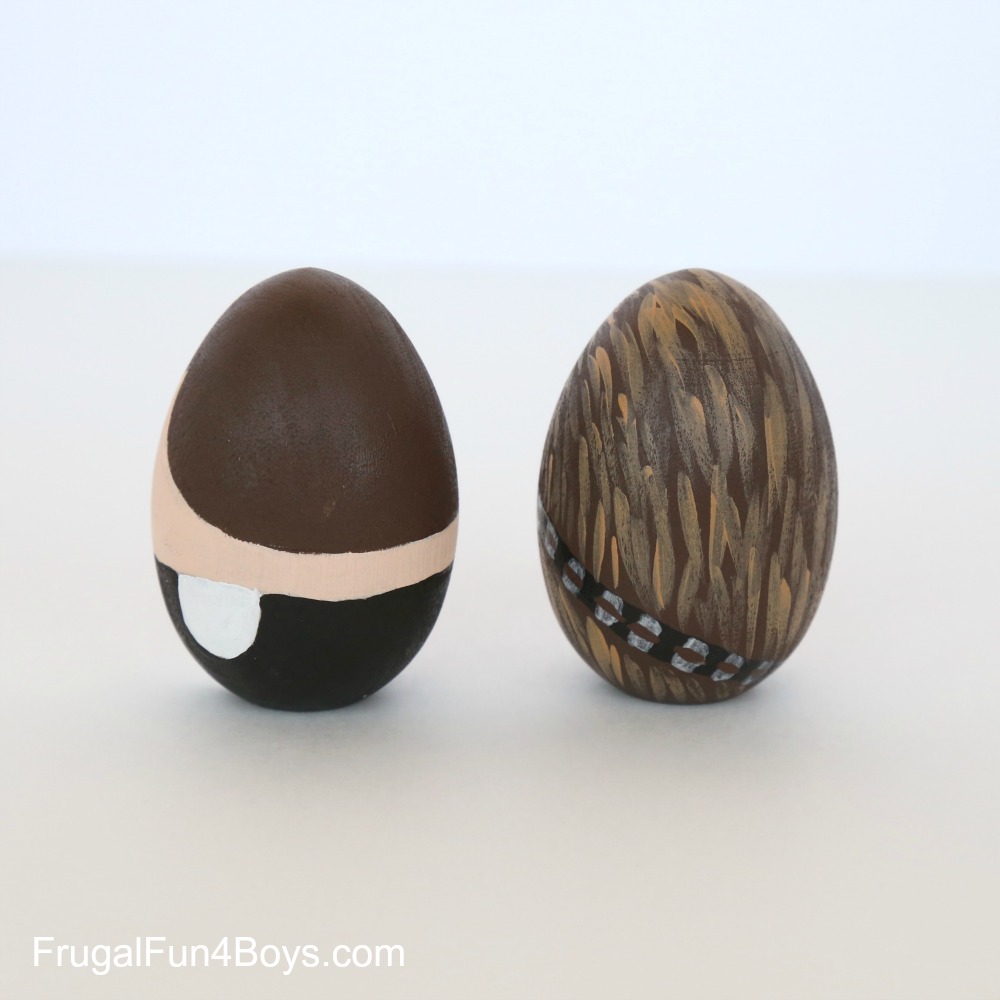 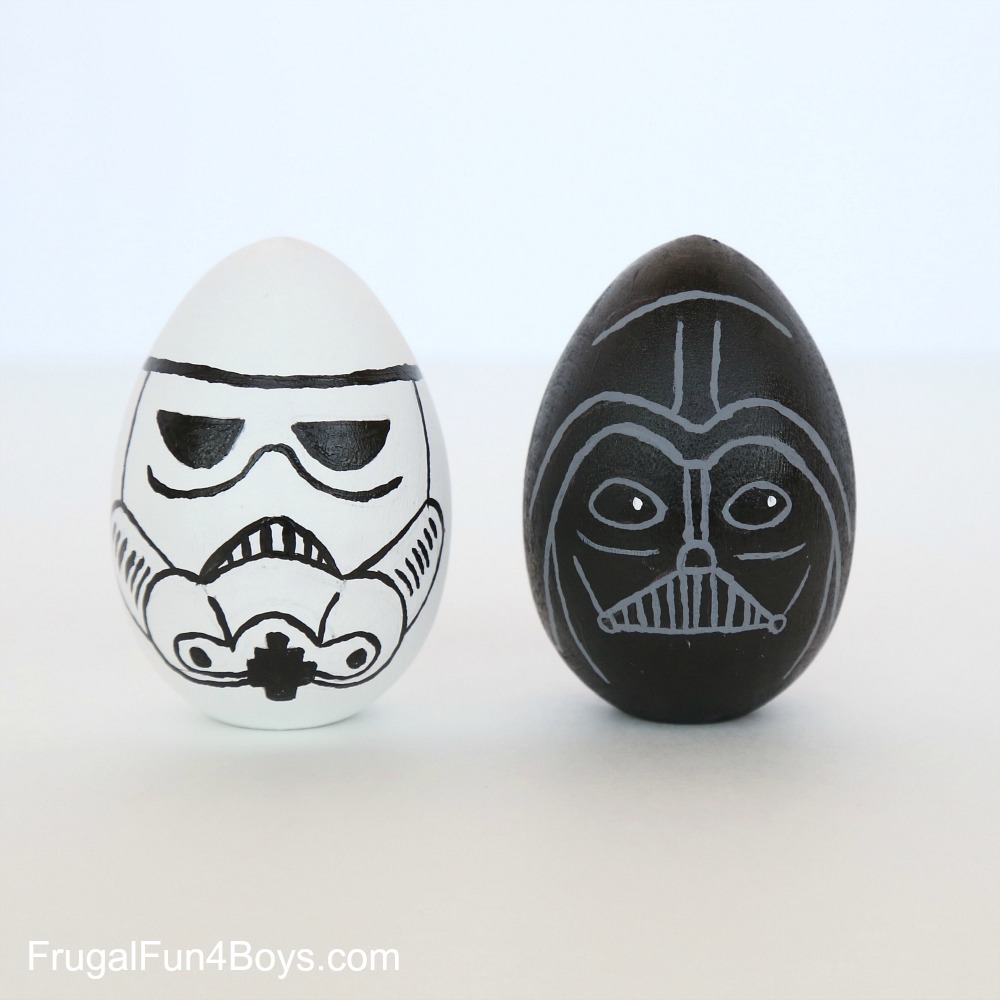 These two were super easy at first – just start with a solid white egg and a solid black egg! But then I had to figure out the faces! Again, clip art to the rescue because it simplifies the details. I used this storm trooper. The one I used is on the fourth row down.

I’m not completely happy with how Darth Vader turned out. He’s a little tricky to paint on an egg! 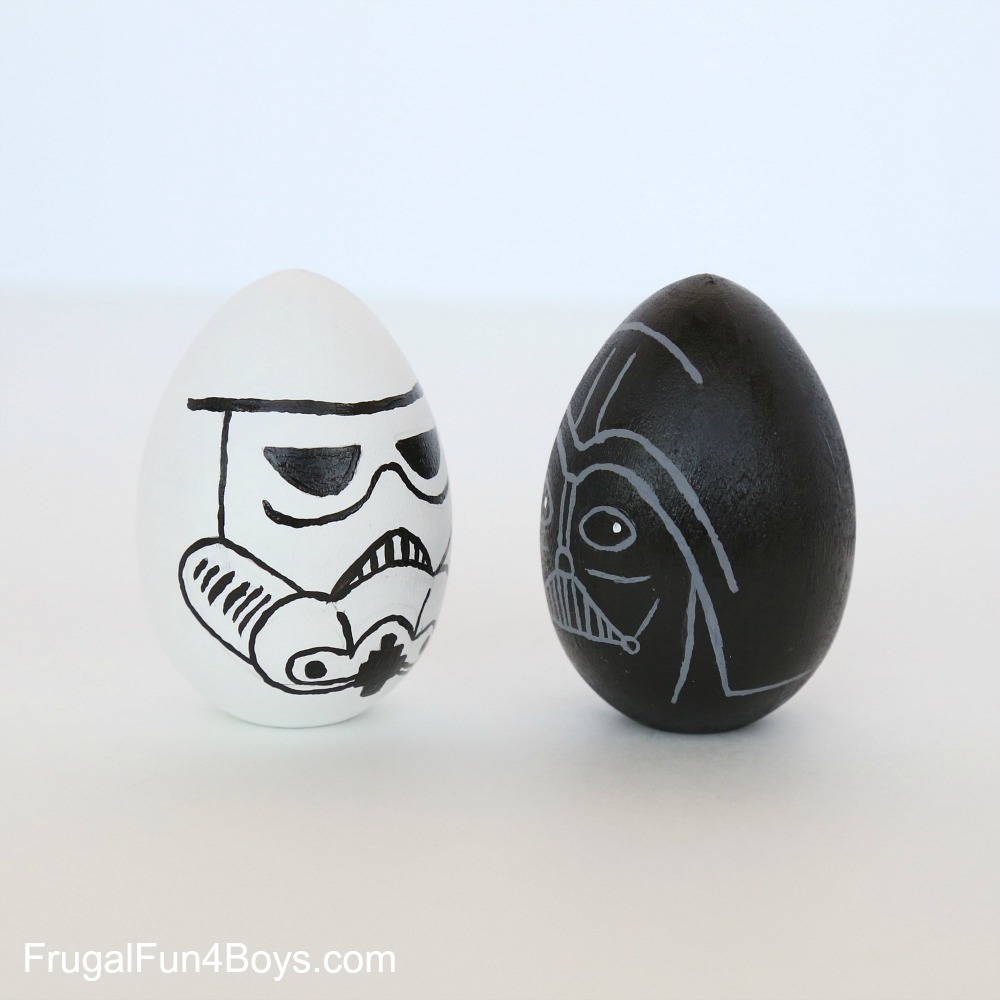 Need eggs? Here is a package of 6 2.5 inch wooden eggs on Amazon. 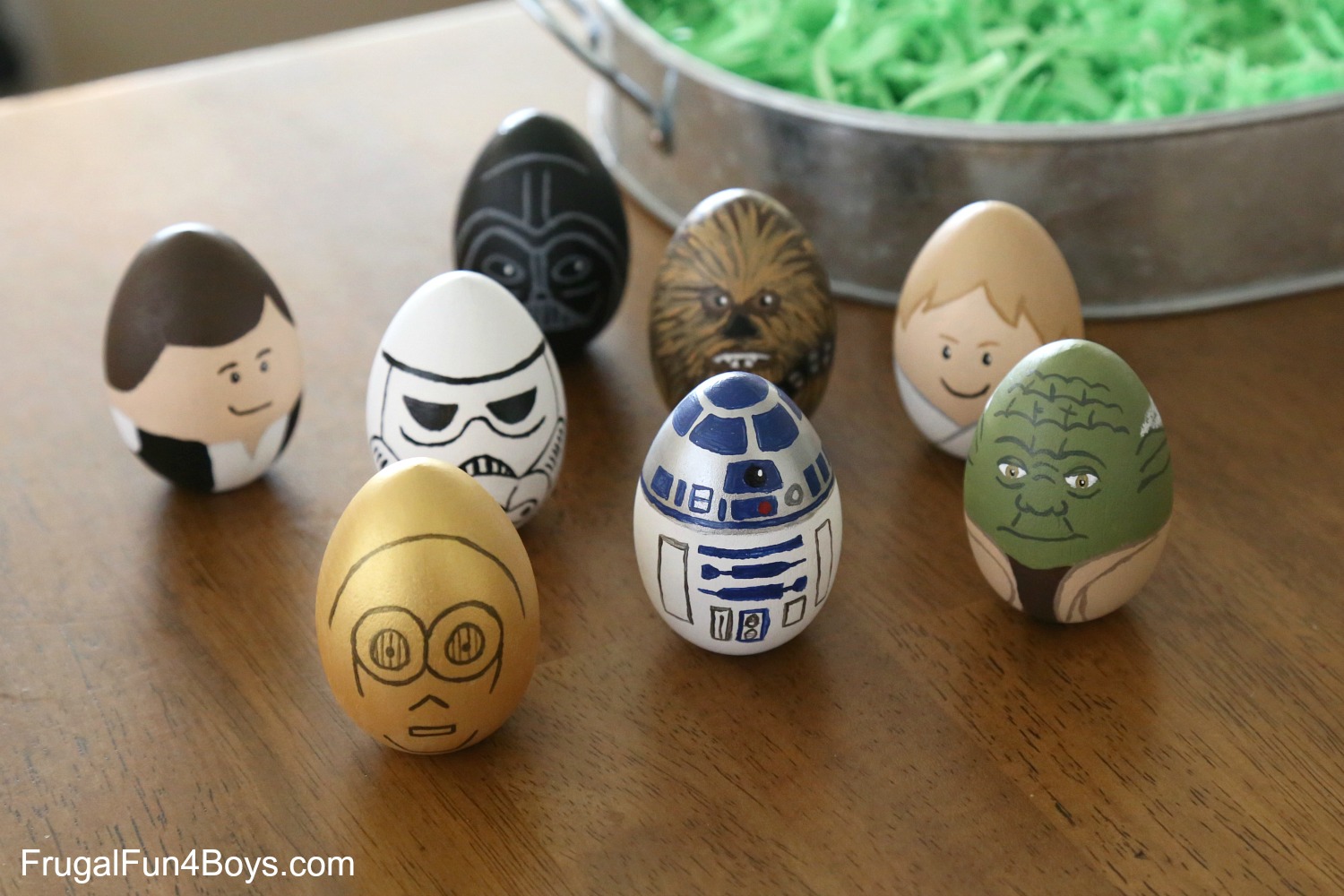 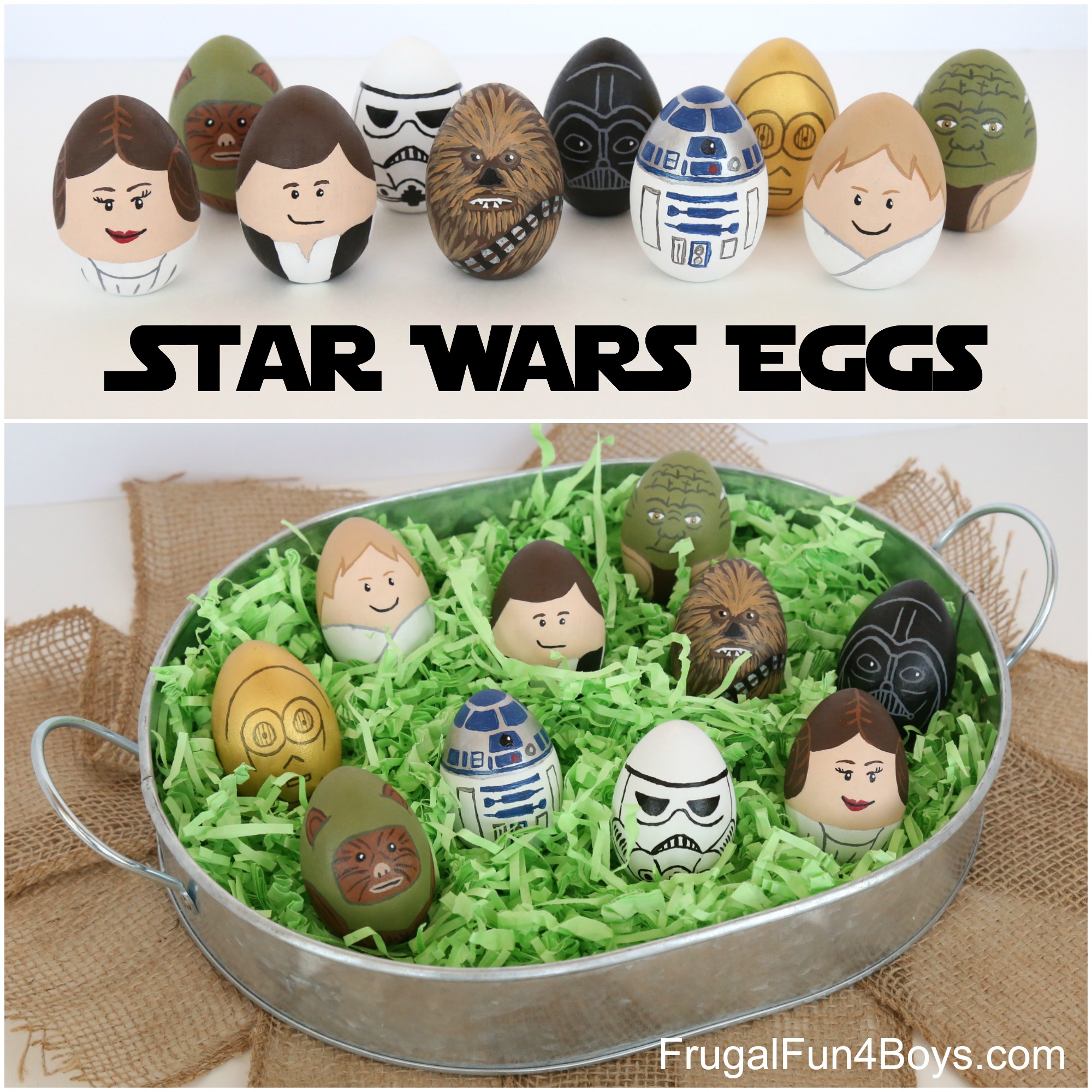