Use LEGO® bricks to play a fun and competitive cooperative game that kids will love! This is perfect for a LEGO® birthday party or club, or really any venue in which you need to keep a group of kids busy.

We’ll call it LEGO® Copycat or Duplicate the LEGO® Model… or choose your own name! This game is a LEGO-ized version of a game that my husband and I used to play at events with our church’s youth group back when we were youth leaders. The original game was called The Molecule Game, and it involved duplicating a “molecule” built out of marshmallows and colored toothpicks. 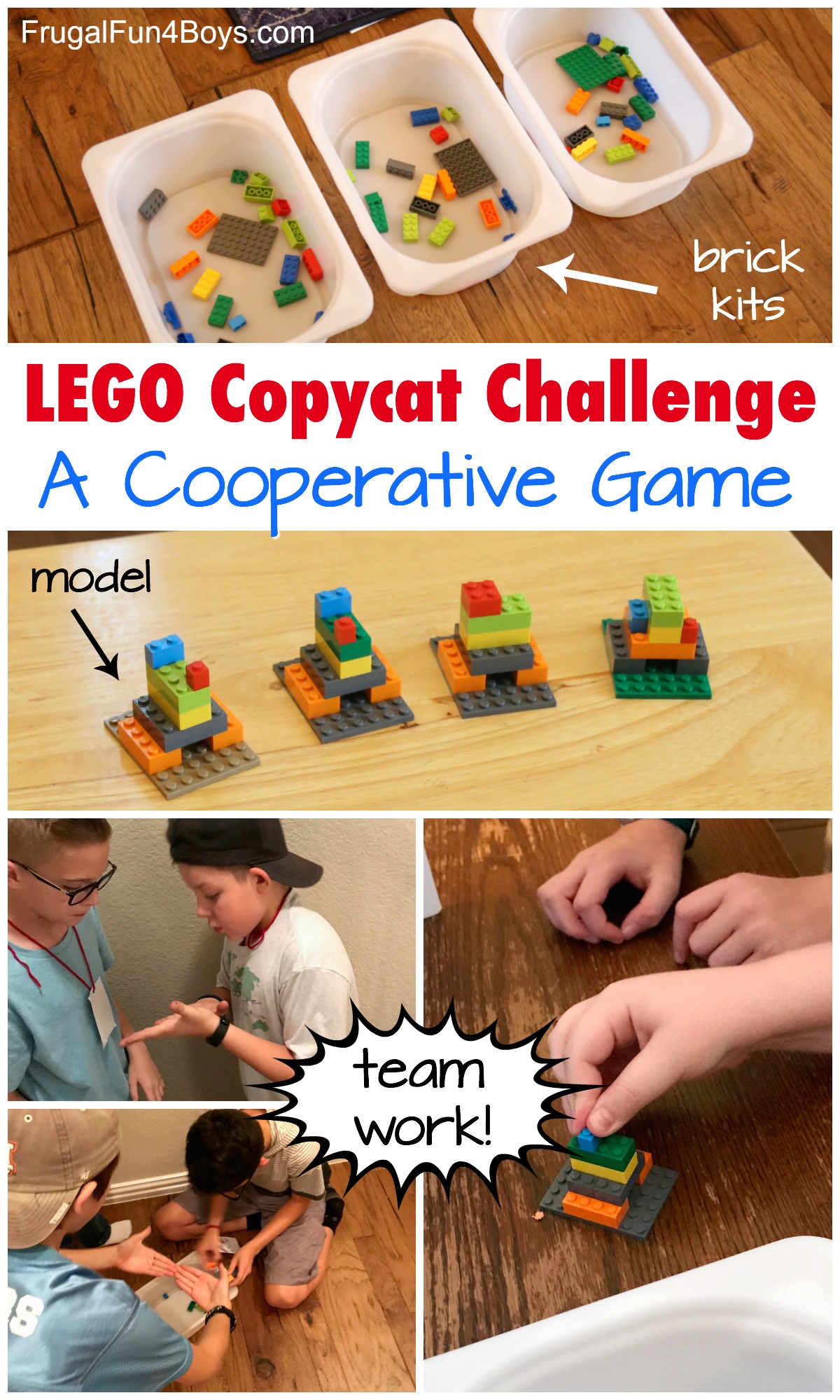 We played this game at Gresham’s 12th birthday party. (You can read about the entire party here – most of the games were a Dude Perfect theme!) I would recommend this game for ages 8+. Teens and adults will even enjoy this game, and I think it would work well for a family reunion or holiday party.

How to Play the Game

We divided the kids into three groups of 3. Each group assigned roles to the team members – a builder, a looker, and a messenger. Each team was given a building kit.

We did not have enough 6 x 8 plates for each group to have the same color, but otherwise the pieces in each kit were all the same size, shape, and color. We just told each group to use that brick for their base, regardless of the color. (Our 6 x 8 gray plates are probably tied up in all the projects for Genius LEGO Inventions…) 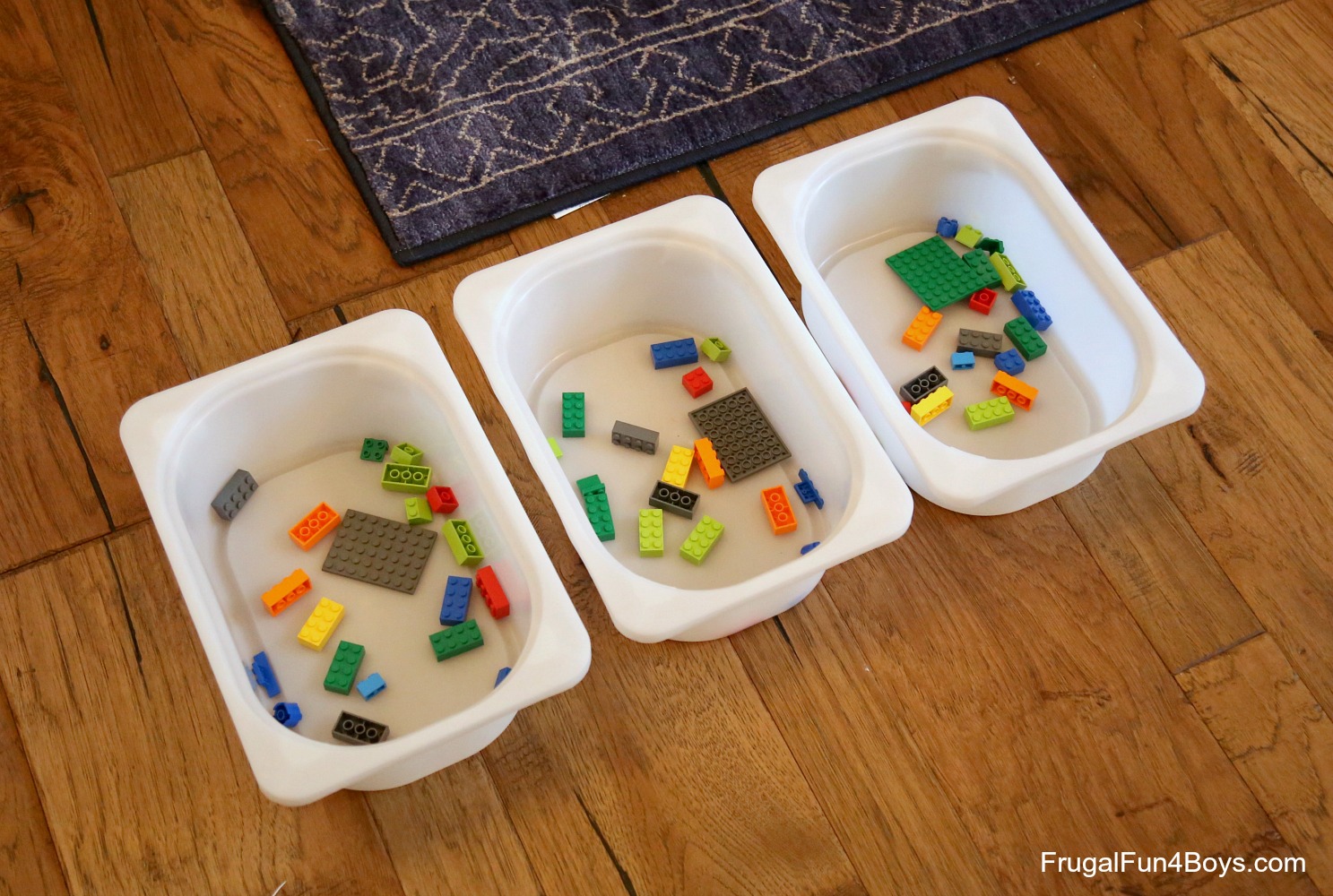 Builder: The builder can touch the bricks in the brick kit and build the model. He or she cannot leave their station.

Looker: The looker can go and see the LEGO® model. He or she can look as many times as needed! They can enter the room with the model and go back out, but they cannot go to the building station or see the model their team is working on as it’s being constructed.

The way it worked in our house is that the model was upstairs in the game room. The looker could come into the game room and go back out to the hall at the top of our stairs. The messenger could come up to the hallway but could not enter the game room. Each team had a building station downstairs. We used science fair display boards (tri-fold) to keep other teams from seeing their progress.

The first team to complete their model calls out that they are finished. At that point, the remaining teams have 60 seconds to come to a stopping point. (For younger kids, I might give an additional 2-3 minutes.)

Here’s a sample of one of the models I created. You’ll want to keep it simple! 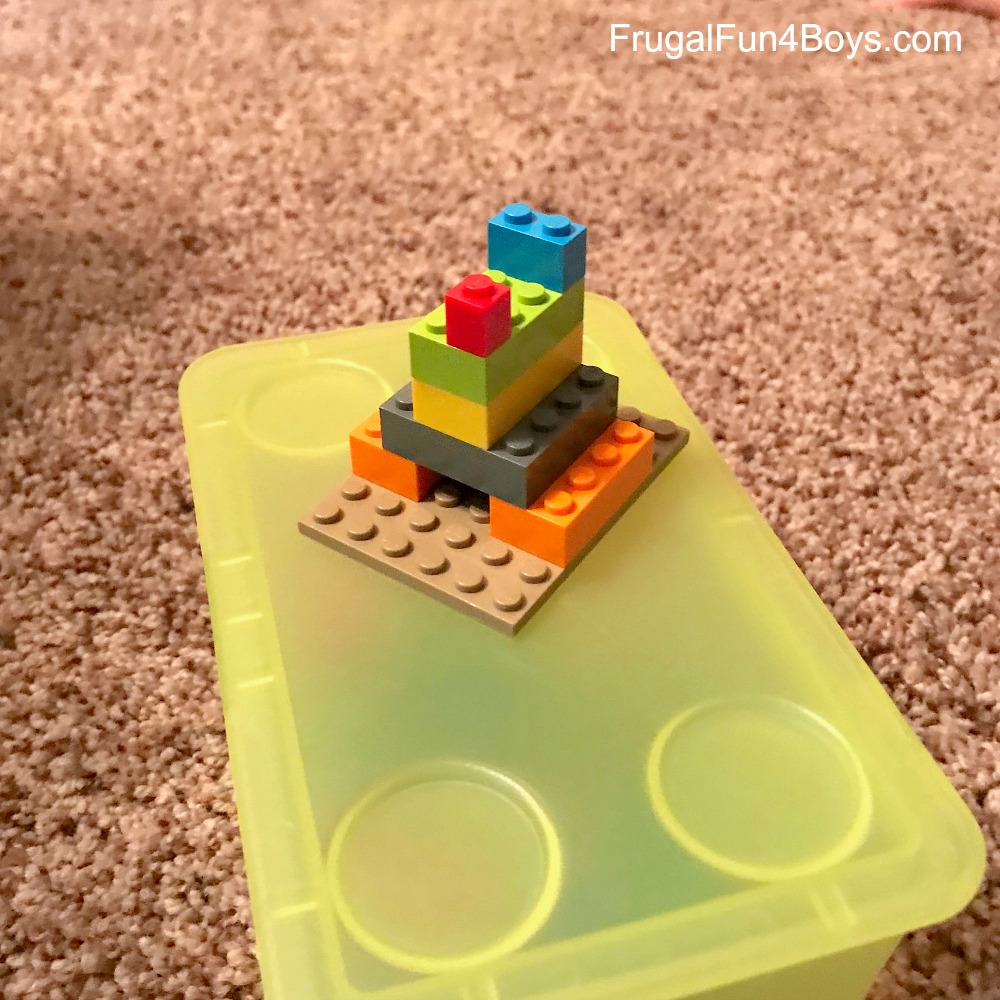 The guys at Gresham’s party found this game totally energizing! You can see the excitement and fun in these photos.

As an educator, I couldn’t help but notice all the great communication going on! Teams had to figure out how to approach building the model. The most successful groups started at the bottom and explained only one layer at a time. Teams had to use specific language – counting the number of studs, observing the exact position of the bricks, etc. They had to figure out how to relay what they had seen in a way that their team members could understand. 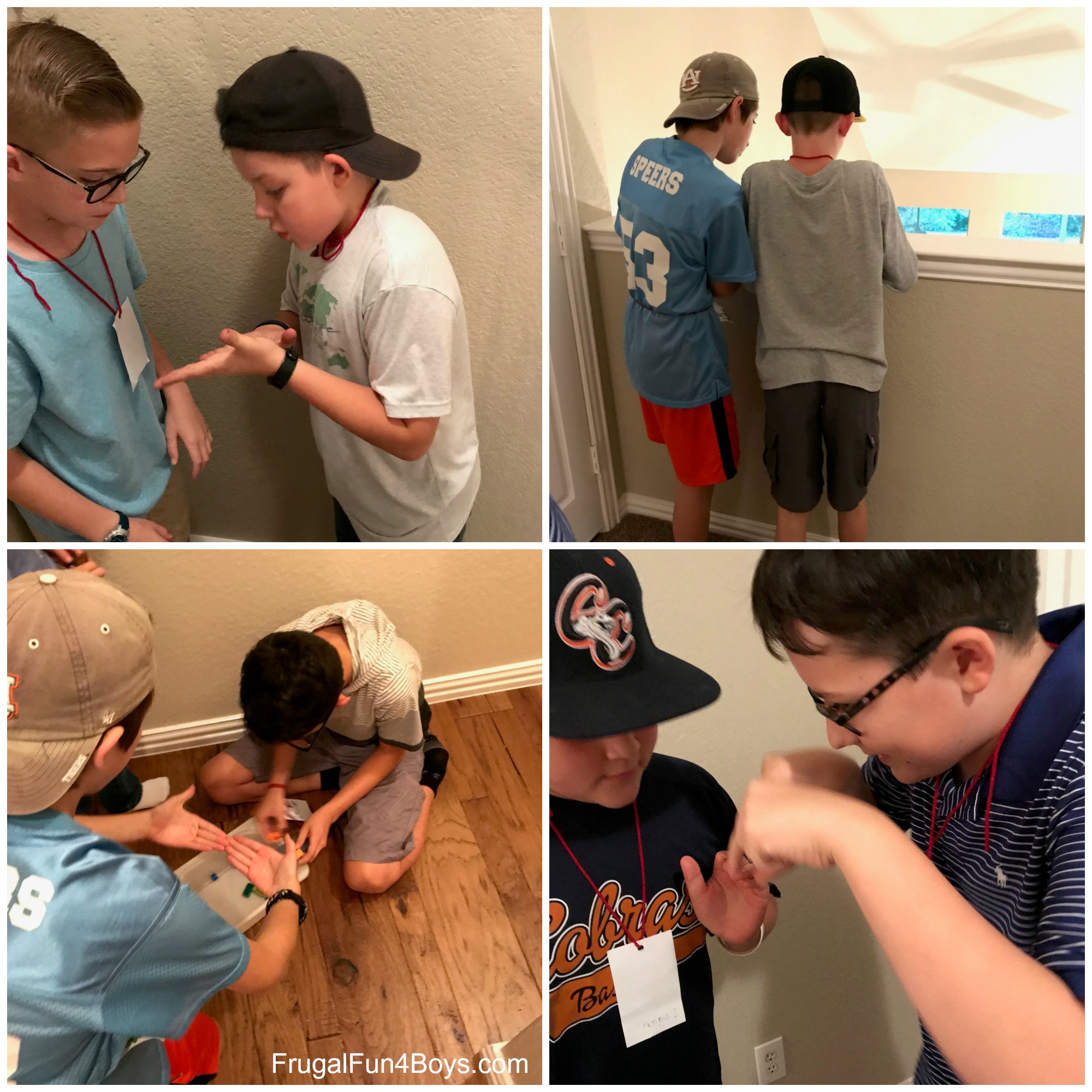 As I mentioned earlier, this game was part of a birthday party. We played three rounds and awarded a first, second, and third place prize for each round based on how close each team got to the original model.

In this round, 2nd and 3rd places were kind of a tie. As you can see, one team was very close with the only difference being a dark green brick instead of a lime green brick and a slight position difference with the red brick. They got first place. Of the other two teams, one team had all the right bricks, but the colors on the bottom two layers were reversed. The remaining team was lacking a brick but had the first two layers correct. The third and fourth layers were the right bricks, but turned the wrong way. 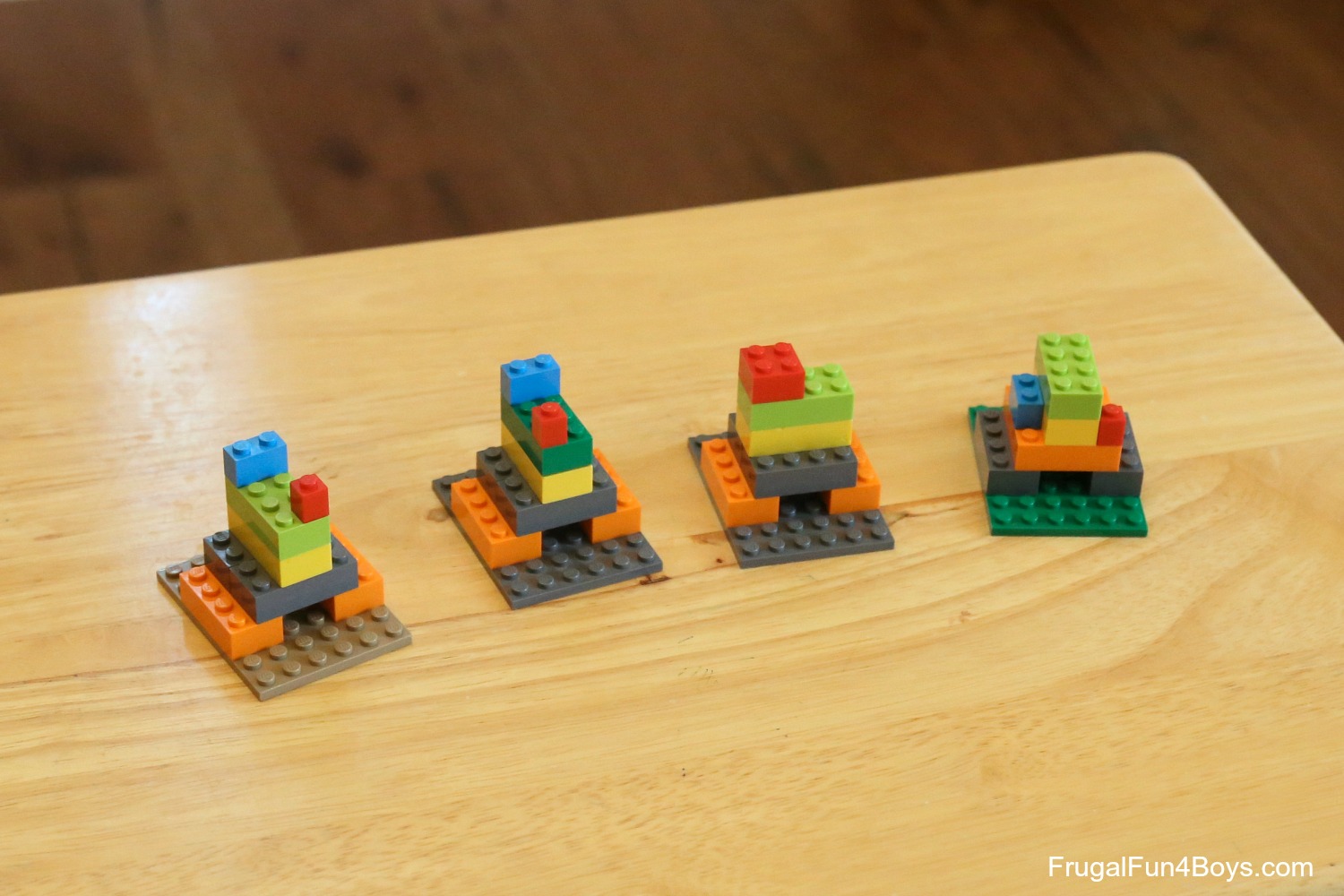 If you try this game, I’d love to hear how it went! 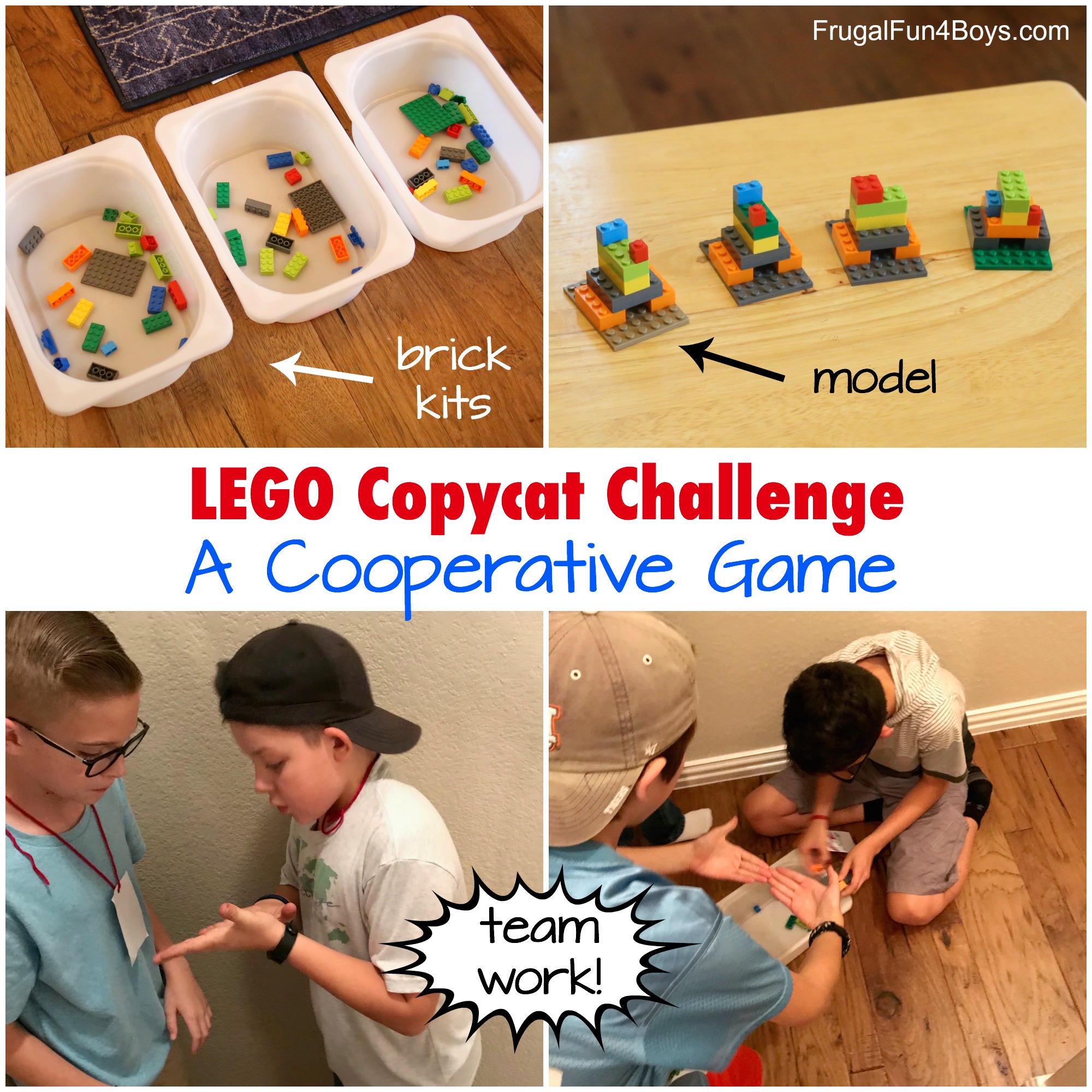