Here’s a fun project that will look awesome in any LEGO® fan’s room! Make a LEGO letter mosaic to hang on the wall or display on a shelf. Kids can even build on it and attach their favorite bricks and minifigures.

The bottom layer of bricks (well, plates – the flat pieces) are glued down, but the rest of the bricks and can moved around or removed. 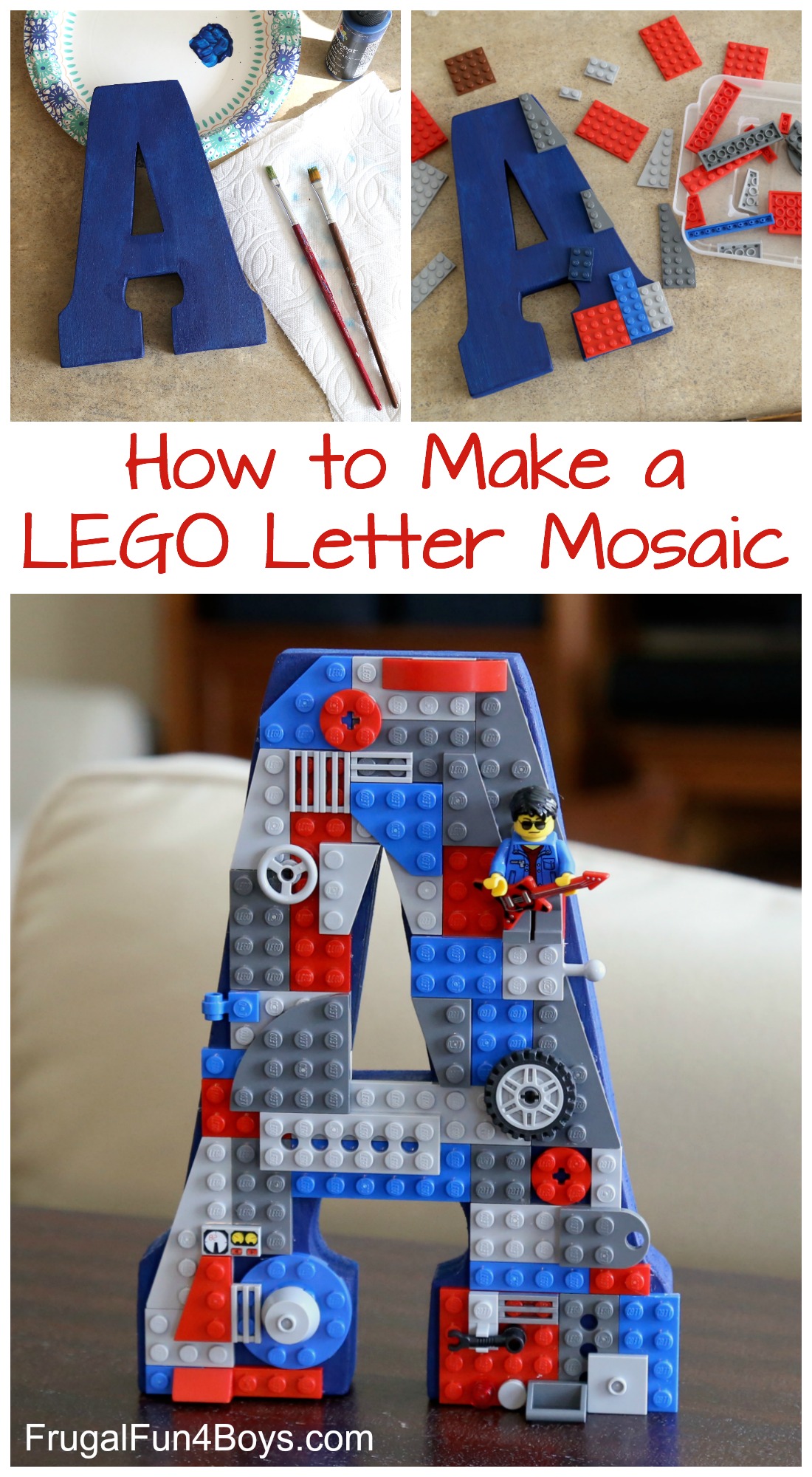 I have seen LEGO® letter mosaics for sale on Pinterest, and they usually have a huge variety of bricks glued on in a random arrangement. While these look really awesome, I decided that I wanted this letter to be buildable. The layer of bricks that I glued on are all arranged so that the studs line up and you can build on them.

Step 1: Paint your letter with a coat of acrylic paint. 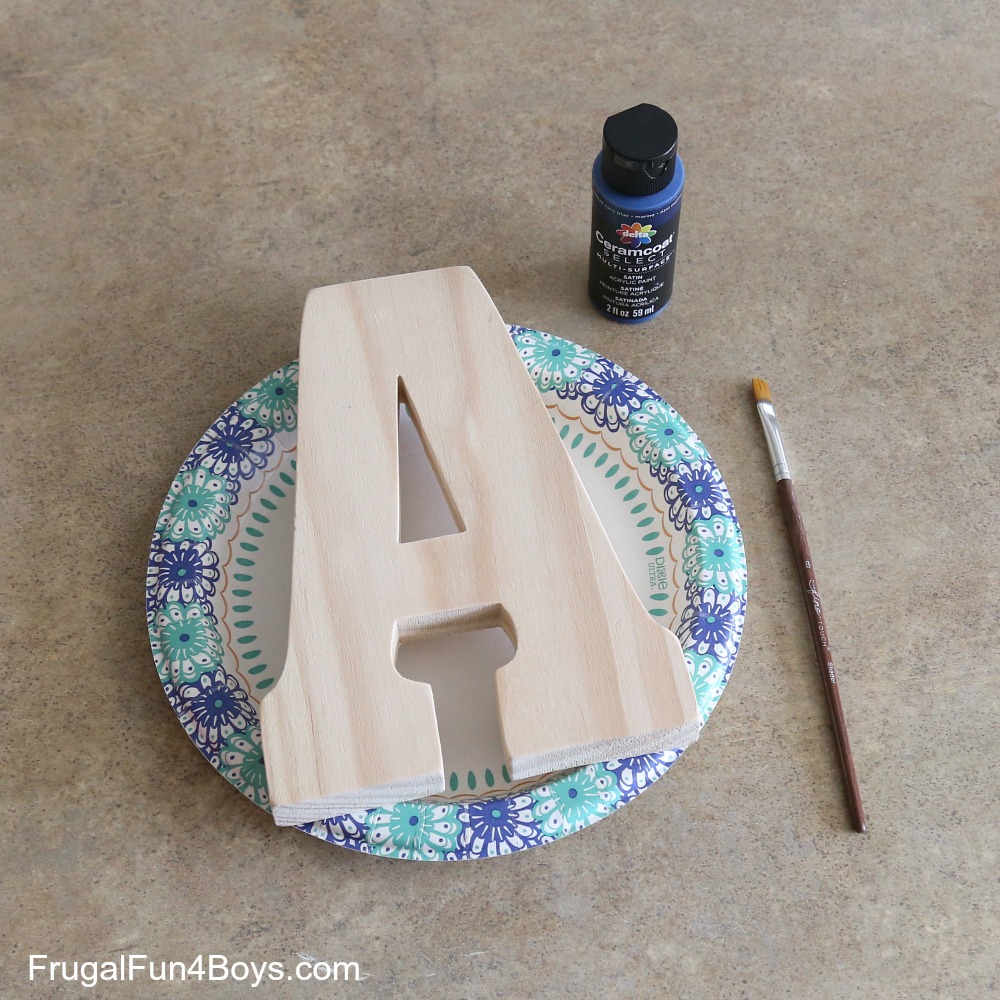 Be sure to paint all sides of your letter. If you’re planning to hang it on the wall, it’s not necessary to paint the back. 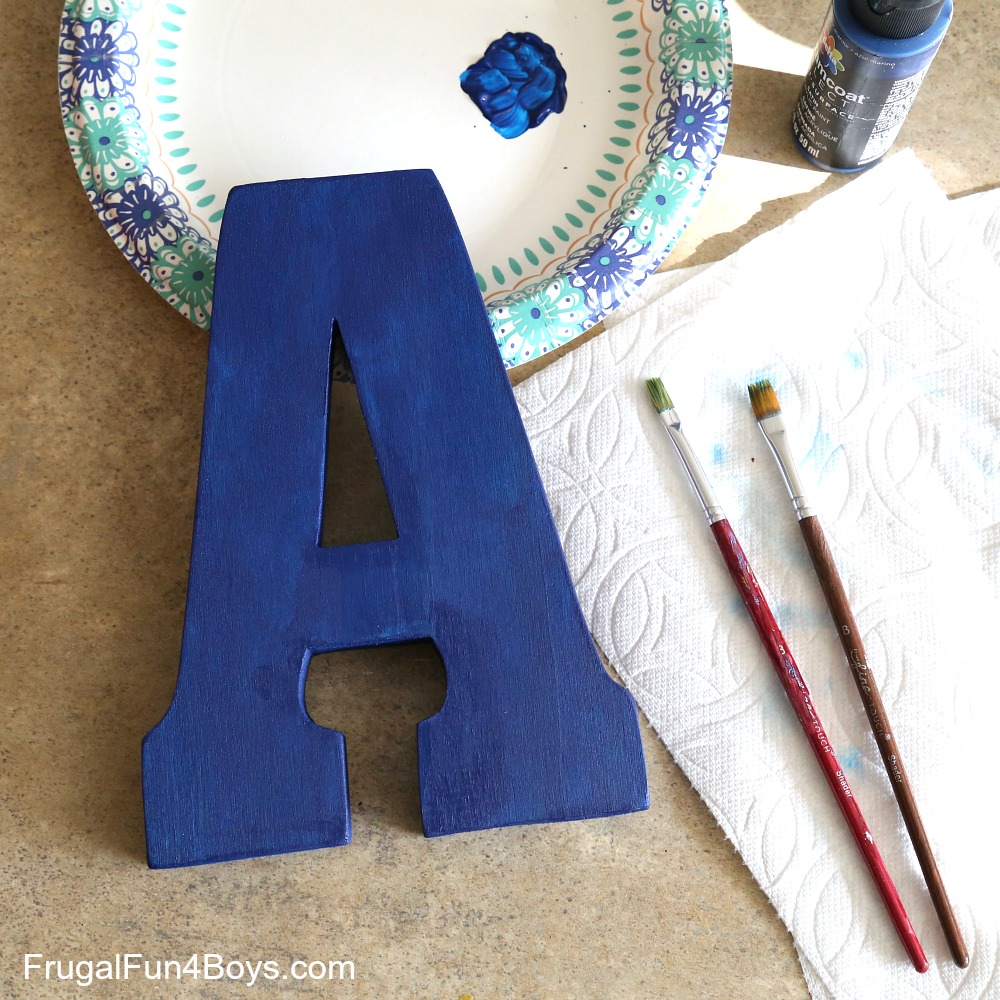 Step 2: Choose a color scheme and plan out your brick arrangement.

Kids can use any color of bricks they want, of course, but I think it looks best to pick a color scheme of 3-4 colors. The bricks (plates) that you glue down won’t be usable for anything else after this project, so keep that in mind. Then it’s best to plan out the arrangement of the bricks before you start gluing. 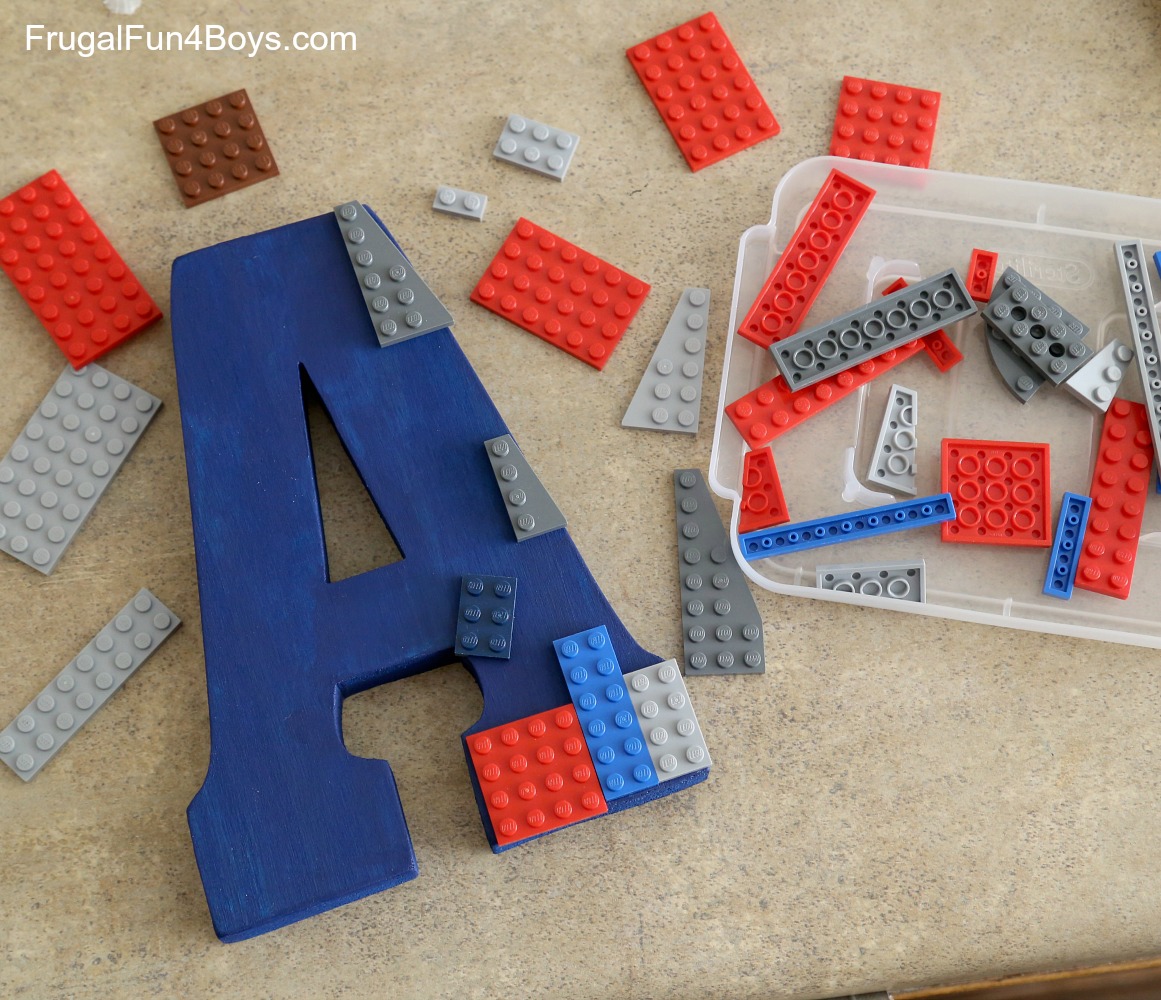 Step 3: Glue the plates to the letter. I used hot glue, and I think it will hold up well. I tested it by gluing down one brick and then trying to pull it off. It’s on there very tight! If you want some extra assurance, you can use super glue. Personally, I don’t love working with super glue and this seemed like enough hold to me.

Tip: To make the studs line up correctly, you’ll want to connect the plates by using another plate on top as you glue them down.

Make sure that your first plate is lined up nice and straight, or EVERYTHING else will be crooked! 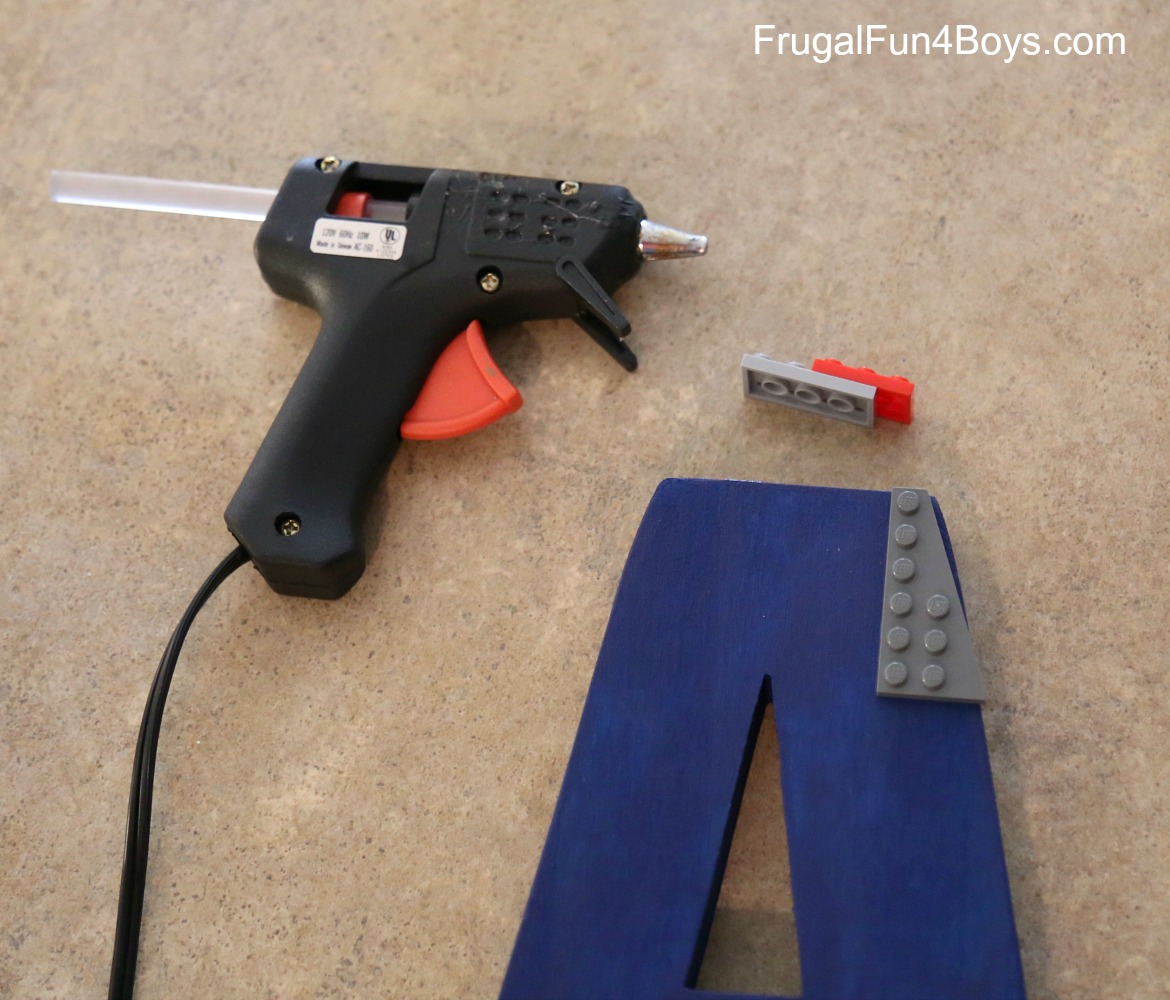 Use the red plate to attach the plates as shown below.

Once the glue has hardened for a few minutes, you can remove the red plate. 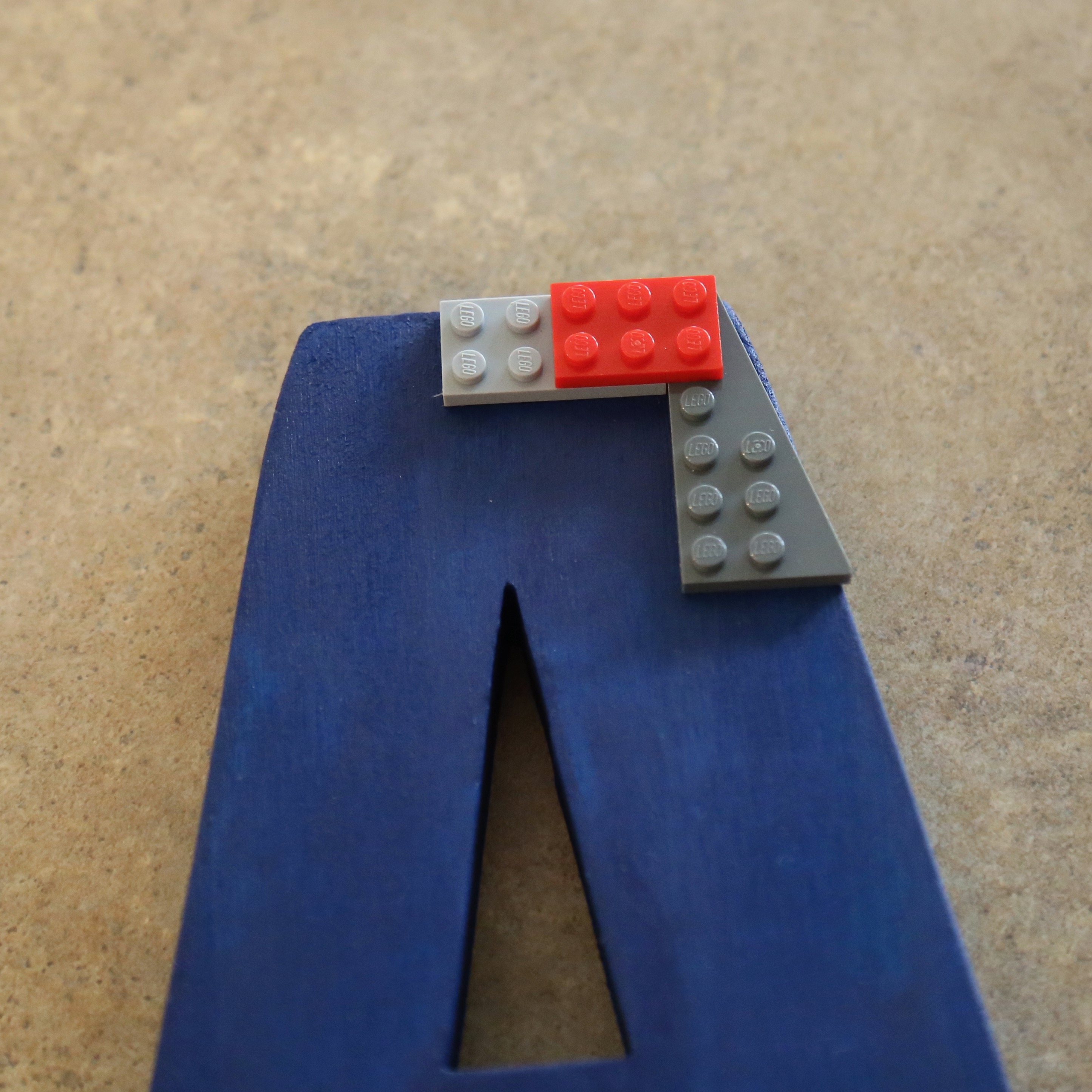 Step 3: Keep gluing until you have covered the wood letter!

(Sorry the lighting is so wacky – the sun had gone down and I was stuck with only fluorescent light.) 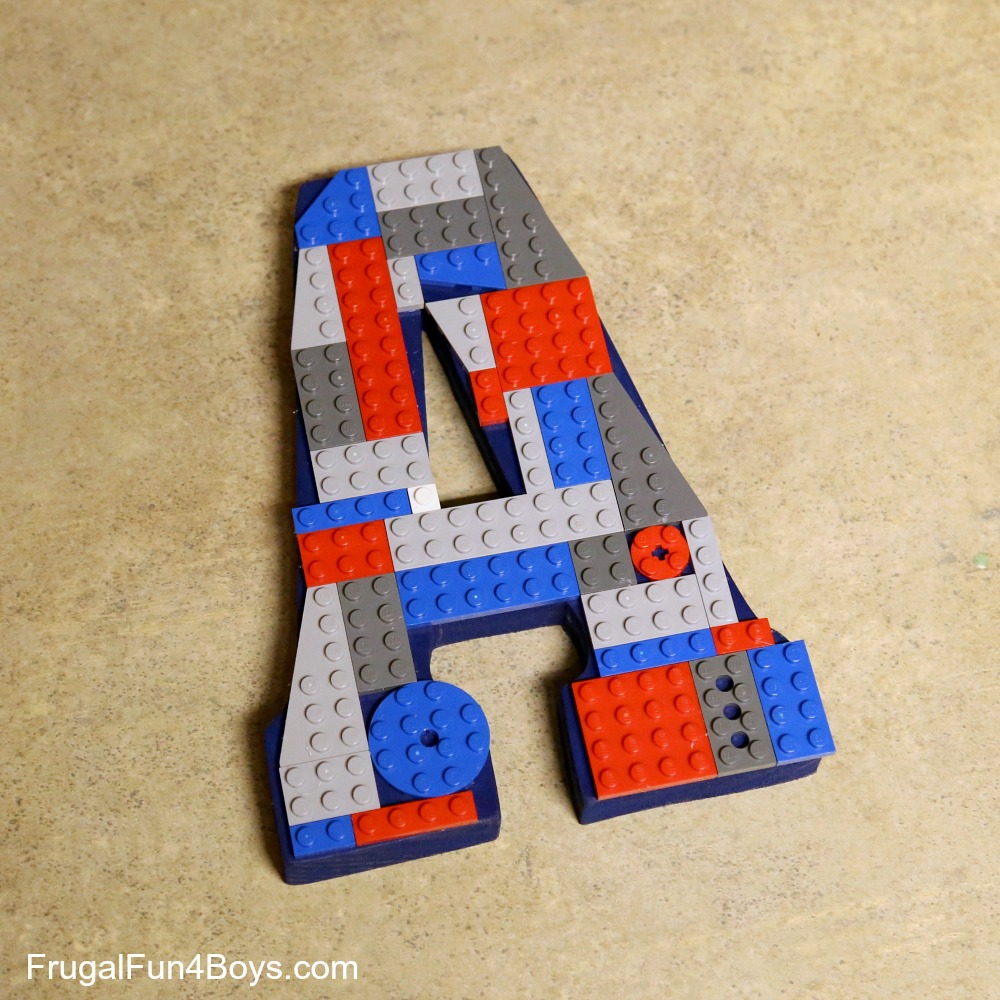 Step 4: Now add another layer or two of bricks! Use plates, round bricks, and even minifigures. Minifigure legs will attach to the letter. 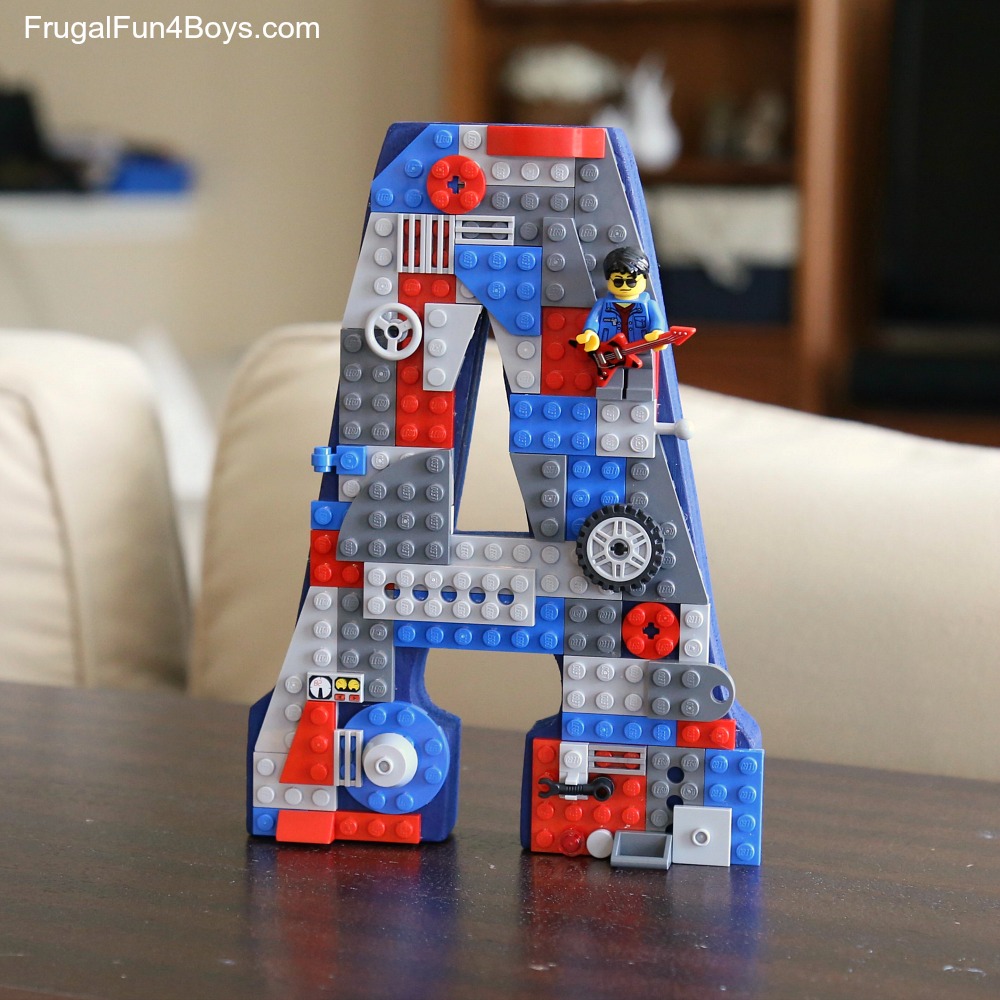 Here’s how I attached the wheel. It’s attached to a 2 x 2 tile with a pin, and it really turns! 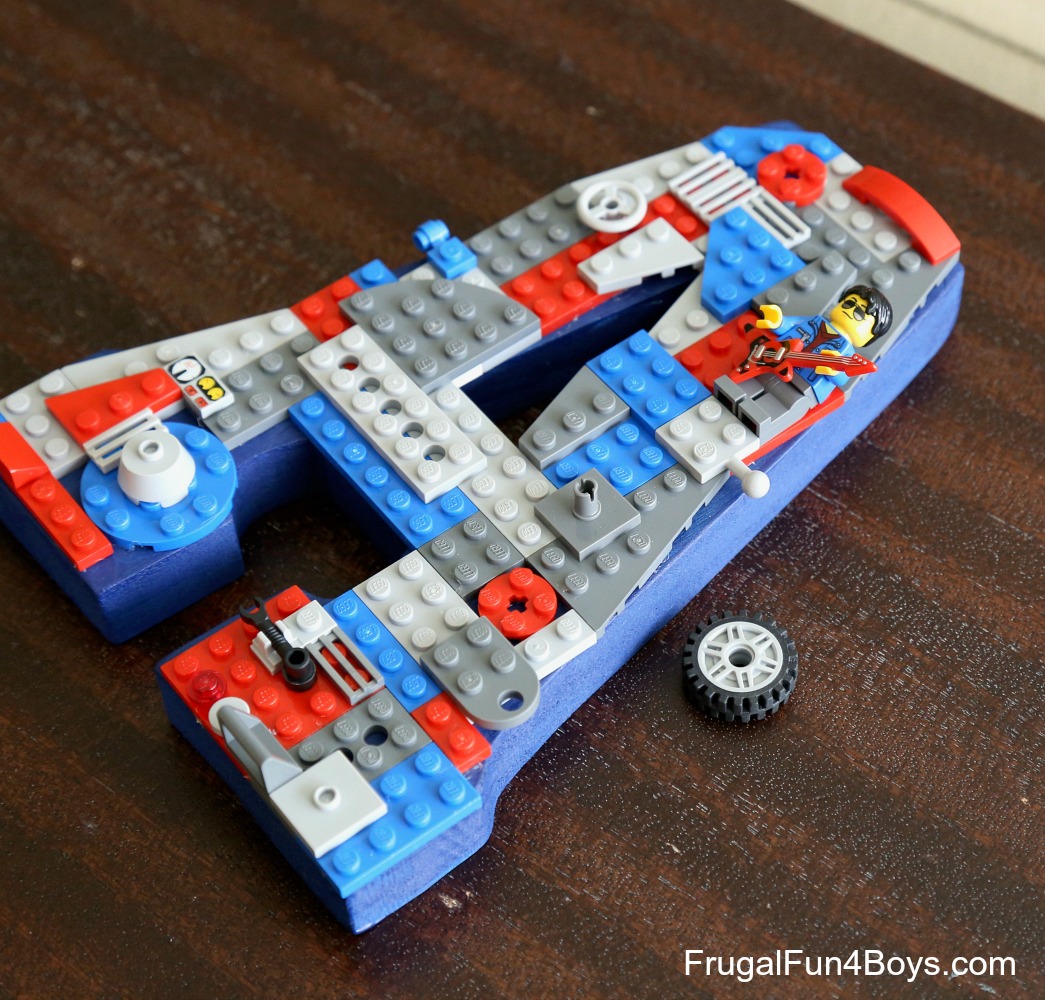 This A is going to be Aidan’s, so he chose to put his favorite guitar playing minifigure on it. It turned out super cute!

Have fun crafting! Here are more LEGO® ideas that you might enjoy!

Turn an IKEA frame into a LEGO® minifigure display! 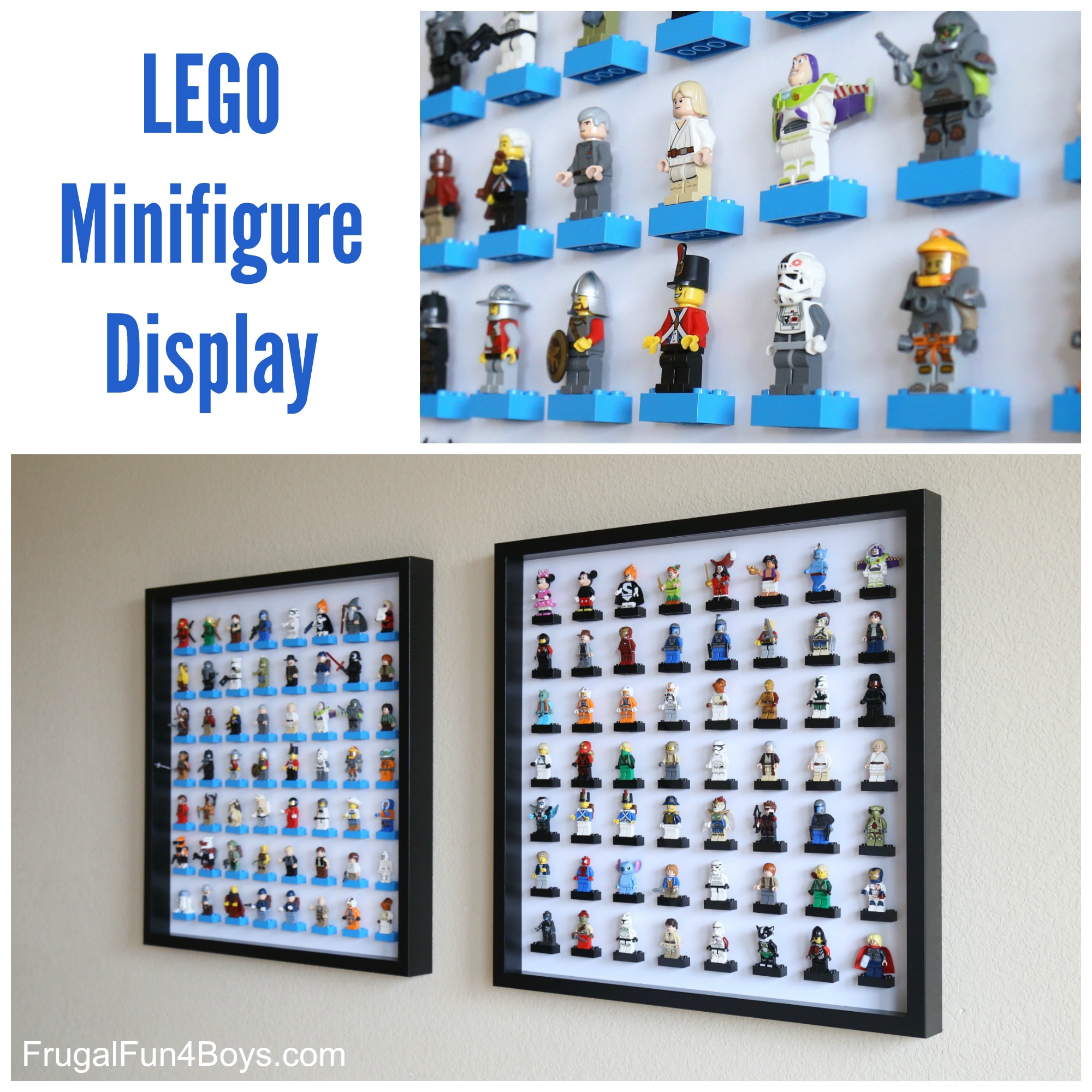 Make your own LEGO® Wall & Play Board 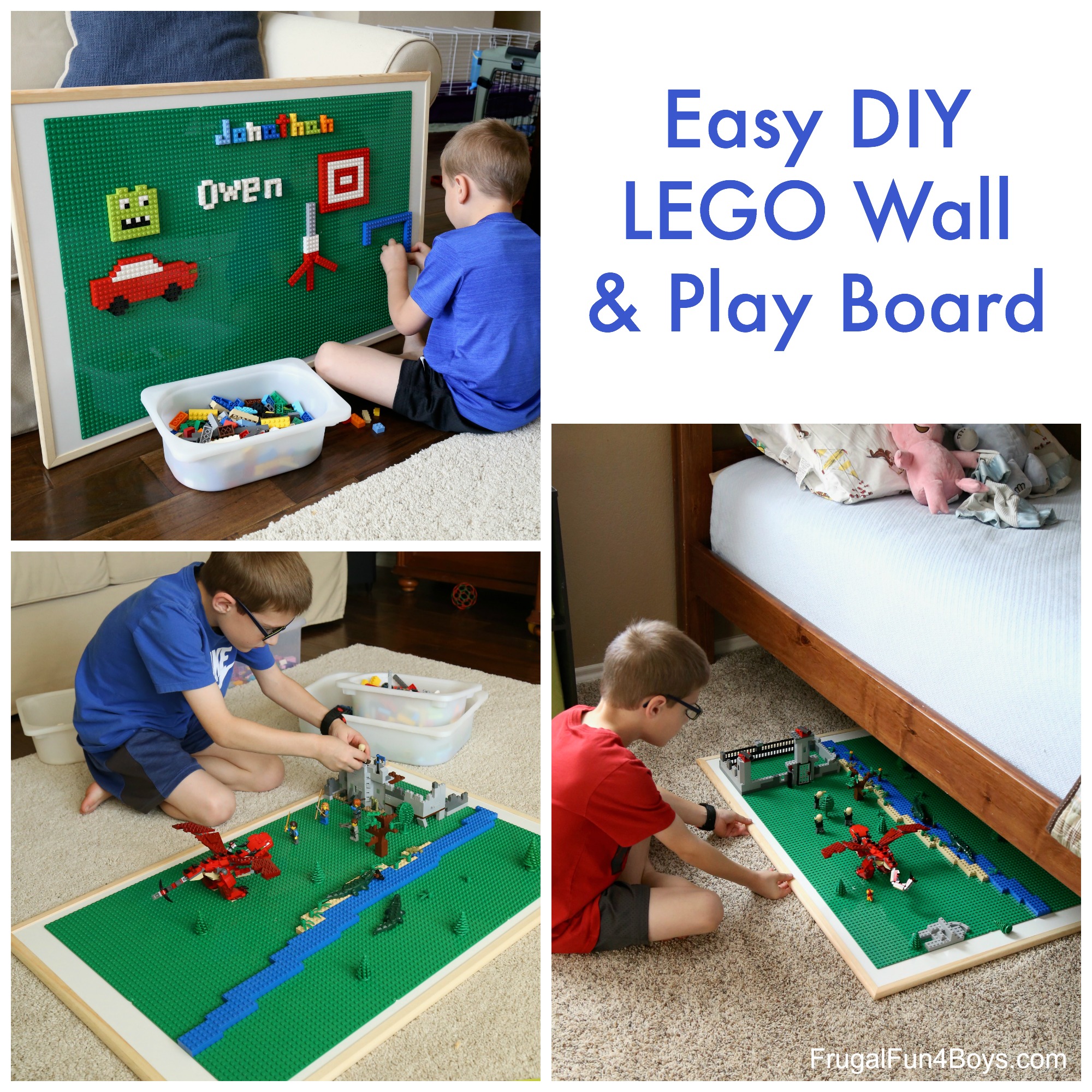 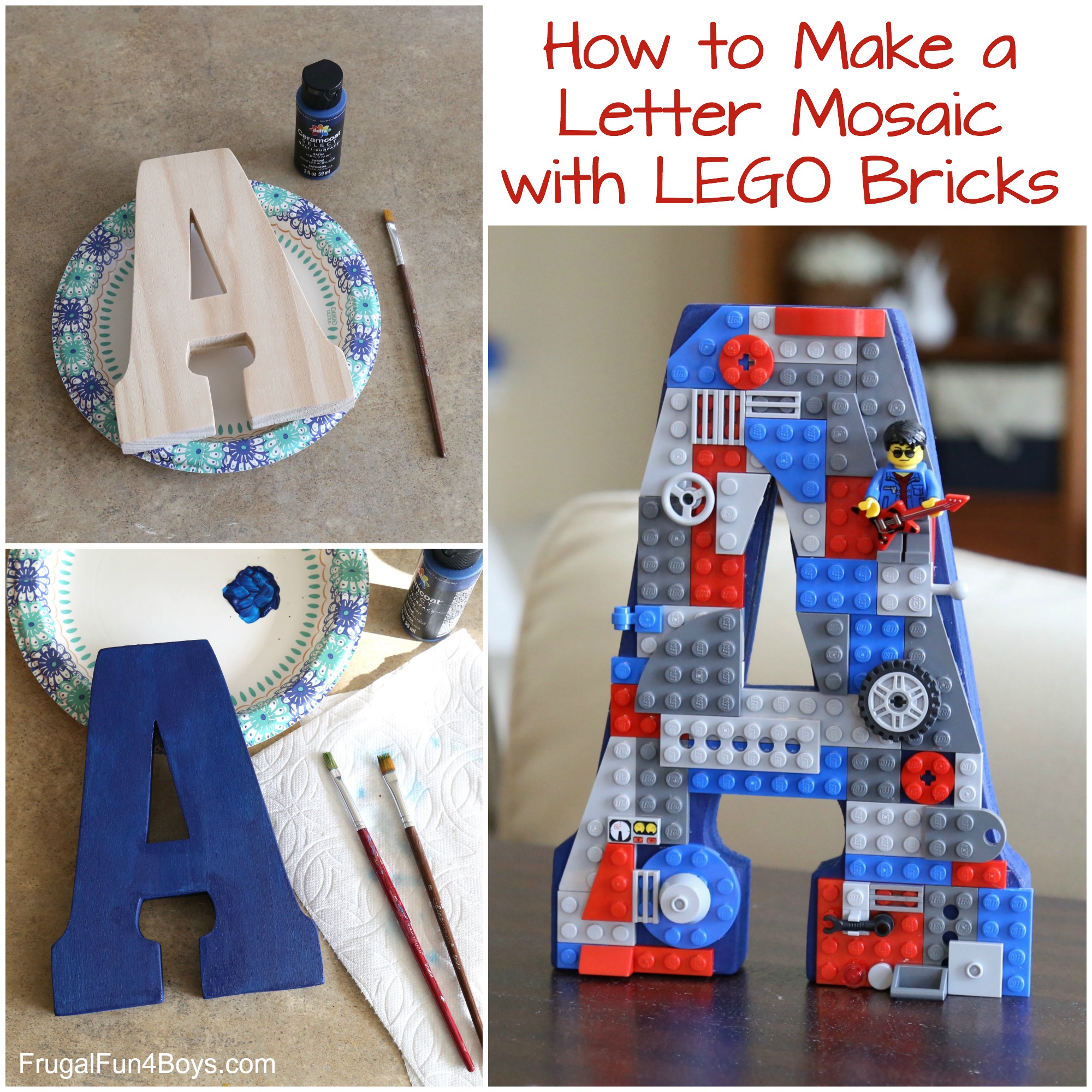