I thought while I was writing up this week’s Lego Fun Friday that I would also address how we are handling big boys with Legos (and other toys with teeny parts like Playmobil) while we have a baby in the house.

Jonathan is now 7.5 months old. He is not crawling yet, but he can roll and scoot wherever he wants to go! It’s really not practical to say that the big boys are just not going to play with toys with little parts, and so about a month ago, we started really cracking down on tiny toys left all over the house. And when I say all over, I mean all over. Lego guys on the kitchen table, Lego accessories in the carpet, minifigure heads in the couch cushions, playmobil swords on the stairs.

First I tried nagging. When nagging didn’t work, I decided we needed a system. My system is called the “Random Toy Box.” 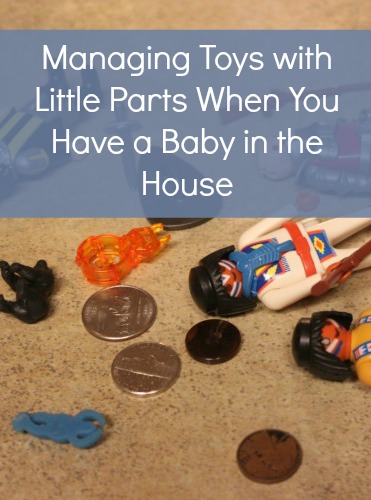 Here’s how it works:

If I find toys laying around not being played with (little dangerous ones), or toys left out after clean-up time is over, I simply pick them up and put them in the random toy box. It’s not actually a box. Downstairs, they go on the windowsill. Upstairs, they go on my dresser.

On Friday, all the toys are released from the random toy box and all the boys help put them where they belong. That means that if a toy is left out on Saturday, they can’t have it back until Friday. It has to be painful enough that they have some motivation to keep things put where they belong, but at the same time, having a system helps me to not respond in anger and take toys away for an amount of time directly related to how mad I am.

So far, I am happy with how it is working. Just today, Aidan was trying to talk me into having his Playmobil rifle back early (the tan one in the picture up there!) because he didn’t leave it out – it was Owen’s fault. He had left it on the kitchen island, not the floor. Grandma was over at the time, and she commented that maybe his little toys shouldn’t be left on the island. Bingo! During this stage, the boys have to play with those things up in their rooms or at the table and then put them away. Jonathan’s life is worth taking the extra effort!

For those of you with big kids and little kids – how do you handle the tiny toys at your house?