If you missed part 1 and 2 of our reflux saga and have interest in reading them, you can find them here and here.

I mentioned last time that we had to feed Owen his bottles in his sleep (for some of his feedings) in order to get enough food in him for him to grow. In March of 2010, we were getting to the point where Owen was now 10 months old, and I knew that we couldn’t keep up this sleep feeding thing for much longer.  We were worried about what we would do when it was no longer possible to feed him while drowsy because his appetite was still lagging…  I called our feeding specialist, and she suggested that we see a dietician to help evaluate whether Owen needed us to really push calories on him or not.  She had a dietician in mind.  While I was on the phone, I texted my friend Lori who is an occupational therapist. I knew that Lori had a dietician in mind as well that she knew was good, and I wanted to find out who it was.  At this point, we were interested in doing whatever it took to make sure we were getting the highest quality help for Owen!  Lori texted back, and the dietician she was recommending was the same one that our feeding specialist was recommending!  It was such a comfort to see God’s hand in our circumstances!

We were apprehensive about the dietician coming to our house – would this be a lesson in the four food groups?  (Oh wait, I guess that’s outdated… the “food guide pyramid?”)  Was she just going to tell us how many servings of what Owen should have?  He was refusing to eat solid food, and so we felt like it was neither here nor there how many servings he should have if we couldn’t make him swallow it!

The dietician came, and she was wonderful!  She weighed and measured Owen and found that Owen was in the 1st percentile for weight, the 8th percentile for height, and the 3rd percentile for head size.  We knew his weight was low, but his pediatrician had been measuring his height in the 40-50th percentile (with the marking on paper method).  The dietician had a special tool for measuring height that was more accurate.  The height was the most concerning to us because our other boys have always been in the 50th percentile+ for height.  Maybe Owen will just be shorter (there are several short people in my family including me), but it was also possible that he was just not getting enough nutrition.

The dietician suggested trying a couple of formulas – Alimentum and Neocate.  I had been hesitant to try switching formulas because it has always been so hard to figure out what is affecting Owen, but she said we’d know in three bottles if one was going to work.  So we tried it.  On bottle #3 of Alimentum, Owen cried for the bottle (because he wanted it).  He never did that.  He also drank 5 oz. at one time, which was a record for him!  It was clear that the Alimentum was helping him, which meant that he is intolerant of dairy.  (He later tested negative for dairy allergy.) Switching to Alimentum felt like a step in the right direction, and also made the end of pumping and feeding him breastmilk less sad.

In April, we took Owen to a pediatric gastroenterologist.  We didn’t really expect him to find anything new, but also figured it was worth it to rule out anything we might be overlooking.

The pediatric GI doctor wanted us to do an EGD – a test under general anesthesia where they would do a scope of Owen’s esophagus, stomach, and intestines to look for damage caused by reflux or food allergies.  They also biopsied his stomach and intestines.  Then, we would do a 24 hour pH probe test (a tube down his nose) to measure acid levels at the base of his esophagus.

Here is Owen getting ready for his procedure! 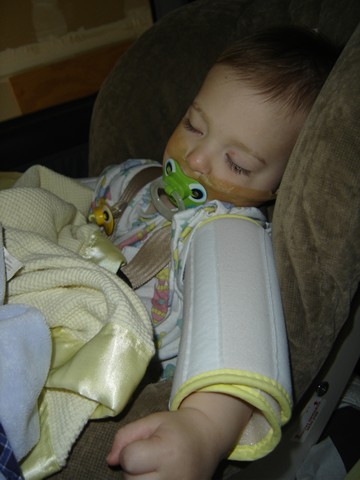 And Owen on the way home…

The pH probe was MISERABLE  for everyone involved!  The things on his arms were supposed to keep him from pulling the tube out of his nose.  They worked great, as long as we kept them on.  But he couldn’t crawl or play with them on, so we ended up taking them off, and… you guessed it – he pulled out the probe!  To make a long story short, we ended up going back to the hospital twice to reinsert the probe and fix the reader box connected to it.  Owen was miserable and whined almost the whole time.

The testing was worth it, though, because we found out that he was still refluxing.  We were assured that he still needed to be on medicine.  Also, the biopsy showed that he had gastritis – an inflammation of the stomach lining.  We still don’t know what caused that, exactly.  Maybe being on dairy which he couldn’t digest well (both from dairy in my diet and from the supplemental formula).  Owen took Nexium for 8 weeks to heal the gastritis.  We started seeing an improvement in his eating right away!

There have been times that I have been tempted to think, “If only I had eliminated dairy from the beginning when I was nursing… If only I had put him on reflux medicine sooner…” but God does not expect us to be omniscient.  We did what we knew to do at the time.  And God is good in allowing us to have the information that He wants us to have at the time that we have it!

One big hurdle has been the cost of Owen’s formula.  We are spending about $300 a month.  (Still… at 18 months old…)  But God has been so faithful to provide the income we need to cover our expenses.  We have also been given formula coupons and samples at some very opportune times.  Just last week, our dietician brought us $50 in formula that someone had donated.

Next time… (which will maybe the last installment of this story)  we’ll talk about switching to solid food!  No easy task at our house!