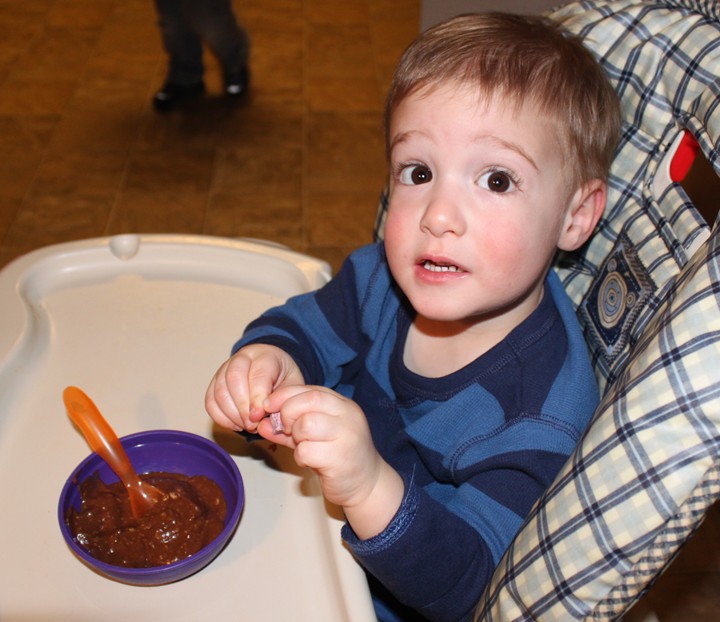 Owen not trying his homemade chocolate pudding… dairy free – made with avocados! It didn’t turn out very well, but we’ll post the recipe once we get it right!

It’s been a while since our last reflux update! Owen has definitely made some progress in the past month! We had a rough patch health-wise from mid-January to mid-February. During that time, Owen had the flu, an ear infection, a stomach virus, and the recurrence of an ear infection. Every time that Owen is sick, even if it’s just a minor cold, his eating takes a big hit. I have noticed, though, that he is bouncing back to normal eating more quickly after an illness – we are not losing as much ground as we used to!

We are trying for a second time to taper off his reflux medicine (axid), and it seems to be working this time! We are on day 9 of skipping the middle dose of his three daily doses, and he is doing okay!

We also had two other milestones this month: Owen feeding himself with a fork (and once he even fed himself a whole pancake!) and Owen consuming more calories in a day from solid food than formula (only happened once, but still, it’s the first time in his life!). Overall, he seems much less resistant to “big boy” food, although his meal sizes and overall calorie intake are still low.

My biggest struggle/trial/frustration/whatever you want to call it is that it still takes SO long to feed Owen. He still drinks 5 bottles a day, and they can take 20 min. or more. He holds him own bottle, but can’t be trusted with it alone because if he is not hungry (which is often), he’ll spill it on purpose. He refuses to drink formula out of a sippy cup. If we give it to him in a cup, he spits it out. Owen is eating more solid food (bananas, avocado, crackers, english muffins, raisins, cereal, meatloaf, green beans), but he often has to be coaxed into eating a reasonable amount. Sometimes I’d love to be able to just hand him a plate and have him feed himself, and then hear him ask for more instead of begging to be done!

A friend from church loaned me a book about feeding therapy, and it was interesting to read! The book talked about resistant eaters (which I would say Owen definitely is), but it was interesting to me how much Owen does not fit the profile! Most resistant eaters are VERY hesitant to try new foods. They have their little repertoire, and they stick to it. Owen doesn’t mind trying new foods. He’ll try almost anything. He is just as likely to refuse familiar foods as he is to refuse new foods, which makes me think that his issue is not so much an aversion to eating as it is simply GI issues and an over-active gag reflex. And, hopefully he’ll outgrow those.

ECI (early childhood intervention) came out yesterday to do a speech evaluation for Owen. He is 21 months, and says about 10 words, and so his pediatrician wanted us to get him checked out. He did not qualify for speech therapy, which is good, I think! He is within the normal range, because toddlers his age should say at least 10-20 words. However, at age 2, he should have a vocabulary of at least 50 words and be putting 2 words together. It will be interesting to see if he is doing that in another 2 1/2 months at his birthday. He scored above average on every area except expressive language. We know he’s smart, and we know he understands us. The words will come soon! His speech delays may be related to his lack of eating – he has not used his tongue/mouth as much as other kids who started eating solid foods earlier and who ate more of them!

Owen did not say ONE WORD the whole time the ECI therapists were there! Not one! I even tried giving him a phone that is normally off-limits to see if he would say “hello” – his cutest word! He says it “wo-wo” in a very deep voice. When they were done, we walked them to the door. As soon as the door shut, Owen said, “Ball!” What a stinker…

The ECI people thought it might be a good idea to have an occupational therapist come out and evaluate Owen’s sensory issues (eating crayons, chewing on cardboard, dumping out every cup of water that he can get his little hands on). We haven’t decided if we’ll do that or not.

Owen remains the most affectionate and sweet of the boys, and he is absolutely adorable. Toddlers are so fun to have around. Well, most of the time. 🙂 Reminding myself of God’s grace to respond the right way in the daily grind of feeding him…