The other day, I was rocking my 7 month old son in his new room in our new house, and I started thinking…

God’s grace to us has been pretty amazing.

In January 2011, Jordan and I were talking about where we wanted to be long term. I told him that what I really wanted was to quit my teaching job (I was working two afternoons per week teaching strings at a private school), have baby #4, and move to a bigger house.

But all of that seemed impossible. We couldn’t afford a bigger house unless I kept teaching, and I couldn’t imagine keeping up with four children while also working outside the home. I loved teaching, but I was spread so thin already. If I quit my job and we stayed in our current house but had another baby, it would be pretty cramped. Not impossible, but cramped.

So our only option was to pray.

A couple weeks later, Jordan’s company changed their pay structure. His job is a base salary plus commission, and the change meant that he would be able to make significantly more money, which eliminated the need for my salary.

In April, Jordan heard rumors at work that the center where he was employed was going to be closed. If it closed, approximately 200 people would lose their jobs. Before it was official that it was closing, the company posted job openings at another office. We had to decide whether he should go for one of those openings. It was a tough decision because he liked his current job, and we weren’t sure if he would want to move positions if the center didn’t close.

In the middle of this, on May 9, I had a dentist appointment. I thought that before I had x-rays, I should just make sure I wasn’t pregnant. Well, as it turns out… we were expecting baby #4! It was wild. I had to tell the hygienist that I didn’t want x-rays, but I told her to not say anything as my mom was with us and I didn’t really want to share the good news at the dentist’s office!

Later in May, Jordan interviewed for the new position. There were 7 openings, and he didn’t know how many people were interviewing. He interviewed on a Thursday, and found out Monday that he was not accepted for the position. We knew that if they closed the center, he would be out of work. And now I had quit my job and we had a new baby on the way! We had to trust that God does not expect us to know the future – we had to make the decision about my job with the information we had at the time. We had to keep reminding ourselves that God was not simply “out to get us”! On Thursday of the same week, they announced that they had decided to accept two more people for the new positions, and Jordan got the job! He was notified Friday, and started on Monday. We spent the weekend shopping for a more professional wardrobe as this was a promotion!

Seven days later, the announcement came that they were closing the center! 200 employees lost their jobs. Jordan was one of 9 who stayed.

All glory to God!

In July, Jordan’s car died. It was one of those deals where to fix it would cost far more than the car was worth. We decided that the wisest course of action would be to pay off our van out of our savings and finance a car for Jordan because we didn’t have enough in savings to buy him something decent with cash and we didn’t want to have two car payments. The payment on his new (used) car was much less than what we had been paying on our van!

Jordan worked at his new position from late May to September, and then was promoted again to an outside sales position with a car allowance that exactly covered the car payment for his car!

Sometime in July, I believe, I answered the door to find a FedEx envelope on the front porch. It was a settlement check from a lawsuit at Jordan’s work that we didn’t even know was happening. Apparently, they had made many errors on Jordan’s commission checks (which we did know about but figured we would never see that money), and as part of the settlement, they sent us that money – doubled! It was about $3,000. The amount of this check covered Aidan’s diagnosis of kidney reflux in August and surgery in September. Not so fun to spend it all on medical bills, but praise the Lord that we had the money! 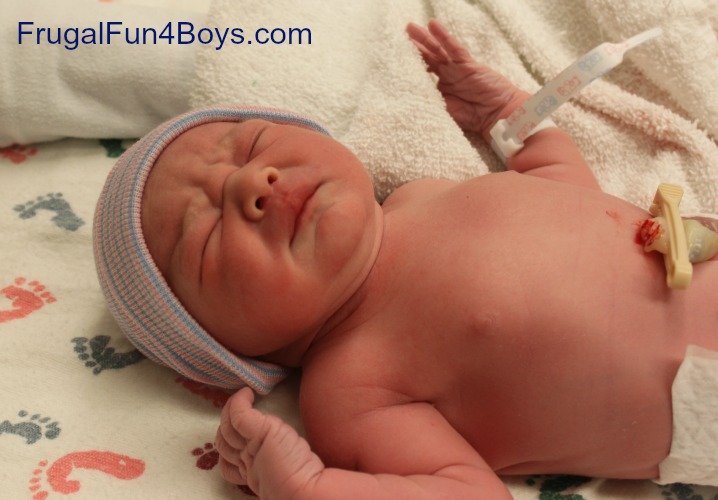 When Jonathan was two weeks old, our realtor called and announced that it was a good time to consider selling our house. (This was not a sales pitch – our realtors are a husband and wife team that attend our church, and both Jordan and I have worked for them in the past! They were watching the market for us to find a time that we could afford to move!)

And we decided to go for it! We fixed up the house, and put it on the market in March.

For the next amazing part of this story, I have to back up a little. Back in October, I had talked to friends about their house that was for sale by owner. We were interested in the house. They ended up having to list with an agent because of a job transfer, but they wrote us into the contract to be able to purchase from them without the realtor commission. At the time, I figured it was a total longshot.

Well, their house was still on the market when we sold in May! We were able to buy the house for a price that was mutually beneficial for both families. We were so happy to buy, and they were so happy to finally sell! And this home is absolutely perfect for our family, even if we do have a large snake that comes around every now and then. (And an armadillo that almost got in the house! But that’s another story…)

It is so good to look back and see God’s hand.

While all this was happening, God did not reveal to us the end of the story! There were times that it was hard to trust. And yet, looking back, He provided all three of the things that we asked for in January 2011. Pretty amazing, considering that we don’t deserve any of it.

My husband and I wrote this post together, and it was such a beneficial activity for us! He remembered details that I had forgotten (probably out of self-defense because it was so stressful at the time!). I highly recommend taking some time to remember God’s grace in your own family. Be intentional to remember the times that God brought circumstances together that were totally beyond your control. Looking back helped me to lay some current struggles at the feet of our Lord because His provision is so awesome. And I’d love to hear some of the ways that God has worked in your families if you want to share!

Linked to Gratituesday at Heavenly Homemakers