This fun simple science experiment that is perfect for winter time! This experiment demonstrates how snowshoes keep people from sinking into the snow, and why animals that live in snowy regions have large paws.

The other day, we were reading about lynxes in our science book – Exploring Creation with Zoology 3:  Land Animals of the Sixth Day from Apologia.  We were learning that the Canada lynx, which lives in the colder parts of North America, has large furry paws that make it easier to walk on the snow.

Well, we live in North Texas.  Walking on the snow is a foreign concept to us! IF we get snow (we’re much more likely to get sleet or freezing rain), it might be an inch or so. People here don’t own snow shovels, let alone snowshoes!

I came up with this activity to demonstrate how snowshoes work and why the lynx would need wide paws.  It was totally spur-of-the-moment, and thankfully, it actually worked! We’ll be substituting flour for snow in this experiment, and I think you’ll find that it’s an effective science experiment for kids. 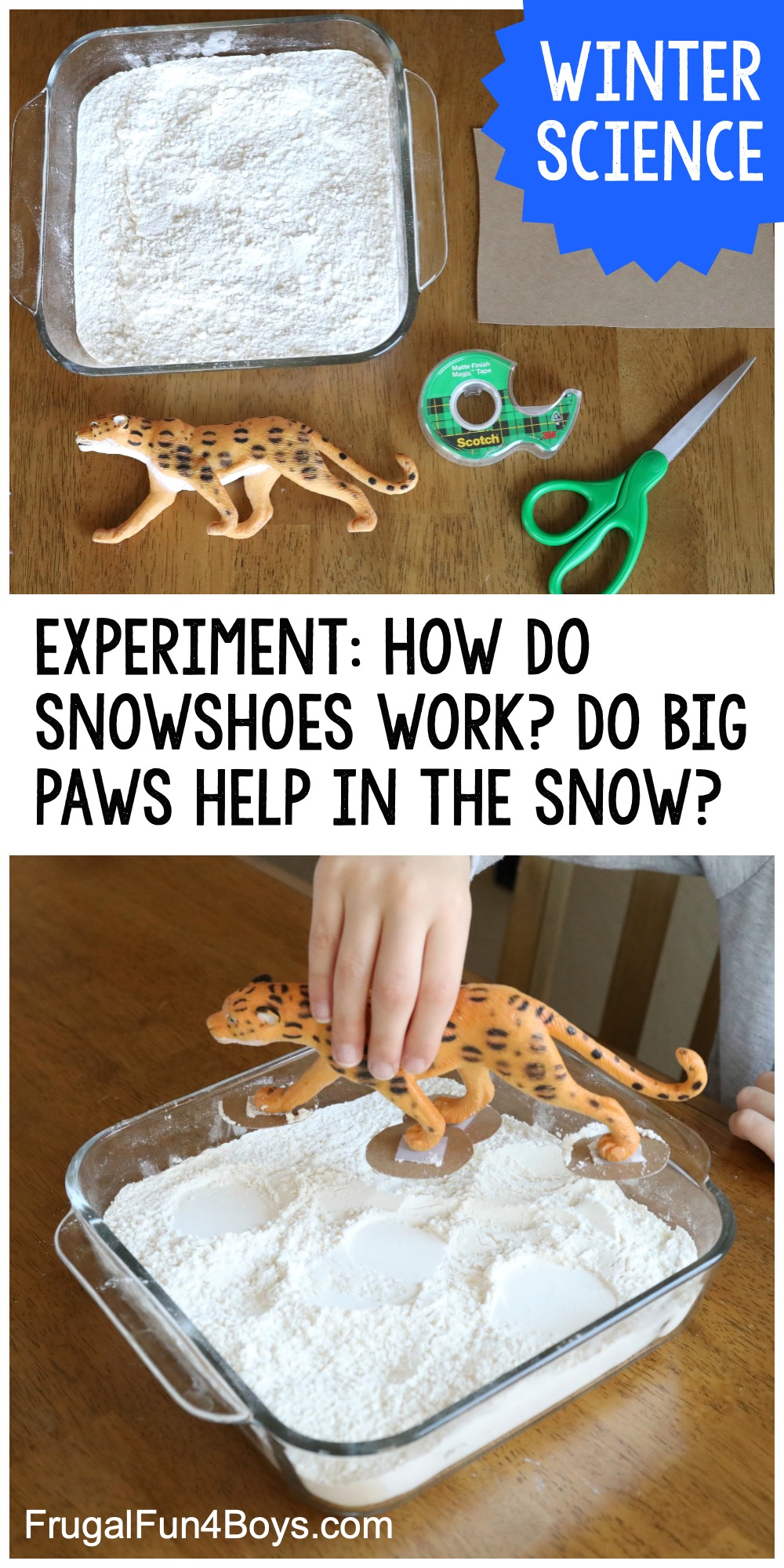 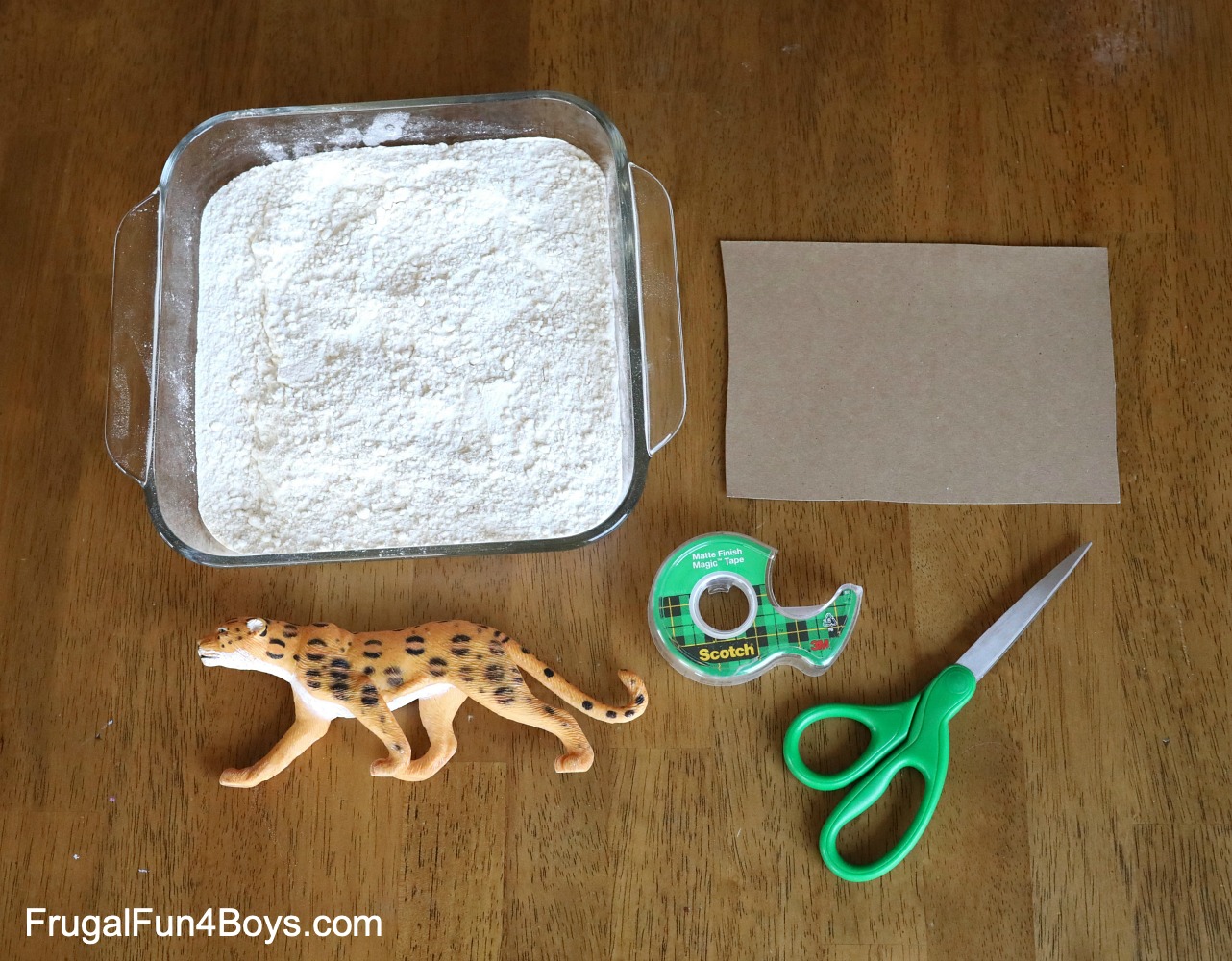 Step 1: Fill a shallow dish with an inch or two of flour. Pour the flour in, but be careful not to pack it down. Then, place your animal in the “snow” (flour) to see how deep his footprints will be. Don’t push the animal down. Just set it in the snow. 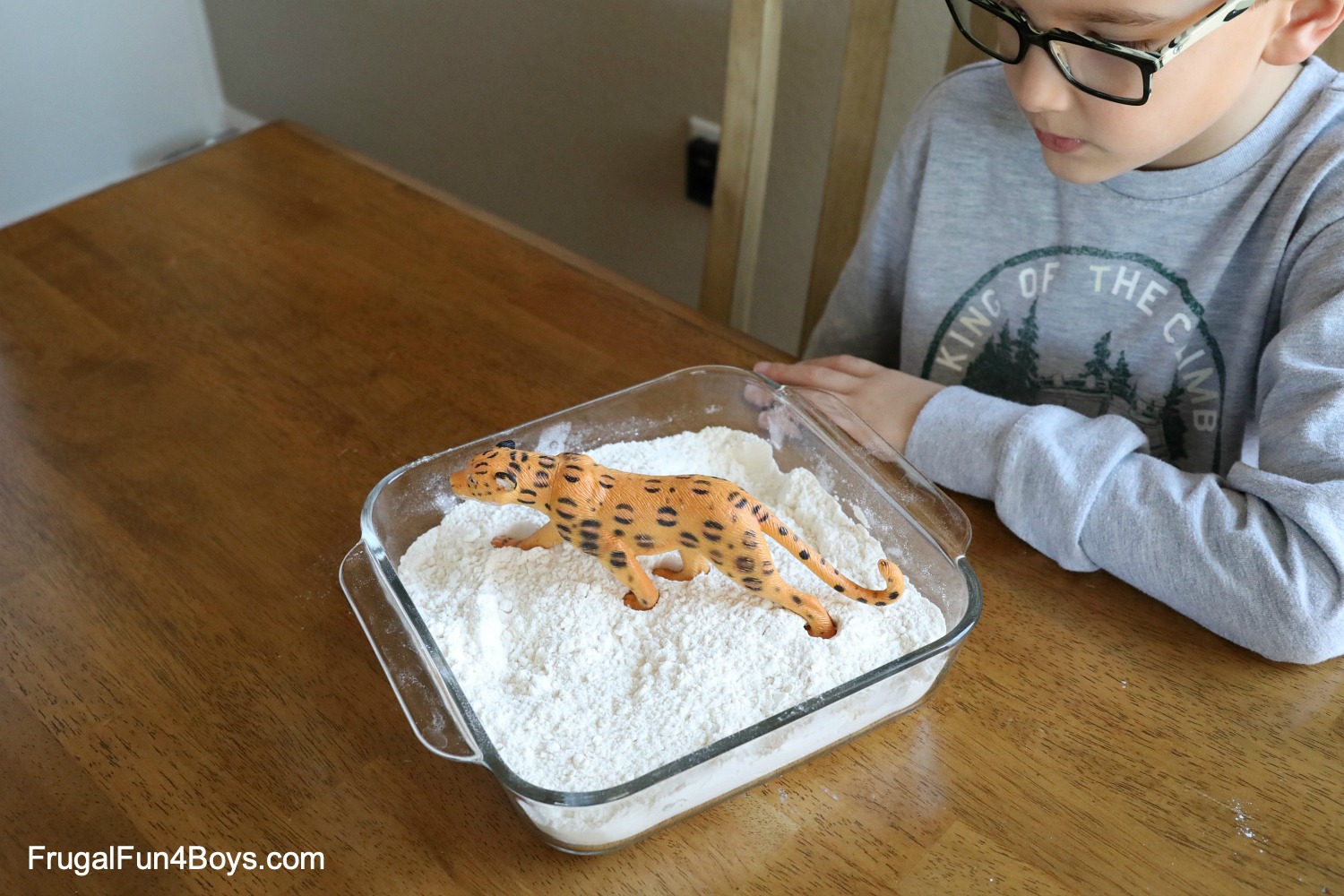 Hmm, those footprints are pretty deep. 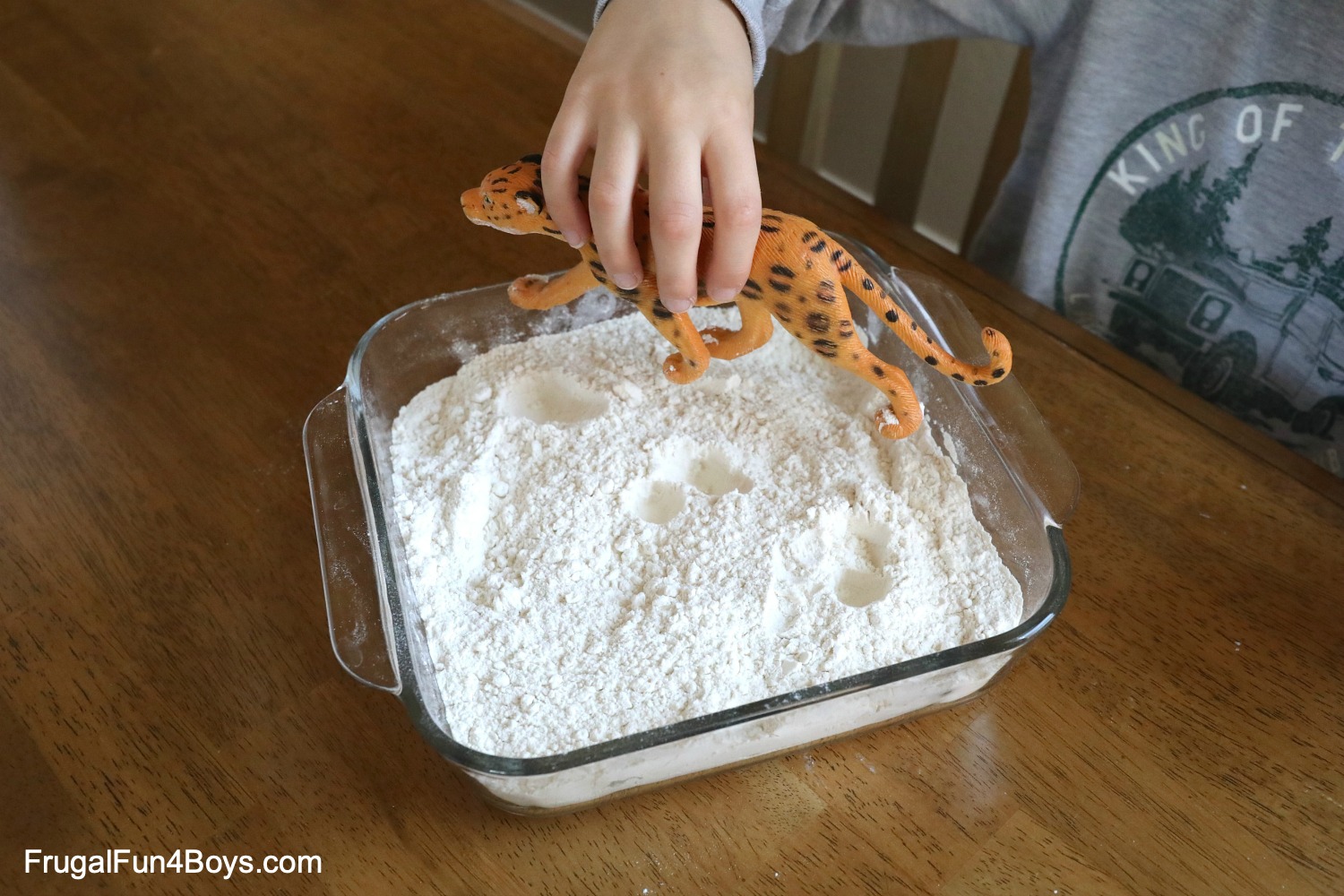 Step 2: Now it’s time to make your plastic animal some snowshoes. Cut out a cardboard circle to go under each paw. Make them quite a bit larger than the animal’s paws. Attach each “snowshoe” to a paw with a loop of clear tape. 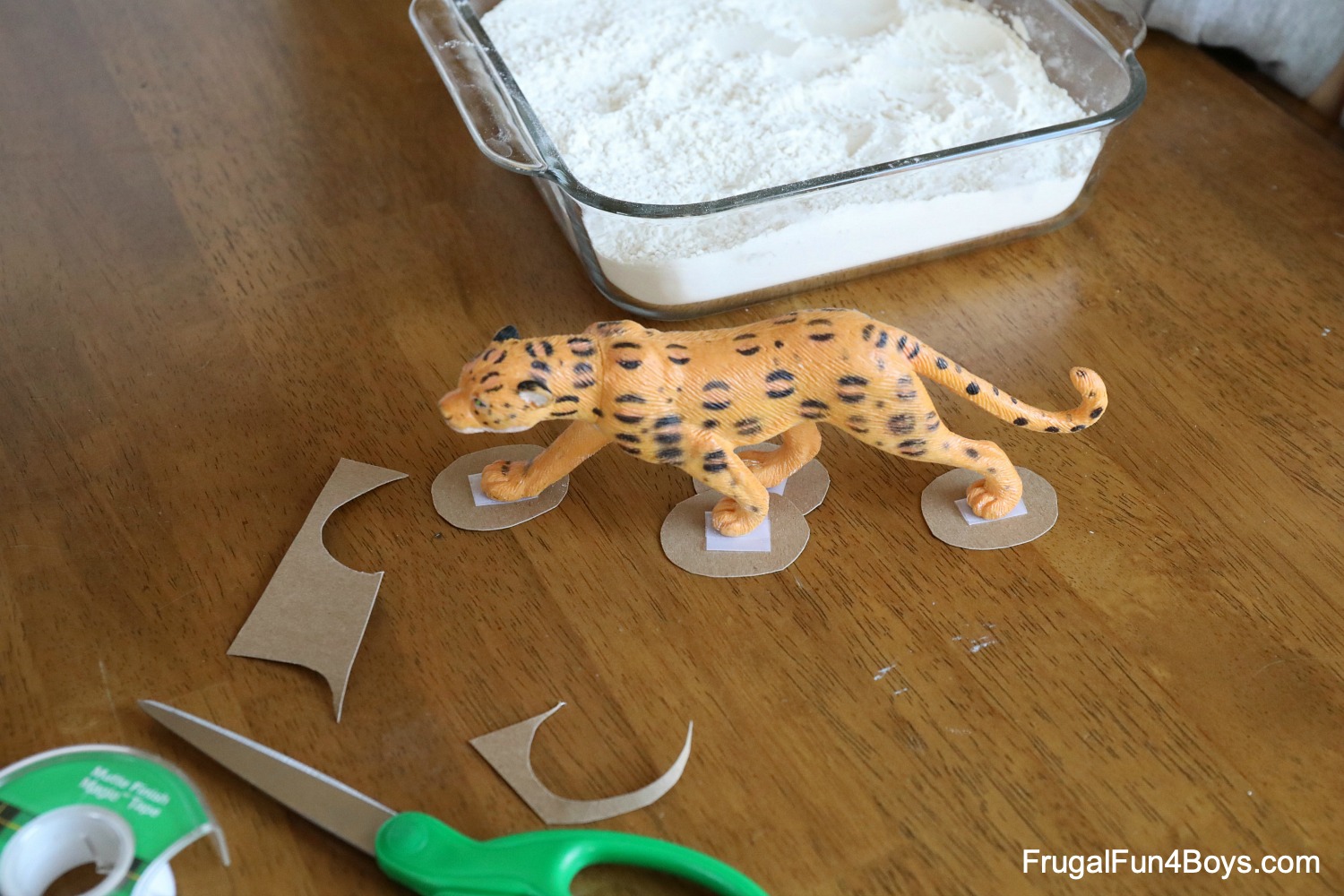 Step 3: Then it’s time to see what effect the snowshoes have on how much the animal sinks down into the snow. Use a spoon to stir the flour and fluff it back up the way it was at the beginning. Then place your animal in the flour again, with his snowshoes on this time. 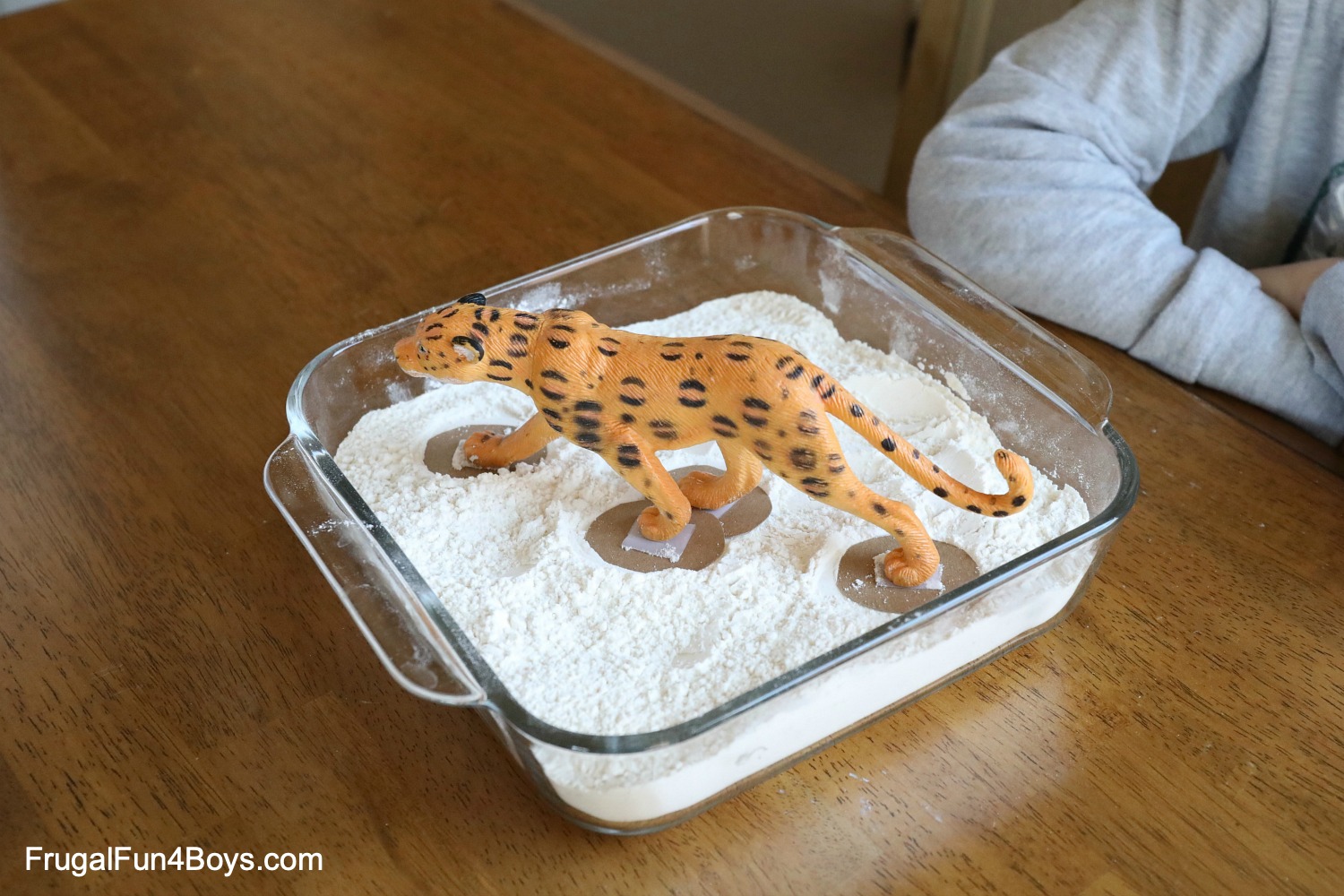 It’s amazing how much difference the snowshoes make! Your animal should not sink into the snow much at all. 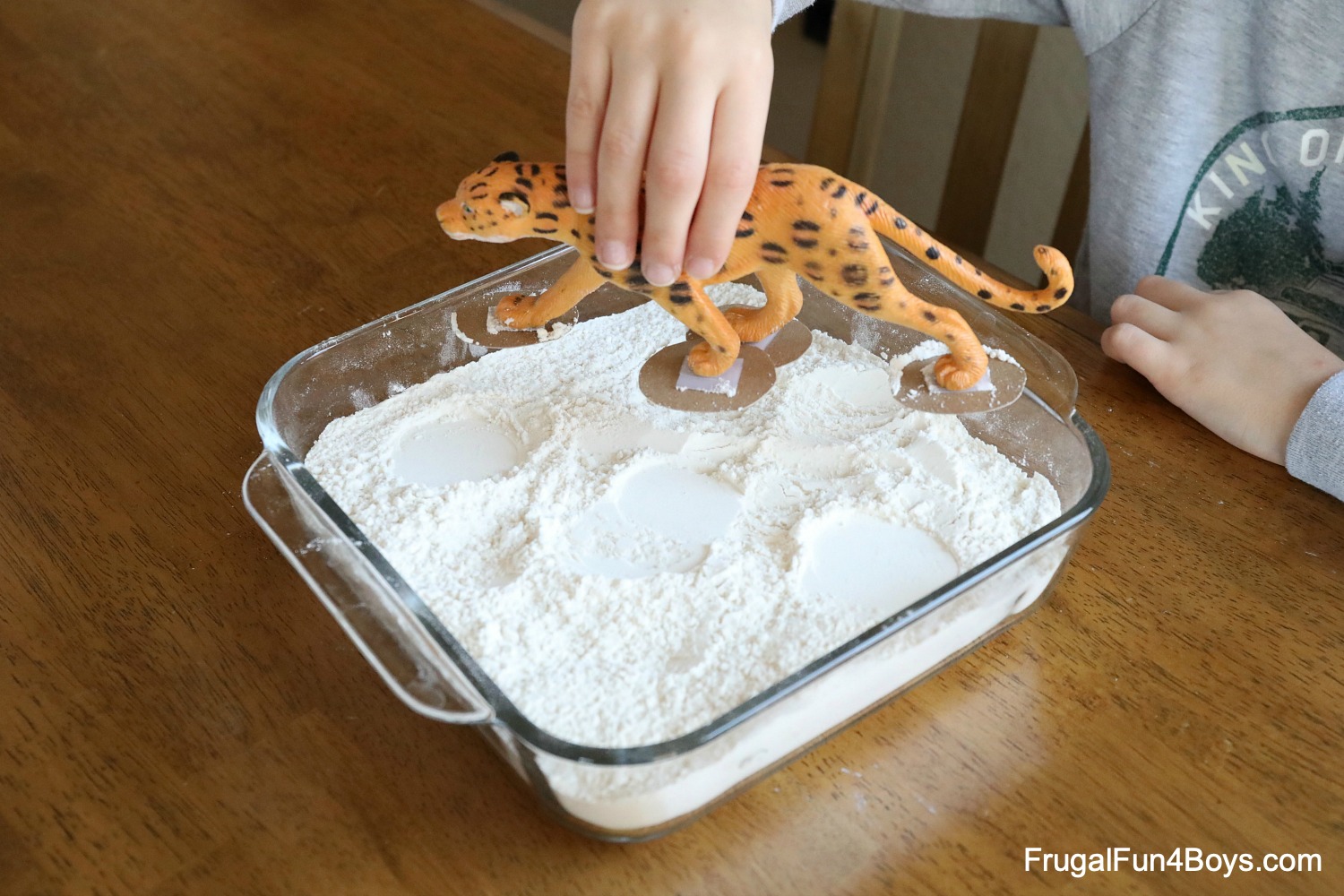 It’s very interesting to try pushing down on the toy animal with his snowshoes on. Even if you push, you can’t really get him to sink down very far. There is obvious resistance when you try to push him into the “snow.” 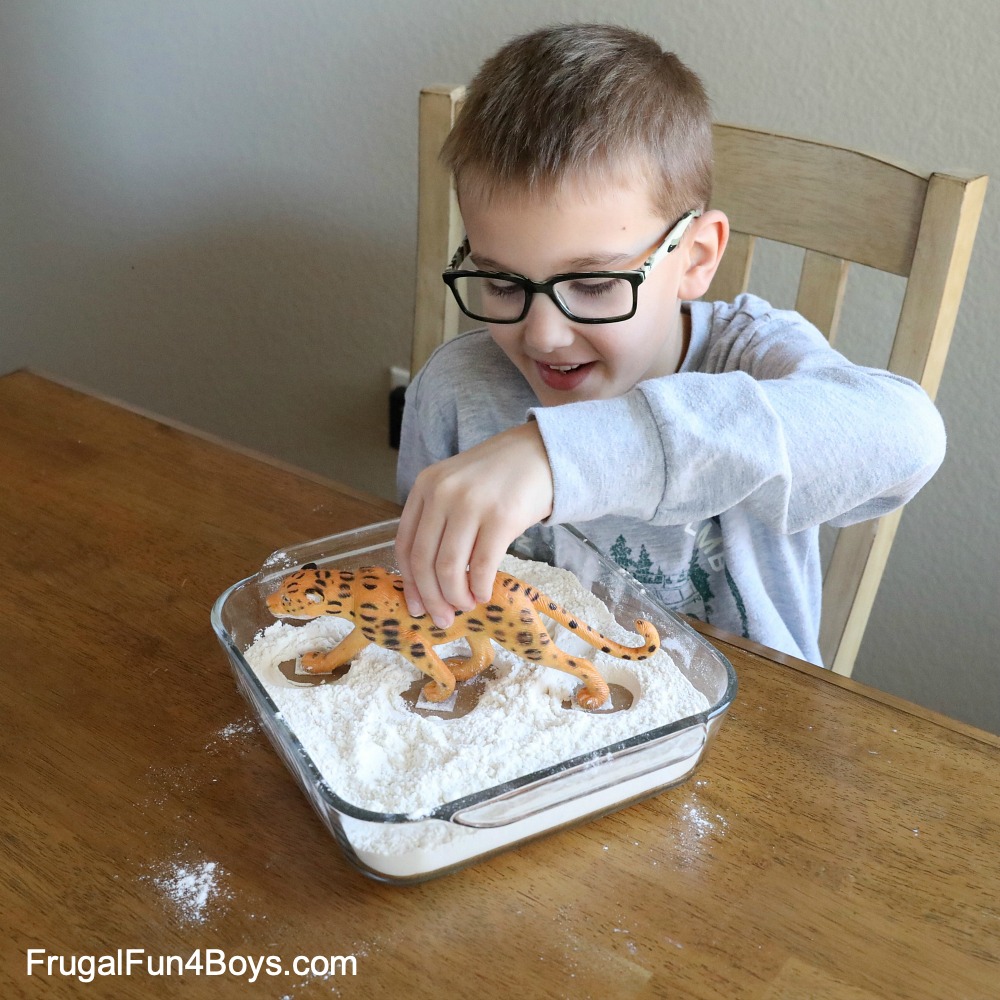 Why does this snowshoe science experiment work?

If you’ve ever tried to walk through deep powdery snow, you know that it requires a LOT of energy to keep lifting your feet out of the snow! If the snow is deep enough, it can be dangerous. Snowshoes keep you from sinking into the snow with each step by spreading your body weight out across a larger surface area. With the weight distributed across a larger area, the snow is able to hold you up. Your body puts less mass per square inch on the snow. You’re still the same mass, of course, but it’s spread out over more square inches.

Animals such as the Canada Lynx benefit from wide paws that distribute their weight over the snow just like man-made snowshoes do!

This article was originally posted in August 2012, and updated and expanded in December 2019. 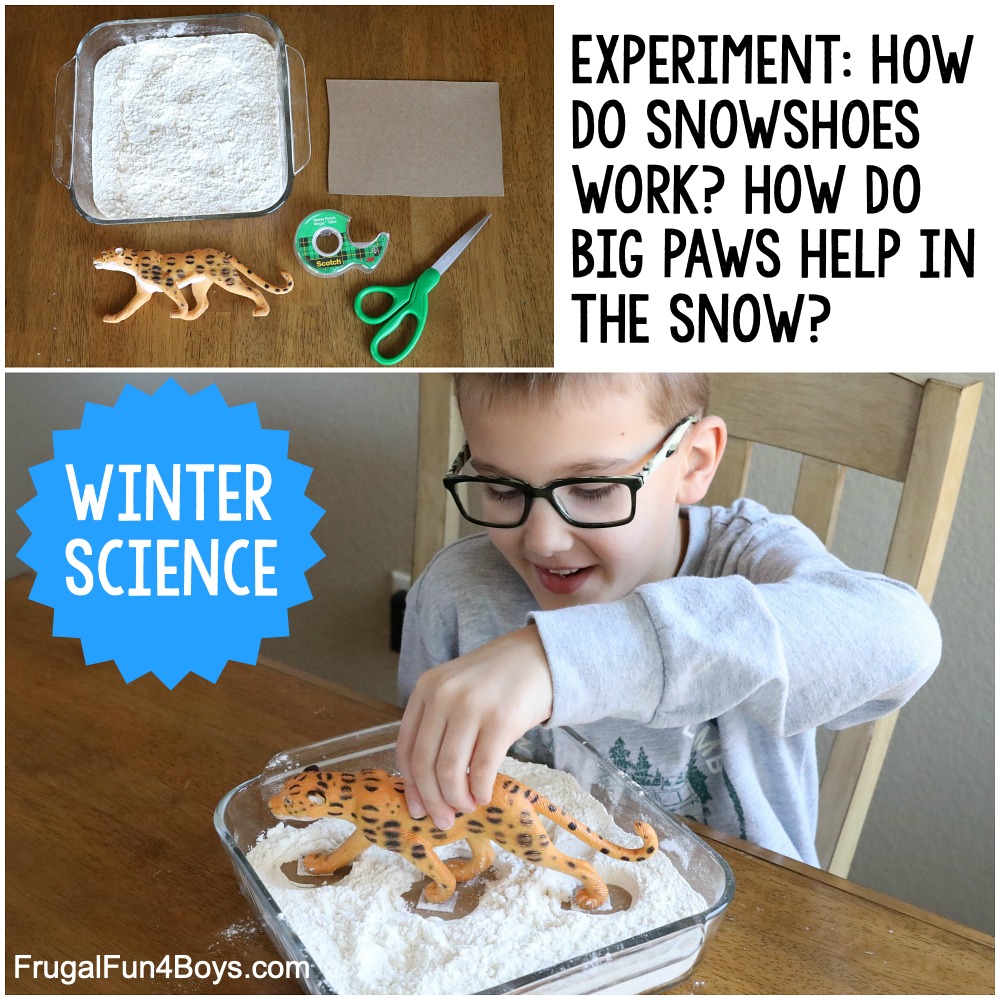