Last night I arrived home from the grocery store and was chatting with my next-door neighbor while the boys carried in the groceries. Owen (age 5) grabbed a bag of groceries and immediately dropped it on the garage floor, breaking the glass jar of spaghetti sauce inside. I told the boys to leave the bag and Daddy or I would pick it up in a minute.

My neighbor said, “You just stay so calm!”

I assured her that I am definitely not always calm with the boys and their messes! With this particular mess I was calm because… 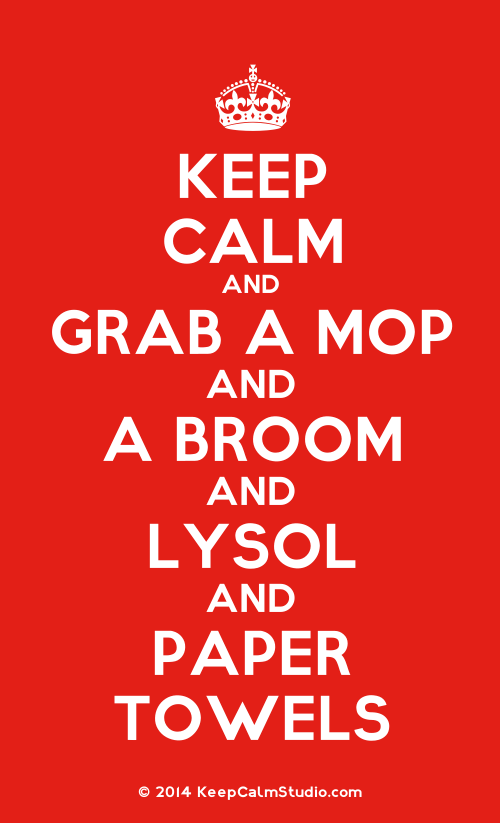 The last time the boys broke a jar of spaghetti sauce, it was my oldest son carrying the grocery bag “Santa Clause style” over his shoulder, and the bag broke and the jar hit the garage floor. This time, the mess was contained in the bag with only a few drips to wipe up. That time, we had an entire jar of sauce and broken glass to scrub off the garage floor!

We also had “worse” happen yesterday afternoon. Jonathan woke up from his nap and came out of his room with his hand in his diaper. Aidan saw him and told him to take his hand out. Jonathan said “No!” So Aidan pulled out his hand and discovered that it was covered in poop. In fact, based on how wrinkled his hand was (as in, wrinkled from moisture), I think he had slept with it in his diaper for his entire nap time. “Gross” would be an understatement here! I was so thankful that Daddy was home. We washed Jonathan’s hand, and when that didn’t even touch the smell, we scrubbed his hand with rubbing alcohol and then put him in the shower.

Incidentally, this was not the first poop mess of the week. On Thursday, I was attached to my pump (baby won’t nurse…) and Gresham announced to me that Jonathan had taken off his own poopy diaper in the bathroom and was trying to use toilet paper to clean his bottom. (We’ve started potty training – maybe that was a mistake!) He came out of the bathroom with toilet paper stuck to his bottom. But it wasn’t stuck there for long because the dog pulled it off and ate it…

There was nothing I could do until I was finished pumping, so I had Jonathan stand in the kitchen by me until we could deal with the mess! (And a BIG thank you to Aidan who cleaned the bathroom!)

Yes, my hands are full. Overflowing, even! But no matter how crazy things get…

2. There is nothing good that comes from getting angry about a mess.

Sometimes this point makes more sense when you see it in someone else.

Several weeks ago, we were shopping for groceries, and Jonathan knocked over a cardboard display that held boxes of tea bags. A store employee was standing nearby when it happened. She said “Oh goodness!” in an exasperated tone and sighed loudly as she picked up the tea boxes. It took less than 3 minutes to pick up the 8 or so boxes, but she was sure to let us know how inconvenient this was for her! (I didn’t actually see it happen, so I don’t know if it was an accident or not. If Jonathan was older – he’s 2 – I would have asked him to help pick up.)

Unfortunately, I could see myself in her response. How often do I get angry and frustrated about a mess that is just a part of childhood when in reality it takes only a few minutes out of my day to fix it?

Being angry never solves anything. I do believe in teaching children to take responsibility for their messes whether they are accidental or on purpose, but that teaching will fall on deaf ears if done in anger. It’s so much better to say, “Here, let’s work together to clean this up. I’m not upset with you, but I want you to get a towel and let’s wipe up this spill together.”

Messes are just a normal part of life with kids. I was talking to a good friend the other day who shared a story about one of her children spilling two milkshakes on two different car seats… all in the same evening!

The next day, I texted her about the poopy diaper mess and got back this message:

“Oh Sarah, thank you for sharing. I’m sorry for the mess, and I wish I didn’t make everything about me, but this helps me feel like maybe we are normal and not “Adams family” crazy or something like that…”

Sometimes it REALLY helps to know that we are not the only ones who have crazy things happen. It’s really not just my kids who do these things! Moms, we are all in this together!

Living with a 2 year old is like living with an insane person. They’re adorable, but insane. I mean – who takes a nap with their hand in their poopy diaper? A crazy person. Or who dumps out all the shavings from the pencil sharpener onto the carpet every time he gets a chance? Or fills the dog’s water bowl to overflowing? Or rips a styrofoam cup to shreds? Or takes every item out of his dresser in an attempt to find what he wants to wear?

I have FIVE children. And yet I often get up in the morning expecting the day run smoothly and to be mess-free, and it never is! I am working on setting my expectations at a realistic level, realizing that much of my day is going to be spent in damage control. And that’s fine. It won’t always be this way. Someday they’ll be grown and on their own.

…And when I’m really old and falling apart and spill my drinks with my trembling hands, I’ll go live with them!