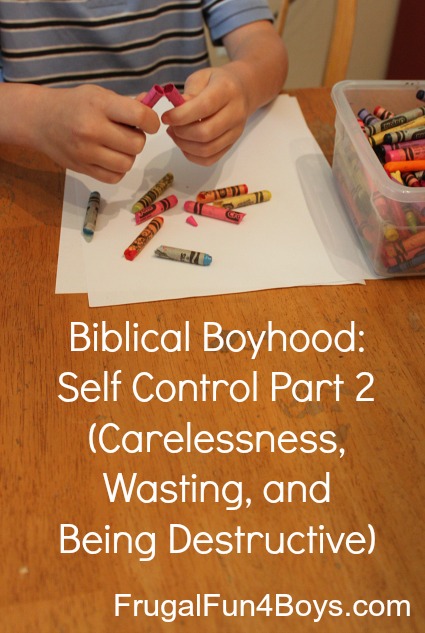 At the end of August, I wrote a post on teaching children, especially boys, about self control. The focus of that post was childish behavior vs. foolish (sinful) behavior.

“I often address self-control with my two children in terms of “taking care of people and things.” We remind them to play in a way that they are care takers and not destroyers, just like Jesus was. Self-control obviously is a fruit with more far reaching implications, but at almost-3 and 4 1/2 this is the most present application. What a marvelous thing that Christ kept His head about Him and made judicious decisions for 30-some odd years so that He could take care of us!”

I thought that this comment was very helpful. We have always expected the boys to make things right when they break something (either accidentally or on purpose), but I hadn’t thought of talking to them about being care takers rather than destroyers and about how that relates to self-control.

One thing that I have noticed about boys is that in general, boys think it’s interesting or even funny when something breaks, whereas girls are more likely to cry or be sorry. This is obviously not always the case, but I have not yet had a boy who is naturally remorseful when something breaks. When I was little, I accidentally broke a ceiling light fixture with a ball. My mom said that I was burst into tears! Definitely not the case around here. I have a friend who has 5 girls, and she told me once about babysitting some boys and chuckling at the differences. They were watching a movie, and one of the boys (age 2 or 3) kicked over the bowl of popcorn just to see what would happen. He wasn’t trying to be bad – just investigating!

Obviously we don’t want our sons to grow up to be men who are wasteful, destructive, and careless, but how do you go about teaching that to someone who thinks destruction is funny?

1. Start with the Scripture.

What does the Bible say about destruction of property? Philippians 2:3-4 says that we are not to do anything out of selfishness and that we should treat others as more important than ourselves.

Selfishness, or doing what is enjoyable despite the cost it presents to others, can actually go a couple of different ways. Some children are more tempted by laziness, while others are more tempted to be wild and high-energy. The lazy child might be more prone to leave toys or shoes out to be ruined in the rain, while the high energy child puts a doorknob shaped hole in the wall while playing chase in the house (we’ve had this happen… ugh) or breaks a sibling’s toy while being silly with it. In either scenario, the child is being selfish by carelessly creating unnecessary work and expense for someone else.

Matthew 7:12 says that we are to treat others the way that we would like to be treated. It is a process for children to learn to see things from another person’s perspective, but it’s an important skill to learn!

So, instead of being careless, we should care for others. We should work to help them and take care of their things, not create extra work or expense for them.

2. Start at an early age requiring children to make things right when they ruin something, whether it is purposeful or accidental.

Making things right is just part of being a responsible person, and if you start young and keep your frustration out of it (that’s the hard part), children will view cleaning up or fixing something as just part of life.

We had this little incident in our house last week: 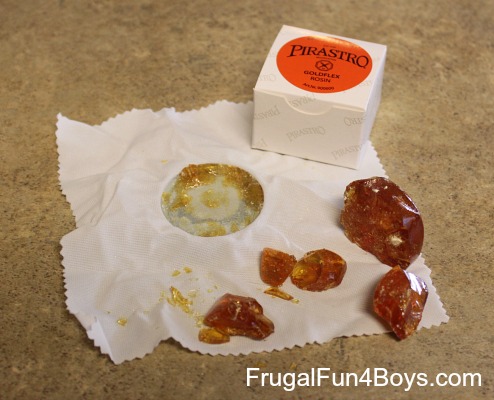 This is, well was, a violin rosin. I am a violinist, and I am teaching the older three boys violin. Last week, I discovered that someone had touched the rosin with very sticky fingers. Unfortunately, I didn’t notice this until after I rubbed it all over Gresham’s bow! We went to the music store and had the bow hair cleaned, and then I bought a new rosin for me (above) and a cheaper one for the boys to use so that they would not be handling mine anymore. Well, before I even used the new rosin, one of the boys opened the box to check it out, dropped it, and it shattered on our tile floor. It’s a house rule not to get into any violin things, and so Daddy decided that he would do chores around the house to earn the money to pay for the new rosin. Neither of us were angry with him about this, but we calmly explained that when we break someone else’s things, even if it’s an accident, we fix or replace the item.

Here are other things that the boys have paid for or fixed over the years:

3. Teach about self control at times when kids are not already in trouble.

As I wrote in my earlier post on self control, learning to think through decisions is a process for boys, and a long one at that! When a child is in trouble, he’s probably not at his most teachable. It can be good to discuss “what if” scenarios and think through wise choices at a more neutral time.

Here are some ideas for dinner table self control discussions. For any of these, you can ask questions like, “What are some risks to be aware of in this situation? What would be the proper safety precautions to take? How might your actions either help or bother someone else? What would be appropriate behavior for this situation?”

4. Play together and provide high energy activities that are fun and appropriate.

This sounds obvious, but I sometimes find myself forgetting that the boys need time to get outside and ride bikes and throw a ball. Aidan (age 10) really enjoys having “real” jobs to do, like hammering nails back in the swing set, hammering on replacement fence slats, raking leaves, etc. One day, he had a blast helping my dad clear dead tomato plants out of their garden. He loves to use a shovel and the wheelbarrow. Boys need opportunities to dig, climb, and throw things. Play chase, hide-and-seek, and shoot Nerf guns or water guns. Don’t say “no” to everything active!

For active play ideas, check out my post on 10 Ways for Kids to Burn off Energy.

If you found this post helpful, be sure to check out the rest of the Biblical Boyhood series:

Part 1: The Heart of a Hero

Part 3: Setting an Example of Biblical Speech: A Challenge for Moms