As I’ve written before, I think that sibling conflict is one of the most exhausting aspects of mothering. Some days, it’s relentless! And as I also said in this post, there is not an easy fix to sibling fighting. The way I see it, there are two aspects to our approach as moms. Sometimes, we just need to manage behavior. Siblings need to be physically separated for a while, rules need to be made, etc. But then there is also the most important aspect – the spiritual training. Our kids need to be grounded in what God has to say about human relationships. They need to learn what the Bible says, and they need to be instructed by example in what it means to live it out.

Recently, I came across some encouragement in this task in a very interesting place… 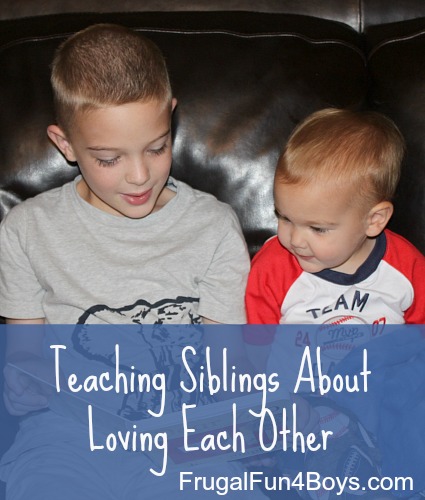 This school year, we are going through Sonlight Core F, which is all about the cultures of the Eastern Hemisphere. We started off by reading a missionary biography called Torches of Joy, which tells the story of John and Helen Dekker and their work with the Dani people of Netherlands New Guinea in the 1960’s (Amazon affiliate link). The Dekkers entered an area of the world in which the native people were still living in the Stone Age. They were confronted with the task of explaining God’s word to people who had a very limited understanding of the world.

Because the Dani people believed that they originated from a large crack in the earth, John had to teach them about the Creator and what it meant that they were created in His image. And as he taught them about what the Creator did in sending His Son to pay for their sin, lives began to change. I was really struck by the fact that being created in God’s image really affected the Danis’ daily lives.

“The Danis began to understand that those made in the image of God are kind to their neighbor whether he is kind or not. If a neighbor’s pig falls into a pit, God’s children pick it up. Acts of kindness were no longer to obligate the other person so that he would help in return.

‘God’s children are kind and loving, not for what they can get out of it but to show the character of God,’ John reminded his listeners again and again.

For those of us who have grown up in the church, it’s easy to gloss over the fact that we are created in God’s image and see it as something that is true, but not necessary for everyday life. But honestly, without this reference point, instruction to our kids is nothing more than morality!

We can make it about the nobility of doing the right thing (manners for manners’ sake):

“You should be nice! See, isn’t it better when we’re nice?”

“You don’t really want to take that from your brother, right? It’s more fun when everyone has a toy!”

Or about the irritation that their actions are causing us:

“Your fighting is driving me crazy! I can’t stand another minute of this bickering! Why can’t you just be kind?”

But really, it needs to be about the fact that God created us. We are His children. He made us His children, not so that we could go our own way, but so that we could reflect His character. When we ask our children to love each other in light of the love that God has shown for us, life makes sense! Our requests are rooted in the truth.

“Son, I know that what your brother did was not kind and that you are hurt. But God showed His kindness to us in that while we were yet sinners, He died for us (Romans 5:8). I know it’s really hard, but God will help you to respond with love if you ask Him to.”

“Son, I know that your brother has been a pest today. But it would be great if you would reflect God’s character by reading him some books anyway. Think of it as serving the Lord.”

“Boys, we need to speak with kind words because God always speaks with words that are good. He created us to be like Him.”

I am working on changing the way that I talk to my boys. Not every conversation will have spiritual benefit, of course, but I’m working on pointing them to God’s character rather than simply to human reasons for morality. Will you join me in this challenge?

Sibling Squabbles and the Kindness Car