Here is another fall idea from Gresham (age 7)! If you’ve been following our blog, you might remember that he came up with the idea to make fall tree “snow” globes earlier this fall. Last week, we were at Michael’s, and he asked if we could buy a bag of real feathers to use for a turkey craft. Well this week, Owen arrived on the “T is for turkey” page in his Get Ready for the Code phonics book, and I announced that it would be a good time to figure out what kind of turkeys we wanted to make. Well, Gresham already had an idea! He wanted to use paper bags to make puppet turkeys, so that is what we did!

Just for fun, I thought I’d include the entire scenario surrounding this craft. Be sure to read the whole post for an opportunity to feel better about whatever chaos is going on at your house!

While I was getting out the supplies, (paper bags, construction paper, googly eyes, clear Elmer’s glue, Tacky glue, scissors, and feathers), Jonathan was busy dumping out the contents of a box of cereal onto the kitchen floor. Thankfully the box was only about 1/3 full. I asked Aidan to please stop working on his history and to sweep up the cereal for me so that I could keep the other two boys going on the turkey project. You never know what might happen to craft supplies if you leave Owen unattended with them… Aidan said that he could not sweep up the cereal because Jonathan was playing in it. I told him to put Jonathan in the school room with me, and that I would hang onto him if he started heading back to the cereal. Well, Aidan decided that a better plan would be to build a barricade out of our dining chairs so that Jonathan could not come in the kitchen. I didn’t notice that this was going on until I heard Jonathan sobbing by the edge of the barricade because he could not get in!

I put Jonathan at the school table with us, and we kept working on the turkeys. Gresham wanted to look at pictures of real turkeys on the computer so that he could see how he wanted to make his. While I was searching for pictures, Jonathan helped himself to a paper bag, which was fine with me. Owen and Gresham burst out in alarm, “Mom! Mom! Look at Jonathan! Look what he has! He has a bag!” I less-than-patiently assured them that Jonathan was fine and that I needed them to focus on what we were doing and stop parenting Jonathan! Then they were both mad because I yelled at them. So I stopped and apologized for being impatient with them. Then we were finally ready to make the turkeys!

Jonathan decided that he wanted his own turkey, which makes this his first real craft! Usually, he just wants to play or scribble with crayons while we do projects. 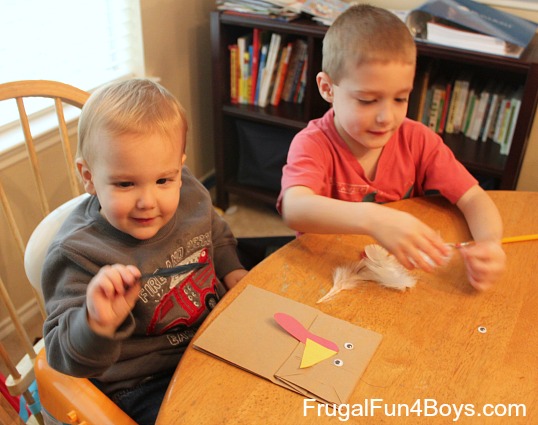 Step 1: Cut off the bottom of the bag. We cut off about 2 inches. This makes the body of the turkey look more like a turkey shape.

Step 2: Cut out the beak, gobble, and feet from construction paper. We didn’t use a pattern for the beak – the boys just cut out triangles. Owen made his go a different way from what I cut out for Jonathan, and his turned out cuter!

Step 3: Glue on googly eyes and the beak and gobble. We used clear Elmer’s glue for the paper, but we had to switch to Tacky glue for the eyes so that they would stay on.

Step 4: Glue feathers to the back of the bag with Tacky glue. 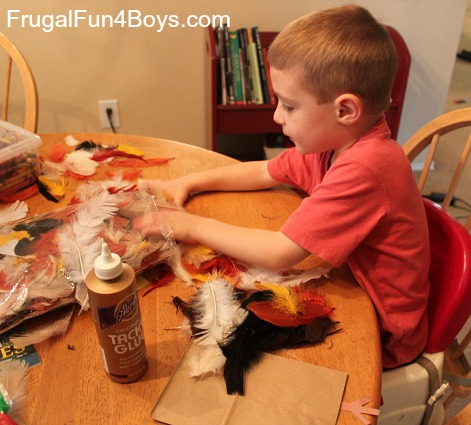 Jonathan didn’t quite understand the concept of glue, and after he admired his turkey’s face for a few minutes, he peeled it back off. Gresham was very bothered about that, so I stuck it back on. While I was putting the face back on, Owen was holding up feathers for our dog like they were dog biscuits that he should beg for. And then the dog ate one. “Don’t feed feathers to the dog” is the latest thing on my list of things I never imagined I’d have to say as a parent!

The finished turkeys were SO cute! 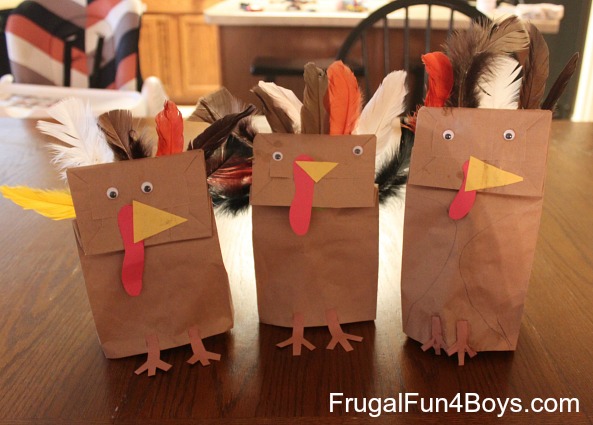 This project probably used up less than 10% of our feathers, so we’ll probably be back with more feather crafts! 🙂

Also, check out the pine cone turkeys that we made last year. These would be even cuter with real feathers!

Or, build a turkey out of Legos!