At our house, we have been dealing with pestering as a source of sibling fighting and conflict. This has been a challenge to deal with, because on a certain level, I just don’t get it! By nature, I am more of a people pleaser. I have never liked to think that someone was upset with me, and a stern look was all the correction I needed at times from a parent or teacher. I have to keep in mind that being a people pleaser is actually not any more godly. In fact, it’s wrong to do things for the approval of others instead of for God’s glory. But people pleasers do have a somewhat easier time getting along with others. It can definitely be tough to live with a child who sees no reason why he shouldn’t pester people! 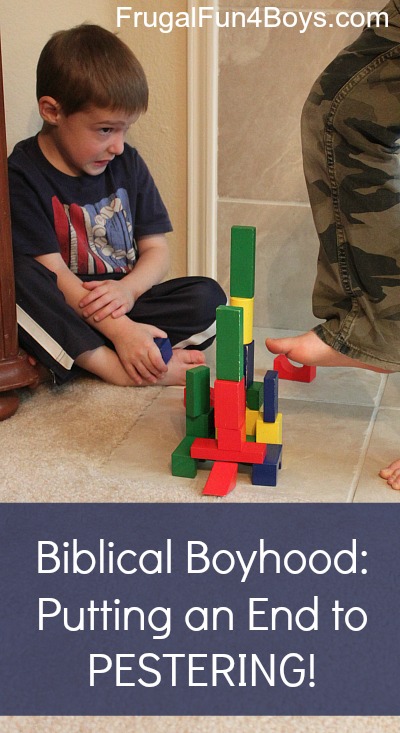 Awhile back, I came across this verse:

“When a man’s ways are pleasing to the LORD,

he makes even his enemies to be at peace with him.”

We know from other places in scripture that at times, persecution is unavoidable (2 Timothy 3:12). But the desire of a Christian should be to live at peace with all men unless strife is unavoidable because of another person being bothered by our allegiance to Christ or the truth that we stand for. Conflict should not be the result of our selfish or offensive behavior! I have counseled the boys many times to stop living out the opposite of this verse – “When a boy’s ways are not pleasing to the Lord, he makes even his brothers to be his enemies!”

There is so much wisdom in Proverbs 16:7. I shared this verse with the boys a couple months ago, and we have discussed it many times since. We’ve talked about what kinds of “ways” are pleasing to the Lord and about how self-centered behavior often causes trouble. However, the boys still struggle with getting great enjoyment out of pushing other people’s buttons.

Mom: What was going on upstairs that made your brother so angry?

Son: I don’t know, I was just playing dragons with him, and he just started screaming for no reason.

Mom: Did he want you to play dragons?

Mom: Were you making the game too wild?

Son: No, I was just playing something that he wanted me to do!

Mom: Well, it sure didn’t sound like he was happy with what you were doing! What was happening when he got mad?

Son: I was making the dragons attack his fort and kill his guys.

Mom: So should you have been playing that way?

Son: Yes. It was really fun.

Mom: So it was fine for you to do even though your brother was bothered?

Son: Well, I wasn’t doing anything wrong. We were all playing that game.

After one of these circular conversations, I told this particular son that we were taking a break and that we would come back to the conversation. I thought and prayed, asking God for help in getting to the root of this issue. It was clear that the child had no problem with the fact the he had offended his brother. Then I had the idea to turn the question around…

Son: Um, when a man’s ways are pleasing to the Lord, he makes even his enemies to be at peace with him.

Mom: Yes! When you were upstairs, what were you doing to live out that verse?

Mom: Yes, I agree that that is probably true. What do you need to do to make things right with your brother?

Son: I need to apologize to him for how I was playing.

Isn’t God’s word amazing? I could come up with a rule against pestering. And I could list off all the possible ways that the boys could pester: no taking another person’s toy, no teasing, no laughing when someone is in trouble, no cheating during a game, no putting on someone else’s hat/shoes/etc. just to get a reaction, but that wouldn’t solve the problem. There would always be a loophole for a behavior that I didn’t think to include! But instead, God gives us such a clear command that involves the heart and not just the actions (and which applies to adults too!). Does the person I’m playing with not enjoy loud games? Then I should put him first and not play that way. Is everyone in the car tired of my singing? Then I should stop singing, not exercise my right to sing when I want.

More question ideas for the child who pesters:

For the child who doesn’t accept instruction:

If my child is not responding to me telling him that his behavior that is obviously bothering others, I give him something better to do with his time – wipe off the table or sweep the kitchen. There are plenty of productive things to do for people who make poor choices with their time!

We have also had several occasions where the child who pesters doesn’t want to stop, and it keeps happening over and over. When that happens, the consequence is that he cannot be with the rest of the family. I find a room for him to be in by himself, bring his schoolwork to him, and explain that people who stir up conflict don’t get to be with the family. They hate to be alone, so after 30 min. to an hour alone, they are ready to do what it takes to be pleasant.

Pestering is not something that can be conquered instantly, but by God’s grace we are seeing some improvement!

For more on sibling conflict:

Teaching siblings about loving each other

Dealing with sibling fighting and rudeness

Sibling squabbles and the kindness car