We have a fantastic game to share with you – Laundry Basket Skee Ball! I’m especially excited about this game because it’s simple to set up and it’s something active to play indoors that will (hopefully) not involve breaking anything! And it’s not very loud either.

A couple months ago, I bought Janie a pack of ball pit balls (affiliate link) at Walmart on a whim. It has turned out to be money very well spent! All of the boys (and Janie too) have been enjoying the balls and finding a surprising number of things to do with them. 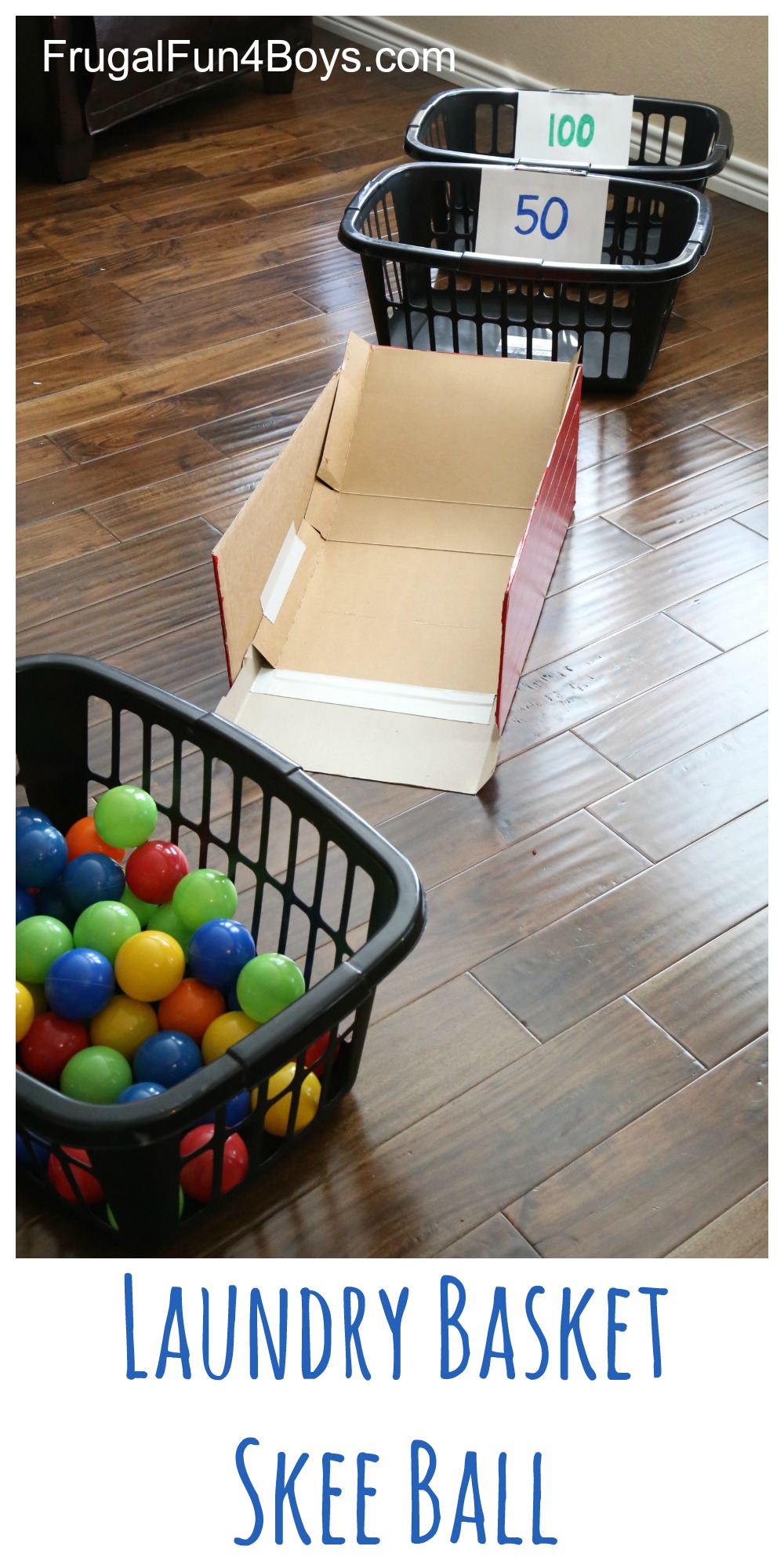 Laundry Basket Skee Ball is quite simple. My husband turned a Costco diaper box into a basic ramp that launches the balls into the air. (I think we have made something with almost every Costco diaper box we’ve purchased – last time it was this Hot Wheels car race track!) 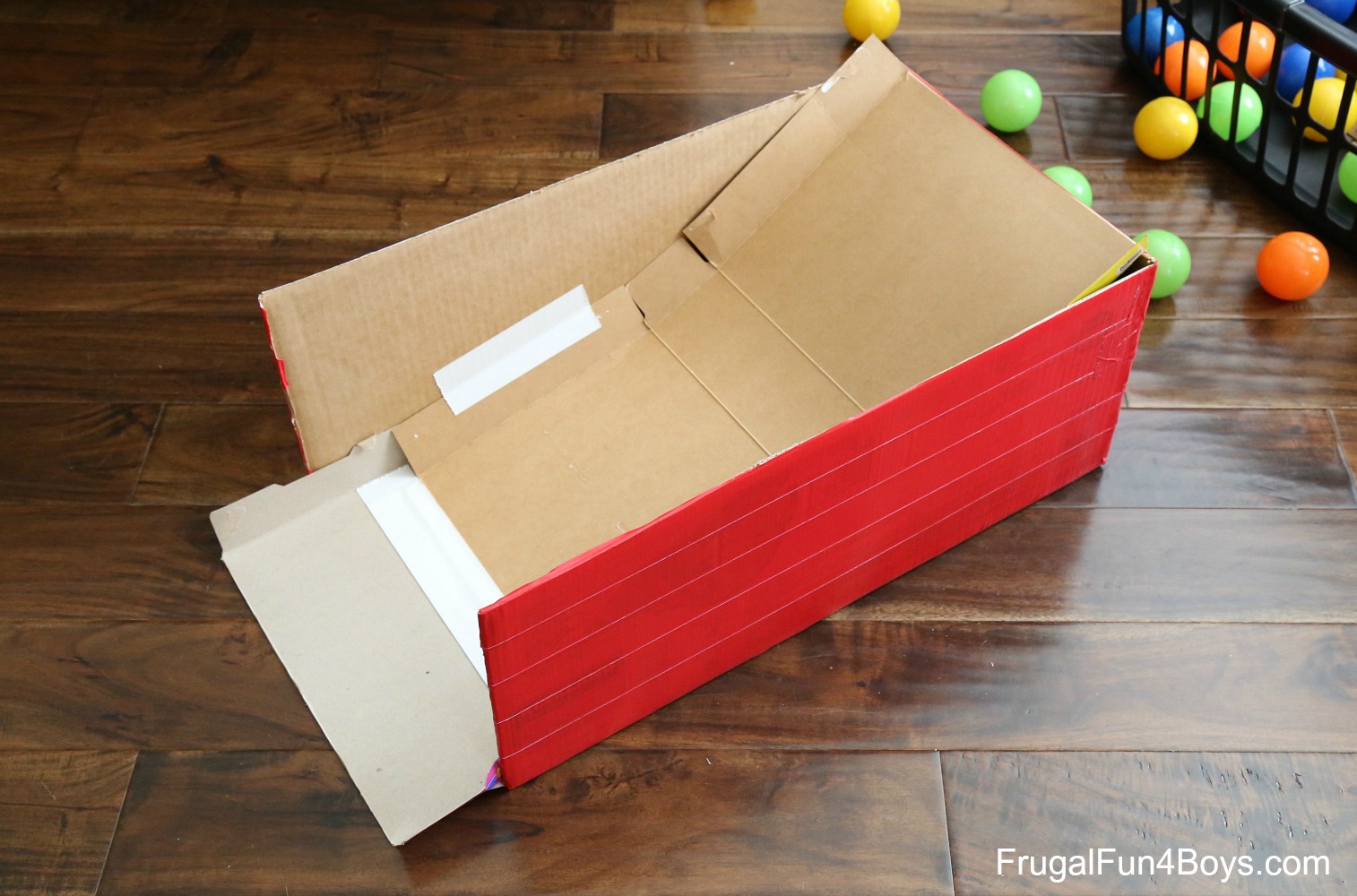 To make the ramp, Jordan cut off the top and one end from the box. Then he used a couple of cereal boxes to create a curved ramp and taped it in place with duct tape.

To play the game, simply roll the balls up the ramp and launch them into the laundry baskets. It works best if you kneel to roll the balls. We have been using two baskets, with the closer one labeled 50 points and the farther one labeled 100 points. 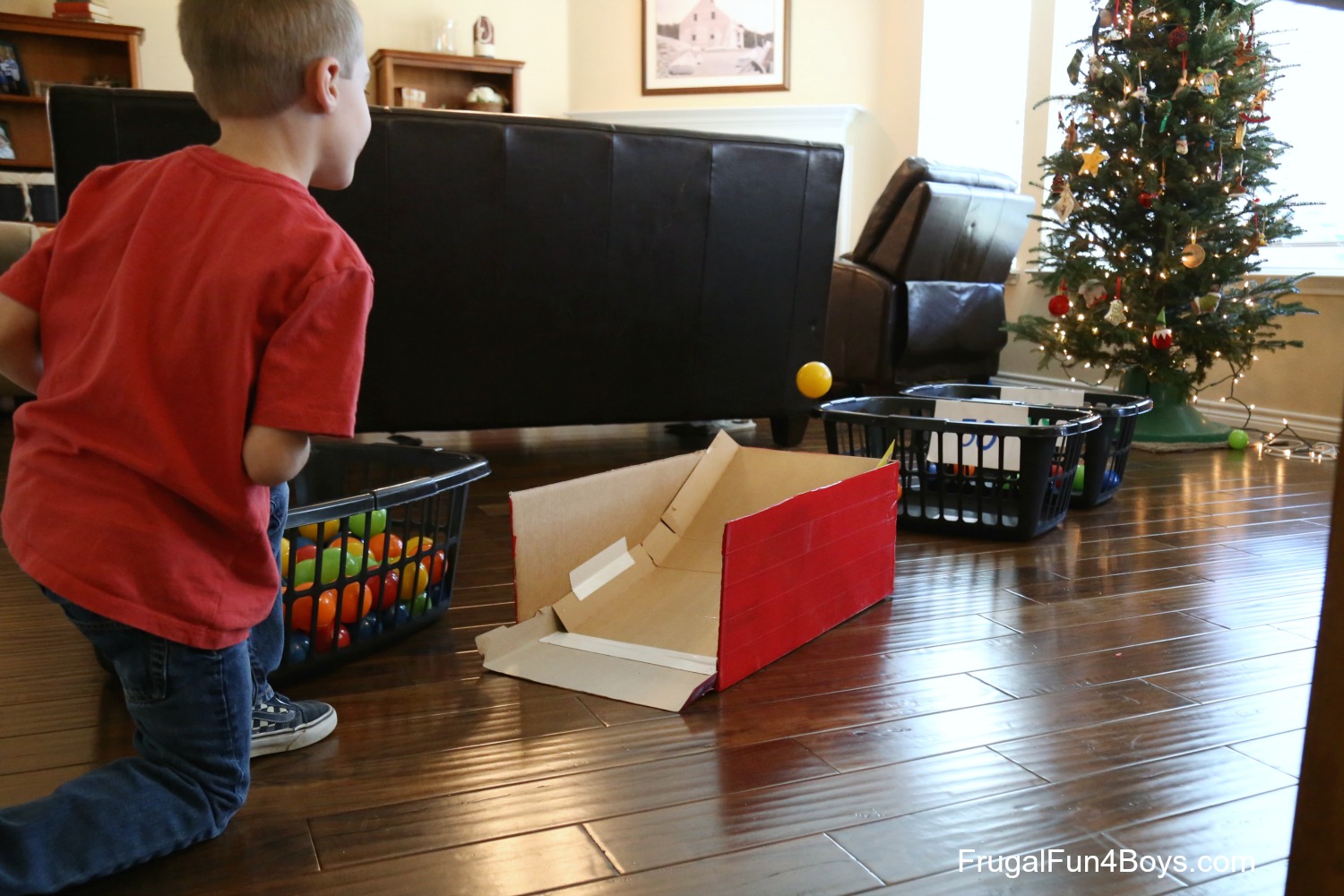 I had created this game with Jonathan (almost 4) in mind, but he’s not quite coordinated enough to roll the balls and not throw them. He probably could figure it out how to make it work, but he hasn’t been interested. However, Owen (6) and Gresham (9) have been loving this game! It’s the perfect thing for Owen to do inside during nap time. He is just dripping with energy, and indoor active games that aren’t crazy are just what I need for him when the weather is bad. 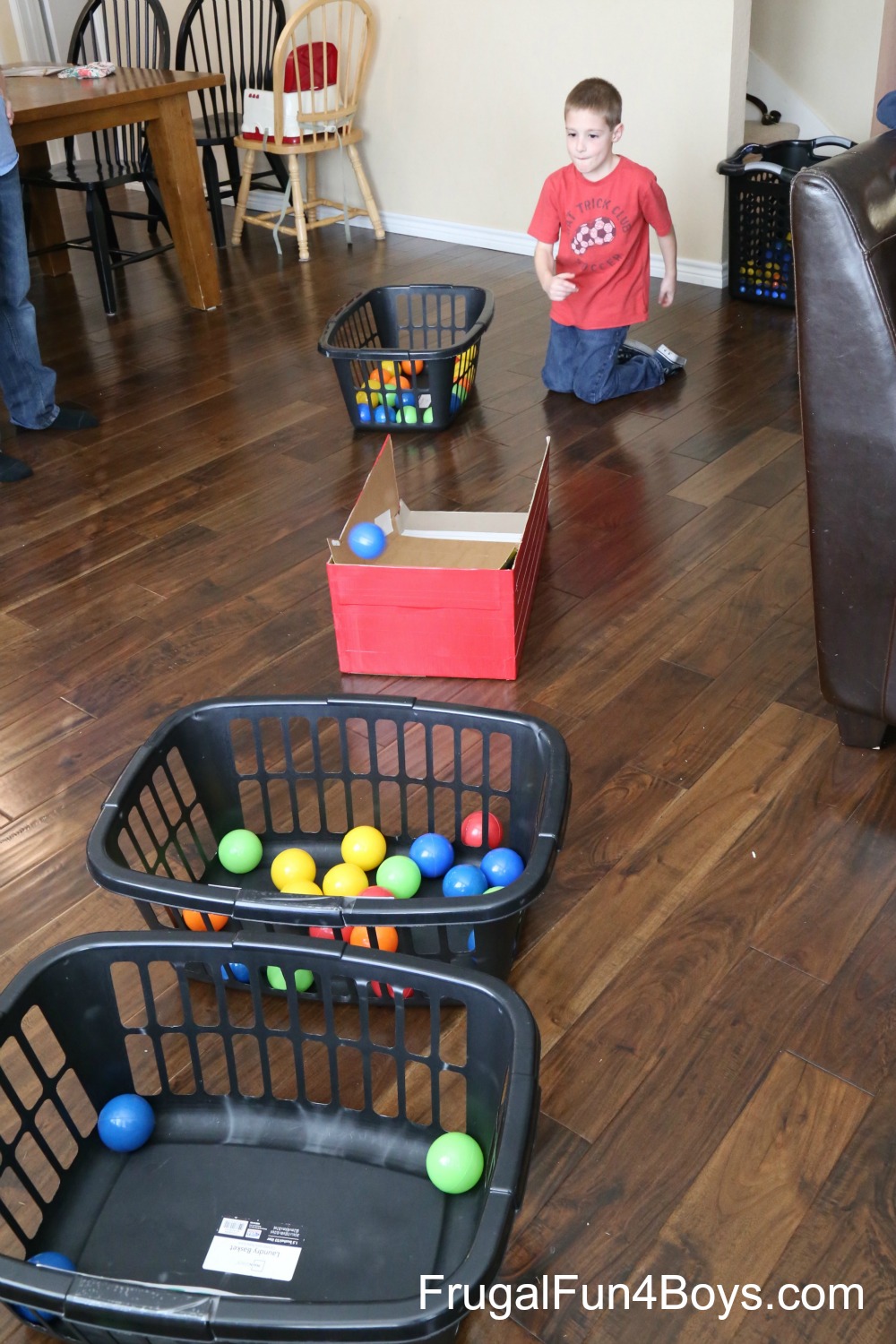 If you need ball pit balls, here are some on Amazon (affiliate link): 100 Ball Pit Balls. Keep in mind that if you are trying to fill an indoor ball pit or a plastic swimming pool, it’s going to take more than 100. If you’re just playing with them around the house, 100 is plenty to pick up off the floor! 🙂 Thankfully, the toddler thinks it’s fun to clean them up. We store ours in a laundry basket – a taller one that the ones in the photos. 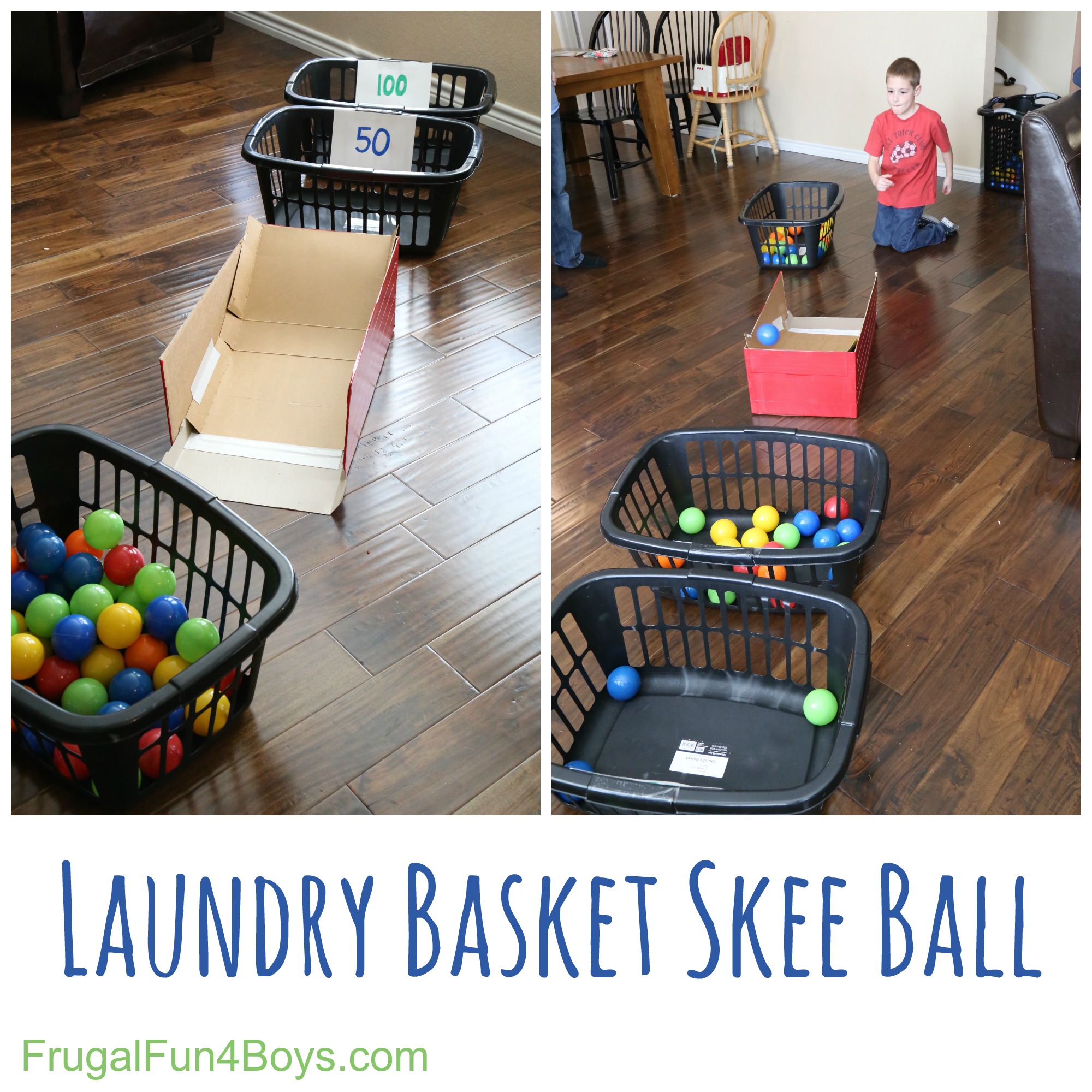