With four boys, our house has a lot of noise and a lot of energy! (If you want a demonstration, just check out the video in this post!) I would say it gets better with age, but my oldest son (9.5 years old) has the most energy of all of them, so I think it’s probably a personality. My 3 year old has a lot of energy too, although he’s not quite as loud. Over the years, I’ve gathered a list of ways that are okay for them to burn off a little steam, because we all know that if high-energy kids have nothing to do, they’re going to find something!

Some of these ideas are good for inside, and others for outside. Also, I think it’s important to mention that for some kids, an activity that requires a lot of thinking rather than a lot of physical exertion is actually more calming. So at the end of the list I have some ideas for kids that will challenge their minds and their creativity. Since I have all boys, most of these ideas will appeal to boys, but girls will probably enjoy many of them too! 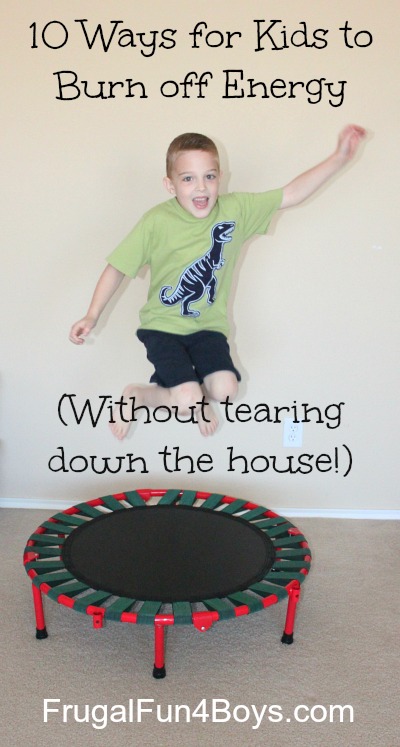 1. Hit balloons back and forth with homemade cardboard paddles.

2. Trick Show. My boys love to show off all the amazing things they can do! This game works well indoors or outdoors. Simply be an enthusiastic audience for your kids, and let them show off their stunts (front rolls, amazing jumps, etc. within reason) one at a time.

3. An indoor ball game with one of those cheap lightweight balls from the toy department.

My boys invented a game that they named “Jump It.” Several versions have grown out of the original version. To play Jump It, two players stand across the room from each other, facing each other. They take turns throwing the ball at each other. The other person must jump over the ball, dodge the ball, or catch the ball. If the ball hits them, they lose a “life.” The boys usually start with 8 lives each, and they play until someone has lost all of their lives.

Ninja Jump It: Same rules, but you try to kick, knee, karate chop, dodge, or catch the ball.

Sword Jump It: (This is the greatest version, they say.) Each player has a Nerf sword. The players cannot use their hands in this version, but hit the ball back and forth with their swords. 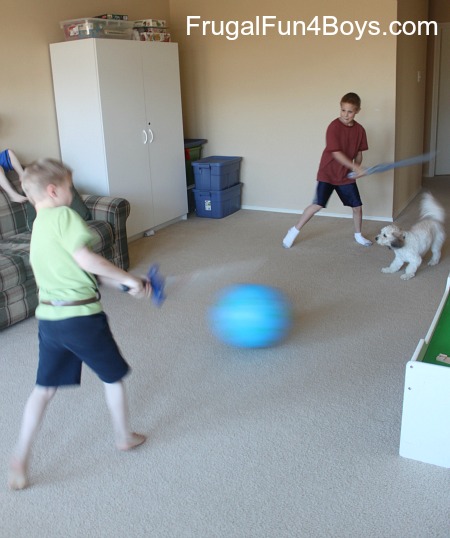 I cannot tell you how many hours they have spent playing all their variations of “Jump It” this winter! This game works indoors for us because we have a play room. This type of ball does not hurt people at all, but I wouldn’t want them to play it in any room where they could knock down decorative items.

4. Fling cotton balls with plastic fork catapults. This is as simple (and fun!) as it sounds. Or, recycle plastic restaurant cups into ping pong ball shooters!

5. Hold a family backyard olympics. We did this last summer with some running, jumping, and Nerf shooting events. I gave each of the boys a name tag to wear around their necks, and we recorded scores for each person on their nametag rather than having them compete against each other. This idea would also make a fun birthday party or multi-family summer get-together!

6. Throwing ice. Simple, yet so much fun! We did this the other night after a long school day. I took a plastic container of ice out front, and let the boys throw the ice out into the street. They had a blast watching the ice break as it hit the pavement. Then they went out and gathered up the ones that didn’t break and threw them some more, then stomped on what was left. 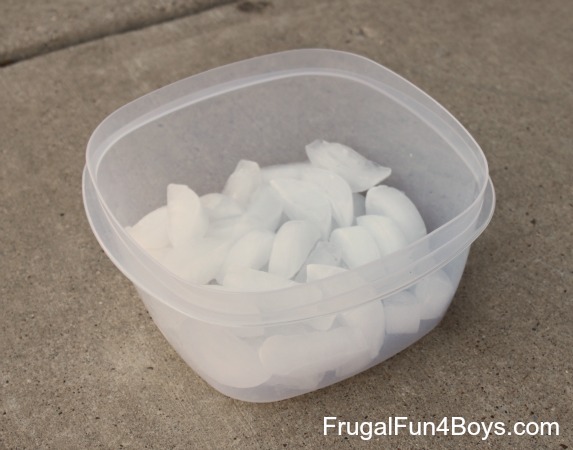 7. For preschoolers – see how many ways you can think of to get from one side of the room to the other. Think beyond just running or jumping! There are several ideas in this post.

8. Go to a stream or pond and throw rocks. Older kids can learn to skip stones. Kids find it really satisfying to hear that “plunk” when they throw a rock into the water and then watch the ripples form. 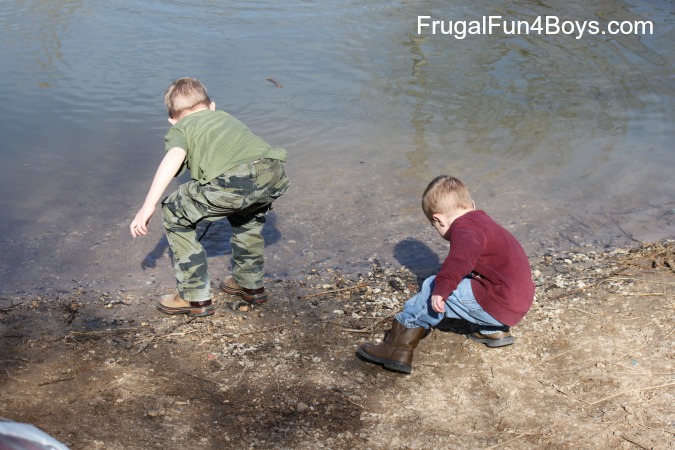 9. Invest in a mini-trampoline. Ours has been totally worth it! High-energy kids can bounce for a few minutes to get the wiggles out before sitting down to do schoolwork or homework, and they might even enjoy bouncing while you drill them on their addition or multiplication facts. We own the Fold & Go Trampoline because we wanted a handle to hold onto since Owen was only 2 when we got it. However, you can spend less if you get one without the handle. Our gymnastics gym uses Pure Fun trampolines. (Amazon Affiliate links)

10. Get your kids busy with something that involves the mind. For some kids, active play will only make them wilder! Everyone needs exercise, of course, but sometimes an activity that challenges the brain can be just the thing for soaking up some of that excess energy. For older kids, challenge them to build a bridge out of straws and straight pins or to build a Lego boat that will really float. For preschoolers, try having them cut alphabet letters out of cereal boxes and other food packages. My 3 year old will happily spend a long time cutting and gluing, and he had fun cutting out the letters of his name to make a poster!

Use pool noodles to make an outdoor obstacle course – this looks SO fun!

Use straws to make an indoor high jump! Put out pillows for a soft landing.

For younger ones – 15 ideas for gross motor sensory play.

Toddler Tennis – throw soft balls or toys over a rope indoors. Lots of fun for little ones!