My kids love anything that can launch or fling items, and thishomemade paper airplane launcher really fits the bill! It’s easy to build and will take ordinary paper airplanes to a whole new level. Very fun for a stuck-indoors sort of day, and building and testing the planes involves all kinds of science, so it would make a great scouting or school activity as well. 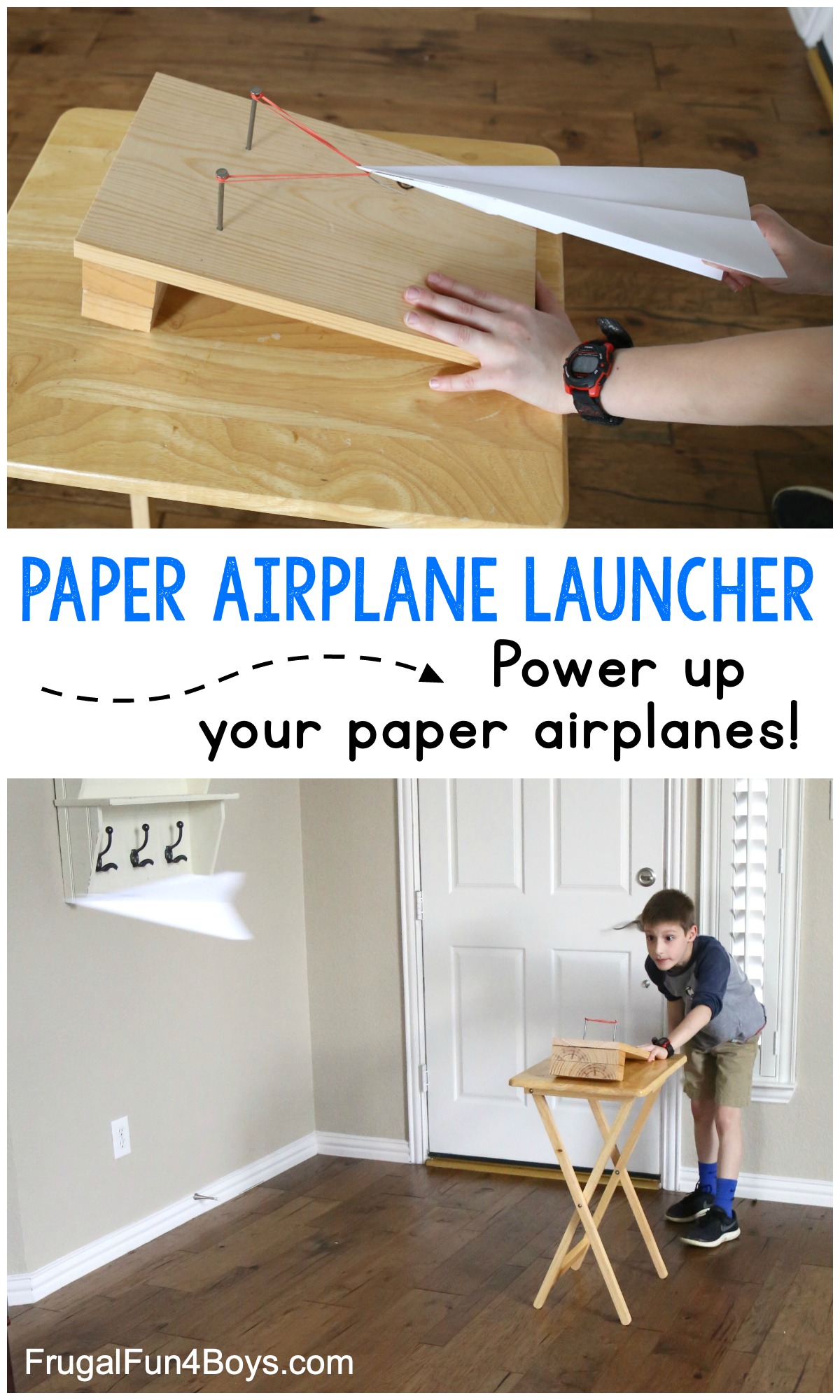 How to Build the Paper Airplane Launcher

To make our launcher, we grabbed a scrap board and two large nails. I wanted the launcher to launch the planes at an angle, so we cut another scrap board into two rectangles and used these to boost up one end.

To assemble it, all we did was drive the nails into the board. Then we used wood glue to attach the two rectangles under the nail end of the board. 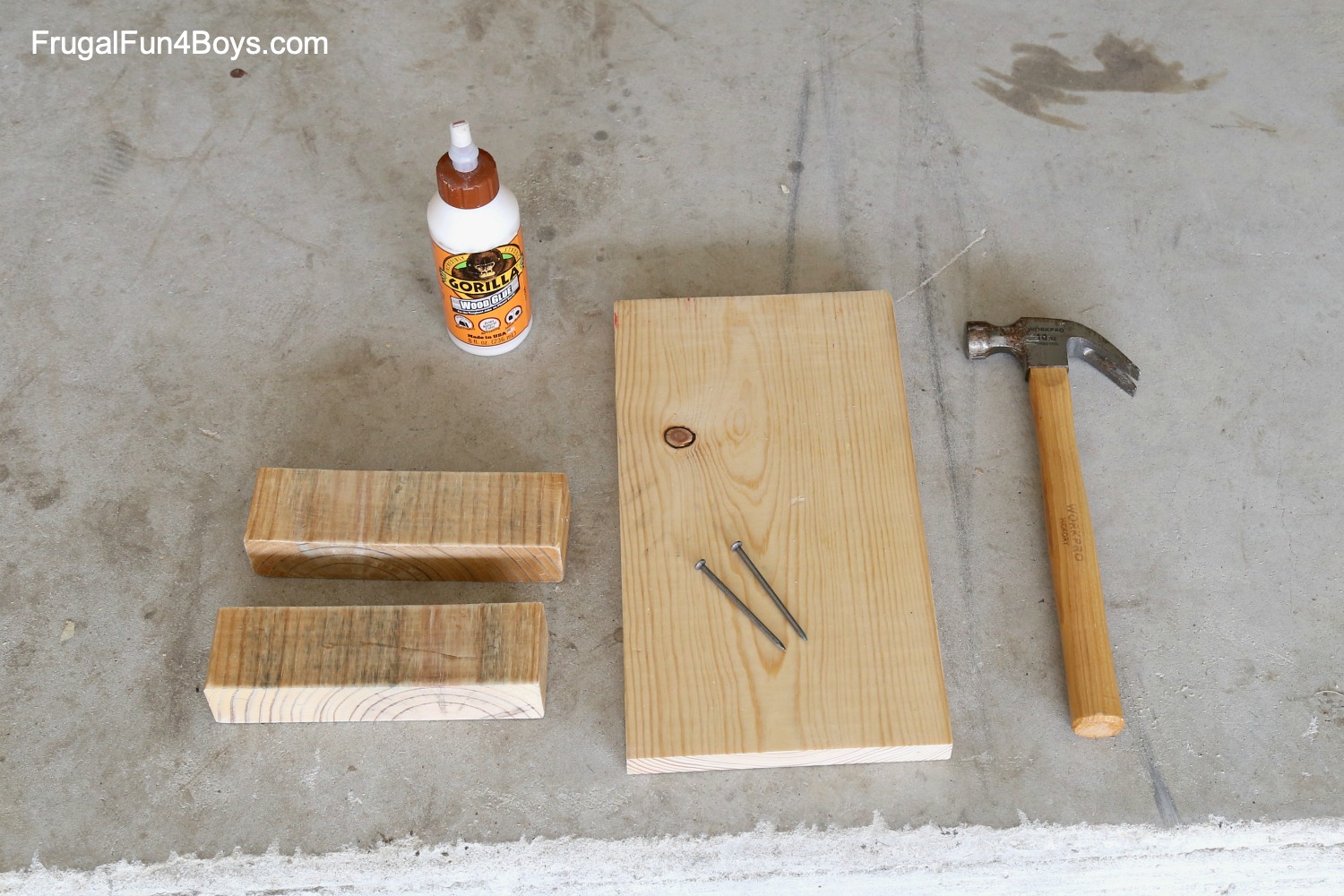 The wood glue did not take long at all to dry (I gave it two hours) and then we were ready to play! 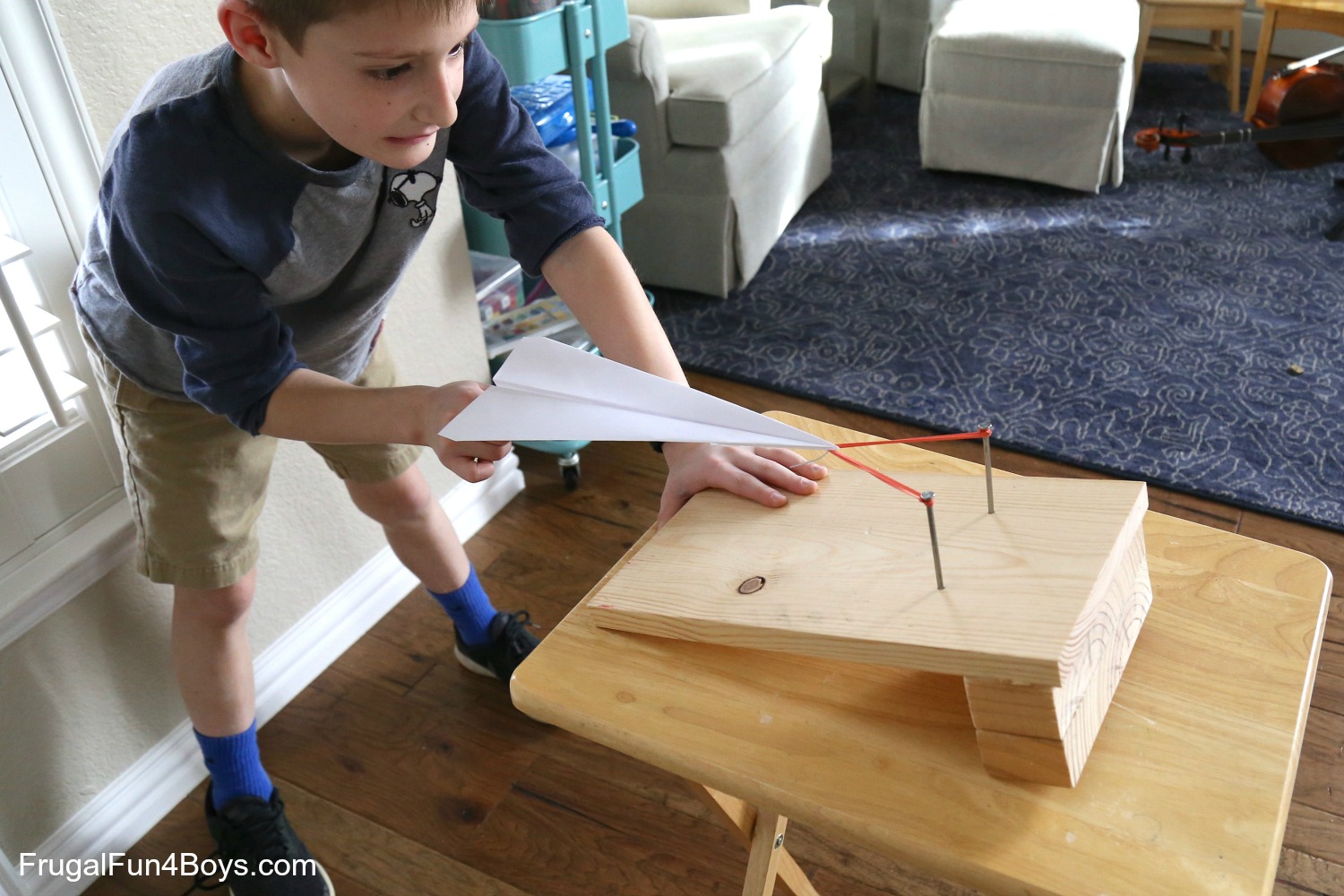 We tried shooting planes by just holding the tail of the plane against the rubber band, but the planes kept getting bent and they really didn’t shoot that far. I saw this idea to add a paper clip to the nose of the plane on Housing a Forest, and we decided to give it a try. The paper clip works as a hook and gives the airplane a way to grab on to the rubber band. It’s easy to launch planes with plenty of power!

To modify your plane, you will need a paper clip, a hole punch, and tape.

Unfold your paper clip as shown. Then punch a hole in the plane. The smaller end of the unfolded paper clip will go through this hole. 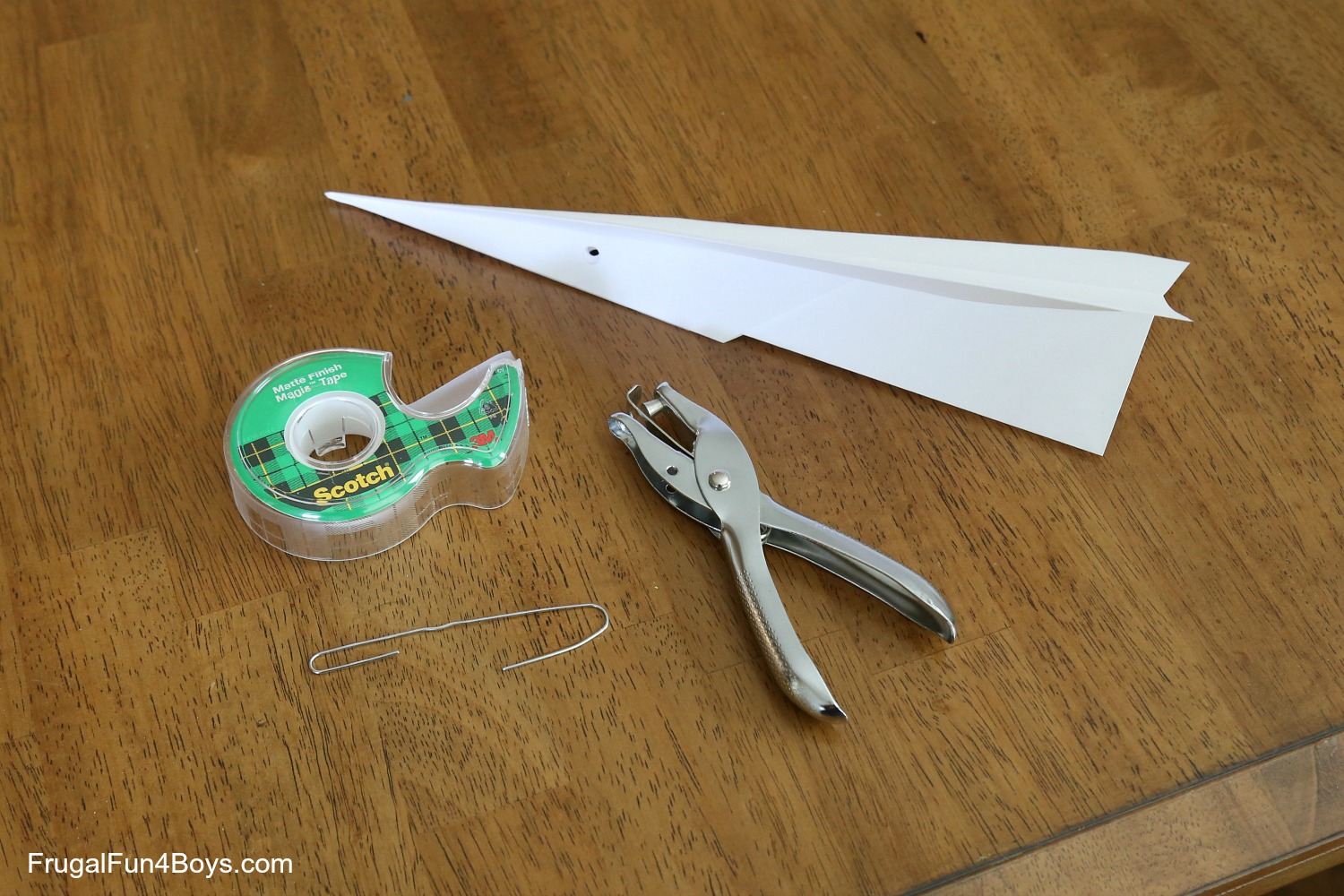 Tape the paper clip to the nose of the plane as shown. Yes, there is a point involved, so use your own discretion as to what ages would be appropriate. With proper supervision, I do not consider this to be a dangerous activity, especially since the rounded part of the paper clip faces forward. 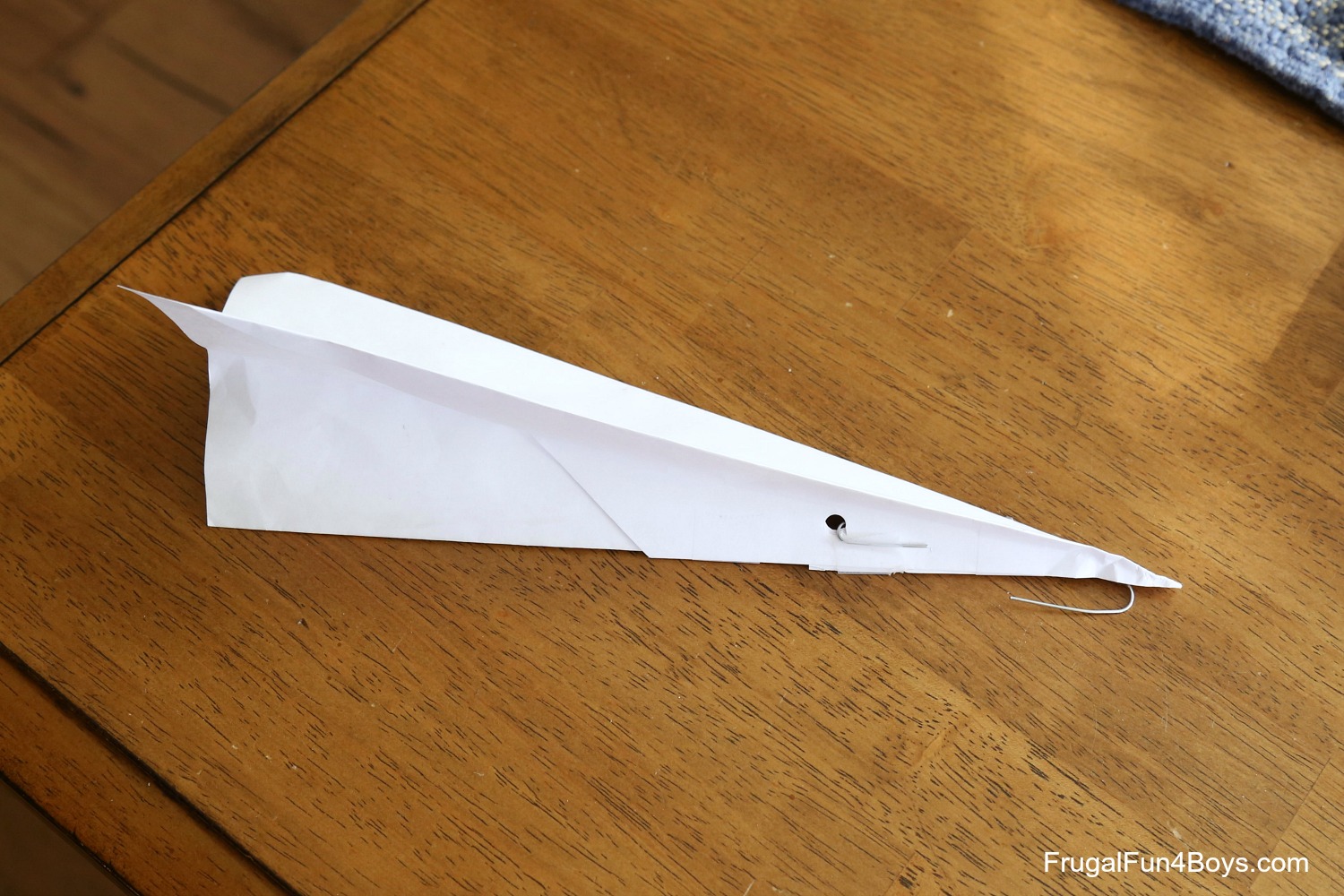 To launch planes, simply pull back and shoot! You can play with this paper airplane launcher right on the floor, or put it on top of a table if you find that more comfortable.

The paper airplane launcher makes planes fly MUCH farther than they would if you threw them. They also fly faster! So much fun. 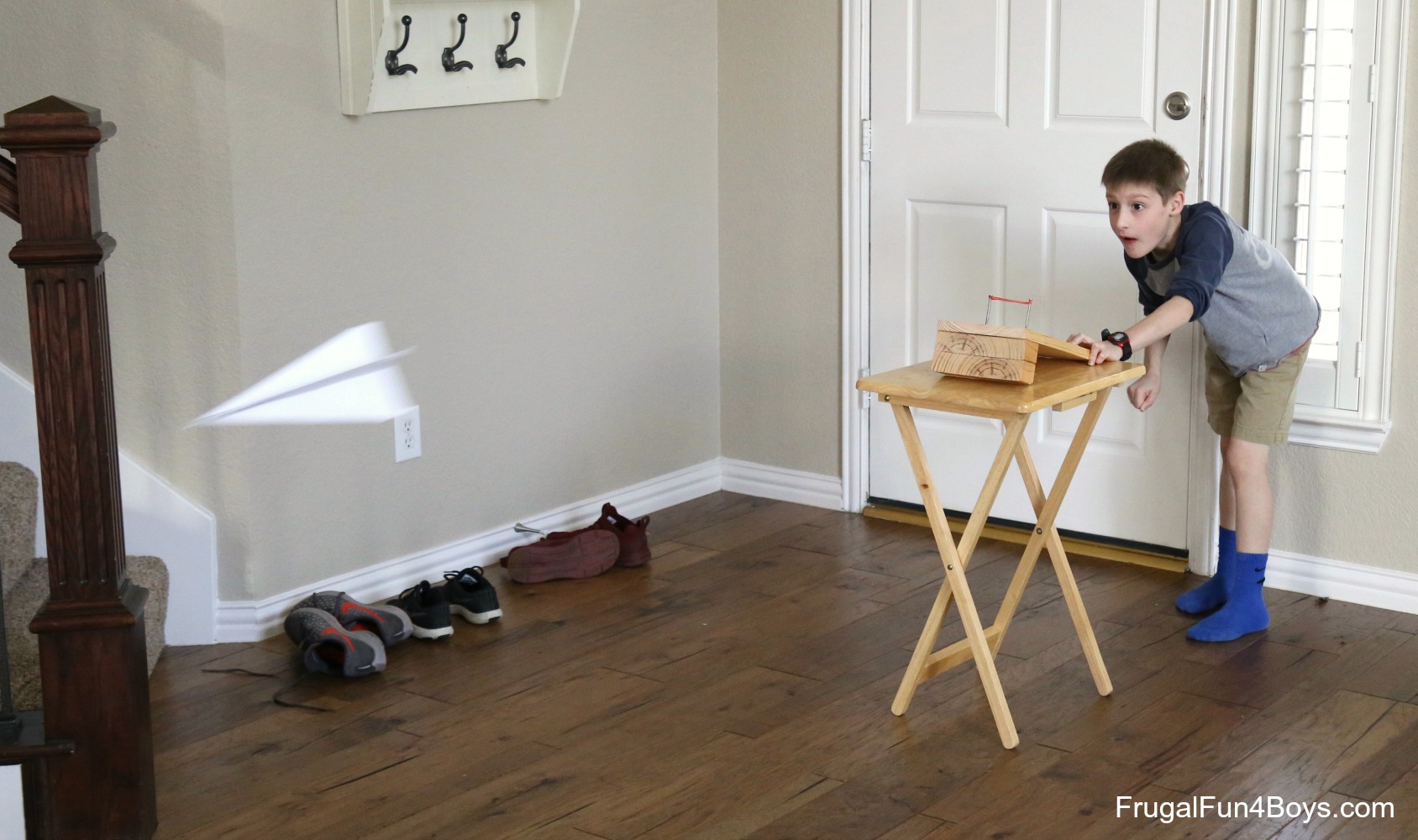 We haven’t found the limit yet of how far planes will go because they kept hitting the wall! We can’t wait for a decent weather day to try this outside!

More things that launch and fling: