Here is a fun game for beginning readers that involves a great attention-catching element… slapping with a fly swatter!

Owen (almost 5) has been very interested in learning to read lately, mainly to keep up with his brothers. He’s not quite developmentally ready yet, so we’ll be taking it very slow. He knows most of the sounds for the consonants, and we are starting to work on vowel sounds and short three letter words. When he tries to read a word like “cat,” he looks at the word and says, “c-c-c-c-c (pause) a-a-a-a-a (pause) t-t-t-t-t-t” while staring at the ceiling. Not very helpful for figuring out the word!

I was trying to think of a way to get Owen (a very tactile/kinesthetic learner) to read words by saying each letter sound only once. I asked him to bring me the foam bathtub letters and the fly swatter, and he was very curious about what we were going to do! 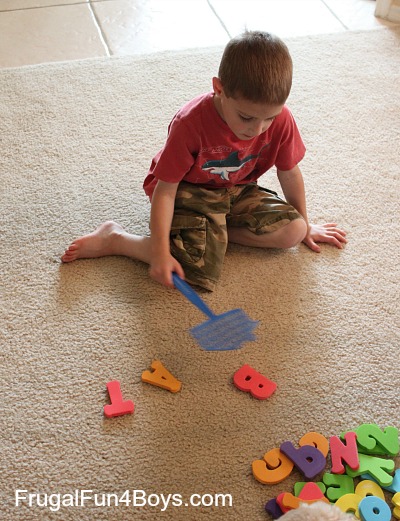 I made a three letter word for him, and asked him to slap each letter with the fly swatter and to say each letter sound ONE time. It worked! When he said each sound once, it was much easier for him to figure out the word! The letters bouncing in the air when he slapped them was definitely an added bonus. 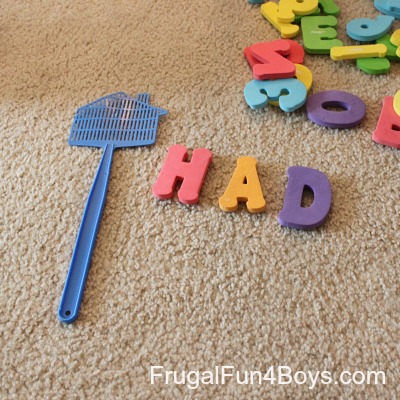 I could tell Owen liked the game because he told Dad about it when he came in from work – that’s the true test of how much they liked something!