If your house is anything like mine, you are always on the lookout for ways to deal with sibling fighting. It can be exhausting, can’t it? It’s so easy to just get mad in return (and believe me, I have done that many times), which never accomplishes anything.

The other day, we had quite an argument brewing at our house.

The topic of the fight was sandwiches. Specifically, who was going to make them. We have a standing rule at our house that if I am busy feeding or changing Janie and it’s lunchtime, the boys can go ahead and make sandwiches. The older boys (ages 11 and 8) each make themselves a sandwich plus one for a younger brother. Today’s fight was over who would make Jonathan’s sandwich. I couldn’t figure out what the big deal was… I mean, they both had to make a sandwich, so who cares which one?

Then it dawned on me. Jonathan eats a half sandwich. So making his was less work. One child had already had to thaw the bread (an extra step!), so he felt like he should do less work making sandwiches. The other child was holding staunchly to his position that he should be the one to make the half sandwich.

There was no doubt more effort expended in the conflict over sandwiches than the amount of effort that it would have taken to make a whole sandwich instead of a half. In fact, any one of them could have made all the sandwiches in less time!

What a slippery slope we’re on when we focus on making sure we get what’s fair… (Or “fair” in our opinion, which is usually very slanted!) 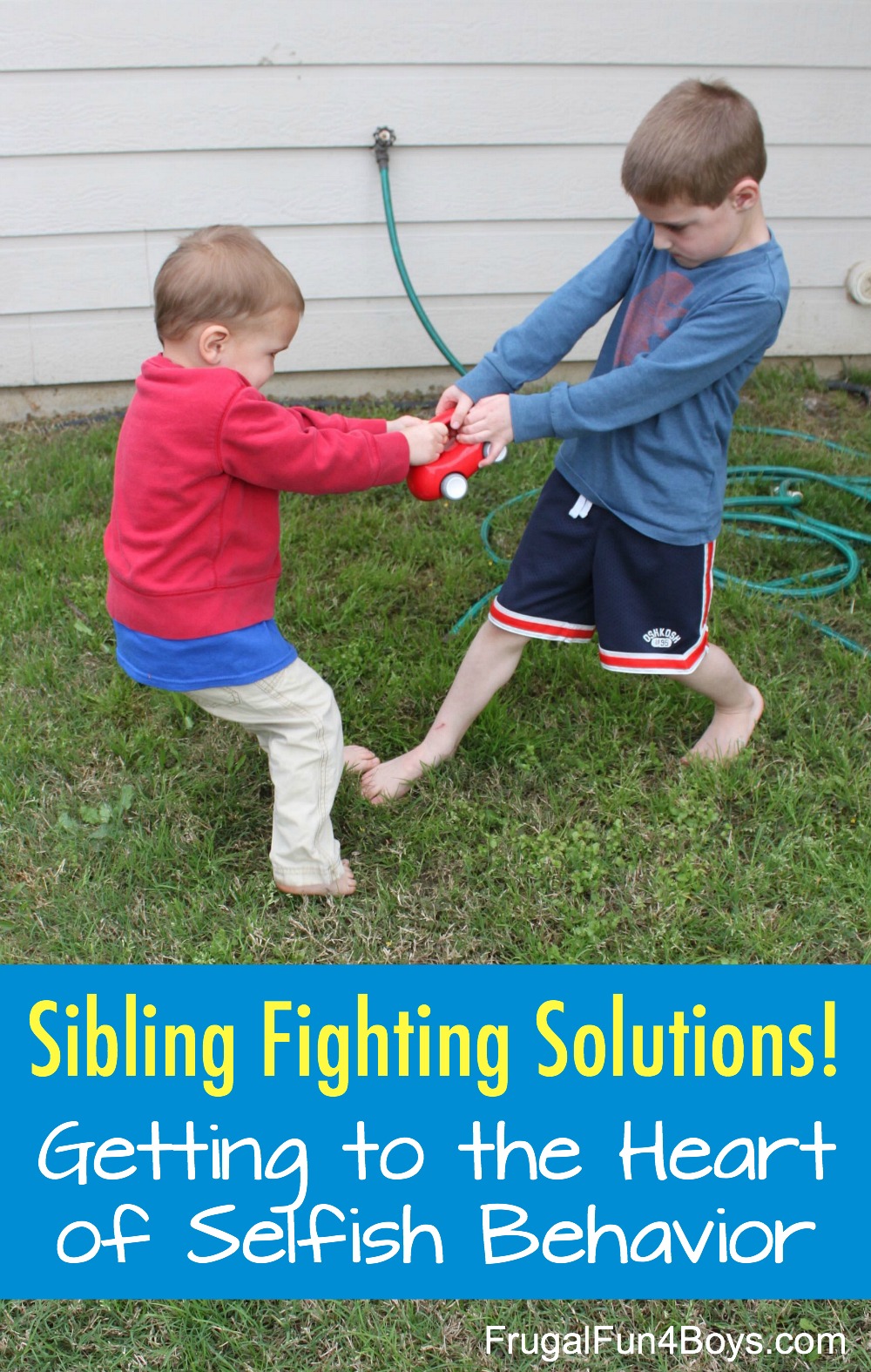 But all the lunchtime rules and procedures in the world will never solve the real problem, because the real problem is selfishness. We obviously need some rules and procedures to be able to function as a family. The boys may not just help themselves to someone else’s possessions without asking. The boys may not head off down the street on their bikes without checking with me first. But where there are rules, there will always be loopholes. And there will always be the desire to apply the rules to someone else while overlooking our own selfishness.

What does the Bible say about working to ensure our fair share?

I don’t know of any verse of scripture that advocates fighting for our fair share. The Bible doesn’t say that we are to sit back and allow others to abuse us, but it does say…

“For you were called to freedom, brethren; only do not turn your freedom into an opportunity for the flesh, but through love serve one another. For the whole Law is fulfilled in one word, in the statement, “YOU SHALL LOVE YOUR NEIGHBOR AS YOURSELF.” But if you bite and devour one another, take care that you are not consumed by one another.”

“Therefore I, the prisoner of the Lord, implore you to walk in a manner worthy of the calling with which you have been called, with all humility and gentleness, with patience, showing tolerance for one another in love, being diligent to preserve the unity of the Spirit in the bond of peace.”

“Do nothing from selfishness or empty conceit, but with humility of mind regard one another as more important than yourselves; do not merely look out for your own personal interests, but also for the interests of others.”

You see, the world says we’ll be happy if we can have it for ourselves. God says that true joy is found in giving it away.

I want my boys to understand that we get into trouble when we compare ourselves and our lot in life to the people around us rather than focusing on how good God is to us. The question is not, “Why do I have to fold 6 shirts when he only folded 4?” It’s, “What does God want me to do with this laundry job? I’d really rather play outside, but what would bring Him glory right now?” And when pleasing Him becomes more important than getting out of folding two extra shirts, we discover a joy and peace that we didn’t realize was possible.

Moms, teaching our kids in this area can be TIRING WORK!

The fastest solution is to take away the things. Or to separate the people. Or to buy two (or three) of everything. And sometimes, those things are necessary to maintain a measure of sanity. But living that way all the time robs our children of the chance to work through the problem and discover the joy of serving another. God’s word is TRUE and it will prove itself true in our children’s lives if they are willing to listen to Him.

The law of the LORD is perfect, restoring the soul! The precepts of the LORD are right, rejoicing the heart! (Psalm 19:7a, 8a)

Selfishness requires a heart change. The change is the work of the Holy Spirit, but what is our responsibility? To put the truth of Scripture before them!

It often helps us to write things down. Maybe sit down with your kids and make a list of examples before a selfish moment strikes, such as this:

Focus on the Lord:

Then when a situation happens, you can ask, “Which is more important to you right now – getting your way, or pleasing the Lord?” and your children will already have some practice thinking along those lines to process what is happening in his or her heart.

Try asking your kids to work out a solution when conflict arises. I’m not talking about ignoring a fight and letting kids solve it themselves (by the strongest one gaining the advantage). We *just* had this example come up… “He wants to look at that book with you. What solution can you think of?” And the child said, “I could sit on the couch and let him look at it with me.” Yes, perfect!

If one child in particular has been the instigator of most of the fighting, we have had good success with having him do his brothers chores. One son was recently rude all. day. long. Dad told him that he would serve each of his brothers by doing one of their chores. He had to clean two bathrooms and pick up dog poop in the yard, and the next day was SO much better! Yes, it’s true that doing extra chores does not automatically address the heart issue. But what it does do is correct the behavior. This is important, because it is easier for kids to grasp spiritual truths when their behavior is under control. We don’t do our kids any favors by allowing them to develop deep habits of rude and selfish behavior.

The boys really like the song “Fix My Eyes” by For King and Country. During the lunchtime issue that I mentioned at the beginning of this post, I asked them to tell me what that song says.

Give when it’s not fair

Life life for another

Take time for a brother…”

Give when it’s not fair… That’s really what it’s all about, isn’t it? And it’s HARD to do!

And yet the King of the Universe sent His only Son to live among our selfish selves. To give His life in our place when He deserved nothing of the sort. In Him we have a compassionate Father who gives us the strength to choose love when it is not “fair” to do so!