“You’re being a total liar. When mom comes back, I’m telling!”

Why do siblings fight SO much anyway?

The other day, I asked my boys why they thought that they fight with each other all the time, but don’t fight with their friends. They came up with a few reasons. One reason was that they would be embarrassed to carry on at Awana or a friend’s house the way they do at home. Also, their siblings are difficult to get along with. I told them that I think it’s pretty easy for all of us (adults included) to feel like we are overall nice, kind, and reasonable people. We truly would treat our family nicely, the way we treat people in public, if only our family members weren’t so difficult. It’s really easy to think it’s their pesky and demanding behavior that is the problem. The boys agreed with this!

The truth is, unfortunately, that we cannot blame our actions on other people. The behavior of others merely provides an opportunity to decide whether we are going to honor God or live for ourselves. It reveals our own selfishness. Situations may bring about temptations, but the responsibility lies with us as to how we respond. 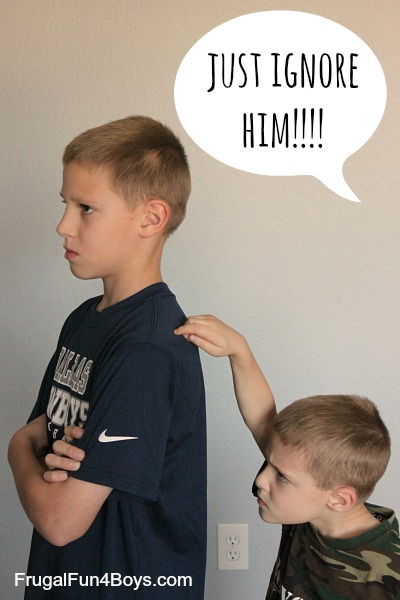 The problem with thinking that our rudeness is the result of difficult people is that it overlooks the truth of 1 Corinthians 10:13.

“No temptation has overtaken you but such as is common to man; and God is faithful, who will not allow you to be tempted beyond what you are able, but with the temptation will provide the way of escape al!so, so that you will be able to endure it.”

It is a common temptation to speak rudely and act selfishly with the people we live with. Some siblings don’t fight all that much, but many are tempted to fight a LOT. Personalities have a lot to do with it – some kids are naturally more compatible than others. But I think it’s good news that sibling fighting is a common struggle. Those of us who have kids who fight are actually not weirdos! And God promises to provide “the way of escape” from this temptation.

(Side note: There is a difference between “normal” and “right.” Sibling fighting is totally and completely normal. Does that mean we don’t address it? Of course not!)

So what are some possible “ways of escape?”

I asked the boys this question, and their first answer was “ignore it.” While this is common advice, and I know I am guilty of saying that, I have realized that it’s not really Biblical.

When someone is doing something that bothers or irritates us, we should overlook the offense, but not ignore the person! We should not shut out a difficult person but should instead LOVE them.

I know at our house, when someone is being annoying, it is often because they don’t feel included. Maybe two of the brothers are playing something that another brother doesn’t want to do. Maybe the boys are playing a game that is too complicated for a younger brother, and he can’t join in. Maybe one brother has out toys that he is playing with in front of everyone and refuses to share them. Or maybe someone is being pesky for no good reason other than to get a reaction.

Whatever the situation, the Bible is clear on how we should respond when people are treating us badly. And it’s not to ignore them. In fact, Romans 12:14 and 19-21 instructs us to treat our enemies with kindness. If we respond with genuine kindness to someone else’s rudeness, it’s really hard for the fight to continue!

We’ve all seen what ignoring looks like… A silent mouth but a smirk on the face. Refusing to respond in a patronizing way. Overlooking an offense is something entirely different. It’s making a choice not to be offended for the sake of obeying our Lord. It’s realizing that we have been forgiven SO much by God and that Jesus died to pay the price for our own rude behavior. It’s choosing to love because He first loved us.

So don’t say, “Just ignore it!” Say, “Just overlook it,” or, “I think this is something that you need to overlook,” or whatever works for you to say instead. And teach your kids the difference! Help them find a way to choose kindness.

Sometimes there are offenses that shouldn’t be overlooked. If a sibling is breaking something or hurting someone, the boys should ask that person to stop. If the person doesn’t respond, then they should come to us for help. If a sibling is doing something to bother them that they just can’t overlook, they should come to mom and dad for help rather than let the situation escalate into yelling or hitting. This process takes work, and it’s often laziness in this area that leads to fights.

Some days, the boys fight because they are just together way too much. We homeschool, and with a baby in the house we are mostly at home even when we are not doing school. Sometimes they all just need to be separated for a while. Afternoon nap time is a great time for the non-nappers to be apart from each other. When I let them be together all day, we all pay for it!

Again, it helps to know that sibling fighting is a struggle that is common to man! My kids fight over who can push the grocery cart, who can look at the Lego magazine first, who can have the last cookie, who can read the back of the cereal box, and ON AND ON AND ON. Character training is part of my job description, and it’s going to take time. We’re not going to perfect this overnight. Or ever. But by God’s grace, we are seeing progress. One step at a time…