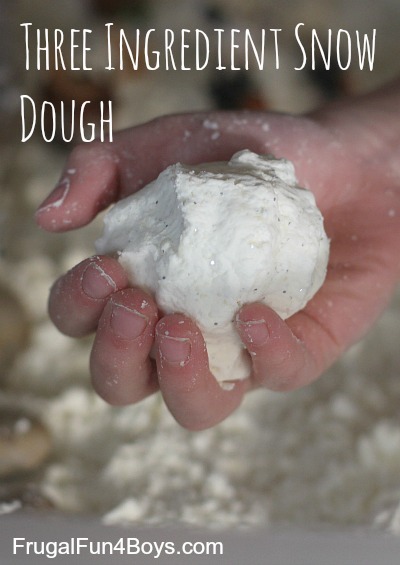 Late January and early February always feel like the blah part of winter, I think, and that has definitely been true this year! After a stomach bug and a head cold made the rounds in our house last week (well, they’re still circling but on their way out… ugh…), we needed something to improve the mood around here. This three ingredient snow dough did the trick!

I found this recipe in Family Fun magazine and modified it to fit the large quantity I was going to need to make.

To fill a shallow rectangular under-the-bed box, I used:

Stir all the ingredients together and knead it with your hands until it is thoroughly mixed. This dough does not need to be stored in an airtight container – because of the oil, it won’t dry out. Not sure how long it lasts, but I think it will easily last until you are ready to throw it out anyway. 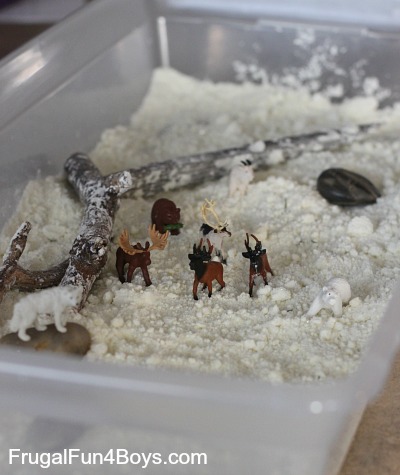 This dough is really a fun sensory experience! It’s soft and crumbly, but when you squeeze it, it crunches like real snow. You can form it into a snow ball or build snowmen out of it and then crumble it up again. The magazine said that you can add more oil to make it less crumbly, but the boys liked it the way it was.

We added some sticks, rocks, and animals for play. 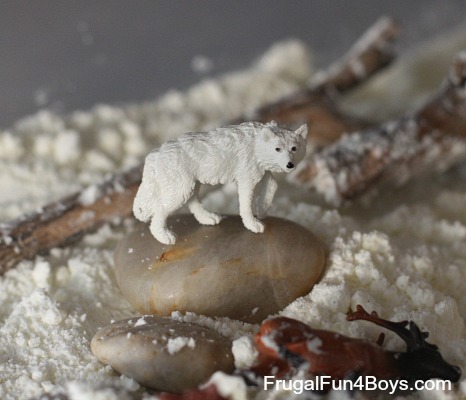 Gresham (7) and Owen (4) have spent a LOT of time with this snow dough! They end up getting a little on the floor, but it’s easy to clean up. Jonathan (2) is another story! He absolutely loves the feel of the dough. After he explored it for the first time, he stood up and announced, “FUN!” However, at his age, it’s hard to keep the dough in the box and off his clothes! If you’re going to do this activity with 2’s and 3’s, I would recommend putting an old sheet down under the tub for easy clean-up, or play with it outside. I would also do old clothes. A little on their clothes is not a big deal, but since there is so much oil in this, I’m not sure that a toddler’s clothes will come totally clean. Thankfully, most of Jonathan’s clothes are in the “old play clothes” category since multiple other boys have worn them! 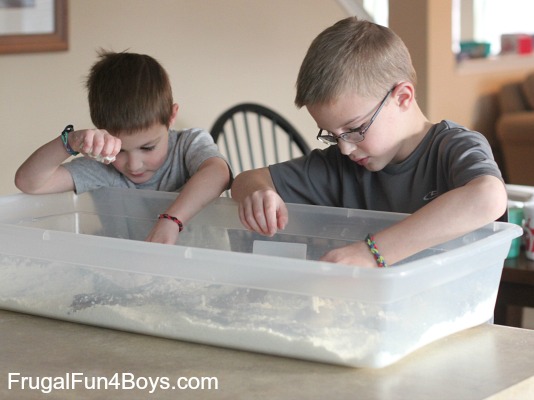 Because vegetable oil is yellow, it makes this snow a little yellow-y! If yellow snow bothers you, you could always use baby oil. It wasn’t worth the extra purchase for me, and the glitter does help with the yellow look. 🙂