Boys will be boys… but what does that even mean? Is it a helpful thing to say, or not?

As a mom of four boys, I can tell you without a doubt that my house is different than a house full of girls would be. Janie is only 20 months old, but her presence has had a balancing effect on our home. She’s spunky, energetic, and loud, but she is definitely a girl!

Before writing this post, I googled “boys will be boys” just to see what is out there. My search brought up so many articles filled with nonsense and psychobabble that it would make your head spin. In attempting to allow every expression of gender freedom, our culture has become thoroughly confused. Post a photo online of your son playing with a doll, and you’ll get applause. Show your daughter engineering something, and more praise. But if your boy really wants to be a scientist and your girl enjoys caring for her doll? You must be pushing them toward those stereotypes. 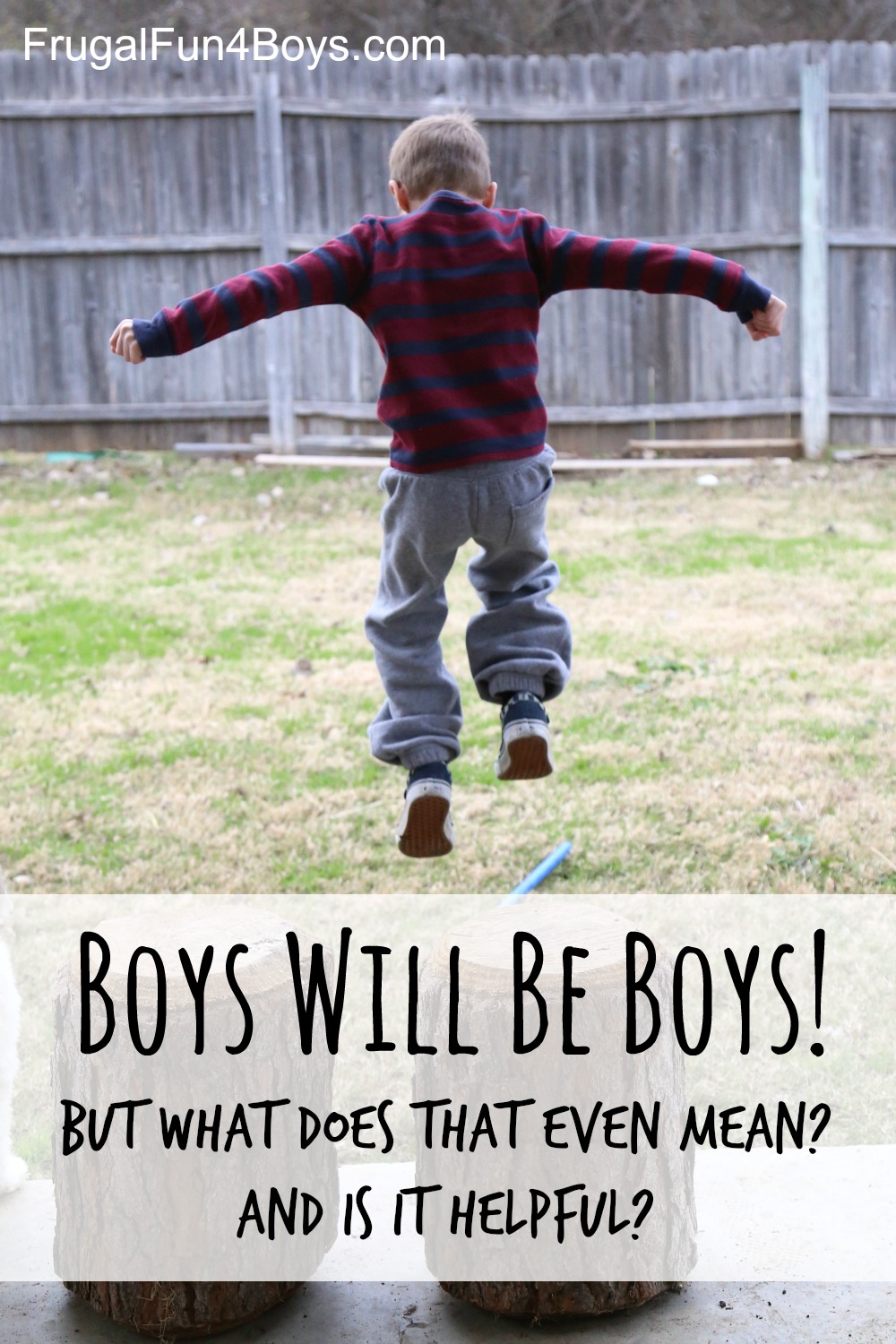 It’s true that boys can play with dolls and girls can become scientists, but these are side issues to the real heart of the matter, which is that God created two genders that complement each other. Our boys do not have to become a “man’s man” in order to fulfill the role that God has designed for them. They may not care about football or fishing and may grow up to become a chef – perfectly acceptable! But they will grow up to be men and fathers, not women and mothers. They will have the task of providing for and leading their families, and that task may require a certain strength that was actually present in the boy who “never would sit still” or “was so strong willed” and just needed some refining and the work of the Lord in his life.

As a mom of boys, I think that it’s important to get this one right. We can easily drift to two extremes when raising our sons. One is to say, “Oh well, boys will be boys!” as we overlook our son’s rude, loud, or inconsiderate behavior. The other is to take up the constant cry of “Boys! Stop it!” as we correct them every time they jump off the curb, hit each other with pillows, or do something gross. Being a boy is not a license to do things that are wrong. It’s not an excuse to be rude, self-centered, or lazy, contrary to what the characters on popular TV shows might lead us to believe. However, being a boy who acts like a boy is also not a crime, and the sooner we learn to appreciate their temperaments, the better.

Here are some things that we have found helpful for both letting boys be boys, but also doing our part to help them grow into responsible men.

NOTE: Of course it’s not true that boys ALWAYS display every one of these behaviors or needs while girls NEVER do. That is not the point of this article at all! Rather I am writing about some of the general differences between boys and girls that affect parenting.

Boys need someone to hold them to a high standard as they transition to being young men. Unfortunately, our society provides way too many examples of the stupid male. The dumb husband on TV is always trying to get out of work so he can get out on the golf course and do what really makes him happy. Even though we don’t watch those kinds of shows, laziness and a desire to just do what’s fun comes naturally. Our sons need us to tell them that this is a lie. God has created work for our good, and doing what we want all the time will not actually make us happy or fulfilled. Christ set the perfect example as He lived His life in service to others, even washing the feet of His disciples. We need boys who will grow to be men who are servant leaders, faithfully following the Lord.

My husband is the director for the 3rd-5th grade boys Awana club at church. He holds the standards high and won’t let the boys run in the halls or jump up and slap at the decorations on the walls, etc. (If you’ve worked with this age group, you know!) One of our friends told us that her son asked one day, “Am I a young man?” They told him they guessed he was. He said, “Mr. Dees tells us we are young men. And I like that.”

Hold the standard high for your young men! Let them know that men do what they say they will do. Tell them that men take responsibility for their mistakes. Men are willing to be courageous and try something hard. They persevere when the going gets tough and rely on the Lord for wisdom and strength. Treat your sons like the men they are becoming, and they will take pride in assuming that role. 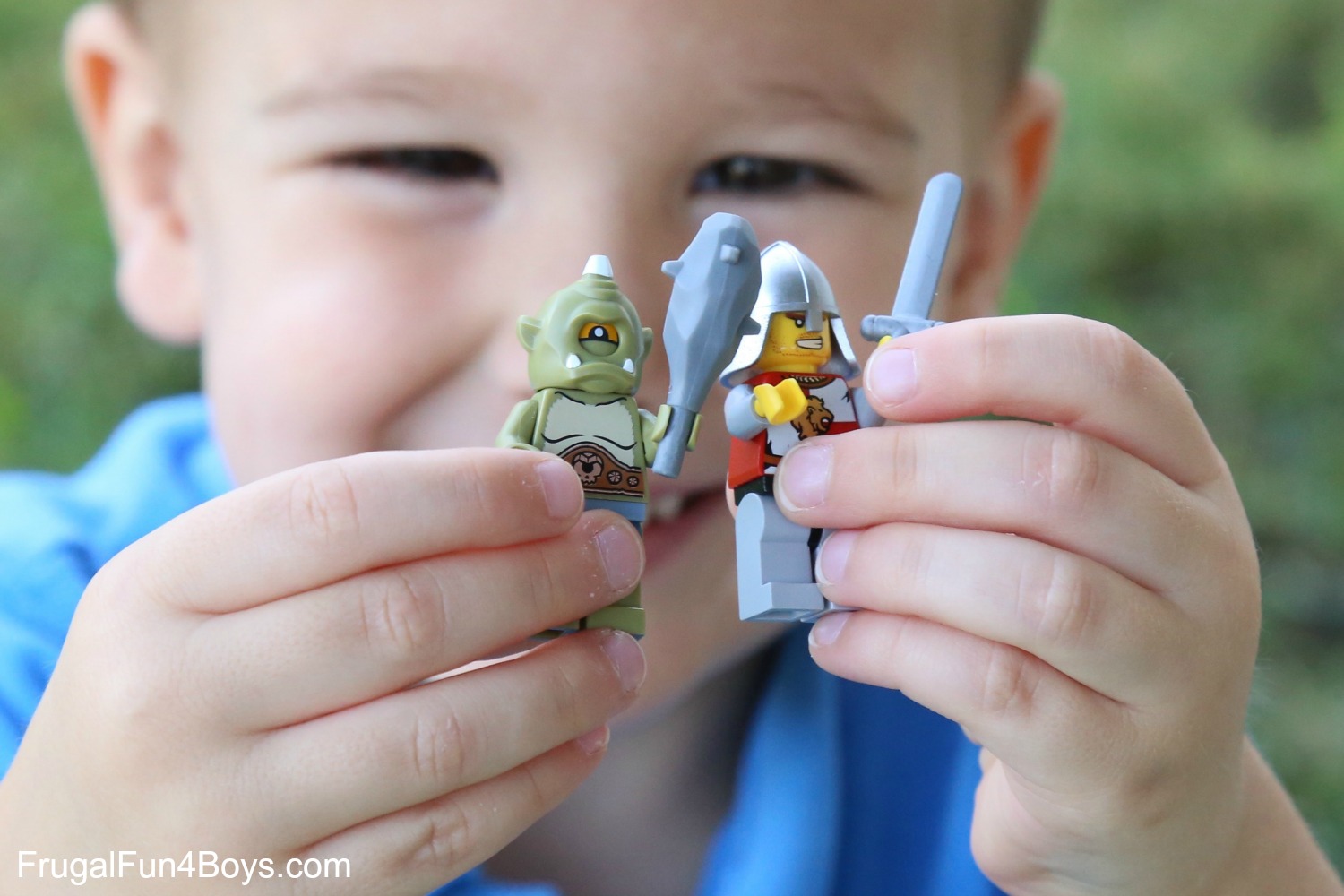 Boys need us to teach them about the appropriate use of force and the appropriate way to handle their anger. I have often heard in Christian circles that boys are wired to defend and protect. I would say that this is partially true. God’s design for men is that they would work and be the keepers (protectors) of their families, and they are created by God to be able to fulfill that role. However, our world is marred by sin and the good things created by God have been distorted. I know the boys in our house display plenty of desire to attack and destroy, rather than just defend and protect! They need us to shepherd them in this area, and it takes lots of time and lots of conversations.

Boys need a real-life reason for achievement. It’s not that this isn’t true for girls! But I think it’s true to a greater degree for many boys. Boys are not necessarily motivated to have neat handwriting simply for the sake of neatness. They are often less embarrassed by wrong answers, and bad grades don’t phase them quite as much as girls. Girls tend to value academic accomplishments more than boys do. Girls are also more likely to please their teachers simply for the sake of pleasing them, whereas boys are less likely to care what people think. Moms can look at their son’s sloppy school work and think, “Where have I gone wrong?” We have one son who has terrible handwriting, little desire for good grades, and an overall lack of academic focus. We are certainly addressing this. But at the same time, I have to keep reminding myself that this same child is capable of helping other people (and doing it well!), working hard, and stepping up to responsibilities when needed. Grades are helpful, and yet grades are not all there is.

Boys have a need for physical labor and exercise. We have seen this to be especially true as the boys get older. I had always assumed that they would grow out of the “wiggly little boy stage,” but they haven’t! Boys often have a lot of energy. I had always figured that we would increase the academic rigor of our homeschooling as our oldest son got to junior high. Well, now he is in 7th grade, and yes, his academic life has become more rigorous. At the same time, however, he really needs opportunities to get outside and help with the landscaping at church, rake leaves with a friend to earn money, or ride his bike. Lazy days at home are not generally a helpful thing.

And of course this is true for younger boys as well. Tonight, in fact, I had a whiny four year old who just wanted to lay around and be grumpy. I asked him if he would please feed the dog now that he is turning four in two days. (This is usually a task for his older brother.) He was so proud to be doing a big kid job. Then he helped me take down the Christmas decorations and dust the shelves. Physical tasks with real tools (dusting spray!) transformed him from a whiny lump to a happy and energized little boy! 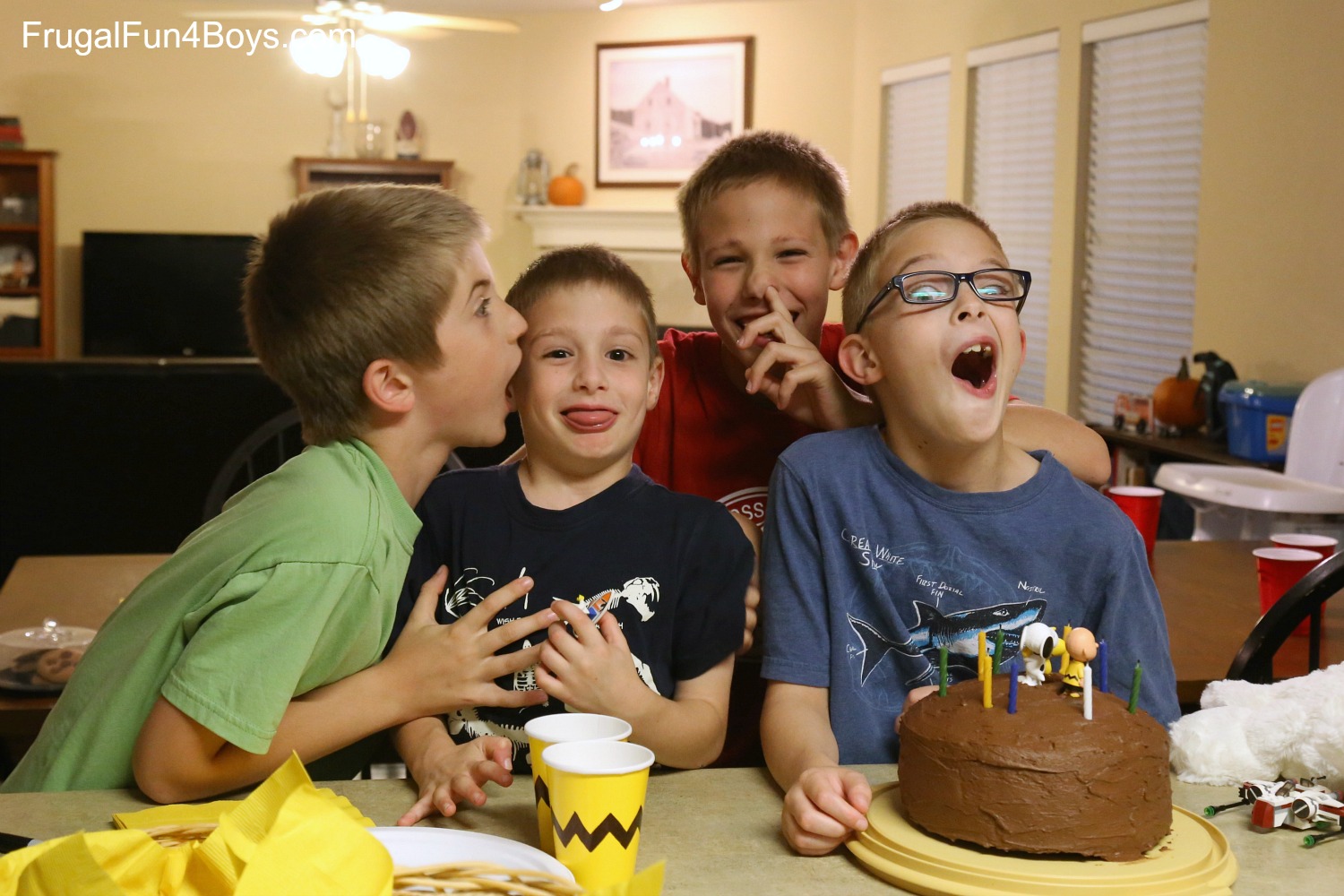 Boys have a love for things that shoot, fly, and explode. Yes, girls love these things too. But at our house, Nerf, chase games, and wrestling are daily main events. One of our sons is quieter by nature and spends hours drawing. And what does he draw? Endless pictures of dragons, little stick figures with swords, Star Wars battles, and superhero scenes. His drawings are almost exclusively all about action. Boy art may not be as pretty and true to life as art done by girls, but it’s amazing how they convey action in ways that I would never think of!

Absolutely correct your sons for anger, revenge, and violent behavior. Guard against developing an appetite for violence and destruction through the media they consume. But at the same time, don’t assume that every wild act is an act of violence or aggression. Boys love energy and excitement! Often that is all it is. Teach your boys about the appropriate time and place for wrestling, etc. Provide opportunities for rambunctious play, but expect them to have self control when it’s not the right time. (Loss of privileges is a good consequence for a lack of self-control.)

Boys need for us to enjoy them just as they are. Boys need us to love them, even if they are louder or stinkier or less organized than we would prefer. They need us to appreciate the things they value without always trying to change their values to match ours. I’m not referring to moral values here, but to interests and an approach to life. Maybe walking directly through the puddle is more fun than it looks! Maybe I can’t relate to the boys’ constant need for wrestling, but maybe I can stop acting exasperated over their gravitation towards physical play. Boys will be boys… which is a good thing, because they are growing up to be men!