Raising boys has been, in my experience, similar to raising puppies in many ways! We have constant muddy “paw” prints on the floor, boys are always tumbling over each other, we have balls in the house, and lots of things get broken. Joking aside, though, we have another problem similar to man’s best friend… the alpha dog. It can be a challenge to teach a boy who thinks he’s on top to have proper respect for authority. 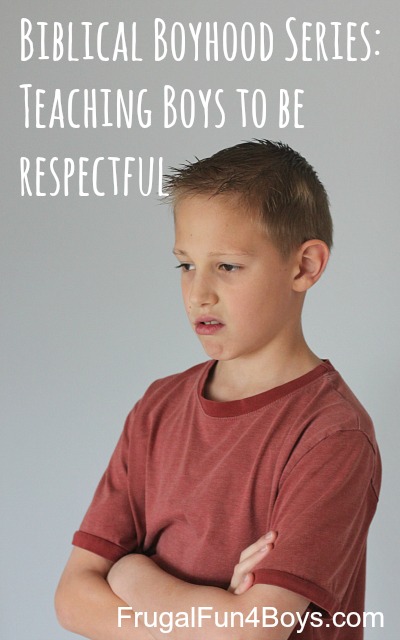 I actually pulled out the dictionary last week and looked up the word “respect” with my boys! It said, “To feel or show deferential regard for; esteem. Willingness to show consideration or appreciation.”

In my house, no one wants to defer to anyone else. Some days feel like a power struggle to see who will be the alpha dog. The boys are tempted to think that they know more than I do and should not have to listen to me unless I can adequately prove to them that I am right. We know that our sons should respect us as parents, and we know that they should respect the other authority figures in their lives, but how do we get there? I have a second post coming in which I will discuss some really practical ways to teach respect, but first, we need to understand the issue of respect.

Respect starts with a correct view of God.

We must teach our children to fear the Lord. Without a fear of God, our children will respect people that (in their opinion) deserve respect and will disrespect others. This is not a Biblical view – the Bible makes it clear that He has put human authority into place, and that our children need to respect us as their parents and respect their teachers and coaches even when we as adults are not perfect. When we have a proper fear of God, then we are willing to submit to the authority structure that He has put in our lives.

Proverbs 1:7 says, “The fear of the Lord is the beginning of knowledge; Fools despise wisdom and instruction.”

In the book of Proverbs, the term “fool” is used in a moral sense. The fool is a person who does not submit to God’s authority is his life. By contrast, the person who gains knowledge and wisdom is the one who fears the Lord. He respects God and understands God’s proper role as the ultimate authority in his life. And he does this joyfully because He understands the depths of God’s wisdom, goodness, and love.

As I explained these truths to my boys, I was struck with the fact that for them to truly fear God, they have to grasp that God is BIG! And I need to be modeling that to them.

How big is God to you?

Is God’s wisdom wiser than the wisdom of the world? How do you respond when life gets hard? Is God good and lovingly in control of all things, or do your complaints betray how you really think about God? Is God’s word your ultimate and trusted source of knowledge? Do you want your children to respect you because of the sting of their rude comments, or because you understand their need for a correct relationship to God? Is it because you know that they need to understand that God is holy and in charge in order to see their own need for a Savior, or is it nothing more than embarrassment over their rude words?

These are major issues to wrestle with, because our view of God will heavily shape how our children view Him.

In 2009, our family was hit with a series of circumstances that were extremely unpleasant from a human perspective. Our third son Owen was born in May, and when he was nine days old, my husband lost his job. Throughout the next few months we dealt with unemployment and the granting and then loss of unemployment benefits. I had terrible carpal tunnel syndrome that started during pregnancy, and it didn’t go away after delivery. I was sleeping very little between the pain of carpal tunnel and the demands of caring for a newborn. Unfortunately, since we had no insurance (or income), I had to delay seeing a doctor. My music teaching job made the carpal tunnel worse (because of playing and tuning violins and cellos), but I had to keep teaching as it was our only guaranteed income source at the time school started. Owen had horrible infant reflux and refused to eat, and we couldn’t take him to the doctor either.

But as we emerged from that trial, the greatness of God came into view as much larger than our earthly concerns. We saw the depths of His wisdom as He wove together circumstances that we could never have managed on our own. One example – I finally took Owen to the doctor during my husband’s first week at his new job (his new, amazing, much better job that we didn’t deserve), knowing that his insurance had not started yet but figuring that we would just pay for the visit. What I didn’t realize was that Owen’s reflux diagnosis would involve a series of appointments and tests in the future, and that this visit would make reflux a “pre-existing condition” that the insurance could refuse to cover. However, when Jordan’s insurance started up, it was retroactive back to his first day with the company! Several months later we received a letter in the mail asking questions about the date of Owen’s diagnosis, and we realized how close we had come to having to pay thousands of dollars out of pocket. Only by His grace…

Throughout that trial, there were many times that we unfortunately gave into the temptation to doubt God’s wisdom and goodness, but He while we were doubting, He was at work for our good and His glory. Our circumstances cannot dictate our views about whether God is worthy of our respect or not. We must believe what He says about Himself in His word instead!

A correct view of God runs contrary to the beliefs of our culture. It is common for people to define God by how they would like to see Him rather than how He has revealed Himself in the Bible. It’s also common to live without regard to what God says about life. How can we teach our kids to respect God and human authority in the midst of a culture that denies His authority? Here are a few ideas, and more practical ideas will follow in Part 2.