A couple weeks ago, I was sitting in the living room during afternoon nap time. The two younger boys were napping, and the two older boys were riding bikes outside. Suddenly, the quiet of the afternoon was interrupted by a crash against the door that goes from the garage into the house. I figured that someone accidentally ran into it. Then I heard the crash again. And again. This was not sounding like an accident!

I went out to the garage and asked for an explanation. Apparently, the boys were chasing each other on their bikes and the garage was the “safe zone.” One of them sped into the garage and couldn’t slow down in time and crashed into the door. That was sort of funny, so then they did it a few more times. We talked about what could have happened to them, their bikes, or the house as a result of that activity, and I instructed them not to do it again.

As a mom of four boys, this sort of scenario plays itself out in my house ALL the time. Every day, I seem to be dealing with impulsive behavior and a serious lack of self-control! 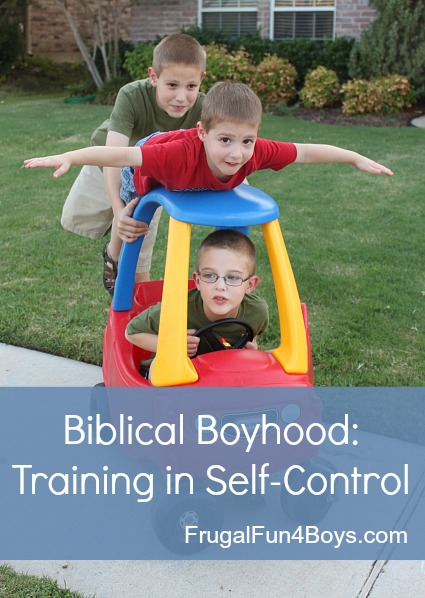 After the garage door incident, I called a friend of mine who has several boys, both grade school age and high school/college age. I asked her when I should be expecting my 10 year old to develop some measure of common sense, and she responded with a hearty chuckle! She said that I need to keep in mind that boys truly do not develop impulse control until they are in their 20’s. (Nooooooo! Tell me this isn’t true!) Boys are often focused on having a good time. Unfortunately, in the midst of this “good time,” people end up getting hurt and things end up getting broken.

Does the impulsive nature that some boys seem to possess mean that we don’t expect them to use good judgment or have self-control? Absolutely not! We must teach our sons to be self-controlled. It is realistic to expect that this endeavor is going to take quite a bit of our time and effort. Somehow though, the assurance that my boys’ crazy behavior was completely normal enabled me to step back and approach the task of training them with a calmer (and less frustrated!) heart.

After talking to my friend, I realized that I need to zero in on determining whether the boys’ behavior is truly foolish, or merely childish.

Childish behavior is the things that children do because they are children. Things like spilling juice while learning to pour, approaching the garage going too fast on their bikes because they are not judging their speed correctly, or my preschooler drawing a picture on the grocery list because he didn’t realize it was the grocery list. Foolish behavior, on the other hand, is choosing to deliberately ignore instruction. Foolishness is hearing mom or dad say not to ride bikes in the garage because of the possibility of crashing and thinking, “I know I won’t crash. Riding in the garage is fun, and I’m going to keep doing it!”

The Bible has a LOT to say about the fool: (These are great verses to read and discuss with your sons!)

“The way of a fool is right in his own eyes,

But a wise man is he who listens to counsel.”

“A wise man is cautious and turns away from evil,

But a fool is arrogant and careless.”

“A fool rejects his father’s discipline,

But he who regards reproof is sensible.”

Is a person who lacks self-control.”

Foolishness is a problem because it is ultimately rebellion. A child who is acting foolishly is not submitting to God’s rule over him or to his parents as God’s instruments in his young life.

When does behavior cross the line from childishness to foolishness? Behavior becomes foolishness when the child has been given clear instruction that he is able to understand and put into practice at his age and maturity level, and he chooses not to obey. In real life, however, it is often hard to tell which is which! One thing that my friend reminded me is that consequences for a behavior do not always need to be decided on right away. This is true. Because of the exasperating nature of many of the things that boys think of to do, it’s easy to either over-discipline or to spout off threats which we never act on. Sometimes, it’s best to take a break, PRAY and ask God for wisdom, and then re-visit the issue. God will not withhold wisdom from us as parents! He will make our paths straight (Proverbs 3:5-6)! After some time to think and pray, we might realize that the child was simply acting childishly and needs some instruction about what to do next time. Or, we might decide that the child truly has been told not to do whatever it was and needs some accountability. “Son, I told you yesterday that you may not speed into the garage on your bike. Because you chose to ride in the garage while you thought I was not watching, you may not ride your bike for the next 5 days.”

In addition to instructing our children in practical living (we don’t jump off the back of the sofa!) and dealing with clear disobedience, it’s also important to remember that self-control is a fruit of the Spirit (Galatians 5:23). So when our children fail at self-control, which they will do again and again, we need to point them to Jesus, who paid the price for their disobedience on the cross! The ability to demonstrate self-control ultimately comes from a heart that God has made new. Thanks be to God for His grace!

If you have a child who seems to continually struggle with behavior, don’t despair! It’s the perfect time to point them to the cross. For more encouragement with that, check out this post.

You can find the rest of the Biblical Boyhood Series here:

Part 1: The Heart of a Hero

Part 3: Setting an Example of Biblical Speech – A Challenge for Moms