I used to hate word problems in math when I was growing up, mainly because it was often hard to figure out what to do. Isn’t that usually the challenge with word problems – figuring out what operations to use, and which numbers to use them on?

We have been using Making Math Meaningful for our boys, and I really love how this curriculum has helped us learn how to attack word problems. Both of my older boys are better at them than I was growing up, and I attribute this to the approach that we have learned in MMM. 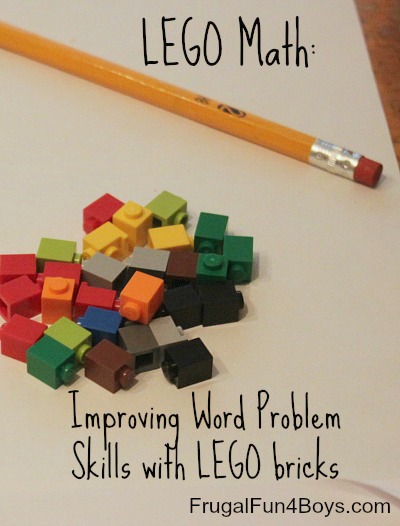 Think about this problem:

By assigning letters to the parts, we can write some math sentences.

These sentences would also be true:

So, to find either of the parts, we subtract the other part from the whole. Then what is left is our answer.

What are we looking for in the word problem above? A part or the whole?

We’re looking for a part, so we take the whole amount of cookies and subtract the other part.

Anyone still with me? (I hope so!)

“Farmer Brown has many cows. He has 45 Holstein cows and 39 Jersey cows. How many cows does he have?”

In this problem, we know both of the parts. We’re looking for the whole. So we add.

Understanding part-whole relationships is so important for kids to understand, but it’s a challenging concept, especially when you start changing the order around (i.e. whole – part = other part). So we pulled out our LEGO® bricks to help make this idea more concrete!

I made Gresham some word problems such as:

Then, he wrote math sentences. You can see his below. 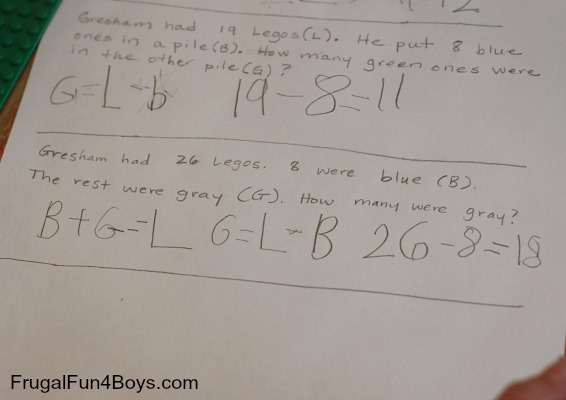 I set up the problem on a LEGO® base plate as well. What is known (how many blue bricks) is visible. The gray bricks are hidden under the red bowl so that Gresham could check his work when he was done. 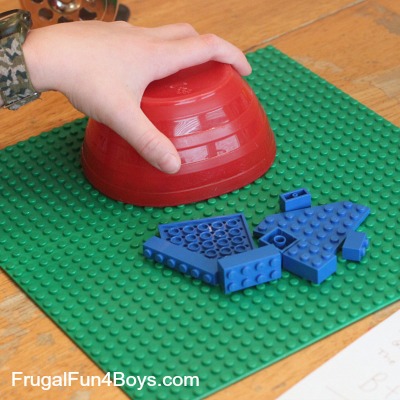 Was the answer correct? Yes it was! 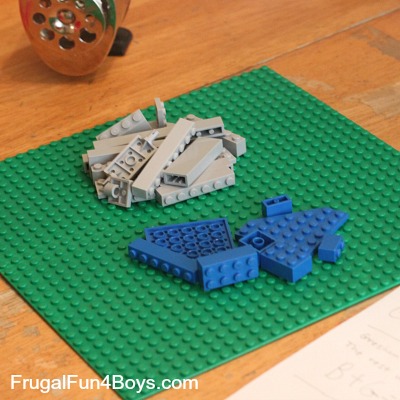 For problems like this, Gresham kept wanting to add instead of subtract. He would add one part (blue bricks) to the total number of bricks and then get a really big number. We kept talking about how it didn’t make sense to have an answer for one part that was bigger than the whole.

This concept is not mastered in one sitting, but it is so worth it to persevere! We have spent about a month on part-whole relationships – not just with LEGO® bricks, but with pages in his math book as well. To be honest, I thought this was a little too abstract when we first encountered this lesson in Aidan’s 2nd grade math book. But although Aidan cried over this concept in 2nd grade, he got it a little better in 3rd grade, and by 4th grade he had become a strong word problem solver. I was impressed. He just finished 5th grade. If he’s stuck on a word problem, I can ask him to identify the parts and the whole, and it helps every time!

More LEGO® word problems to use with your kids:

“Owen organized his 45 LEGO® bricks (B) into piles of red (R) and yellow (Y). He had 23 bricks in the yellow pile. How many red bricks were in his red pile?”

“Gresham got out 18 bricks (B) for building houses. He found 10 doors (D) and the rest were windows (W). How many bricks were windows?”

Be sure to check out the rest of the Lego Math series!

This post is part of LEGO® Week on Toddler Approved! Be sure to check out all the other LEGO play and learning ideas that other bloggers are posting this week! 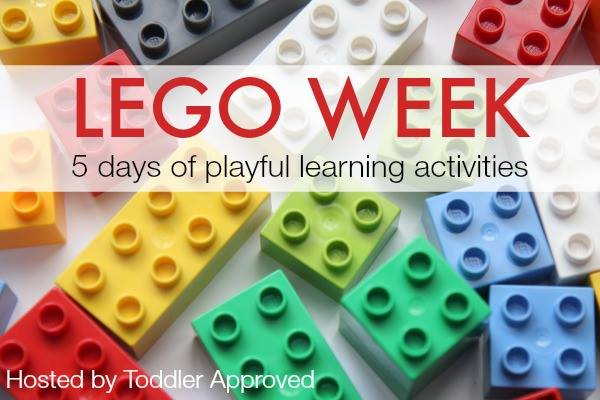