It’s summer vacation time – are your kids fighting yet? 🙂

Since we homeschool, we pretty much fight year round.

Seriously though, I think that sibling fighting is one of the most exhausting parts of motherhood. This is one of those areas where we are in it for the long haul. It helps me to think of character development as an ongoing, long-term pursuit. Motherhood involves the day-in-day-out modeling of what it’s like to live with other people. There is no replacement for speaking kind words ourselves, demonstrating patience and love and the other fruits of the Spirit ourselves, and modeling how to humble ourselves and apologize when wrong. I do not say this because I have achieved perfection in this area but because I believe God wants us all to actively grow in our ability to love and shepherd little people who can sometimes be very difficult!

On the practical side, here are some tricks that have been helpful for me in facilitating sibling cooperation! 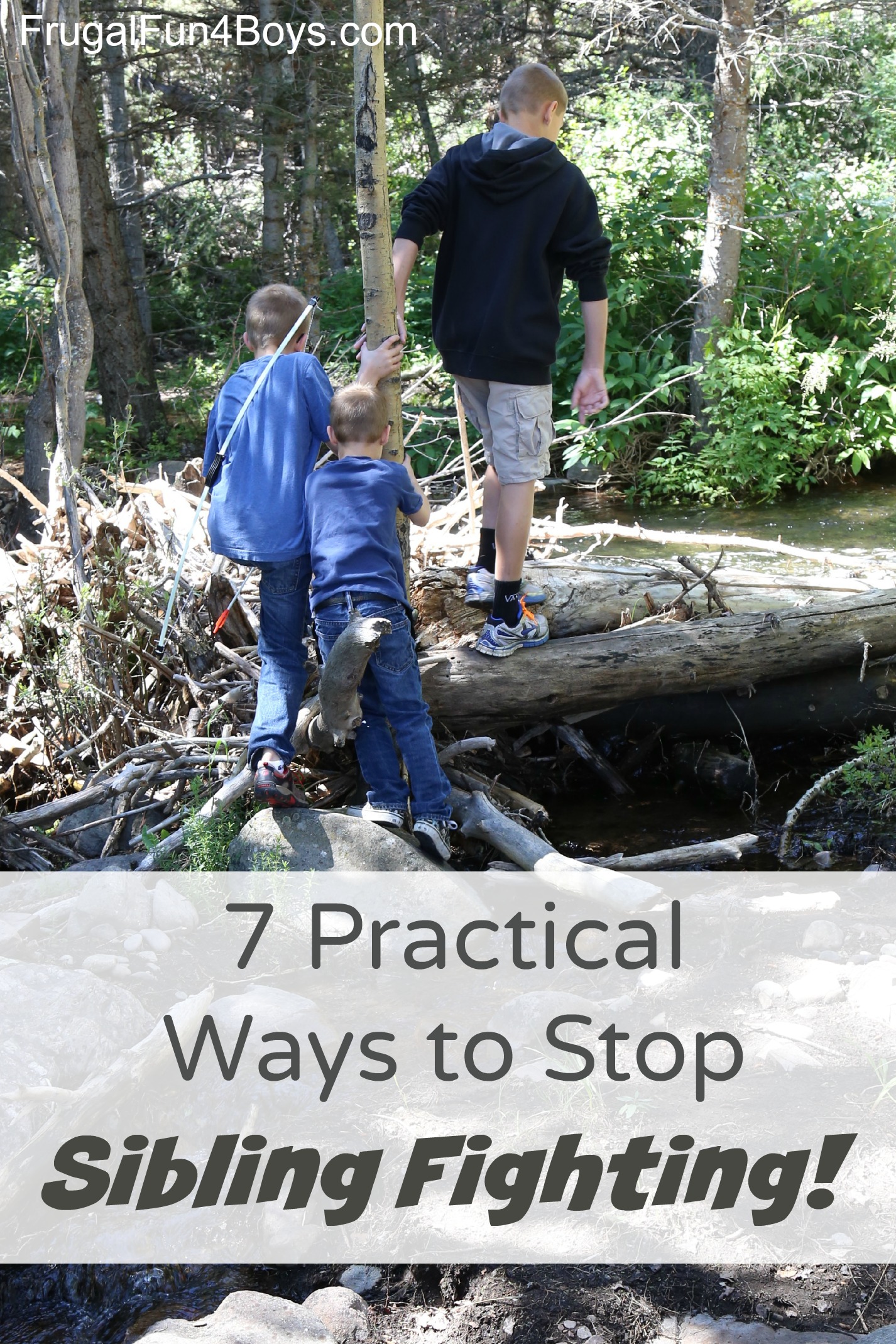 Keep them busy. I believe in “letting kids be bored” and not entertaining them every minute so that they will learn to be creative. I also believe that it’s important not to over schedule kids. But in a house with five kids, we also need a certain amount of structure. Too much down time = too many pillow fights and wrestling matches and a whole lot of bickering.

Ask the kids to think of a solution. This little trick has been helping us quite a bit. Instead of saying, “Please share!” or “Stop fighting!” I have been saying something like, “Boys, both of you are wanting to play with the Playmobil Jeep right now. What solution can you think of?” Then they say something like, “I could let him have it when I’m finished with it,” and I remind them to take a reasonable turn and then pass it on. I think this works because it’s so much more specific than “please share,” and it gives them something to act on.

Teach kids to apologize the right way. Relationships need reconciliation when something has gone wrong. A half-hearted “I’m sorry” in a monotone voice does nothing to resolve a conflict. Teach kids that their apology should include:

When we take the time to have our kids go through this process it really does help to restore relationships!

For more on effective apologies, check out this fantastic article on cuppacocoa.

House Rule: In our home, we include everyone who wants to be included.

We have so many fights that start with one child reading a favorite book and another child asking to look at the book too and the first child says no (or the LEGO catalog – that catalog brings out the worst in everybody!). Or one child bringing down a tub of Playmobil and another child asking to join in, and the first child says no.

It’s just not worth it to fight over someone wanting to play with you, especially since they will most likely lose interest in 5 minutes anyway! We do have quiet time in the afternoon where the boys have the opportunity to play or read alone. But at other times, the boys need to include a brother who wants to play too.

I don’t always enforce the reverse of this (someone wants to play a game and wants me to make their brother play too). It’s pretty hard to make someone play something and actually do it right, if they don’t want to. But as they get older they can certainly learn this skill. I will sometimes ask my older two (age 8.5 and almost 12) to play soccer with their 6 year old brother so that he can practice for his game, for example.

Jump Ball: For all the little decisions that have to be made (Which movie? Which game?), try having a JUMP BALL! I love this idea from I Can Teach My Child. Having procedures in place goes a long way in preventing fighting.

Say five kind things about the person you hurt. We did this the other day. And I insisted that they be genuine, or as close to genuine as possible. Not, “I love brother because he has brown hair.” It had to be specific. For example, “I love the fact that my brother makes all of us laugh with his funny faces.” It’s really hard to stay mad at someone when you just spent several minutes thinking of all the positive things you can about a person!

Kindness Car. Here’s a fun way to jump start acts of kindness within your family! It can be a Kindness Car, or really any object. 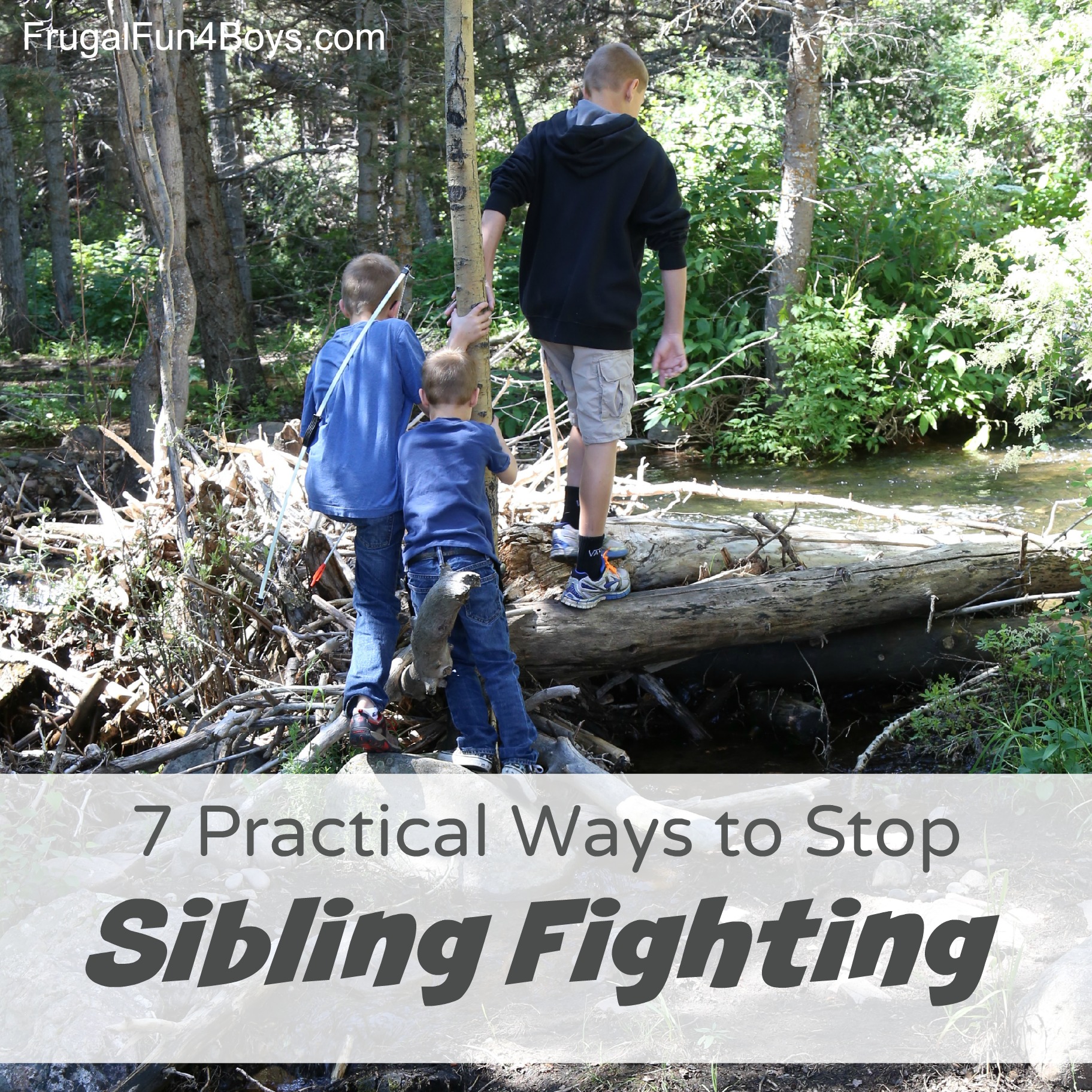