My husband and I have been working together to study the type of character that God wants our boys to have. After all, we have four of them! We are responsible before God to teach our sons to walk in His ways. This post is the first in a series on Biblical Boyhood. I’ll be writing about what we have learned in our study on heroic character, fighting and retaliation and handling bullying situations (and this list may grow as I study more!). 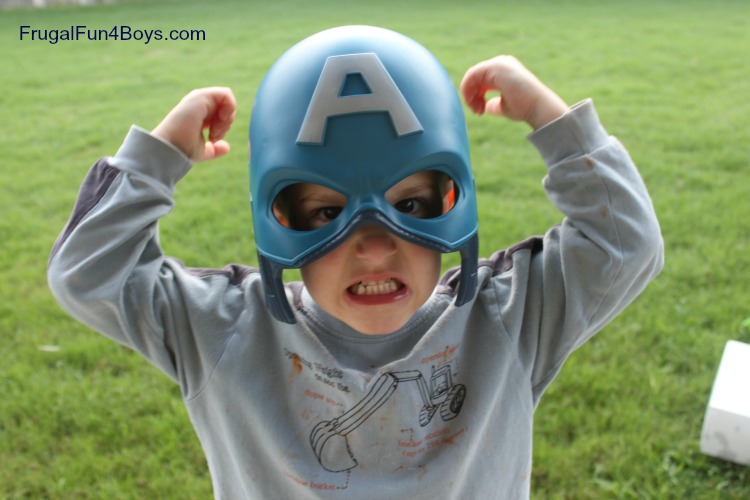 Do your boys like superheroes? Mine do! They LOVE to be dressed up. I never knew that boys would like to play dress-up so much. They love to pretend to be someone. They love to wear a superhero mask and cape, or a pistol on their waist, or a coonskin cap. This series is not going to be about making boys more calm, or quieter, or not allowing boys to play with weapons. (In fact, I addressed some of our view on toy weapons here, so you can check out that post for more thoughts if you’re interested.) Rather, we want to explore the character qualities that God values. We want to learn what God considers heroic.

Before writing this series, we listened to sermons and read 1 and 2 Timothy and Titus to see Paul’s instructions to a faithful man. In this post, I want to address two qualities that come up again and again in scripture concerning a godly man: self-control and servant leadership.

Energy, wrestling, and adventurous acts are a given! However, there are two types of people in scripture – the wise and the foolish. The fools has said in his heart, “There is no God.” (Psalm 14:1) He lives his life as his own authority, doing whatever seems good at the time. The wise lives life to the fullest, but willingly submits to the constraints that God has set forth.

“Like a city that is broken into and without walls is a man who has no control over his spirit.”

“He who is slow to anger is better than the mighty and he who rules his spirit than one who captures a city.”

Also consider what Paul said when writing about the qualifications of an elder in the church:

“For the overseer must be above reproach as God’s steward, not self-willed, not quick-tempered, not addicted to wine, not pugnacious, not fond of sordid gain, but hospitable, loving what is good, sensible, just, devout, and self-controlled, holding fast the faithful word which is in accordance with the teaching, so that he will be able both to exhort in sound doctrine and to refute those who contradict.”

Self-control requires a great deal of strength. Any old fool can throw a fit, but it takes real strength to exercise self-control! Our boys need to be ruled by the Lord, not by their emotions. They need to be able to harness the heat of the moment and act upon what they know to be true, not what they feel like doing.

One of my boys strongly desires to be a leader. He really enjoys making decisions and telling others what to do. Another one of them will probably enjoy a life in the background because that’s more his nature. Whichever their inclination, God desires that all men have the heart of a servant.

Jesus Himself set the example of service.

But Jesus called them to Himself and said, “You know that the rulers of the Gentiles lord it over them, and their great men exercise authority over them. It is not this way among you, but whoever wishes to be great among you shall be your slave; just as the Son of Man did not come to be served, but to serve, and to give His life a ransom for many.”

No one enjoys a bossy leader! No one wants to play with the child who always has to be the “captain” or “commander” in EVERY game, or insists on taking the first turn. This extends into adulthood. No one wants a boss who barks out commands without taking the time to listen to those who work under him. My older two boys are learning to help with the younger two. When Aidan has been asked to help entertain Owen, his job is not to boss Owen and order him around. Rather, we are working with him on learning to serve. He can ask his brother what book he would like to have read to him. He can play a game that he knows his brother will enjoy. He can fix his brother a snack or help him put his shoes on.

However, there is a time for being a leader by giving commands. If my boys are out riding bikes, and Aidan notices a thunderstorm brewing and tells everyone to head home, I hope that they will listen to him. I know for a fact that they will be much more likely to listen to him if he has built a reputation as a servant leader who is concerned about their welfare rather than a self-serving leader on a power trip.

Is it hard to exercise self-control? Is it hard to live as a servant? Yes. Impossible, even. That’s why Jesus came to die for our sin.

Remind your children often of the gospel. Jesus paid the price for our sin so that we don’t have to live as slaves of it! 2 Corinthians 5:17 promises that when we know Christ, God will give us new hearts and make us into new creatures who are able to serve Him. 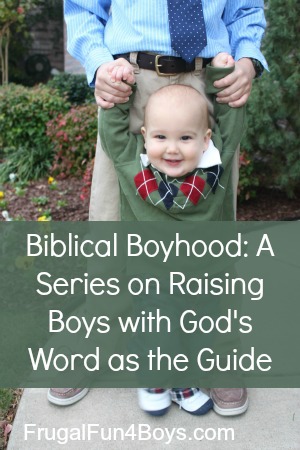 If you enjoyed this post, you might want to check out the rest of the Biblical Boyhood series: