Here’s a HUGE collection of screen-free activities and boredom busters for kids! Projects, crafts, games, we’ve got you covered. There are so many interesting things to do in the world besides sit in front of a screen! The point of this post is to give you quick ideas that will inspire kids to get up and get busy doing something, especially older kids (ages 8-12).

Now to be clear, we are not anti-screens here at this house. We have a daily TV hour, and there are times when the Texas weather is either extremely hot or cold, and we do more Wii or TV than usual. It’s also true that all screen time is not necessarily equal. There’s a difference between editing a stop-motion movie and vegging out in front of a cartoon marathon or playing hours of video games. It’s not good to cultivate a lifestyle of entertainment however, and so many activities involving screens quickly become addictive.We also notice an increase in aggressive and restless behavior after too much time spent being entertained. Being productively busy, on the other hand, leads to happier moods and growing brains!

Play a game! Pull one out of the cupboard, or make your own. Here are some ideas to get you started! 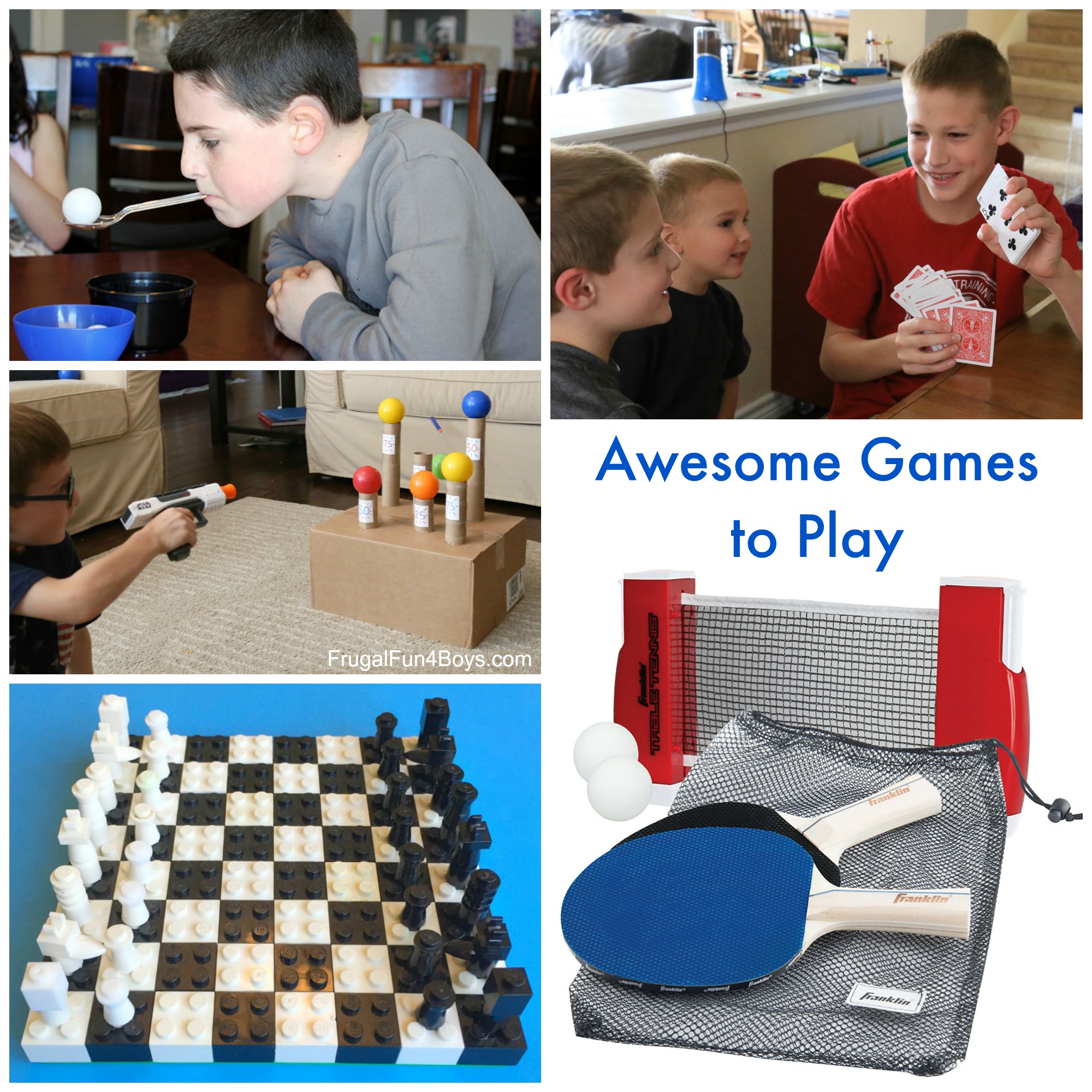 Organize a game of flag football at the park. You can order a set of flags inexpensively on Amazon.

Design your own chess set. Make the game board out of poster board. Make the playing pieces out of bottle caps, rocks (paint them?), or LEGO bricks. Or think of another material!

Create a race track for bugs. Roly polies are good for racing! Use cardboard to make race lanes, and then let your bugs go!

Play LEGO Games! Here are 10 LEGO party games that you can play with the bricks you already have.

Another LEGO idea – Build a LEGO foosball game. Use a marble for the ball.

Make your own Nerf targets! Here’s a collection of 10 fun Nerf games to make and play.

Learn how to play Drop Dead. It’s not as bad as it sounds, LOL. This is a fun dice game.

Create a board game. Use a sheet of poster board for the game board, and draw your own game. Create a pathway with squares and have players roll a die to move. Use little toys for the game pieces, or make your game pieces out of clay or wooden pegs. So many possibilities!

Plan a Minute-to-Win-It Game Night. Here’s a collection of 10 awesome games to try with a list of supplies needed and more.

Learn some Kendama tricks. Here’s a post on getting started with Kendama tricks, and there are tons of instructional videos on YouTube.

Build your own Ladder Ball game with PVC pipe. This is fun for kids of all ages!

Grab some dominoes and build a domino run. How long can you make it? If you don’t have dominoes, think of what else you can build with. Keva blocks work well, or even stacks of LEGO bricks.

Make your own Carrom Game. This is similar to pool, except that you flick the playing pieces into the pockets.

Here’s some inspiration for fun homemade crafts and toys. 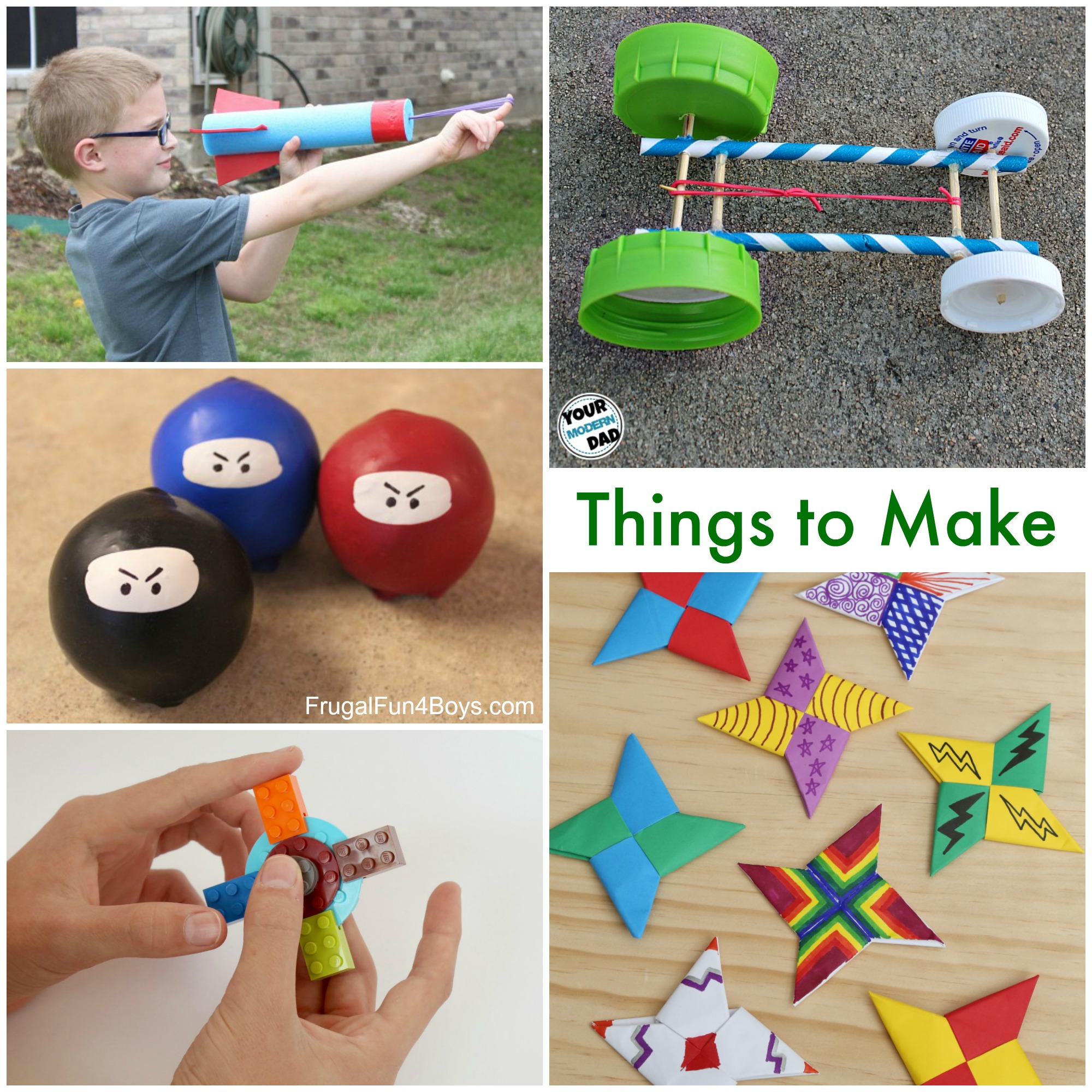 Build a rubber band powered car. This is a great project idea from Your Modern Dad. Uses materials from around the house.

Grab some balloons and make some Ninja Stress Balls. Squeeze and squish them!

Use craft sticks to make exploding stick bombs. These hold together with pressure and then explode with your throw them. (Don’t worry, they’re not dangerous!)

Make a Duct Tape Wallet. These are fun to make, and they last a surprisingly long time.

Build the largest possible LEGO building using as many bricks as you can. Or build a whole city with houses and buildings.

Make some Star Wars paper crafts. We enjoyed making some that we printed from Cubee Craft.

Or do some Star Wars origami. The post has video instructions. The X-Wing is awesome.

Learn how to make balloon animals. There are tons of tutorials on Pinterest!

Draw your own comic book. Make your own pages, or print these templates to get started. What hero will you create?

Turn a pool noodle into a Rocket Flinger Toy. This is a fun project to do with a group because the supplies are super cheap.

Build an Awesome Water Balloon Launcher. So. much. fun! Get lots of balloons!

Fold some Paper Ninja Stars. These are fun to make and decorate. Fold a whole collection of them!

Here are some fun science projects to do with materials from around the house. 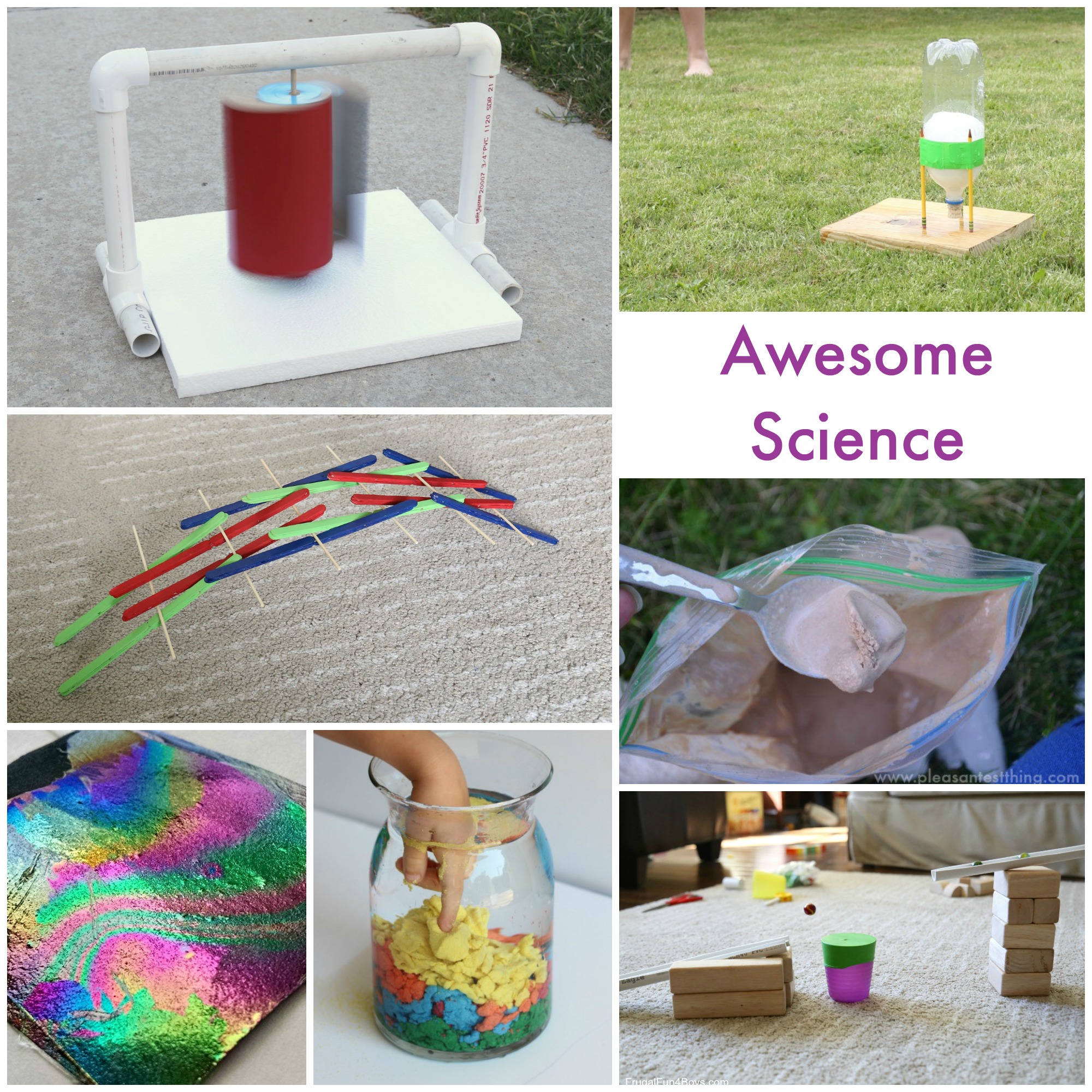 Use craft sticks to build an exploding chain reaction. Once you learn how to do it, it’s loads of fun. Video your chain reaction going off, because you’ll want to watch it again!

Build a self-supporting da Vinci bridge out of popsicle sticks. This is a neat engineering project because the bridge doesn’t require any glue or tape to hold together.

Make a harmonica out of craft sticks. It makes a cool noise, and you can change the pitch of the sound.

Use a tissue box and pencils to build a catapult. Then shoot projectiles across the house!

Launch an Epic Bottle Rocket. Ours flew higher than our two story house.

Marble Trampolines. Build a marble run with little “trampolines” for the marbles to bounce on. (Use cups and balloons for the trampolines – so fun!)

Grow some amazing crystals. Fun idea from Babble Dabble Do.

Learn to identify rocks and fossils. Go rock hunting, and then check out a rock guide from your local library and try to identify them. Here’s a pocket Rock and Mineral Guide on Amazon as well.

Build a working wind turbine from a cardboard coffee can. It’s fun to watch it spin in the wind!

If you’re looking for LEGO building projects, you can browse through all of our LEGO ideas. We have tons!

Or browse through all of our Things to Make and Do. 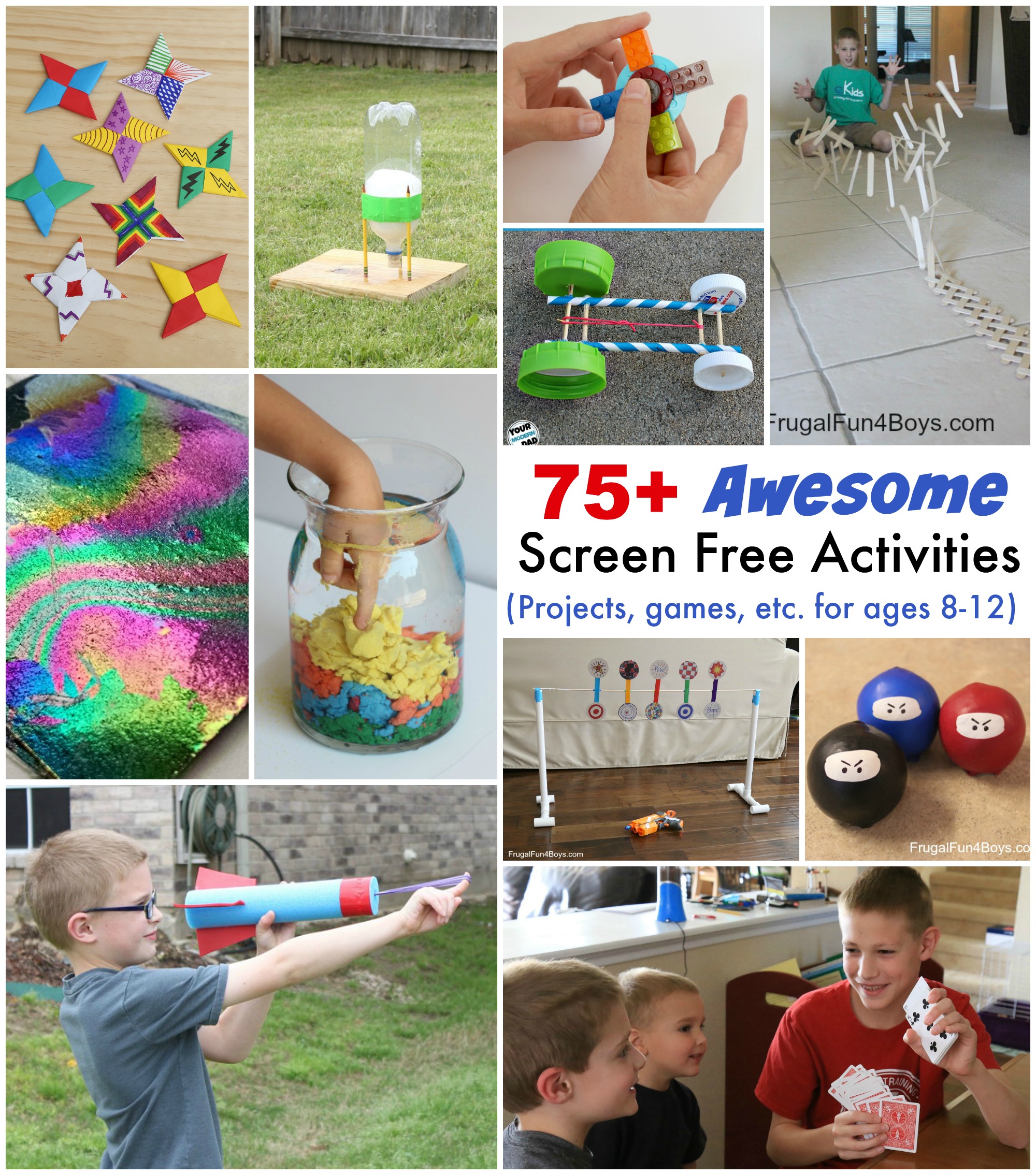